Grace Tame has claimed she doesn’t have a friendship with Anthony Albanese as she shared the text she sent to Australia’s new leader just hours after his victory.

The 2021 Australian of the Year on Monday said she isn’t necessarily a Labor supporter but was glad the Coalition and its ‘deception’ no longer held control.

Studio 10 host Sarah Harris asked the advocate if she had spoken to Mr Albanese since his win and noted the pair seemed to share a ‘nice friendship’.

‘I wouldn’t say its a friendship, these people are politicians. I sent him a message just to echo what I said publicly,’ Ms Tame replied.

‘That the nation is crying with you. I think it was a lot of relief, more so to be free of the deception that we were exposed to, that we were in the grips of, in the hands of the previous government, which I had first-hand experience of.’

Her comments come after the 27-year-old spoke to Mr Albanese for an article in InStyle Australia.

The pair have also cosied up together while posing for photos at several high profile events. 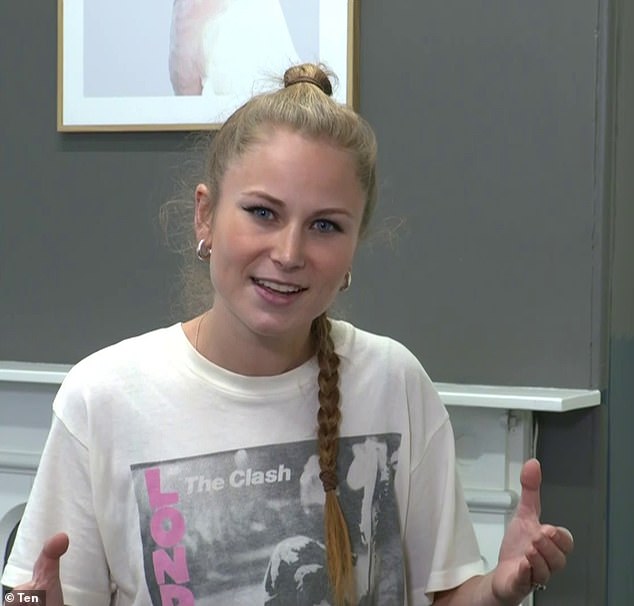 On Monday, Ms Tame also said she text Mr Albanese just hours after his triumphant victory over Scott Morrison’s Coalition and said: ‘The nation is crying with you’.

It followed a similar message she tweeted just after midnight on Saturday when she wrote: ‘A grateful nation is crying with you. And who said I didn’t smile at the prime minister?’ alongside a photo of her with Australia’s new leader.

Ms Tame later said she would like to see a distancing from the two-party system in Australia and applauded the host of newly-elected independents.

‘It’s not necessarily he (Mr Albanese) who was my preferred Prime Minister… what Anthony Albanese does in terms of action is remains to be seen,’ she explained.

‘The hope is that that these commitments – implementing the entirety of the [email protected] report and action on climate change are carried out with the cooperation of these independents.

‘It’s not just about Labor, about Anthony Albanese, it’s about a very different system of government, of leadership where we have diversity, because I think that actually best echoes Australia, diversity.’

She told Channel 10 she was ‘humbled’ by former foreign minister Julie Bishop’s comments that she played a part in Mr Morrison’s defeat at the polls.

‘(Liberal women) did not see their concerns and interests reflected in a party led by Scott Morrison in coalition with Barnaby Joyce,’ Ms Bishop previously said.

Female ‘teal’ independent candidates, who ran on a platform of equality, climate policy, and a federal corruption watchdog, snatched seats away in Liberal strongholds such as Wentworth.

‘The impact of Grace Tame and Brittany Higgins, they changed the narrative… That resonated with women,’ she said. 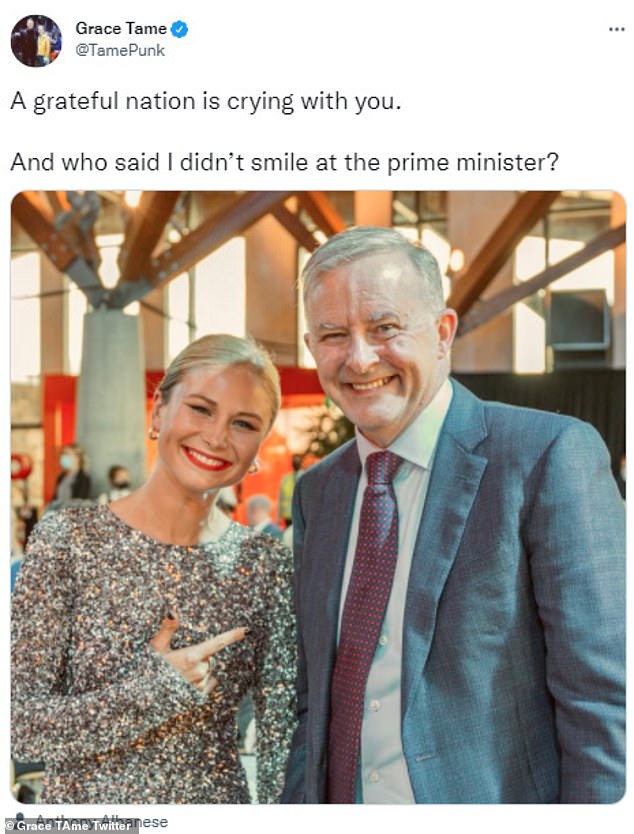 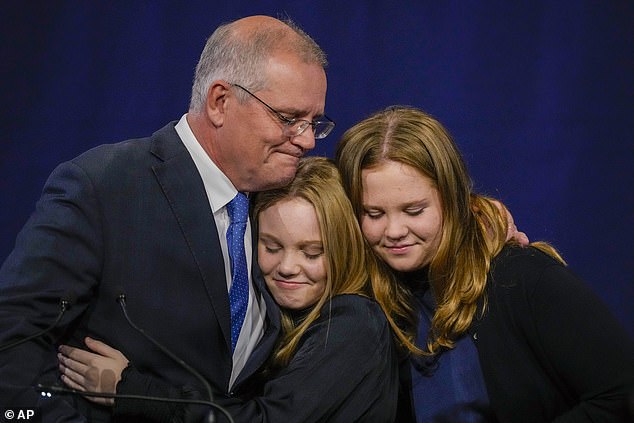 Former conservative MP Julie Bishop said Mr Morrison and the Coalition lost the election largely due to a failure to resonate with women voters (pictured: MR Morrison with daughters Lily and Abbey on Saturday)

The fierce advocate for survivors of sexual assault also shot down a suggestion from the hosts that she could make a political run herself.

‘I have no interest in it. I have always maintained my independence and I am a longtime swing voter. I believe in agitating from the outside,’ she said.

‘Politics… people go in with a lot of ambition and a lot of good intention but it is a slow process from what I can see.

‘Lots of back-and-forth, two steps forward one step back. And in a lot of cases they have to compromise to get things done.

‘You have to work with people you don’t necessarily agree with, that’s what makes a robust and healthy democracy.

‘But I believe in agitating from the outside. I would rather be on the outside and work and co-operate with these people.’ 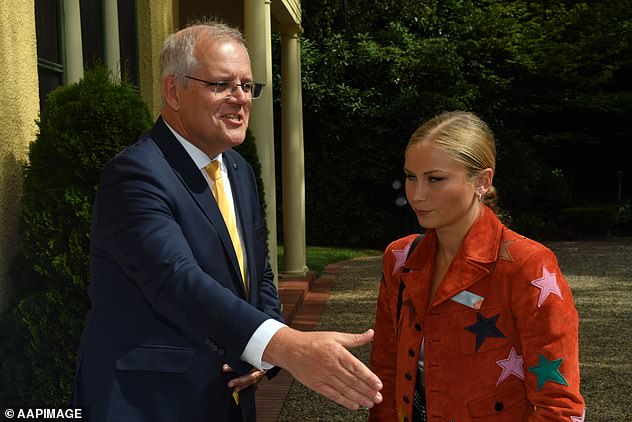 About a month ago, Ms Tame interviewed Mr Albanese for InStyle Australia.

Mr Albanese candidly shared the tough decision his mother had to make when she fell pregnant out of wedlock in the 1960s, as it was ‘the fashion of the day’ that babies would not be kept by either parent.

‘The most important role model that I had was my mum,’ he said.

Mr Albanese said despite the challenges that lay ahead, his mother made the decision to raise him on her own and give him his father’s surname.

His father had told his mother that he planned to marry a woman from his Italian home town. 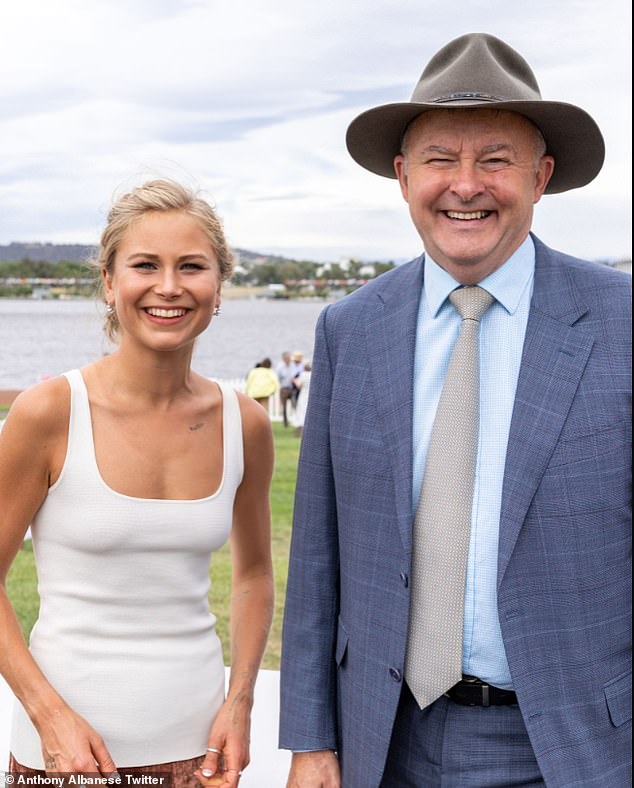 About a month ago, Ms Tame spoke to Mr Albanese (pictured together) for InStyle Australia in an interview in which she and her fiancé Max Heerey in tears

‘She was a strong woman who made the decision to have me, and to raise me by herself,’ Mr Albanese said.

‘She worked originally when I was a bub, cleaning office buildings at night, looking after me during the day, she then had rheumatoid arthritis and was really crippled up.’

He said their two person family, ‘just me and her’, was ‘particularly close’.

‘It’s one of the things that has focused me and (is) a part of who I am,’ he explained.

‘She always respected everyone and I grew up with the confidence of having a mum who lived a lot of her aspirations through me. She couldn’t work. And so she’s the most important role model in my life and she’s very much still part of who I am today.’ 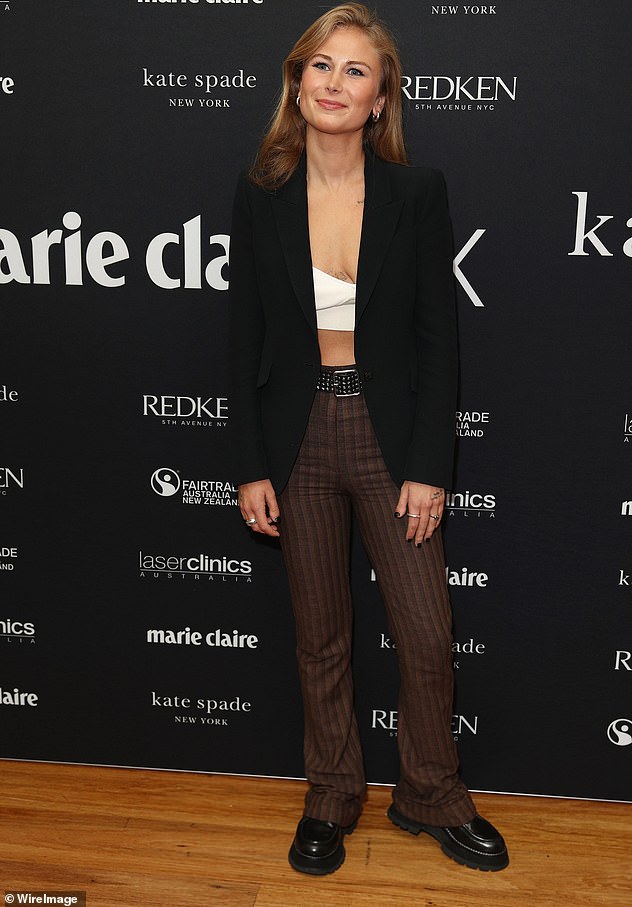 ‘Sorry, I didn’t mean to upset you there,’ Mr Albanese told her.

Ms Tame said she started crying because she respected his answer ‘so much’.

‘So when, like, the marriage equality debate was on, for example, and one of the things that some of the opponents said was, you know, you need a mum, a dad and two kids — that’s a family,’ he said.

‘I hear that message and go, well, hang on, you know, families are diverse and made up of all sorts of different groups.’