The Tribeca Festival, which opened on June 8, is winding down its last few days before wrapping up on Sunday, June 19.

On Friday, the acclaimed crime drama Heat (1995) was among the films to be featured in the Retrospective Screenings segment of the festival.

Its two leading men, Robert De Niro and Al Pacino, were on hand to talk about the making of the movie, written and directed by Michael Mann, and to attend a screening of a 4K version of the film at United Palace Theater in New York City.

Heat actually marked the first-ever appearance of Robert De Niro and Al Pacino together in the same scene. 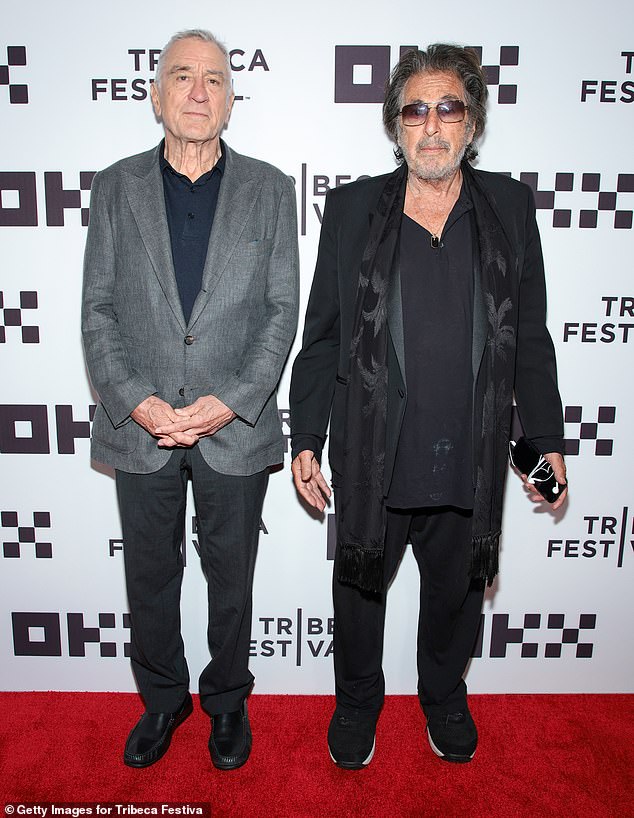 Retrospective Screening: Robert De Niro, 78, and Al Pacino, 82, hit the red carpet ahead of a special screening and conversation about their acclaimed film Heat (1995) at the Tribeca Festival in New York City on Friday

The two longtime leading men hit the red carpet ahead of the showing of the 4K version, which is actually a higher quality of video than HD.

Never one to be all that comfortable with media events like this, the Raging Bull actor chatted a bit as he stood next to Pacino, who was decked out in his trademark black.

On this day, he sported slacks with a blazer over a long t-shirt, which was rounded out with a black scarf around his neck. 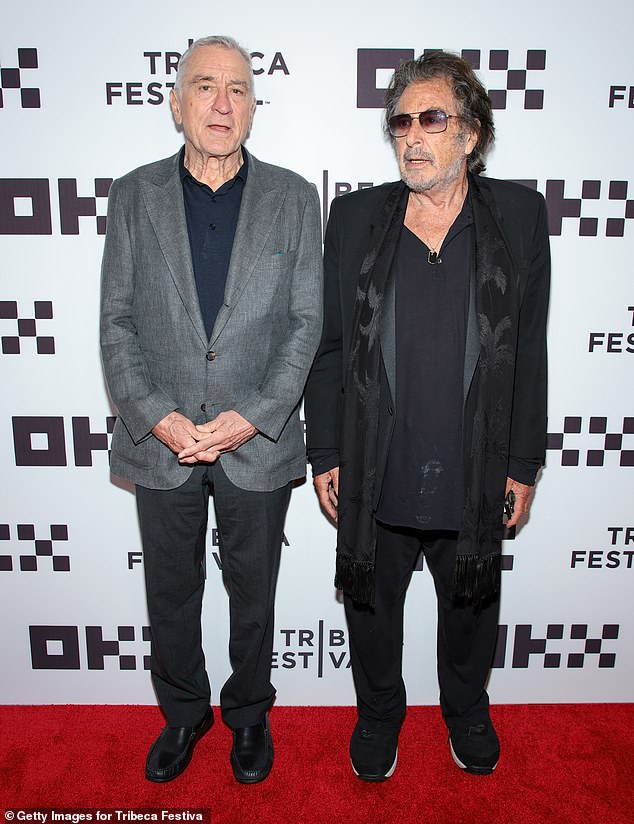 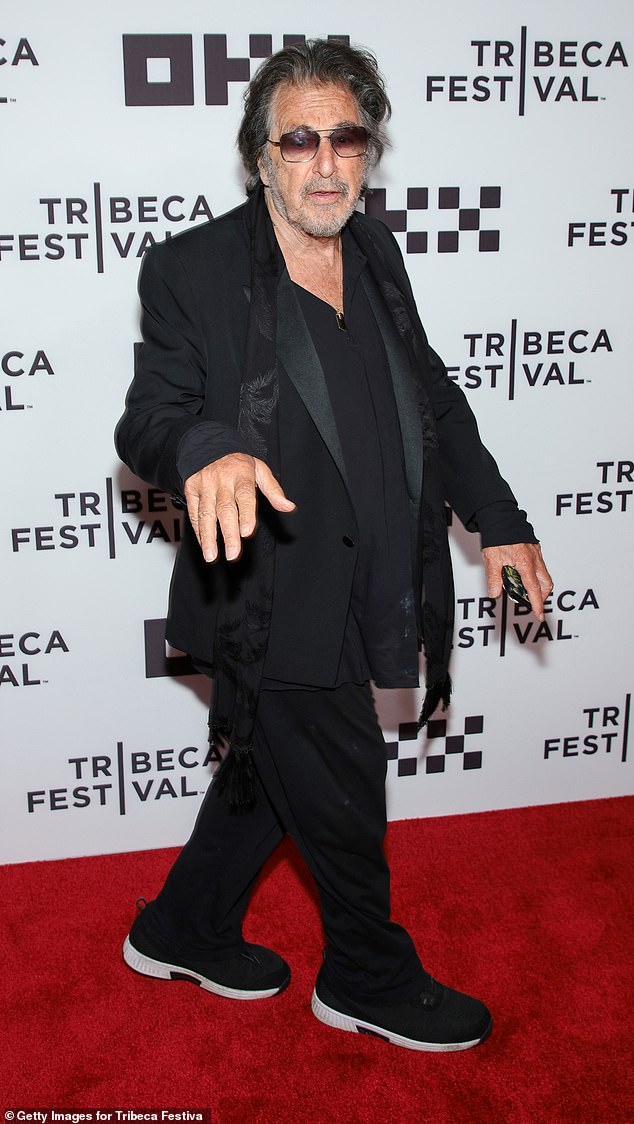 Icon: The Godfather actor showed off his charm and charisma on the red carpet decked out in his trademark black ensemble that’s almost always capped off with a scarf around his neck 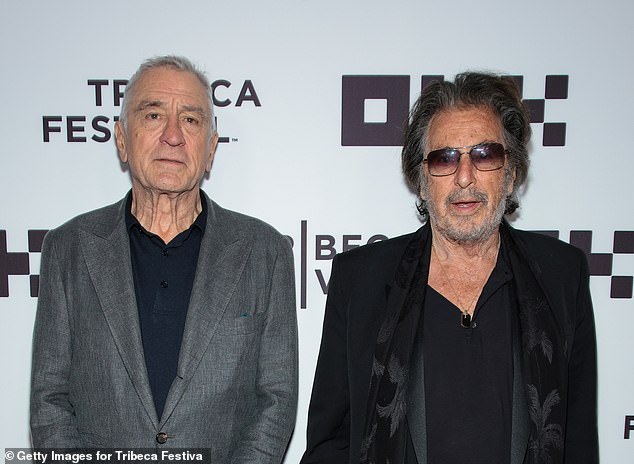 Their history: While the two leading men starred together in The Godfather Part II (1974), they never had any scenes together because De Niro played a young version of Vito Corleone for the prequel segment of the classic mafia film 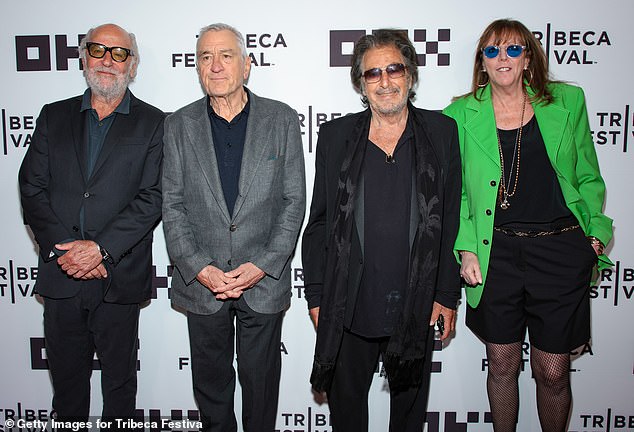 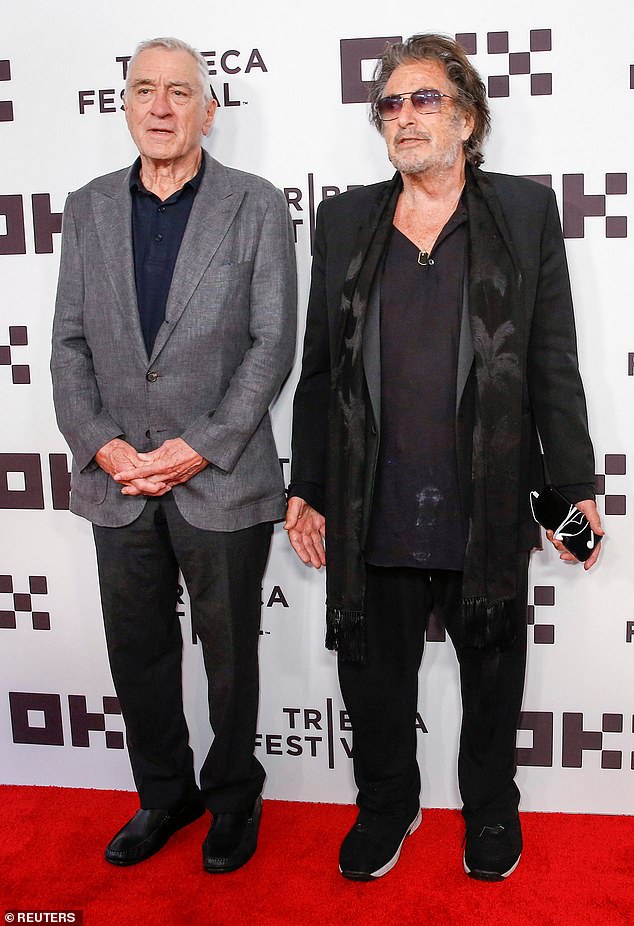 Icons of heir crafts: De Niro and Al Pacino are revered as among the great leading men of film

As one of the Retrospective Screenings at the festival, De Niro and Pacino also stepped on stage to chat about the crime drama.

Film producer Art Linson, who co-produced Heat with Michael Mann, also joined the two Hollywood legends on stage to give some added insight, while journalist and filmmaker Bilge Ebiri served as the moderator.

Of course, the conversation would eventually turn to the ultimate first screen meeting between the two stars when Pacino, as obsessive police Lieutenant Vincent Hanna, sat across a restaurant table from De Niro, who portrays professional bank robber Neil McCauley. 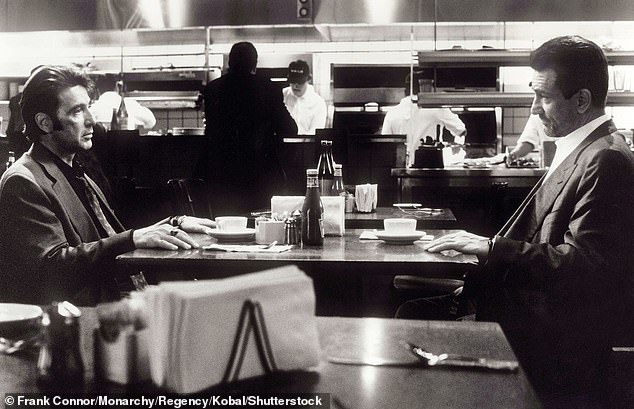 Iconic first-ever scene together: The chat eventually turned to the first screen meeting between the two stars when Pacino, as obsessive police Lieutenant Vincent Hanna, sat across a restaurant table from De Niro, who portrays professional bank robber Neil McCauley 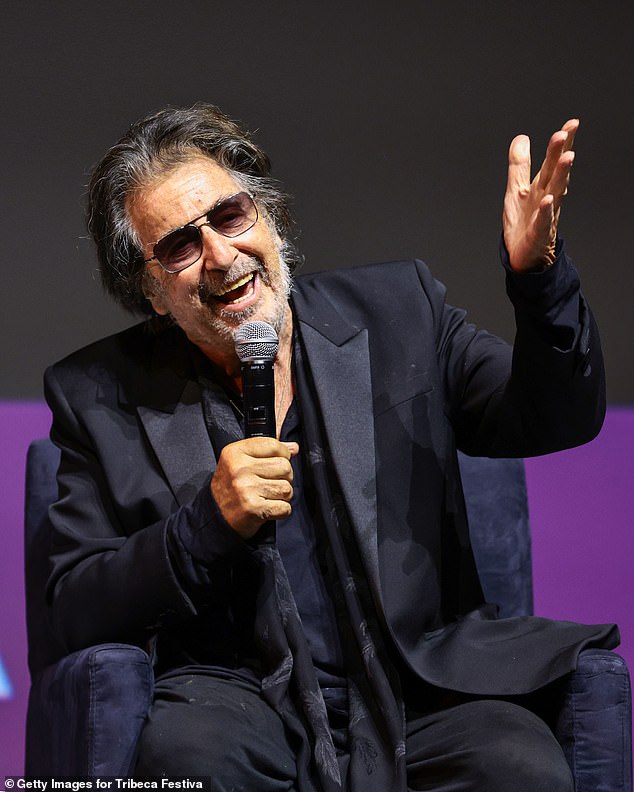 Let’s do it again: Pacino has admitted that initially, he wasn’t satisfied with the table scene and asked to do extra takes of the pivotal meeting between their two characters 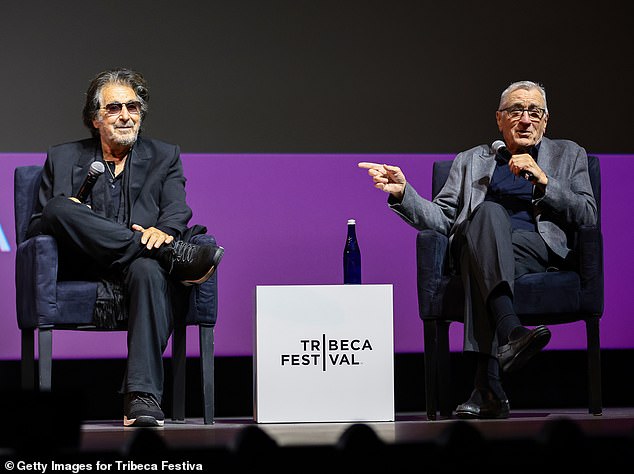 ‘Take 11′: Michael Mann has previously revealed that most of the stars’ first-ever scene at the restaurant table was the 11th take 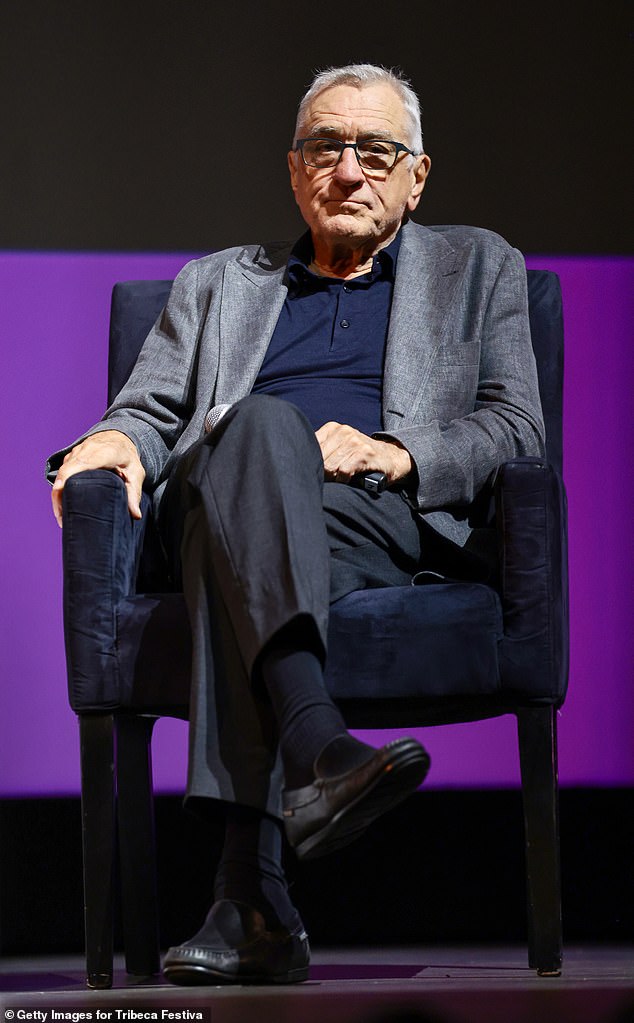 Bonafide hit with critics and fans alike: Heat grossed more than $187 million at the box office on a $60 million budget

In a previous interview, Mann confessed that he did extra preparations for the scene, setting up over-the-shoulder cameras on each actor and a third camera shooting a profile (which was never used). Then he shot everything.

‘Most of the scene was take 11,’ Mann recalled during a reunion at the Academy of Motion Pictures Arts and Sciences in 2017, as reported by USA Today. ’20 years later I can remember it’s take 11.’

Pacino would go on to admit that he still wasn’t satisfied: ‘I’d like to do it again.’ 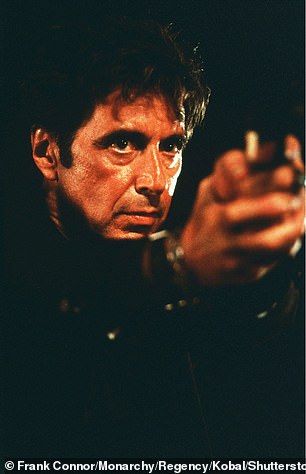 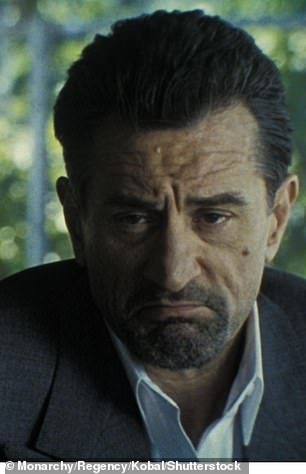 Showdown: In Heat, Pacino plays a cop on the hunt for De Niro, who a life-long thief 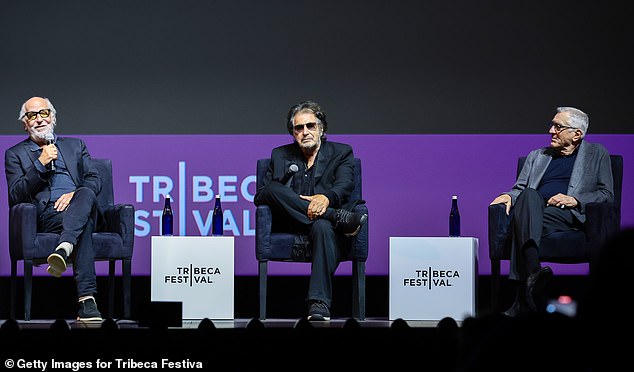 Deadly vows: At the end of the legendary restaurant scene, the two characters exchange deadly vows, pledging to kill the other in the outside world if the moment comes 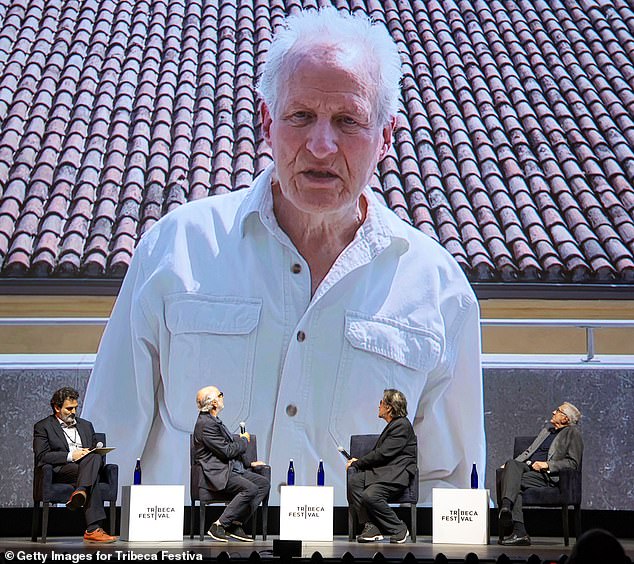 Thinking back now, the actor revealed that his ‘memory of it is good,’ adding, ‘When I think about it, I feel good. And when I see it, I feel good, too.’

Although it did not receive any major award nominations, Heat is regarded as one of the most influential films of its genre and has inspired several other works.

It went on to gross more than $187 million at the global box office on a $60 million budget. 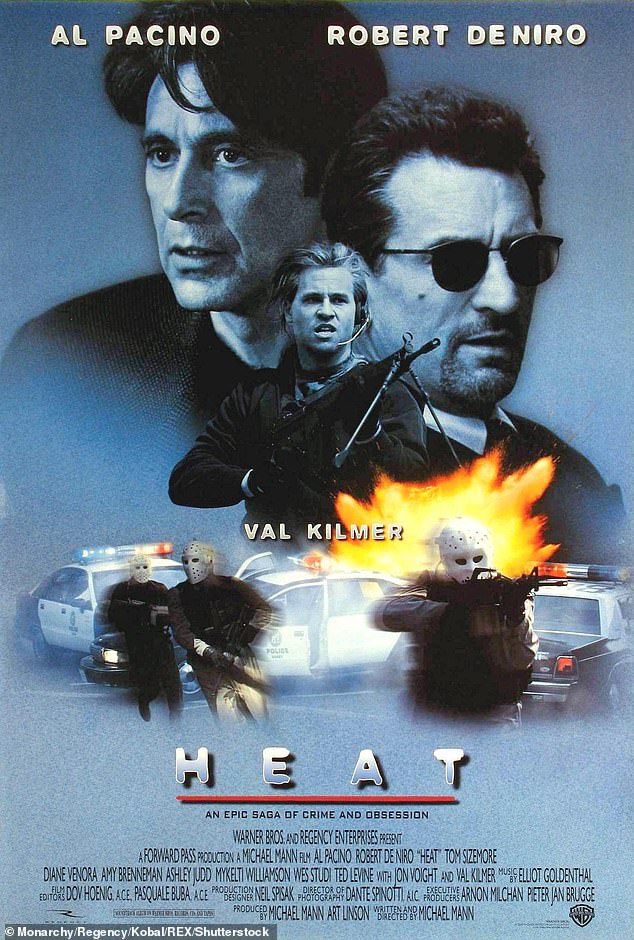 Classic: Although it did not receive any major award nominations, Heat is regarded as one of the most influential films of its genre and has inspired several other works