Highly embarrassing footage an Aussie Hells Angels bikie is DESPERATE for you not to see: Underworld figure hysterically fakes an injury while being arrested – before ‘weeping’ in the back of a cop car

A bikie slapped with cuffs for assaulting his wife tried desperately to have the video of his arrest kept secret, fearing the comical clip would be ‘highly embarrassing’.

The police bodycam footage shows Hells Angel member Mustafa Hafizi, 34, handcuffed and led outside of his Greystanes home in western Sydney on December 29, 2021.

But the underworld figure with links to the Alameddine crime family begins screaming hysterically and complaining that officers are hurting his shoulder before falling to the ground and telling officers he will ‘sue’ them.

He was taken to Parramatta Police Station were he was charged with assaulting his wife and resisting arrest.

Hafizi pleaded guilty to assaulting his partner but not guilty to resisting officers commands claiming the pain and injury was genuine.

However, Magistrate Rodney Brender rejected the argument agreeing with officers that it was an ‘Oscar-worthy’ performance. 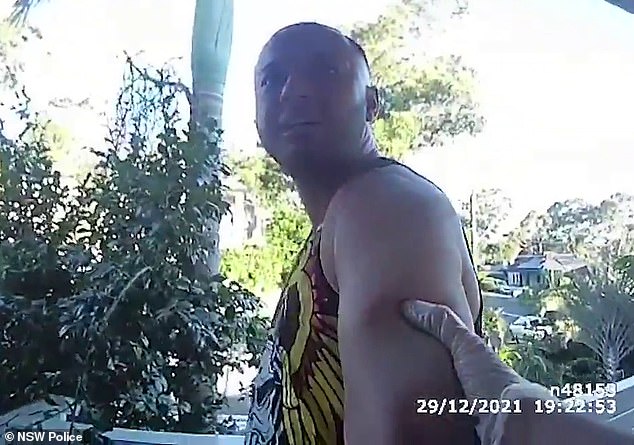 The police bodycam footage shows Hells Angel member Mustafa Hafizi, 34, handcuffed and led outside of his Greystanes home in western Sydney on December 29, 2021

‘I need to f**king lock my house,’ Hafizi yelled at police while being escorted out the door.

Officers refused and continued to guide Hafizi down the steps from his front door to his backyard.

‘Don’t assault me or I’ll sue you,’ Hafizi threatened the officer.

Just as the policeman began to tell Hafizi’s he was not being assaulted, the gangster took the dive.

‘Ah! My shoulder! My f**king shoulder! You f**king assaulted me,’ Hafizi screamed while writhing on the drive way.

He then repeatedly shouted plans to sue the arresting officers and told them he can’t relax because he has ‘anxiety’. 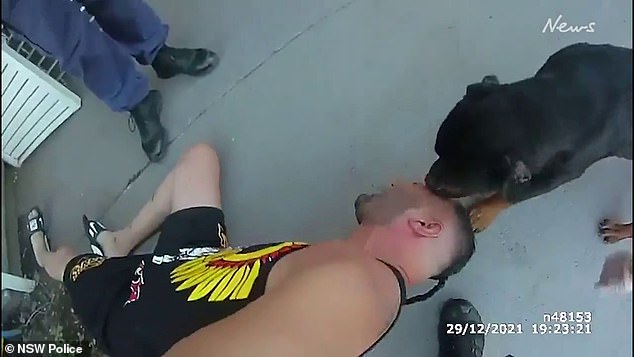 Hafizi yelled his shoulder was injured and that he was going to sue police for ‘assaulting’ him during his arrest last December (pictured, Hafizi on his driveway during the arrest)

‘You’re getting f**ked, all my cameras are recording, pushing me down the stairs like I’m a f**king criminal,’ Hafizi yelled before an officer congratulated him on his ‘Oscar worthy performance’.

Eventually police got tired of delaying the arrest and picked Hafizi up by his arms and carried him to the police car while he screamed protests.

Officers stuffed Hafizi in the back of the van where the alleged Hells Angel began ‘weeping’ and crying out that his shoulder was injured.

Witnesses reported seeing Hafizi put weight on his ‘injured’ shoulder with no reaction after the incident.

The Daily Telegraph reports Hafizi fought tooth-and-nail to stop the publication from sharing the ’embarrassing’ footage, arguing it could put him in danger. 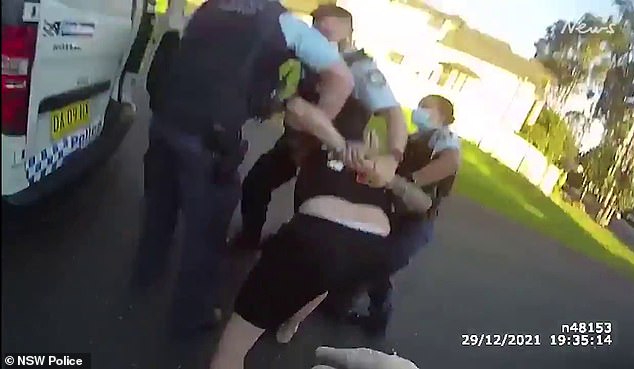 Officers stuffed Hafizi into the back of the police van (above) where he yelled they were hurting his shoulder, despite witness testimony he later used the shoulder without complaint

However, Magistrate Rodney Brender dismissed the claims and noted Hafizi said in the video he was filming the incident himself.

‘The accused knew he was being filmed, he said he was also filming … open justice dictates the video be made available,’ he said.

‘I reject the suggestion that the police deliberately pushed him down stairs, it’s not supported by the evidence,’ Magistrate Brender said.

‘It was either an accidental trip or a deliberately staged fall, I do not need to decide which.’

Hafizi was found guilty and copped a $500 fine and a 12-month community correction order.