Today, the biggest and finest clubs in Europe take pride in being part of a competition that is considered the most watched, followed and glamorous in the world, The UEFA Champions League. However, competitions among Europe’s elite clubs didn’t just start overnight.

The journey started as far back as 1897 when the Challenge Cup was founded as a club competition between clubs from the Austro-Hungarian Empire and it ran until 1911, when the last winner, Wiener Sportclub, retained the trophy.

The Challenge Cup is considered to be  the forerunner of the first Pan-European Club competition; the Mitropa Cup which started after the collapse of the Austro-Hungarian Empire at end of World War 1. The competition was first played in 1927. There was another club competition played by League Champions from Italy, Spain, Portugal and France at the end of the season as a mini-competition. It was called the Latin Cup.

The birth of the European Cup came when French journalist, Jacques Ferran covered South America’s biggest clubs competition, Campeonato Sudamericano Campeones in Santiago, Chile. Fascinated by the prestige and organization of the continental championship for South American Clubs, he submitted the idea to Gabriel Hanot, the editor of French newspaper, L’Equipe.

Hanot started writing proposals to UEFA who at the time only organized European National Teams Competition. The UEFA Congress of March 1955 deliberated on Hanot’s proposal and approval was granted in April of that year with the kick off slated for the start of following football Season. The UEFA document on the history of the European Cup affirms that Jacques Ferran and Gabriel Hanot, journalists for the French sports newspaper, L’Equipe, were the founding fathers of the European Cup.

In the first ten years of the competition, Real Madrid dominated the European Cup winning five trophies consecutively from the onset with the likes of Alfredo de Stéfano, Francisco Gento, Ferenc Puskas and José Santamaría. It was a relatively easy run for Real Madrid although they faced some competition from clubs like AC Milan, Fiorentina and Stade de Reims who got to the finals twice.

Benfica, with the likes of the legendary Eusebio and Mario Coluna halted Madrid’s dominance between 1961 and 1962. The Portuguese club defeated Barcelona 3-2 in 1961 and Madrid in 1962 in Amsterdam. The Milan Clubs also had their fair share of European glory between 1963-1965 when AC Milan defeated Benfica in the final of 1963 and Inter went past Real Madrid and Benfica in 1964 and 1965 respectively. Before the end of the 1960s, Real Madrid reclaimed the title in 1966.

The 1970s saw the emergence of “Total Football”. Rinus Michels, the coach of a young and energetic Ajax side that had Johan Cruyff, Johan Neeskens among others had Ajax dominating the European scene dispatching Panathinaikos, Inter Milan and Juventus in successive finals between 1971-1973, although Feyenoord began the Dutch dominance earlier on with a 2-1 victory over Glasgow Celtic.

Bayern Munich won a consecutive hat trick of the European competition in the mid-1970s. Franz Beckenbauer, Sepp Maier, Gerd Müller, Uli Hoenes and Paul Breitner led the victories on Atletico Madrid, Celtic and Saint-Etienne, after which Bayern went on a downward spiral in Europe for twenty-five years before winning another European trophy.

English dominance in the European competition started towards the end of the 1970s with Liverpool winning the competition consecutively in 1978 and 1979. They also won it in 1984. Nottingham Forest, coached by the enigmatic Brian Clough, came into the mix with consecutive titles in 1980 and 1981 as well as Aston Villa in 1982. The English dominance ended in 1985 when Liverpool lost to Juventus in the final.

Towards the end of the 1980s, the world witnessed the brilliance of Arrigo Sacchi who led AC Milan to consecutive trophies with the likes of Marco van Basten, Ruud Gullit, Frank Rijkaard, Franco Baresi, and Paolo Maldini among others. Barcelona, with Johan Cruyff as manager, tasted European victory for the first time at Wembley before the birth of the present format.

Ghana-born French star Marcel Desailly won consecutive trophies with different clubs (Marseille and AC Milan) in 1993 and 1994 respectively after the competition was renamed the UEFA Champions League. Sandwiched in the midst of a successful era for Italian sides in the 1990s was the youthful Ajax Amsterdam under Louis Van Gaal that defeated AC Milan in 1-0 1995 with the likes of Edwin van der Sar, Frank de Boer, Ronald de Boer, Edgar Davids, Clarence Seedorf, Marc Overmars, Patrick Kluivert and Nigeria’s duo of Nwankwo Kanu and Finidi George.

From the mid-1990s to the early 2000s, a new winner emerged in Borussia Dortmund, Real Madrid picked up yet another trophy in 1998 and Manchester United signed off the 1990s with a treble under Sir Alex Ferguson.

La Liga teams proved their worth in the early 2000s with Real Madrid winning the competition and Valencia appearing in successive finals. In 2004, Jose Mourinho led FC Porto to Champions League glory after winning the UEFA Cup the previous year.

English resurgence in the Champions League began again in 2005 in dramatic fashion as Liverpool overturned a 3-0 deficit to win the trophy against Milan, Arsenal got to the final in 2006 but lost to Barcelona, Liverpool did return to the final in 2007 but AC Milan got their revenge this time.

For the first time, the world witnessed an all English final in 2008 as Manchester United won against Chelsea in Moscow via penalties. Manchester United would get to two more finals in the next three seasons but from 2008 when United won their most r Champions league title, the Spanish giants have reigned supreme.

Pep Guardiola led Barcelona to two Champions league successes in four seasons, getting the club into the semifinals on the other two occasions they did not win. In between that run, Jose Mourinho also moved to the Spanish capital to help Real Madrid to three semifinals in a row. Real Madrid secured their 10th European success in 2014, popularly called La Decima. Then, Barcelona  grabbed the title again in 2015.

In what became a battle of Spanish supremacy on the European scene, Real Madrid again wrestled the title off Barcelona in 2016 and, being led by their former player, Zinedine Zidane, went on to win it a further two seasons on the bounce, a feat unmatched since the same club did it in the old European Cup.

For the first time in three years, the Champions League will have a new winner aside from Real Madrid. And perhaps this year’s final might be a preamble to another era of dominance by English teams as Liverpool and Tottenham Hotspur clash in the 2019 final at the Wanda Metropolitano Stadium in Madrid on June the 1st.

Looking at some statistics, Real Madrid have the most titles with thirteen, followed by AC Milan who have seven while Liverpool, Barcelona and Bayern Munich all have five apiece.

Cristiano Ronaldo is the all-time highest goal scorer in the competition, closely followed by Barcelona’s Lionel Messi. Both players have also won the competition a record five times. Bob Paisley with Liverpool, Zinedine Zidane with Real Madrid and Carlo Ancelotti with Milan and Real Madrid all have the most wins as manager, winning three times while the likes of Pep Guardiola, Jose Mourinho, Sir Alex Ferguson, Vicente Del Bosque, Arrigo Sacchi and Brian Clough all have two each.

The Champions league has grown to become Europe’s premier club football competition. Domestic cup titles and even league victories now play second fiddle in the minds of fans and on the priorities of club owners and managers. TV money has played a big role in the continuous growth and popularity of this prestigious competition. But for all of these, the competition is being threatened by the proposal of a possible breakaway Super League involving a large number of Europe’s super teams.

Will they make the move? Time will tell.

Daniel Amokachi scored the FIRST EVER UEFA Champions League goal but Finidi George and Nwankwo Kanu are the first Nigerians to win the trophy…. By…

Daniel Amokachi scored the FIRST EVER UEFA Champions League goal but Finidi George and Nwankwo Kanu are the first Nigerians to win the trophy…. By… 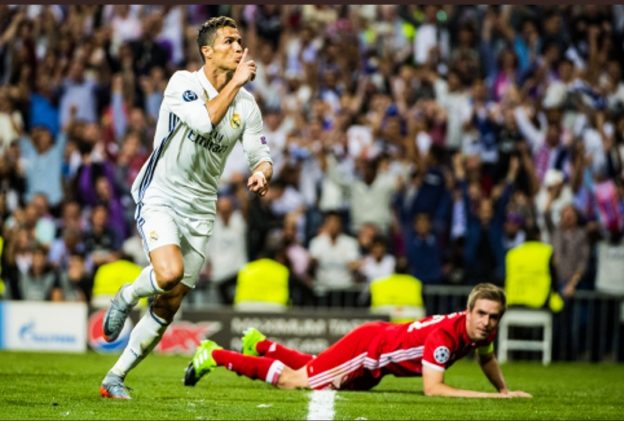 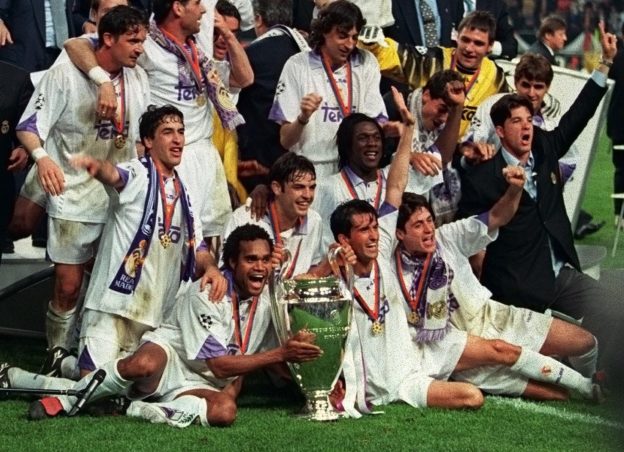 Real Madrid’s dominance in the Europe elite clubs tournament, the Uefa Champions League is no fluke as they are the most successful club side in… 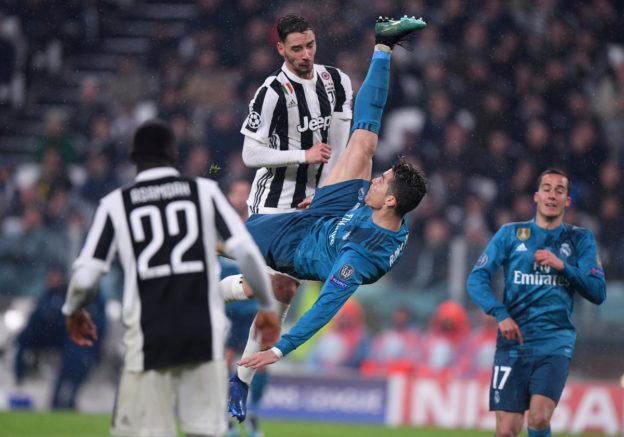