Ivana Trump’s sudden death at the age of 73 has shone a light on the impressive rise of Donald Trump’s former wife, from poor Czech immigrant to business tycoon.

Her success – fueled by a hefty $14 million divorce settlement – was so notable that she even landed a cameo role in 1996 movie hit The First Wives Club.

Ivana was born in the Czech city of Zlin in 1949, to electrical engineer father Miloš Zelníček and telephone operator mom Marie Zelníčková.

She was a prodigious skier. And it was that talent – encouraged by her father – the key to her escape from behind the Iron Curtain. 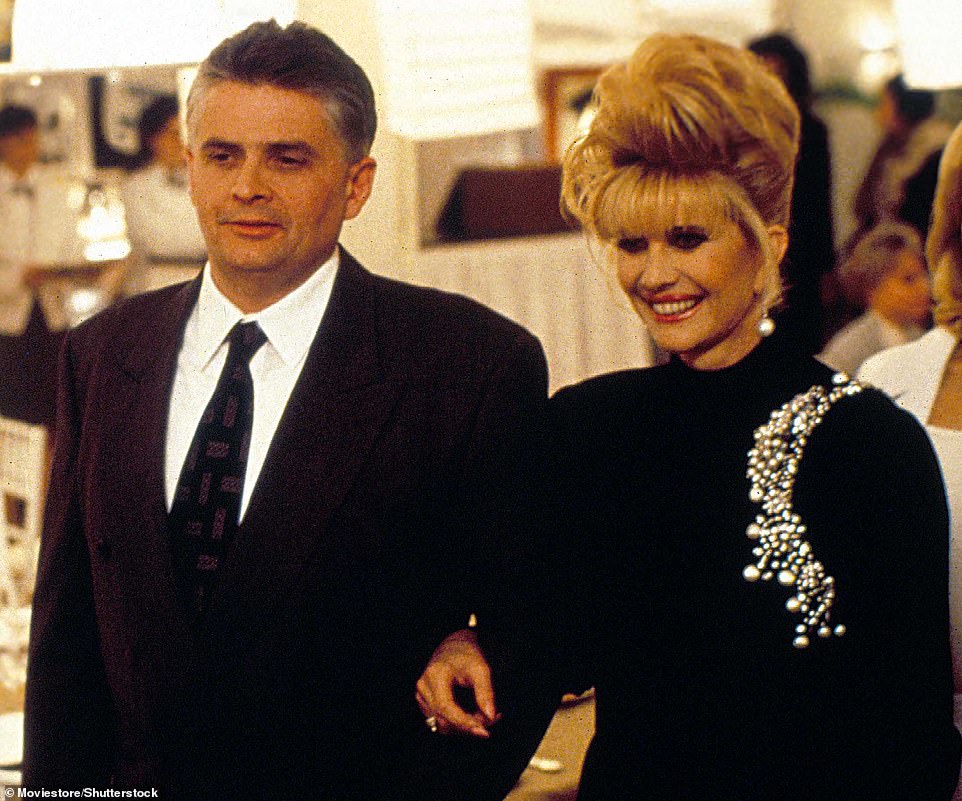 Ivana Trump’s amazing life took her from humble beginnings as a Czech skiing prodigy to one of the world’s best-known socialites who bagged a famous cameo in 1996 movie The First Wives club, which saw her poke fun at her divorce from Donald Trump 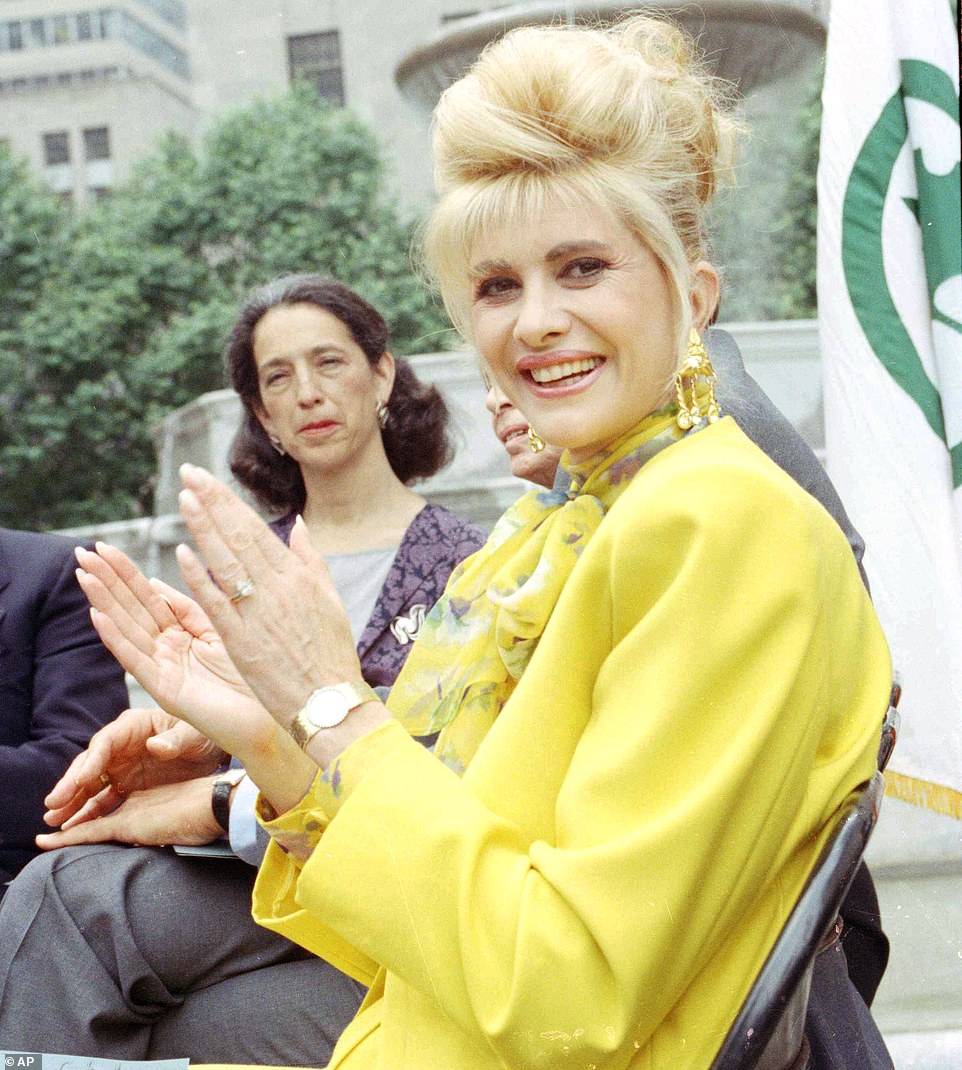 Ivana became manager of the Plaza Hotel while her husband owned the famous property, and is pictured outside the building in 1990

After marrying Austrian ski instructor Alfred Winklmayr – the first of her four husbands – Ivana was able to move to Canada in the early 1970s, where she worked as a ski instructor and model.

The sportswoman said she never considered modeling more than a temporary job.

But it ultimately led to her first meeting with Donald Trump during a booking in New York City in 1976.

That encounter helped propel Ivana to a life of unimaginable wealth and luxury – although she used her famed work ethic to turn her $14 million divorce settlement from Donald into an even greater fortune.

Rather than rest on her laurels during the Trumps’ tempestuous 15 year marriage, Ivana worked as executive vice president of interior design at the-then property mogul’s businesses.

That included overseeing the décor at Trump Tower in Manhattan – including its famed pink marble interior.

Ivana also oversaw construction of the Grand Hyatt Hotel in NYC, as well as the Trump Taj Mahal Casino in Atlantic city.

She later became the manager of New York City’s iconic Plaza Hotel, during Donald’s tenure as the property’s owner, from 1988 until after the couple’s divorce in 1995. 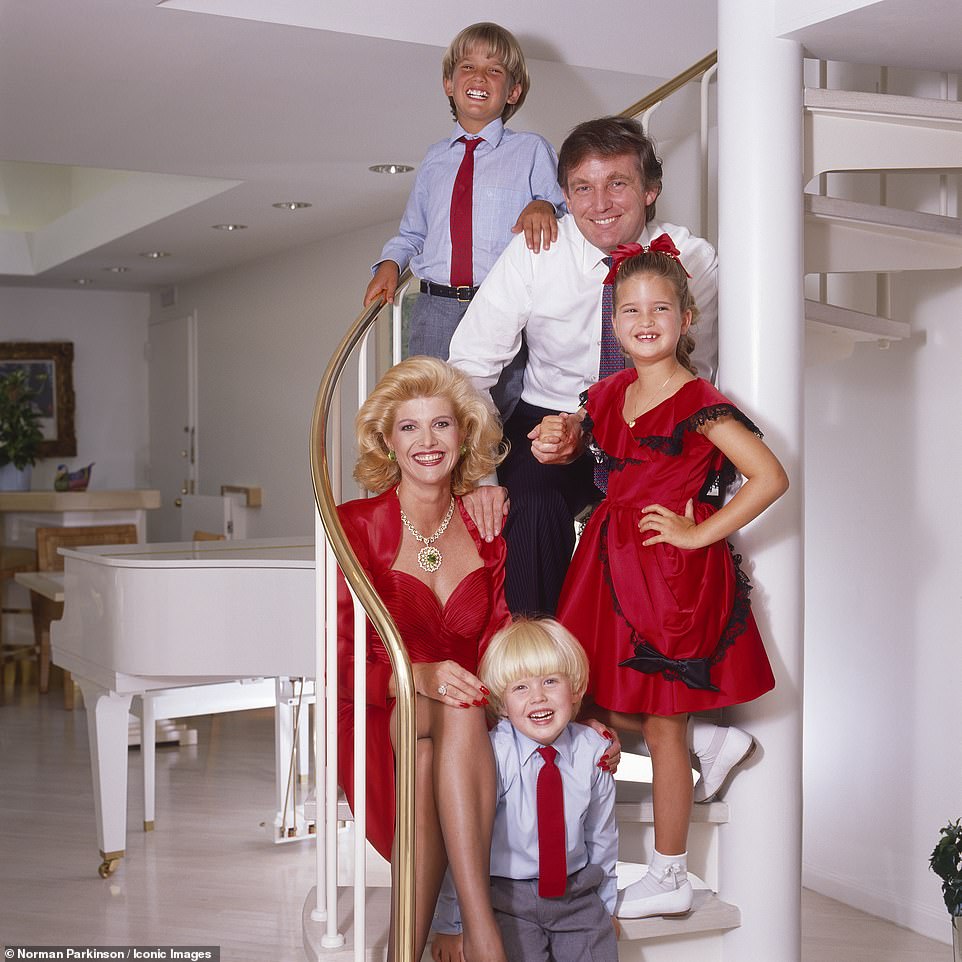 Ivana’s 1977 marriage to Donald helped propel her to fame and fortune. Rather than laze around and enjoy life as a trophy wife, she decided to oversee interior decoration at Trump’s properties (The Trumps are pictured with their three children Don Jr, Ivanka and Eric in 1986) 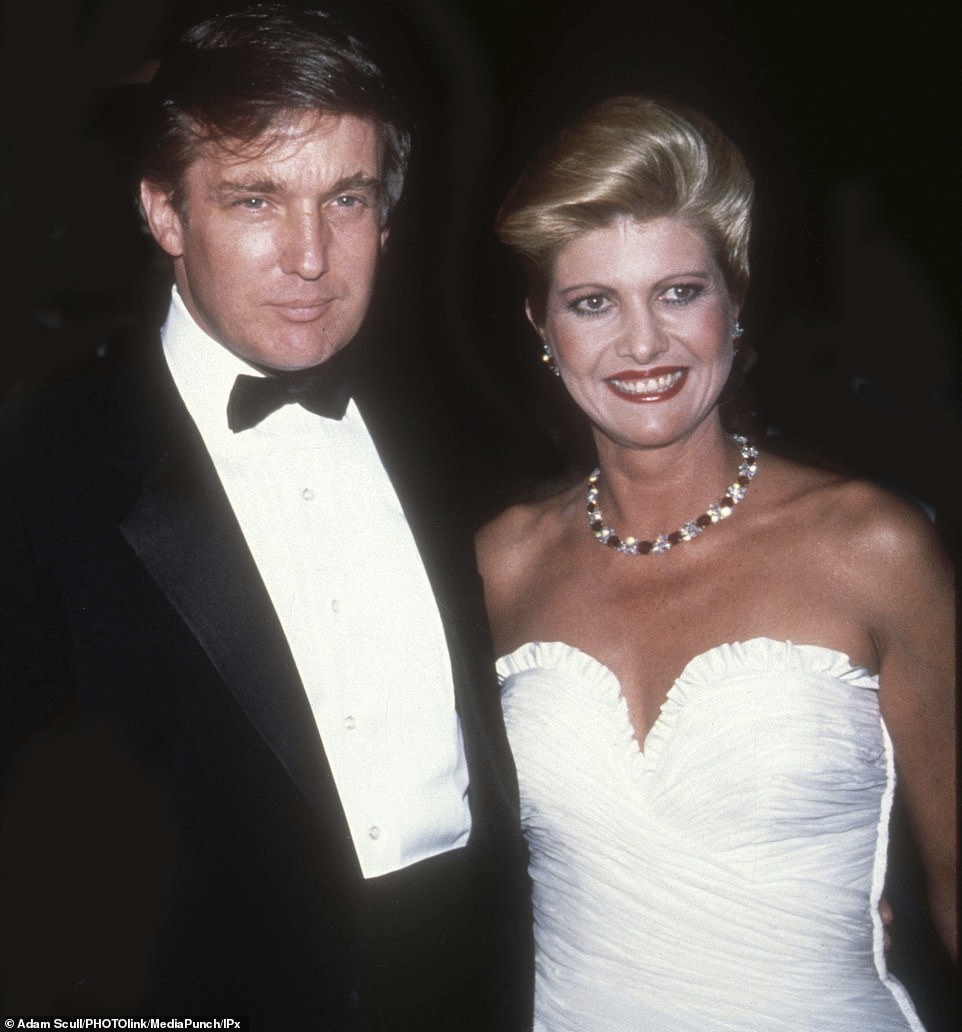 After the Trumps divorce was finalized in 1992, Ivana was handed $14 million in cash, as well as multiple properties – including a Connecticut mansion she later sold for $18 million

When Ivana’s marriage to Trump imploded in 1990, she was able to leverage a pre-nuptial agreement that had been updated four times during their marriage to secure what was then one of the biggest divorce settlements in history.

She pocketed the cash after the split was finalized in 1992.

As well as the $14 million lump sum, Ivana was also given a 45 room Connecticut mansion, an apartment at Trump’s New York Trump Plaza apartment complex.

She went on to sell the Connecticut mansion for $15 million in 1998, almost doubling her assets at a stroke.

Ivana was also granted the run of Trump’s Mar-a-Lago country club in West Palm Beach, Florida, for a month a year.

Despite the couple’s torrid divorce – triggered by Donald’s affair with Marla Maples, who became his second wife – they reunited for a pithy Pizza Hut advert in 1995 which mocked their own relationship.

The commercial saw the pair pretend to flirt on screen while implying that getting back together would be ‘wrong’ – before revealing that they were actually discussing eating pizza crust first.

And rather than enjoy settlement, Ivana set about building herself a business career to rival her former husband’s.

She designed multiple fashion lines inspired by her famously glitzy taste in clothes and jewels, which were sold on TV channels the Home Shopping Network and QVC.

Recognizing the power of her image, Ivana would herself appear on TV to sell her wares to viewers and make them feel as if a purchase would help give them a foothold into an enviable lifestyle like hers. 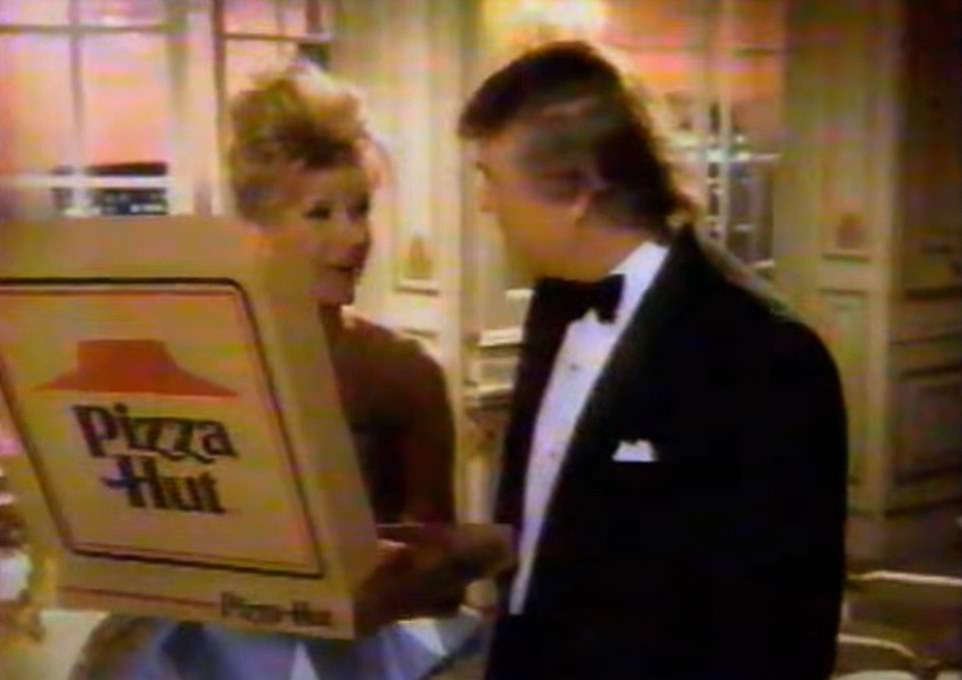 Despite divorcing in 1992, Donald and Ivana reunited in 1995 for a Pizza Hut commercial, which saw them poke fun of their tempestuous marriage 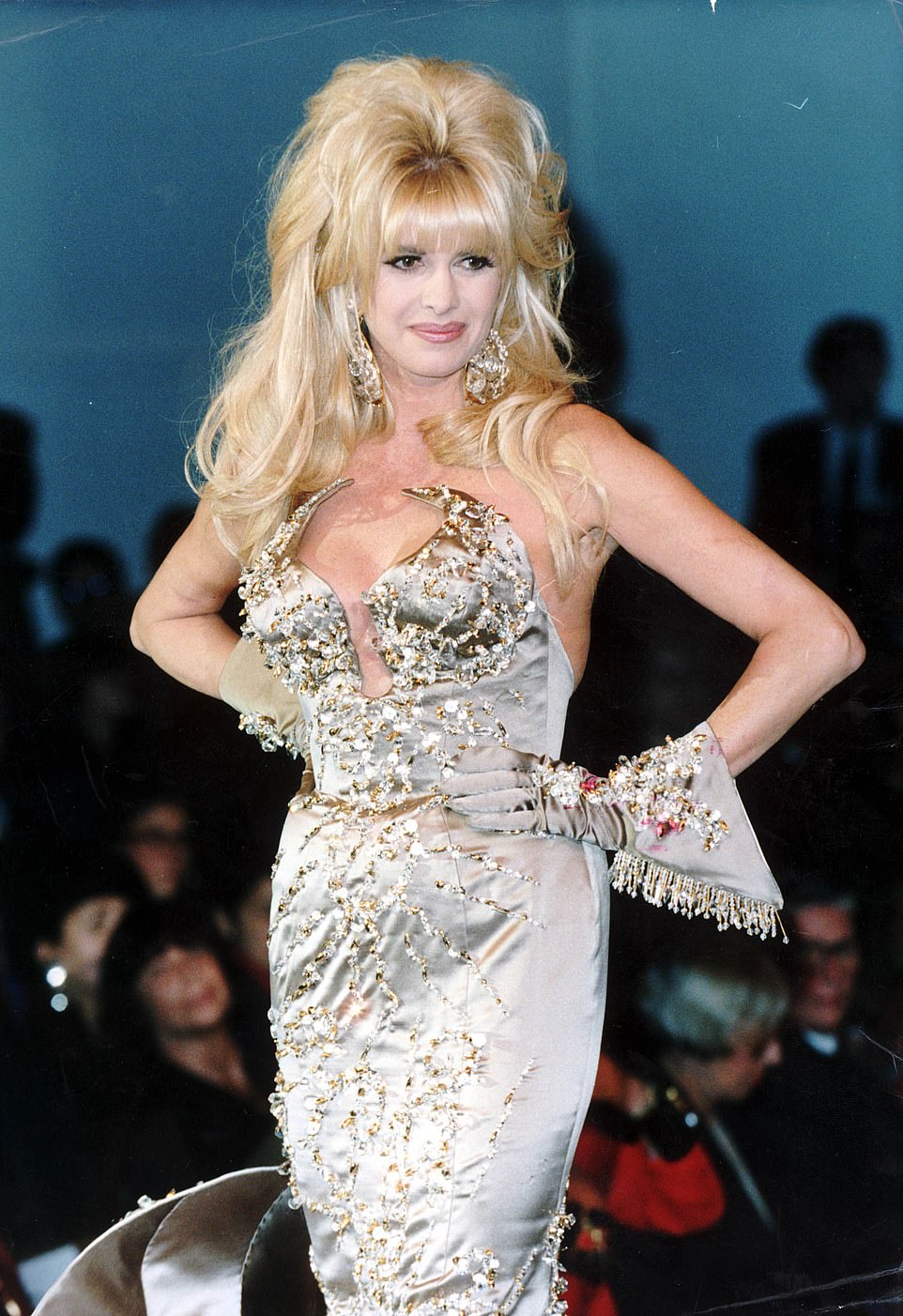 Ivana, pictured in an undated photo, also developed a successful career as a fashion designer, and sold glitzy clothes and jewels on QVC and the Home Shopping Network

The pinnacle of her career as a fashion plate came in 1995, when she opened the House of Ivana fashion and fragrance company on New York’s Park Avenue.

In 1998, Ivana dabbled in the world of media, acquiring a stake in Croatia’s Slobodna Dalmacija newspaper, which was later sold as the publication’s fortunes declined.

She dabbled in property development, but enjoyed her most consistent success by marketing her own image.

Ivana published multiple autobiographical tomes, including For Love Alone and Free To Love.

She also penned a 1995 self-help book called The Best Is Yet To come, and even turned her attention to an agony aunt column.

During her later years, Ivana largely dropped out of the spotlight. In 2017 she published Raising Trump, the definitive account of her marriage to the then-newly elected president.