There’s nothing wrong with letting your imagination take over — particularly when you’re on an island as evocative as Hvar.

As I board the bespoke Maslina motor launch taking me from Split to this fabulous little island — around the same size as Malta — I feel the spirit of Jackie Kennedy. She visited here with her sister in 1964, nearly a year after the assassination of her husband had shaken the world. She used her visit to ‘reset’ her troubled life.

Hvar, the sunniest Mediterranean island, has long been known for its transformative powers, and has attracted all kinds of outsiders. Although it has been inhabited by humans for more than 6,000 years, it was settled properly by the Ancient Greeks with their colony of Pharos, on the site of one of the oldest villages in Europe, Stari Grad. 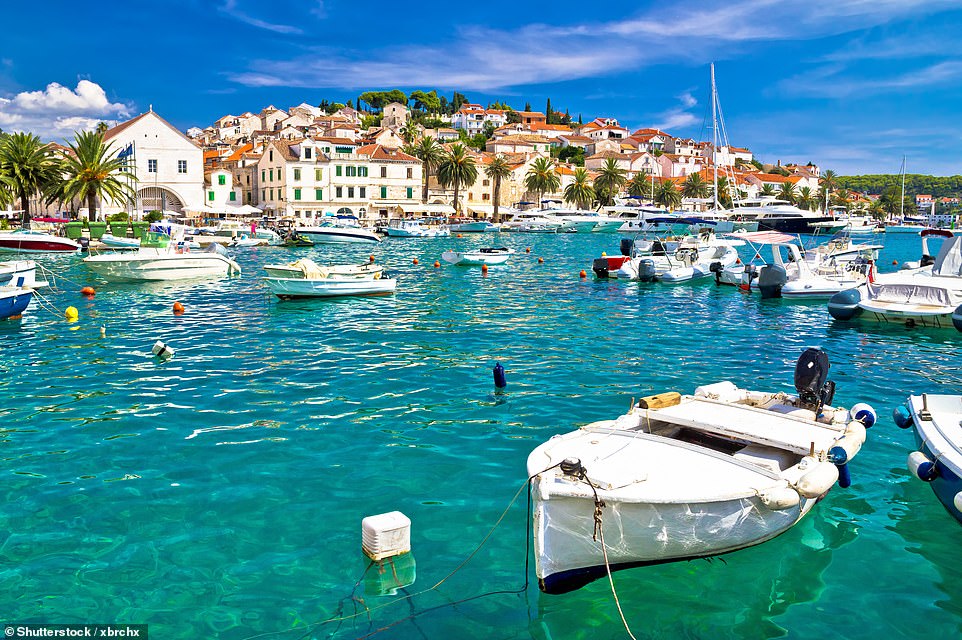 Then came the Romans, Venetians, Ottoman Turks, the Italians and, in more modern times, communism.

Finally, after the break-up of Yugoslavia and its vicious civil war, Hvar became part of the new country of Croatia.

None of that tumult is in the air today as we speed across the water for our hour-long boat trip to the new five-star, eco-friendly Maslina Resort, which blends seamlessly into the pine-tree-clad hillside. The hotel has 50 rooms, three villas, a spa and a private beach, and bills itself as a place of ‘mindful luxury’.

Jo takes an hour-long boat trip from Split to the new five-star, eco-friendly Maslina Resort (above) on Hvar 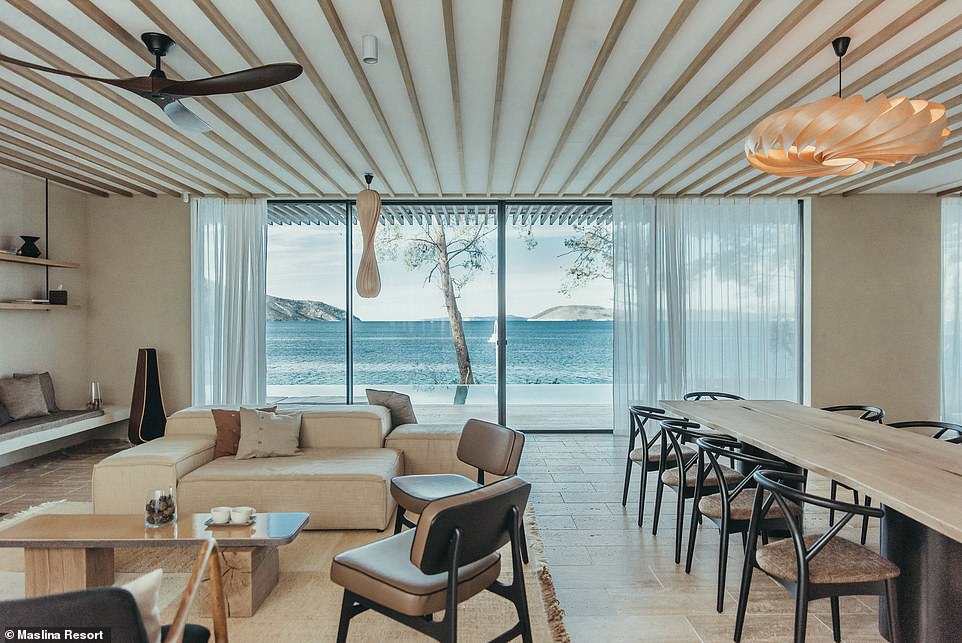 Jo notes that Maslina Resort, pictured above, bills itself as a place of ‘mindful luxury’

Above is one of 50 rooms at Maslina Resort, which also boasts three villas, a spa and a private beach 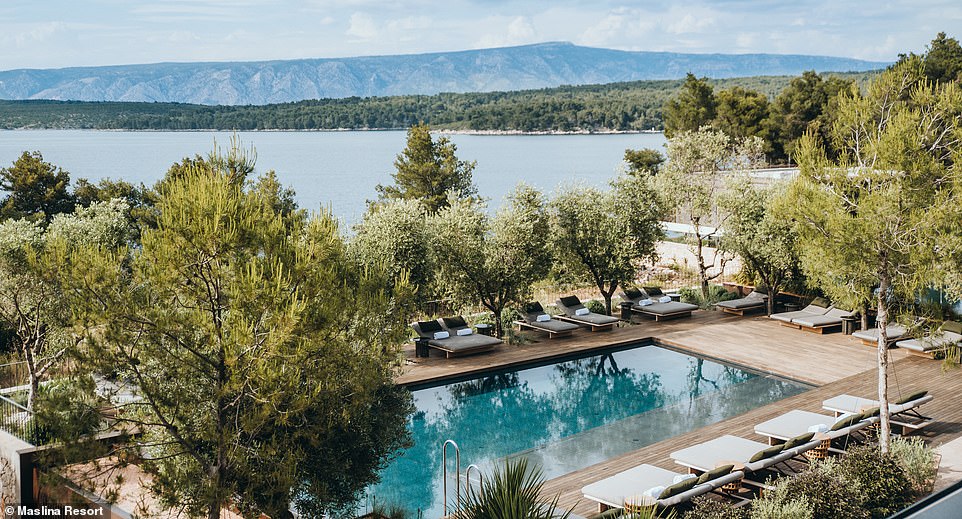 The Maslina Resort blends seamlessly into the pine-tree-clad hillside, according to Jo

Hvar Town, with its hilltop castle and clutch of clubs and bars around the old stone port, has had something of a reputation as ‘party central’.

But away from the harbour there’s an air of sleepy relaxation and an overwhelming scent of lavender. (Hvar once produced some of the greatest quantities of lavender in the world, and it is still nicknamed the Lavender Island.)

Hvar doesn’t have many long, white, sandy beaches — in fact most of them are made up of large stone coves. The compensation for this is the clearest blue water and fragrant, leafy surroundings. In the north, beyond Stari Grad, Vrboska and Jelsa, you’ll find private coves overlooking the even quieter island of Brac. There are also the lovely Pakleni Islands a short boat ride away. 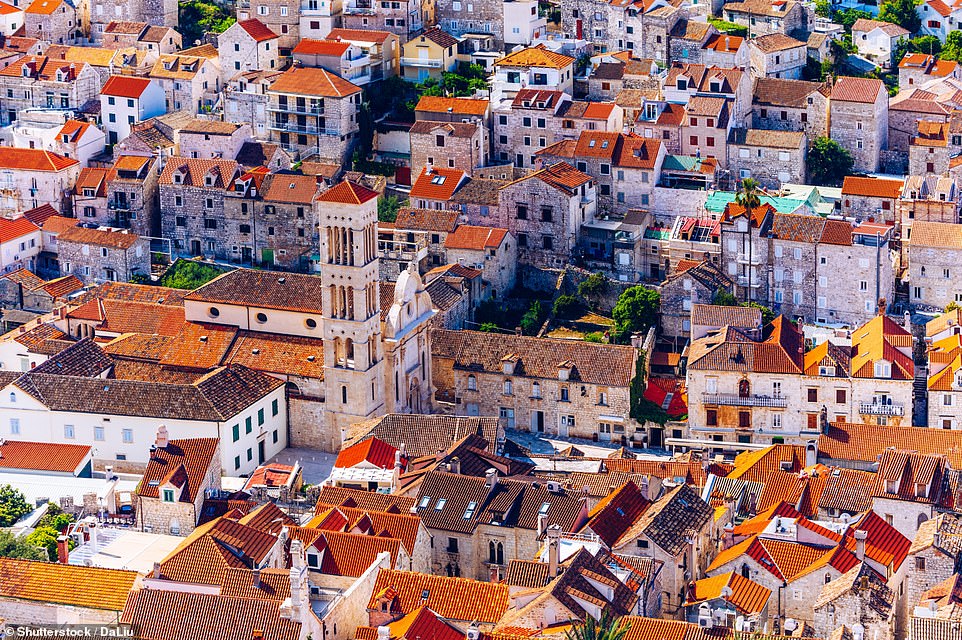 ‘Hvar Town, with its hilltop castle and clutch of clubs and bars around the old stone port, has had something of a reputation as “party central”,’ writes Jo

In the north, beyond the town of Jelsa (pictured), you’ll find private coves overlooking the quiet island of Brac 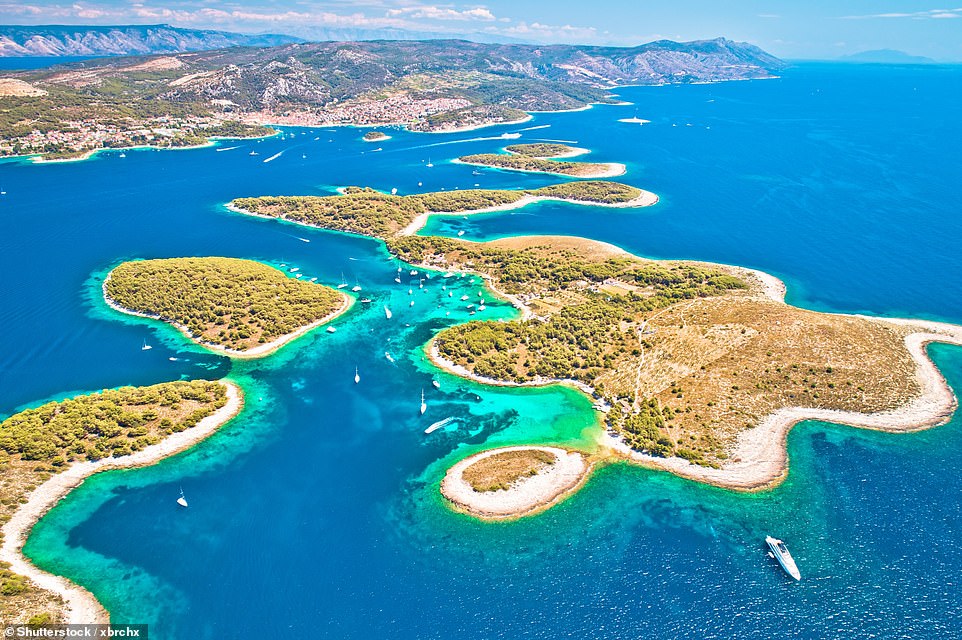 The lovely Pakleni Islands, pictured above, are just a short boat ride away from Hvar 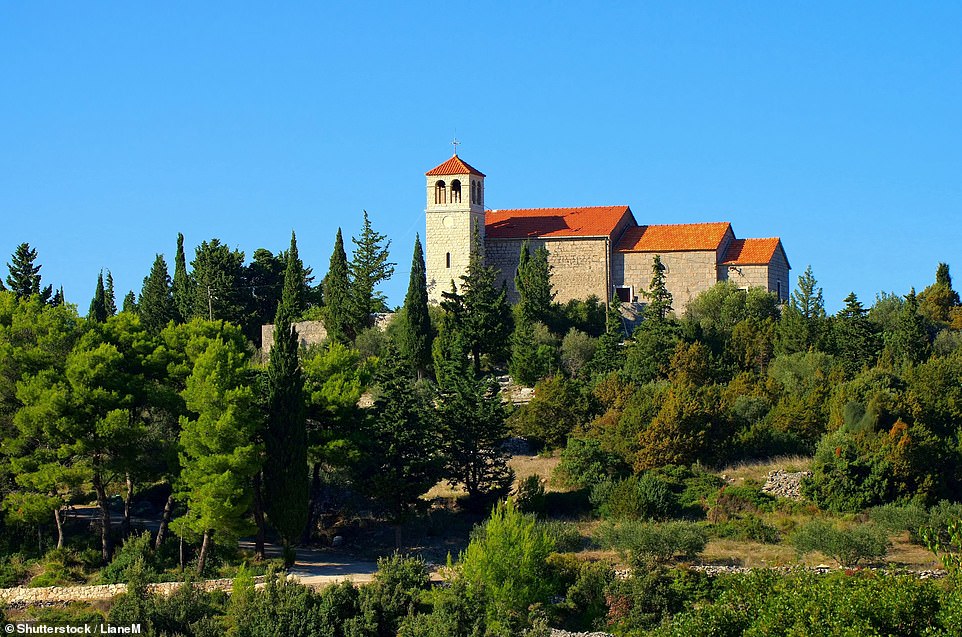 Jo meets Grgo Lucio, a former fisherman who produces the bulk of Hvar’s lavender and sells his wares in a shop near his home in Zastrazisce. Above is Zastrazisce’s church, ‘Crkva sv Nikola’ 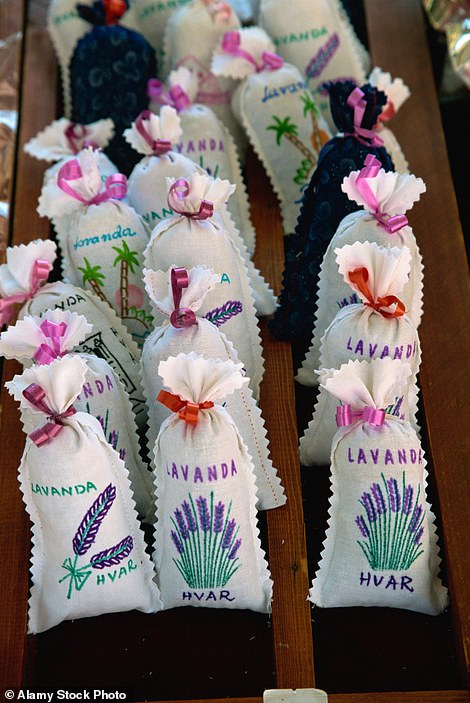 Hvar once produced some of the greatest quantities of lavender in the world, and it is still nicknamed the Lavender Island

One morning, I meet 58-year-old Grgo Lucio, a former fisherman who produces the bulk of Hvar’s lavender. He sells his wares in a shop near his home in Zastrazisce, deep in the countryside.

He fought in the civil war, and had been shipwrecked on his boat before finding an easier life on land — if ‘easy’ can be defined by working seven days a week in this lush but mountainous and challenging countryside.

Most locals have eschewed fishing and agriculture to work in tourism. There are emerging local wines, and quirky family run restaurants such as the Konoba Maslina (no connection to the resort) which sits atop one of the tallest hills.

The people are gracious, but their manner hints at their past. In St Stephen’s Square in Hvar Town, a ticket office attendant at the Hvar Public Theatre — one of the oldest theatres in Europe, built in 1612 — barks: ‘Cash only. You cannot visit with card: cash only.’

It was an irony I encountered time and time again. The people are warm and welcoming (the box office youth had the face of an angel) but underneath they have spines of steel. I thought of how Napoleon famously said: ‘If I had only 100,000 Croatians (soldiers) I would conquer the entire world.’

Hvar certainly conquered me. I particularly lost my heart to Stari Grad, a UNESCO world heritage site. Archaeologists were working on the day of my visit. ‘We didn’t have to dig very deep before the bones started popping up,’ says archaeologist Sara Popovic, working near the Church of St John.

Jo picks up a ticket to the Hvar Public Theatre, which is one of the oldest theatres in Europe, built in 1612 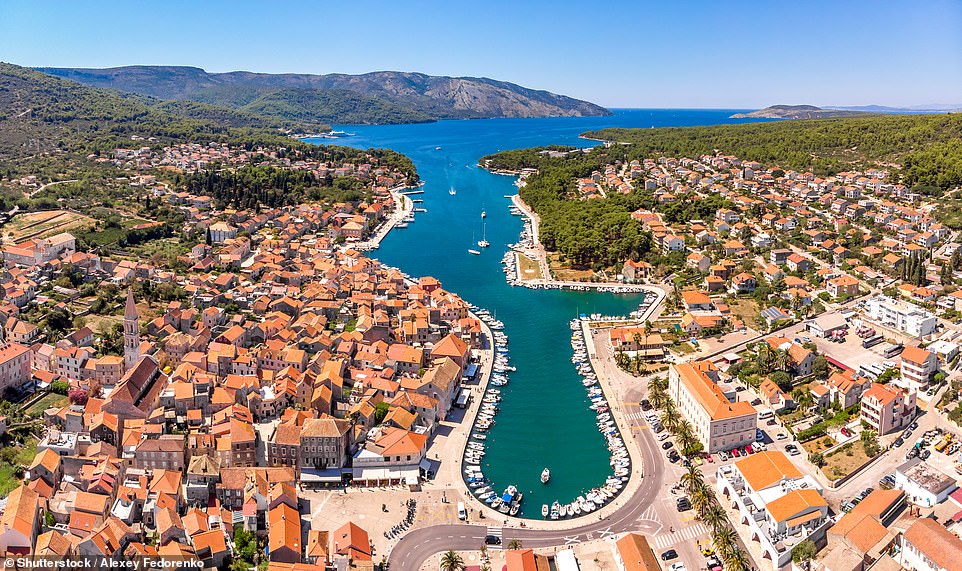 Jo loses her heart to Stari Grad (pictured). On the day of her visit to the UNESCO world heritage site, archaeologists were working near the town’s Church of St John

Rooms at Maslina Resort from £305 per night B&B. Private speedboat transfers from Split cost from £728 for up to 12 people (maslinaresort.com). London Luton to Split with Wizz Air from £46 return (wizzair.com).

‘The former civilisations are all here, in 14 layers, under the stones. We have found buttons from the clothes of buried children which date to the 13th century.’

A tiny museum houses the island’s oldest artefacts — including small glass bottles in which, according to folklore, the wives of fishermen at sea kept their tears.

There is a poignant statue of St Rocco, the patron saint of contagious diseases, who claimed to have recovered from the plague because a street dog brought him food when he was abandoned and left to starve by fearful locals.

There is no chance of tourists starving here now. Stari Grad is full of eateries serving seafood. The alleyways bustle with life.

In the main piazza, the old washing area is now a wishing well full of coins. The theory is that by throwing a coin in you are guaranteed to return to the island. I didn’t hesitate to throw in mine.