Joe Biden’s brother James has been linked to first son Hunter’s shady dealings after it emerged both men were paid huge retainers by a Chinese firm.

Further details on what exactly the pair were paid for have yet to emerge, as CBS News reported that a total of 150 of their transactions had been flagged as ‘concerning.’ They underwent a review, although the outcome of those reviews has not been shared.

The documents were obtained by Sen. Chuck Grassley, the ranking Republican on the Judiciary Committee, who spent three years digging into James and Hunter’s business dealings, which he called ‘very concerning.’

He said his team obtained the records directly from the bank where the consulting firm did business.

‘We have people with the Biden name, dealing with Chinese business people that have a relationship to the Communist Party,’ Grassley told CBS.

‘I think James Biden was very much a part of this.’ 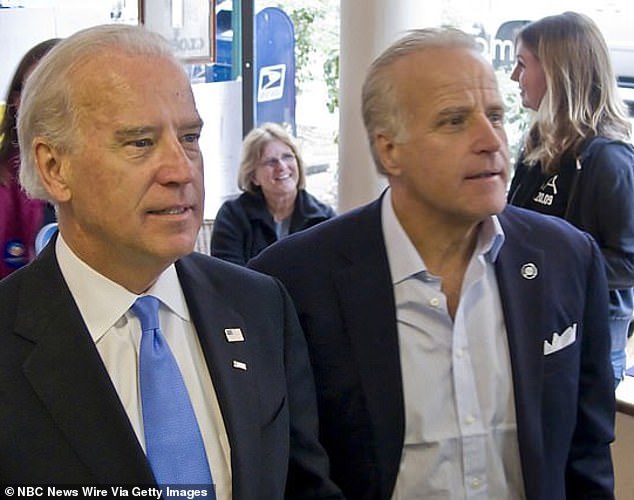 President Joe Biden’s brother, James, right, has officially been caught up in the Chinese payment scandal after newly-released documents showed he received $65,000 from a Chinese consulting firm. He and the president are pictured in 2008

‘I think Hunter and James Biden should not have entered into those relationships, full stop,’ he said.

‘To the extent those occurred while Joe Biden was the vice president, there’s a worry that they hope to get something direct from the Obama administration.’

And even after Joe Biden left office as the vice president, Weissman said, there should still have been a concern about the potential for ‘investing in these family members to get future benefits in the possibility that Joe Biden would become president later on.’

The documents came directly from the bank where the Chinese consulting firm did business, Grassley said 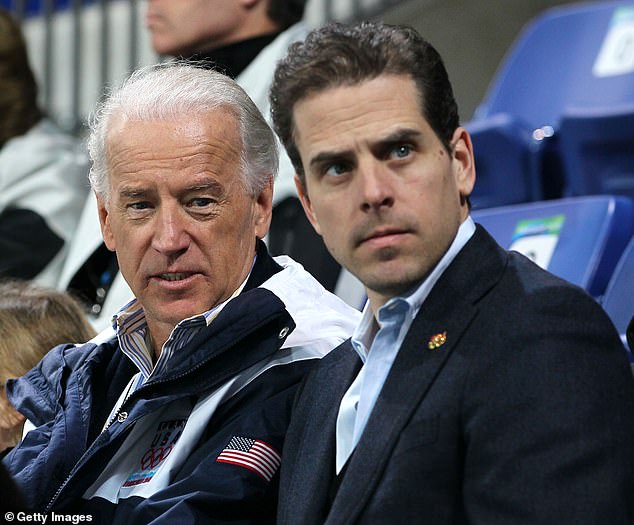 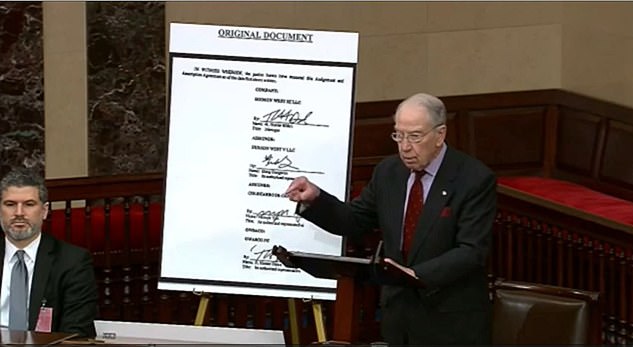 The  documents were obtained by Sen. Chuck Grassley, the ranking Republican on the Judiciary Committee, who has been looking into the Biden’s financial transactions for the past three years. He is pictured last month revealing receipts that claim Hunter had business dealings with the Chinese firm

Senate Republicans have been looking into Hunter and James’ business dealings for years, with Grassley co-writing a report with Sen. Ron Johnson in 2020, publishing bank documents obtained by his committee evidencing millions of dollars sent by the Chinese to Hunter and James.

The documents published at the time alleged that Hunter, James and James’ wife, Sara, tapped into a line of credit Hunter set up with a Chinese business executive to purchase more than $100,000 in airline tickets, hotels and restaurants.

The newly-released records from Republican investigators show what appears to be the 2017 application for that $99,000 line of credit bearing the signatures of Hunter Biden and the Chinese executive, CBS reports.

‘These records we got are the first records that have ever been made public on this issue,’ Grassley claimed. ‘Nobody else has them.’

Also on Wednesday, CBS learned that more than 150 financial transactions involving either Hunter or James’ global business affairs were flagged as concerning by US banks for further review.

Some included large wire transfers, which could point to deeper problems, or could be innocuous.

The astonishing news comes a full two years after it was first revealed that files on Hunter’s personal computer documented apparently shady business dealings between him and foreign officials.

Hunter faces a federal tax investigation over his tangled finances. He has battled drug addiction, and has sired five children by three different women, including a son born to an Arkansas stripper.

He has also faced questions over why he was paid large consulting firms by Ukrainian energy firm Burisma, despite having no specialist knowledge of the energy sector.

Some of the documents from his laptop, which were finally verified by the New York Times and the Washington Post 18 months after DailyMail.com, showed that the Chinese government-linked oil company CEFC wired the Biden family a total of $5 million, with Hunter himself receiving a whopping $1 million in 2017 to represent his business partner.

One astonishing email indicates the president could have been involved in Hunter’s business dealings with the Chinese.

In September 2017 Hunter was planning to open a new office for his multi-million-dollar joint venture with CEFC at the House of Sweden, a Georgetown building home to the Swedish embassy.

‘I would like the office sign ton [sic] reflect the following: The Biden Foundation, Hudson West (CEFC US).’

‘We are very excited and honored to welcome your new colleagues!’ the manager replied.

And other files allegedly show that the president wrote a college recommendation letter for the son of Hunter Biden’s Chinese business partner in 2017.

The letter for the son of Jonathan Li, CEO of Chinese investment firm BHR, was sent directly to the president of Brown University through FedEx, according to a chain of emails that have recently resurfaced.

Jack Maxey, who gave DailyMail.com as well as other outlets a copy of the hard drive from Hunter’s abandoned laptop in the spring of 2021, also claims he and his colleagues have found ‘450 gigabytes of deleted material’ including 80,000 images and videos and more than 120,000 archived emails.

He said he intends to post them all online in a searchable database in the coming weeks. 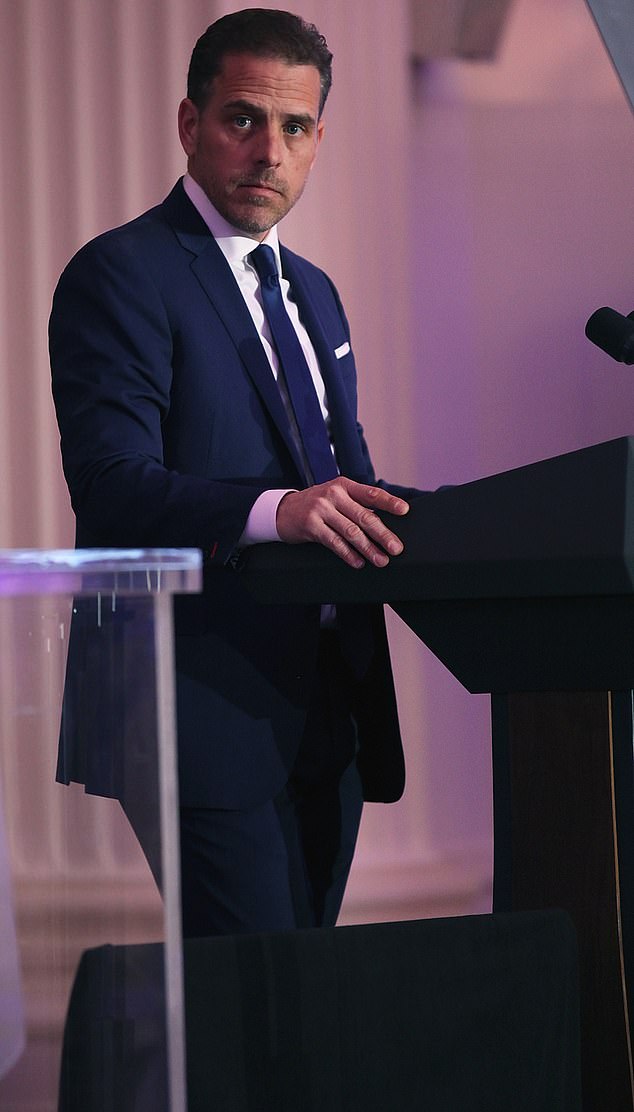 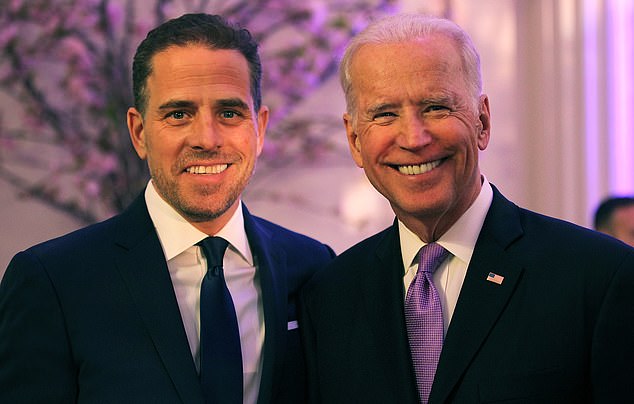 James’ name, meanwhile, first surfaced in the ongoing investigation last year in connection to a separate international business venture, which he abandoned after a White House ethics review flagged it for potential conflicts of interests.

Family members of the president are required by law to notify the White House counsel’s office of business engagements, which are then reviewed for conflicts of interest – or even the appearance of a possible conflict of interest.

The office then advises the family members on its findings, and they make decisions about how best to proceed.

It is unclear which of the business ventures James, 72, had to abandon, but he has reportedly held insurance and consulting jobs.