Environmental activists from Just Stop Oil blocked two roads leading to Vauxhall Bridge today as they caused mayhem in London for the seventh day in a row.

Some 25 demonstrators in several groups blocked routes to the north and south of the bridge, sitting down with banners and glueing themselves to the roads.

It follows protests in the capital every day since Saturday which have seen Just Stop Oil block roads around Parliament Square, Waterloo Bridge and Trafalgar Square.

Today’s sit-down during the week of action in Westminster began at about 10.30am as they continue to demand the Government stops new oil and gas projects.

The group confirmed today’s action ‘brings to an end the first week of continuous disruption’ – but that ‘coming weeks will see the disruption in the capital increase’. 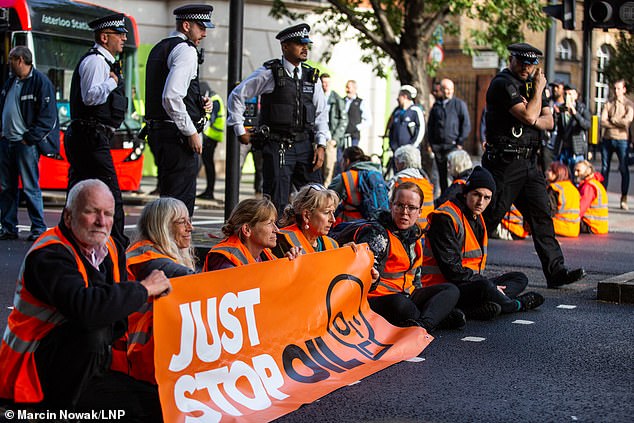 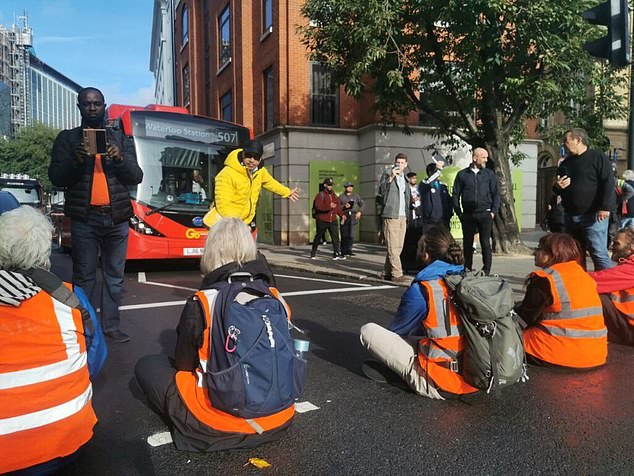 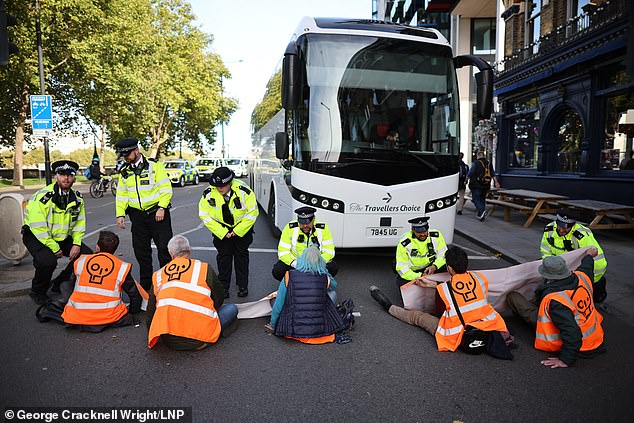 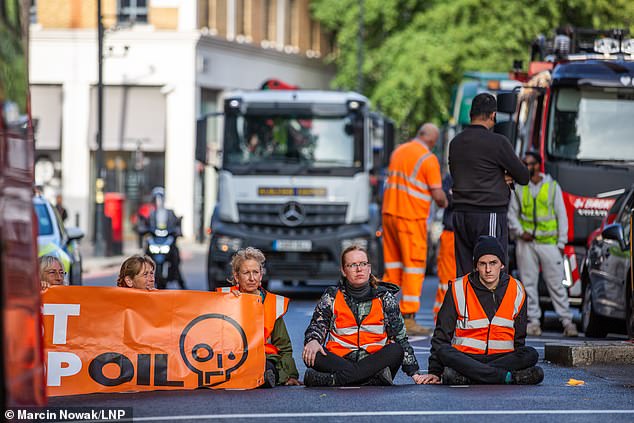 She said: ‘We are not only facing climate collapse – as more parts of the world become uninhabitable through fires, droughts and floods, and more harvests fail, then we are actually facing societal collapse.

‘Once we really confront this reality how are we expected to continue with life as normal? We all know the science and the facts, so our leaders who are doing nothing to transition away from fossil fuels are either fools or psychopaths.

‘Either way I’m not prepared to let them lead us over a cliff without putting up a fight. We are nonviolent but we must use every means in our power – protests, strikes, occupations – to try to stop the fossil fuel companies and their political defenders from destroying everything we love.’

And Phil Snider, 37, a delivery driver from Southampton, said: ‘I’m taking action because I looked at the science, read the quotes from Sir David King and the UN and was horrified. I’m doing this because I believe we all should do what we can. 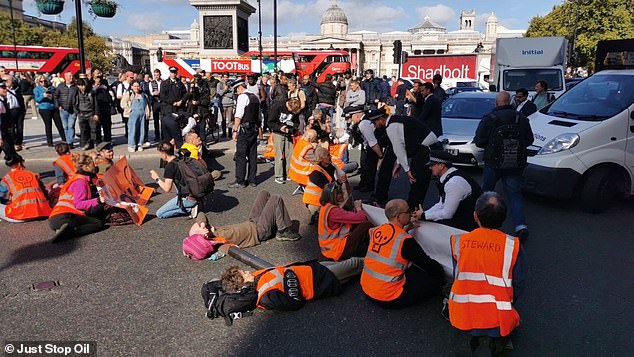 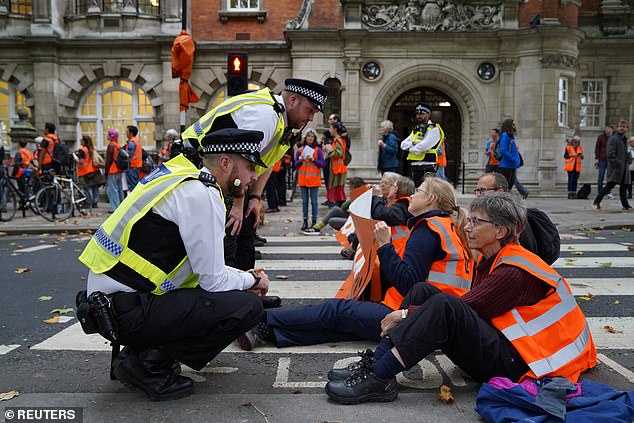 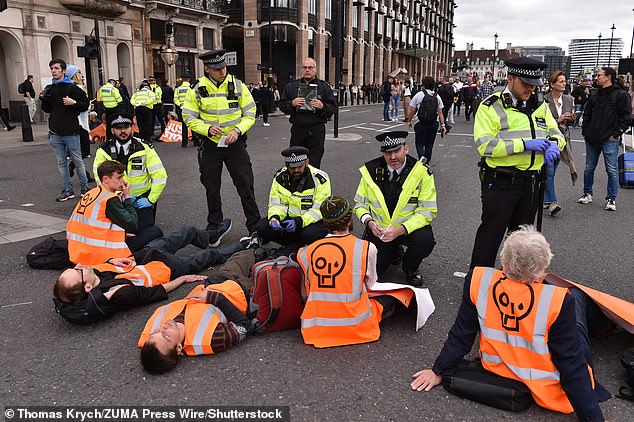 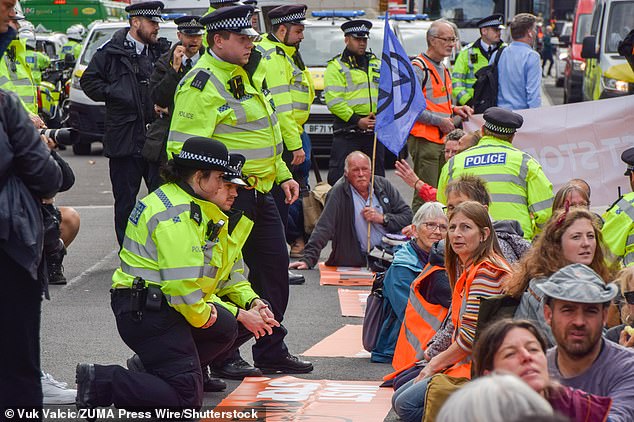 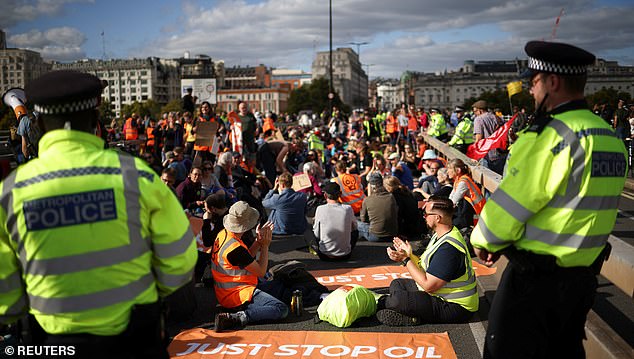 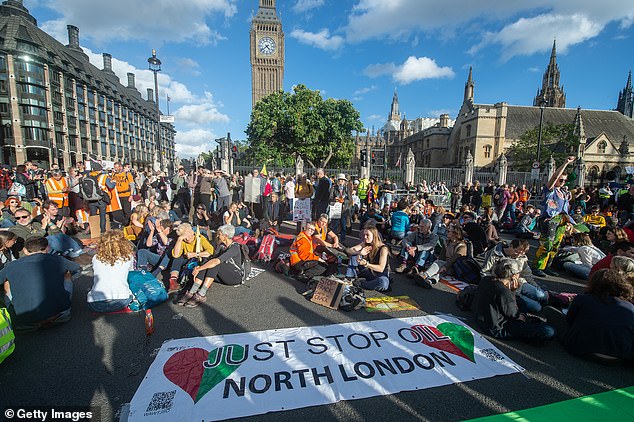 ‘I’m in a position where I am able to take action, so I am doing this. It makes me sick to see climate disasters in the paper – people suffering in countries that have not contributed to this catastrophe in the same way that rich countries have.

‘The Government needs to get a grip and stop all new oil production, tax the wealthy and corporations that have caused this disaster and go full pelt in the direction of green energy.’

A Just Stop Oil spokesman said: ‘We will continue in civil resistance because it is the right thing to do when faced with a harmful government.

‘The coming weeks will see the disruption in the capital increase until the government makes a statement to ‘end new oil and gas’.

‘Beginning the process of winding down fossil fuel production in this country is not rocket science, it’s not brain surgery. The Government is throwing water on the fire that is destroying our only home.’