Kate Hudson geared up for Halloween on Wednesday with a family outing to  pumpkin patch in Santa Monica, California.

The 42-year-old actress was accompanied by fiancé Danny Fujikawa, and her three kids: daughter Rani, three, and sons Ryder, 17, and Bingham, 10.

While there, she was seen sizing up some pumpkins in her finest autumn attire which included thigh-high leather boots and a turtleneck sweater. 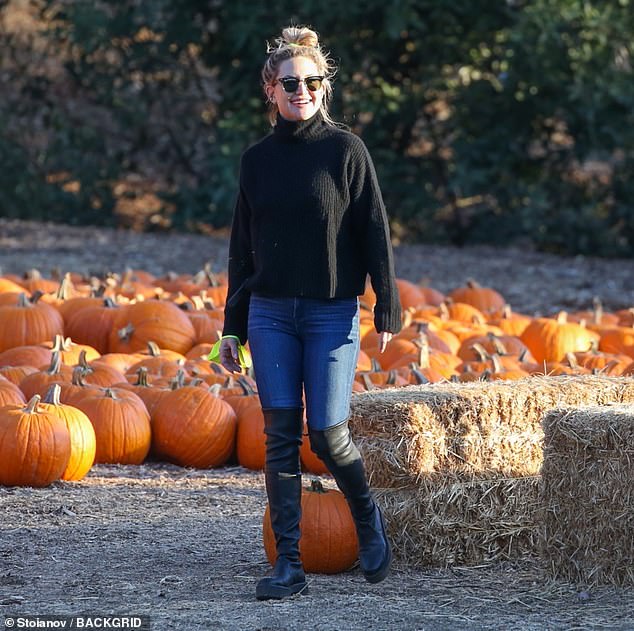 Getting in the spirit: The 42-year-old actress and her family were seen enjoying a day at a pumpkin patch in Santa Monica, California ahead of Halloween

The How To Lose A Guy In 10 Days star flashed a large grin as she gathered pumpkins alongside her family to decorate their home.

Taking advantage of a bit of fall weather in Los Angeles, she was seen wearing tight blue jeans with a cozy black cable knit sweater and thigh-high black boots with a slight platform.

Her blonde locks were tied back in a messy top knot and she slipped Ray Ban sunglasses over her face.

Though she let her kids do a bit of exploring around the pumpkin lot, at one point she was seen doting on Rani who sweetly in a pink tracksuit sat amid a sea of orange gourds. 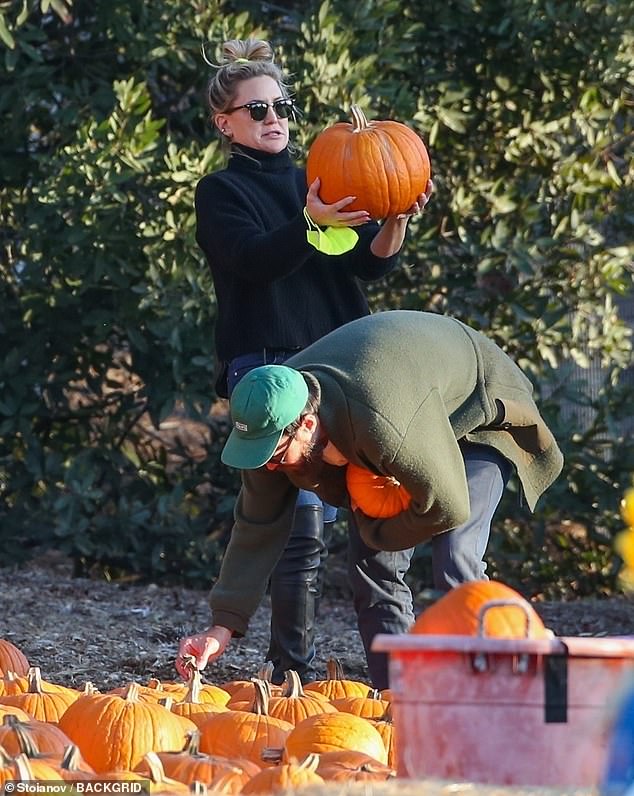 Keen eye: And during another moment she was seen hoisting up a pumpkin herself and examining it for both size and damages while fiance Danny bent down and gathered a few 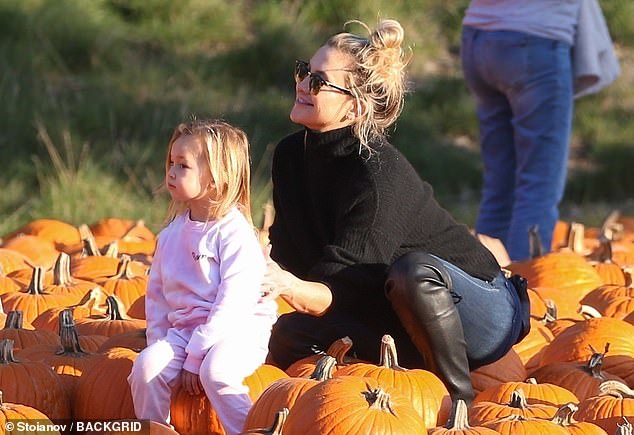 Holiday cheer: The Almost Famous star was seen doting on three-year-old Rani while they watched the family pick out a few pumpkins

And during another moment she was seen hoisting up a pumpkin herself and examining it for both size and damages, while her fiance gathered a few in his arms.

In a 2015 TODAY interview, Hudson had gushed about her love for Halloween and how her family usually throws a big annual party to celebrate.

‘I love Halloween…I go all out. We theme it out, and me and my girlfriends all dress up the same,’ she told now-disgraced host Matt Lauer at the time. 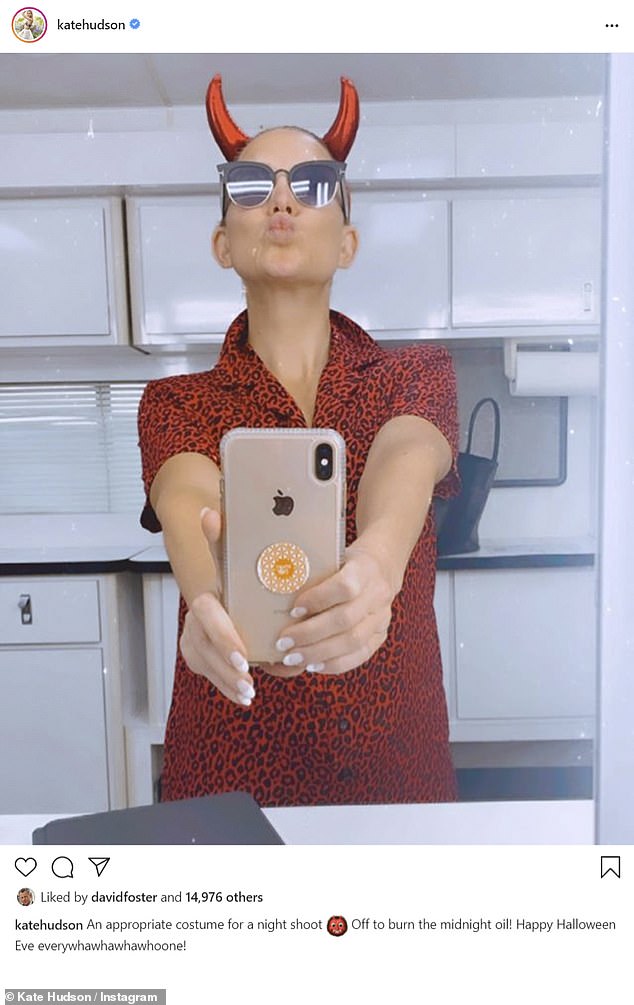 Last year: For the first pandemic Halloween, Hudson had revealed she was working but threw on a pair of devil horns as an ‘appropriate costume for a night shoot’; pictured October 2020

Amid the ongoing COVID-19 pandemic, it is currently unknown how she and her family will celebrate, as many celebrities — including ‘queen of Halloween’ Heidi Klum — have either cancelled or made plans to downsize their get togethers.

Just one month ago the Almost Famous star announced her engagement to Fujikawa, 35, after five years together — though they had known each other for nearly two decades before they started dating.

‘Let’s go!’ she wrote as she posted a loved up snap of the pair kissing as she flashed her diamond ring. That same day (September 13) she debuted the sparkler at the Met Gala.

The couple share daughter Rani who was born in 2018, and she shares eldest son Ryder with ex-husband of seven years, Chris Robinson, and Bingham with ex-fiancé Matt Bellamy. 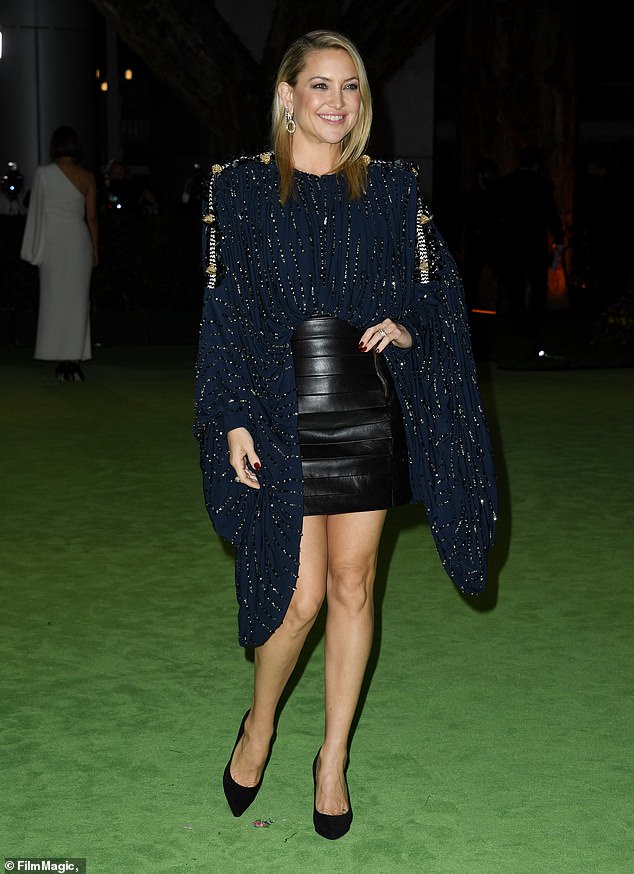 Off the market: Kate had announced she was engaged to her partner of five years on the day of the Met Gala; ; pictured September 25