Katie Boulter has lost the opening set of her third round clash against France’s Harmony Tan as her battle to reach the second week of Wimbledon grows all the more difficult.

The 25-year-old British hopeful lost the first set 6-1 within 27 minutes of stepping onto Court No.2, and now faces a tough task against the Frenchwoman, 24, who is on a roll after knocking out titan Serena Williams in a nail-biting first round epic.

Boulter is no stranger to snatching victory from the jaws of defeat, however, having come back from a set down to beat last year’s finalist Karolina Pliskova.

The rising star – who has posed for Vogue and often shares glamorous snaps on her Instagram – saw off the Czech in three dramatic sets on Centre Court on Thursday to make the third round of a Grand Slam for the first time.

Holding back tears in a post-match interview, she revealed her tragic loss as her family, who also appeared emotional, watched on.

Among the relatives in the stands was her grandfather, who invented the anti-theft tags found on clothes in shops. 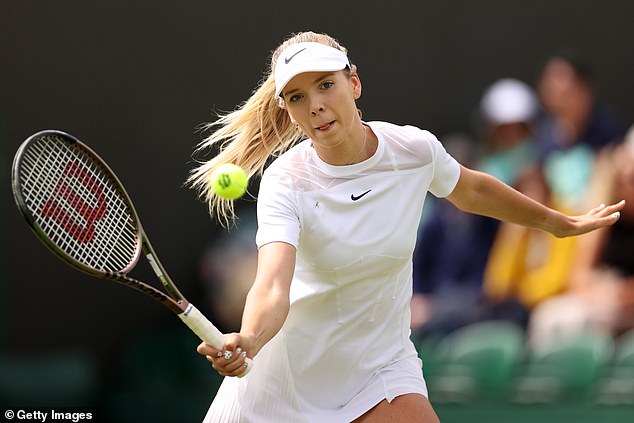 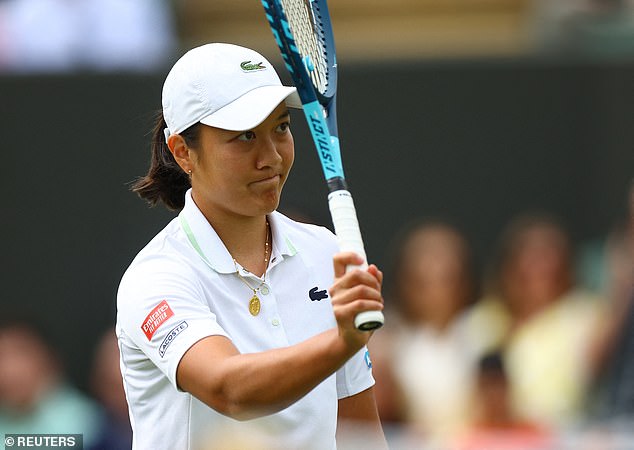 The 25-year-old British hopeful faces a tough task against Frenchwoman Harmony Tan (pictured today), who is on a roll after knocking out titan Serena Williams in a nail-biting first round battle 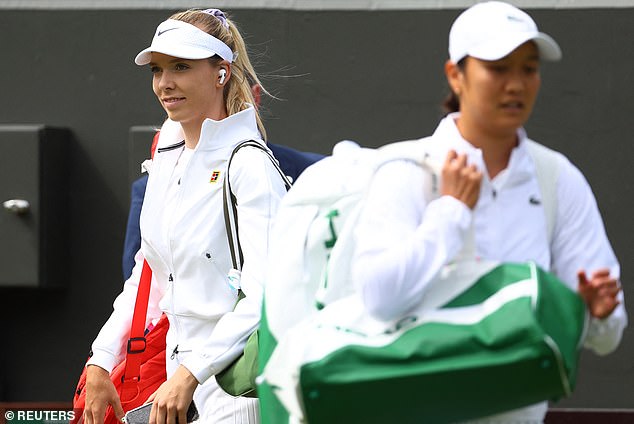 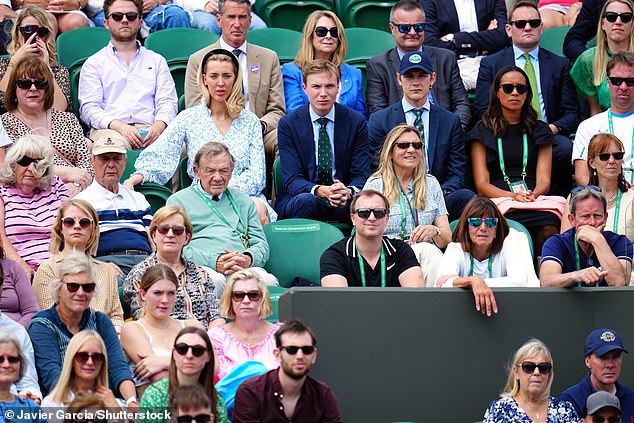 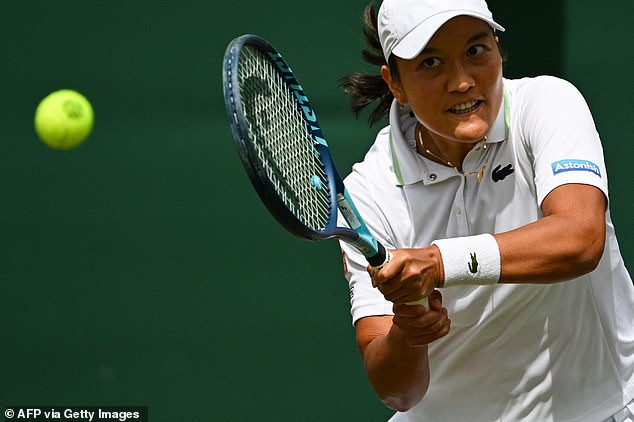 Boulter came from behind after being beaten 6-3 in the first set, despite the perfect start in which she broke serve to win the first game.

But Boulter then launched a stunning comeback – aided by several well-judged challenges to the umpire – to win the second set 7-6, and set up a grandstand finish in SW19.

The 25-year-old – whose boyfriend is top-ranked Australian tennis star Alex de Minaur- then found another gear to clinch the decisive third set 6-4.

The home crowd roared in support of the rising star, who delivered a surprise victory over the world number six, off the back of the double disappointment of defeats for Emma Raducanu and Andy Murray a day earlier.

Speaking on court afterwards, the 5ft11 player dedicated the victory to her grandmother who died on Tuesday – the same day Boulter romped to her first victory of the tournament, when she beat Clara Burel of France in straight sets. 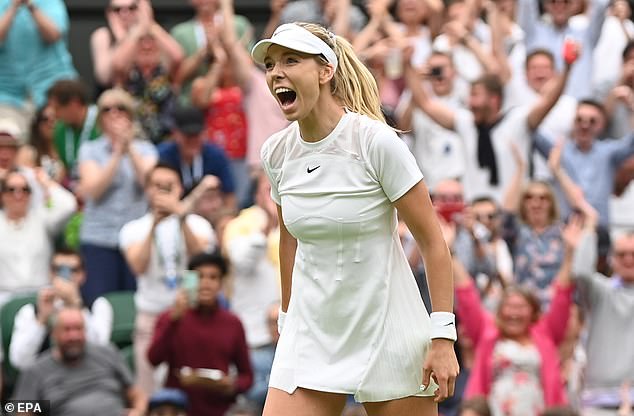 Addressing the crowd in an interview with the BBC, she said: ‘I’ve got absolutely no words right now. The crowd was unbelievable, thank you so much for getting me through that.

‘I’m going to get emotional. My gran passed away two days ago so I’d just like to dedicate that to her today.

‘Honestly, it’s a dream come true for me. I’ve hopefully got many more matches to play and if I’ve got you guys behind me for those, hopefully I can go a long way, so thank you very much.’

The British number three was in tears in her post-match interview on Centre Court as she dedicated the 3-6 7-6 (4) 6-4 win to her gran having learned of her passing just after Tuesday’s first-round win over Clara Burel.

‘I actually had a phone call from my grandpa the night before I played,’ said the 25-year-old, who is through to the third round of a grand slam for the first time. 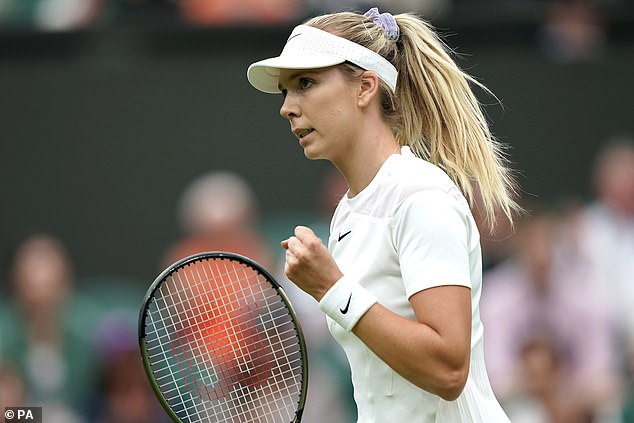 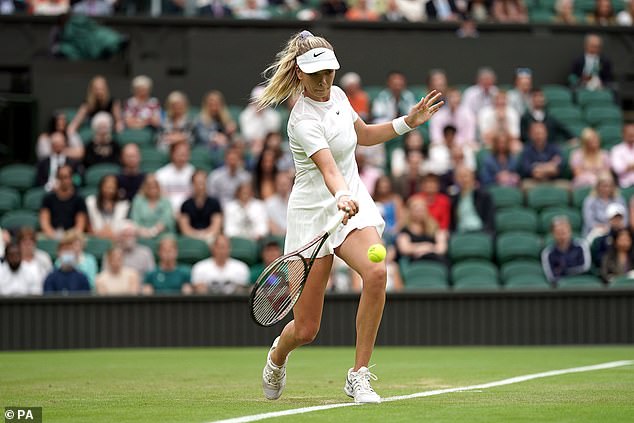 Katie Boulter in action during her second round match against Pliskova. The British number three went into the match full of confidence after a fine run of tournaments on the grass, including victory over Pliskova in Eastbourne last week

‘He didn’t mention anything, but he kind of gave me the inkling that it might be coming. I didn’t know anything until after my first match where my mum basically pulled me aside and told me after the first match.

‘It’s been a tough few days for sure. I’ve tried to kind of get my emotions out and deal with the situation, try and keep my head on the tennis. I was lucky because my grandpa managed to come down from Leicester, so we could keep him company and keep supporting him at the same time.’

Boulter’s family lived the match with her from the player box, and she said of her grandmother: ‘Her favourite tournament was Wimbledon. That’s why it’s a special one for me. She’d watch every single match that was on the TV.

‘She’s always someone who’s been right into tennis from stage one. She lives just down the road from the tennis club. That’s the tennis club that I started playing tennis at.

‘Leicestershire is very close to my heart. I’ve spent a lot of time on the courts there with my grandparents and my family. It’s a lot of memories. Ones I cherish.’

The British number three went into the match full of confidence after a fine run of tournaments on the grass, including victory over Pliskova in Eastbourne last week.

And, after defeats for Emma Raducanu and Andy Murray on Wednesday, Boulter thrilled the home crowd by coming from a set down to win 3-6 7-6 (4) 6-4.