Eco-conscious Kylie Jenner has been slammed for taking a 12-minute flight on her private jet – for a 26 mile journey that would have taken 30 minutes by car.

The billionaire beauty mogul, 24, was blasted as a ‘climate criminal’ for her short haul journey across California last week.

The star splashed out thousands of eco-friendly products for her daughter Stormi, 4, in 2020, kitting out the nursery in natural, organic and sustainable items

Stormi has a $3500 changing table and a $400 organic mattress in her crib, while Kylie’s billion dollar brand last year announcing that they were going vegan.

Kylie is the latest member of her family to be accused of hypocrisy, after she flew on her luxury ‘Kylie Air’ private plane twice across the county on July 13, and again just two days later on July 15.

The Bombardier Global 7500 jet travelled for 35 minutes from Palm Springs, just outside of LA, to Van Nuys, in Los Angeles, close to her $36million Hidden Hills mansion on July 15.

Two hours later the mum-of-two then flew from Van Nuys, to Camarillo in in Ventura County, California – a trip which took just 12 minutes according to CelebrityJets on Twitter.

Experts have revealed that her trip would have cost around $1600 to just fuel the plane, but if a private jet was hired for the trip it would set you back $7200.

Had the star driven the 26 mile trip from her home in Hidden Hills to Camarillo it would have taken her around 30minutes.

But instead the star drove 30 minutes in the wrong direction to Van Nuys airport, before jumping on the plane – with the journey taking longer despite the 12 minute flight.

She posted on her Instagram, to her 359million followers, that she would be going ‘vegan and clean’ with her products as it was ‘time to elevate.’ 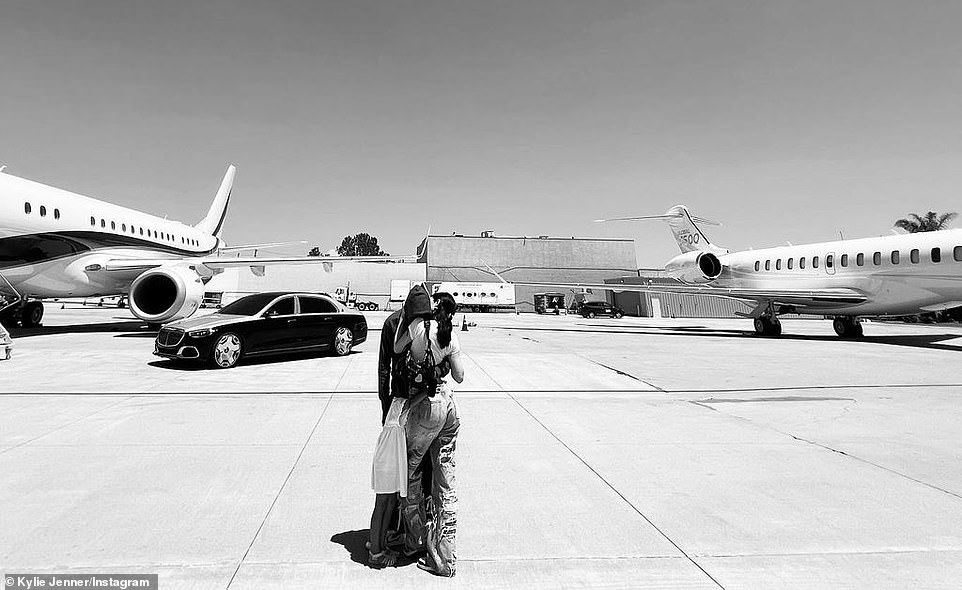 Shock: Kylie Jenner has been called a ‘climate criminal’ for reportedly taking a 12-minute flight on a private jet after coming under fire for boasting about her and Travis Scott’s planes 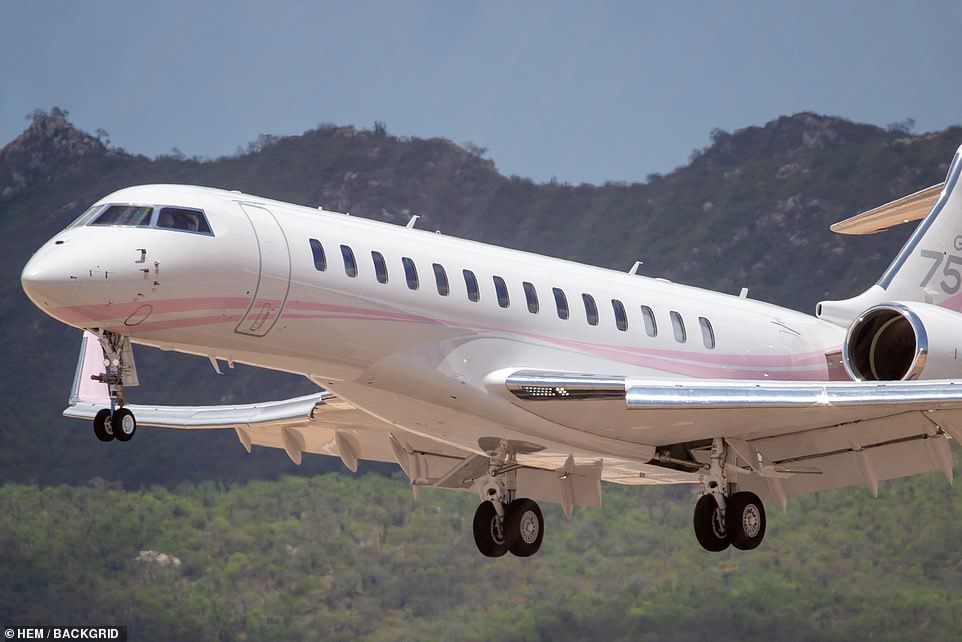 Luxury: The star bought the $70million plane in 2020 and has since been slammed for the amount she uses the jet 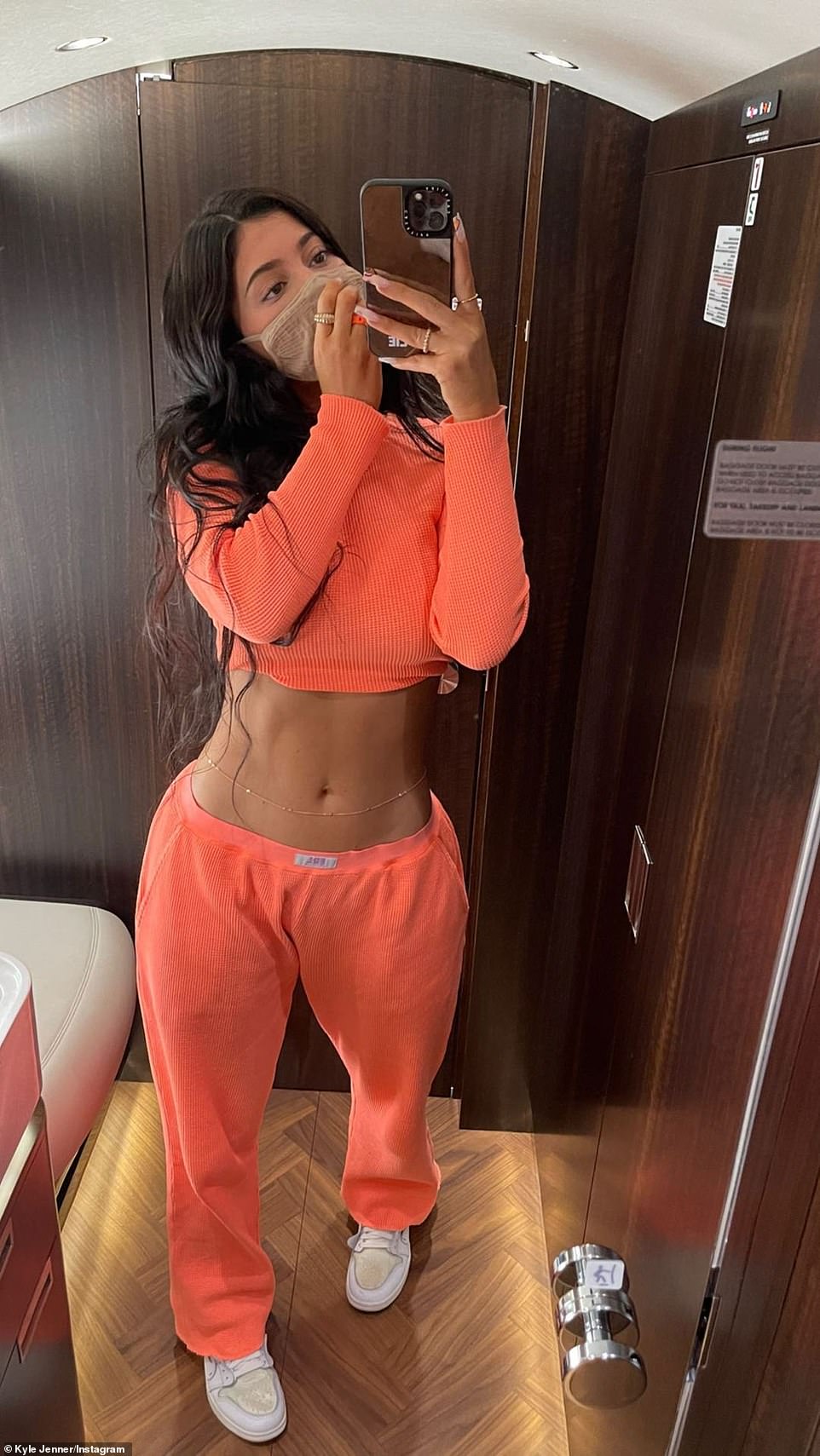 Flaunting: Jenner regularly posts pictures of her wealth from inside of her plane, despite previously forking out thousands on eco friendly products for her daughter 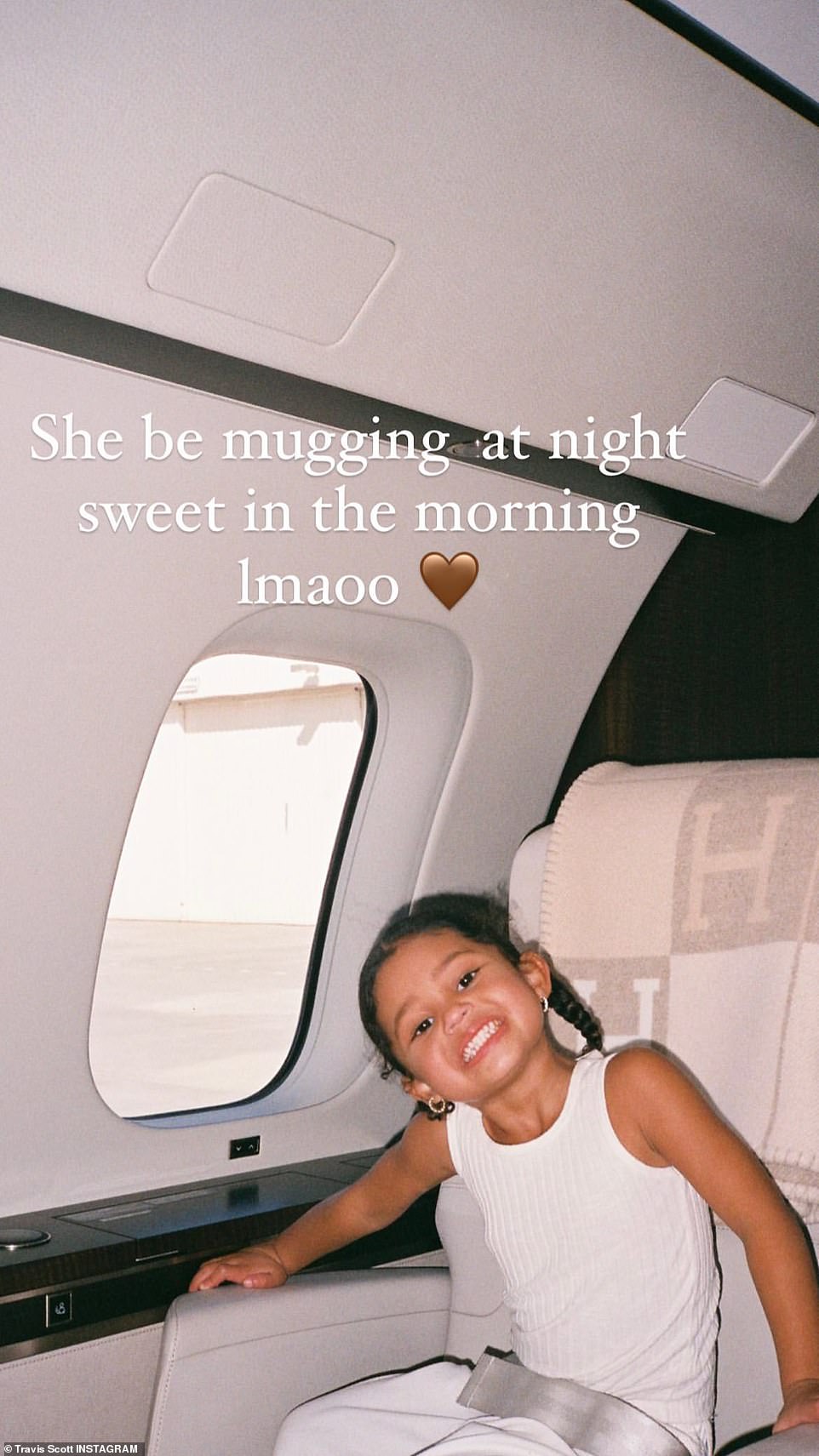 Sweet: Travis Scott posted a snap of their daughter Stormi inside of the luxury jet, which features Hermes blankets over every seat in the cream interior

CelebrityJets also revealed that her plane travelled from Camarillo, California, to Van Nuys two days before on July 13 – a trip of just 17 minutes.

Her jet then took a 29-minute flight later the same day, travelling from Van Nuys to Palm Springs, California.

Last week the star faced a huge backlash after posting a picture of her and boyfriend Travis Scott, 31, embracing in front of their fleet of jets and luxury cars.

She blasted ‘you wanna take mine or yours?’ in a tone-deaf social media post which saw her branded as ‘classless’.

Jenner purchased the plane in 2020 for a rumored $72.8 million and fashioned it with a whole lot of neon, a full bar, and Hermès blankets over every seat.

Fuming fans responded to her string string of very short-haul flights, criticizing Kylie for being a ‘climate criminal’ and not using other modes of transport.

They pointed out that the star had travelled 13 miles out of her way to get to the Van Nuys airport, before travelling in the wrong direction, adding it is the ‘worst thing’ about the situation.

One person raged: ‘Kylie seems to love taking her jet for short trips that are probably drivable. Seems to be a theme here.’

Another said: ‘Kylie Jenner: full time climate criminal. These jets should never be allowed to take off.’

Others have said the stars journeys should be ‘illegal’ while others described her multiple flights in a day as ‘gross’.

A third person commented: ‘She took a 12minute flight??? Why is this even allowed she could’ve seriously went in a car.’

In the air: With plenty of room onboard – Kylie’s luxury jet has 10 white leather seats embroidered with her initials (pictured on board earlier this year with Stormi and Khloe) 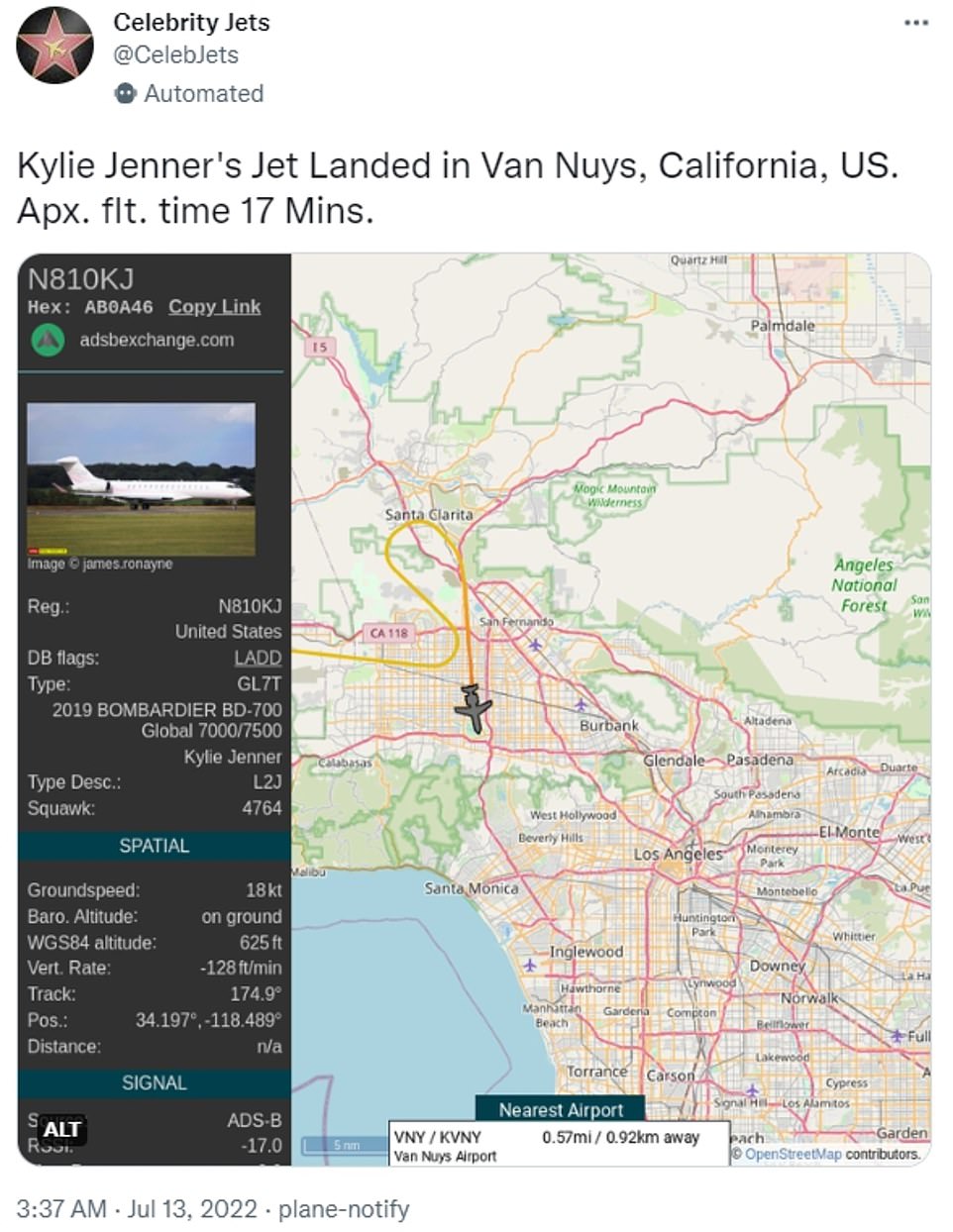 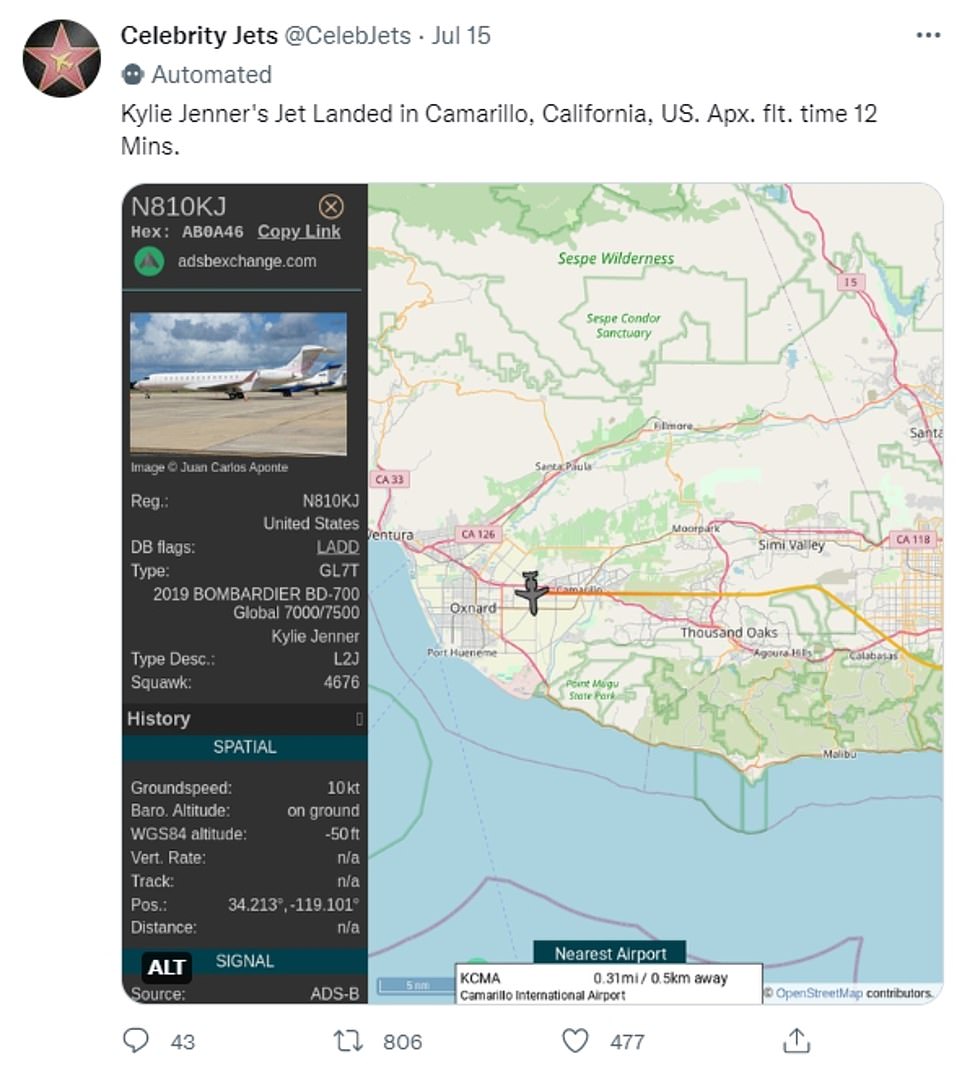 Her followers also hit out at the beauty mogul after she shared a black and white image of her and music artist boyfriend Travis Scott with their matching planes.

Many fans angrily criticized the pair and the tasteless post at a time when global warming and the rising costs of living are key issues for much of the US.

In the snapshot the twosome, who’ve been dating since 2017, embraced each other with their heads nuzzled in each other’s shoulders.

Their daughter Stormi Webster was also in on the affectionate moment as she hugged both her parents in front of the planes and a Rolls Royce.

But fans were quick to slam the stars, telling them they were ‘flaunting their wealth’ while others in the US are ‘barely surviving’ because of a rising cost of living.

One questioned: ‘Why do I have to limit my meat consumption and use paper straws while the 1% gets to pump tons of carbon into the atmosphere for a day trip to Palm Springs.’

Kylie was also asked ‘what about climate change’ and advised to ‘take neither’ of the planes in order to ‘reduce’ her carbon footprint.

Another fan added: ‘This display of wealth is unbelievable, so detached from the common persons struggles.’ 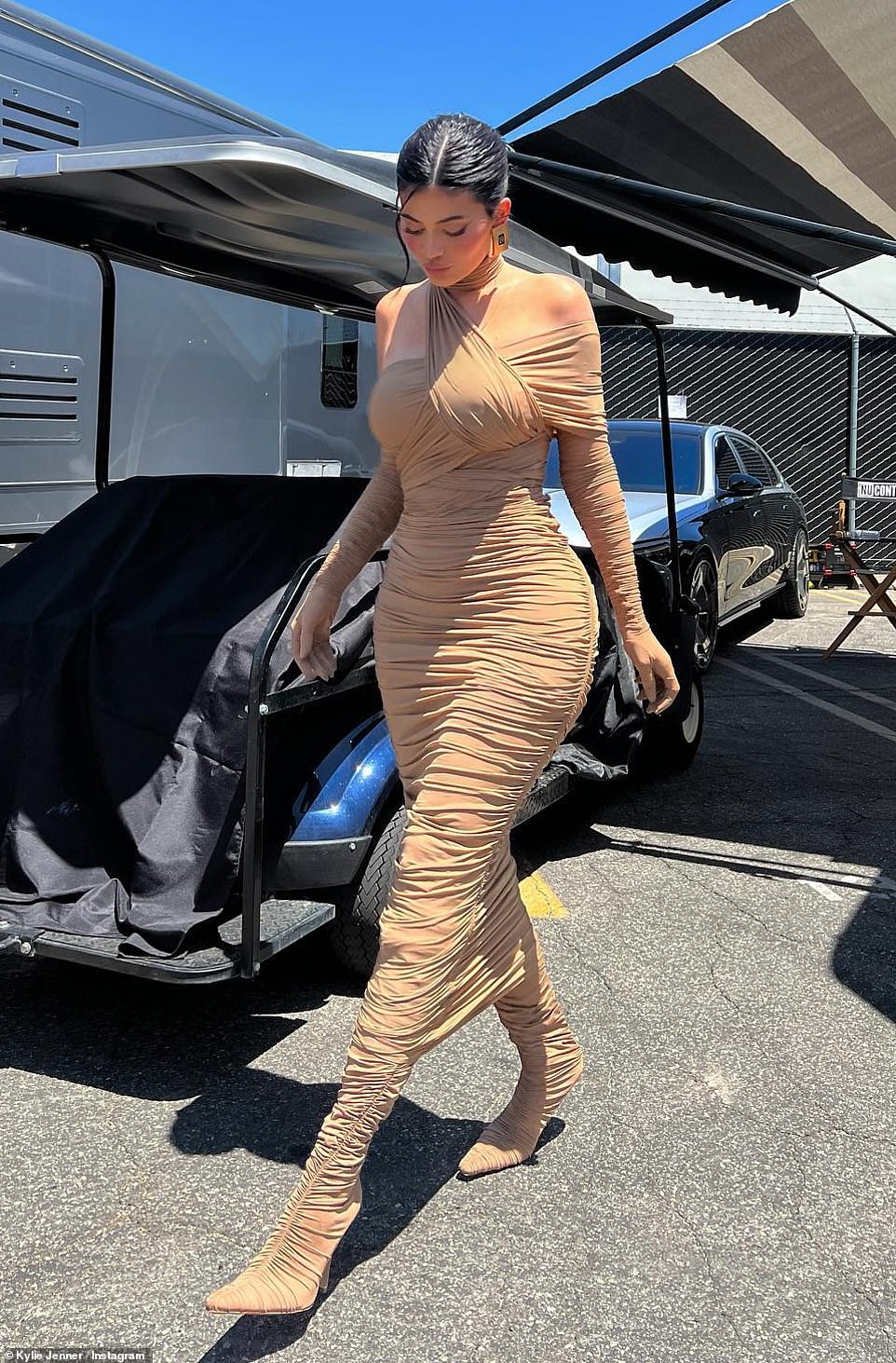 Planes: It also claimed that Kylie’s jet headed on a mere 12-minute flight from Van Nuys to Camarillo, days after a 17 minute flight 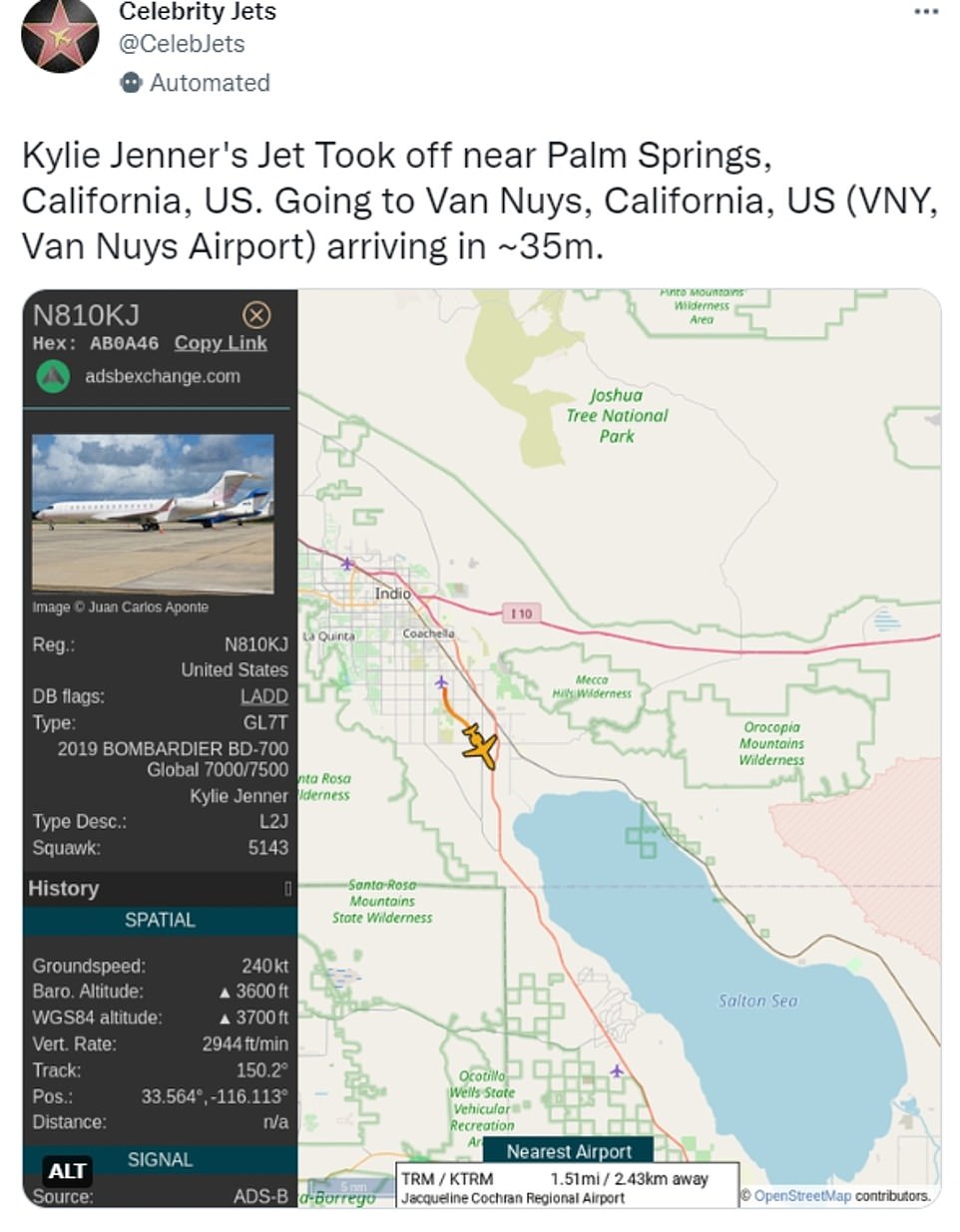 Jetting off: Celebrity Jets also shared a flight map for another set of flights last Friday, reportedly showing her jet travelling from Palm Springs to Van Nuys in a 35-minute flight

Anger: Responding to her string of very short-haul flights, enraged people took to Twitter to criticise Kylie for being a ‘climate criminal’ for not driving the short journeys instead 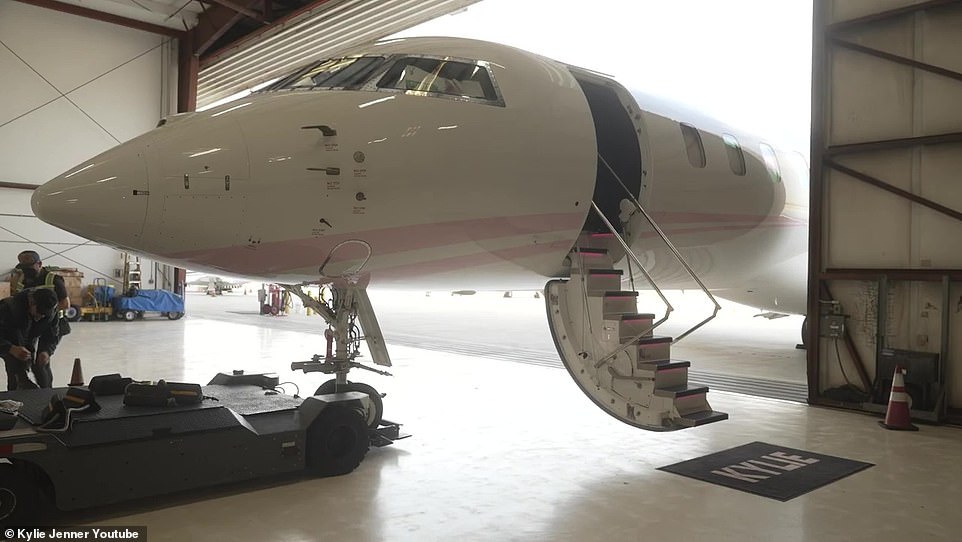 Eye-watering: Kylie’s luxury Bombardier Global 7500 aircraft was bought in 2020 for a rumored $72.8 million

With plenty of room onboard – Kylie’s luxury jet has 10 white leather seats embroidered with her initials – momager Kris Jenner and her boyfriend Corey Gamble were also seen going along for the ride.

The average flight time from Los Angeles to Palm Springs is 49 minutes, with the time spent in the air just 30 minutes.

Kylie is the latest member of her family to be criticized for their luxury air travel, particularly on short journeys.

Joaquin Phoenix called out stars to make sacrifices at the 2020 Oscars saying: ‘We don’t have to take private jets to Palm Springs.’

Earlier this week the longtime couple stepped out in West Hollywood two nights in a row.

They put on a fashionable display, with Kyle rocking a skintight black PVC mini dress for dinner at Craig’s one night.

She made it a point to share photos from the evening with her social media followers.

One capture showed the Houston-born rapper hugging the reality TV star from behind as they posed in a mirror. 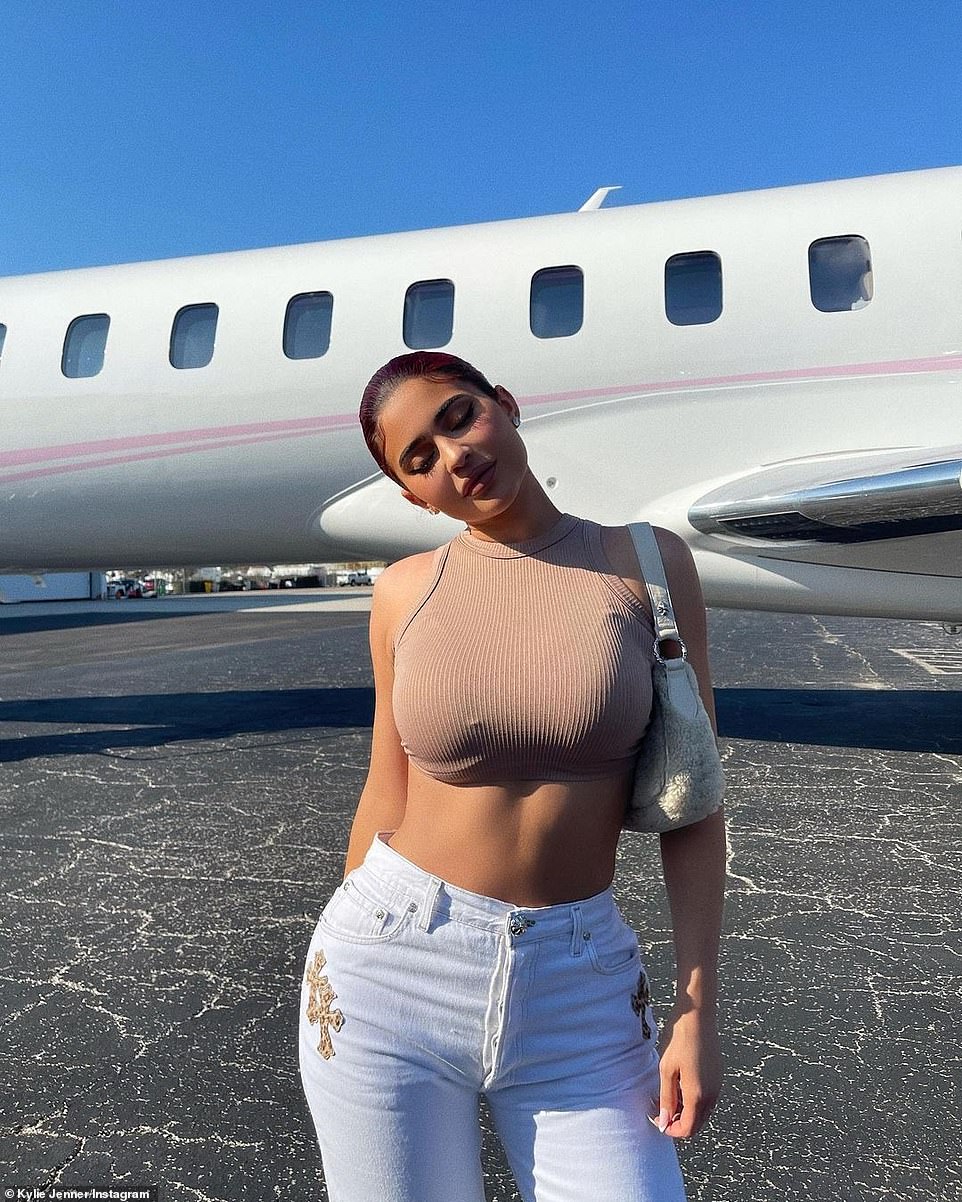 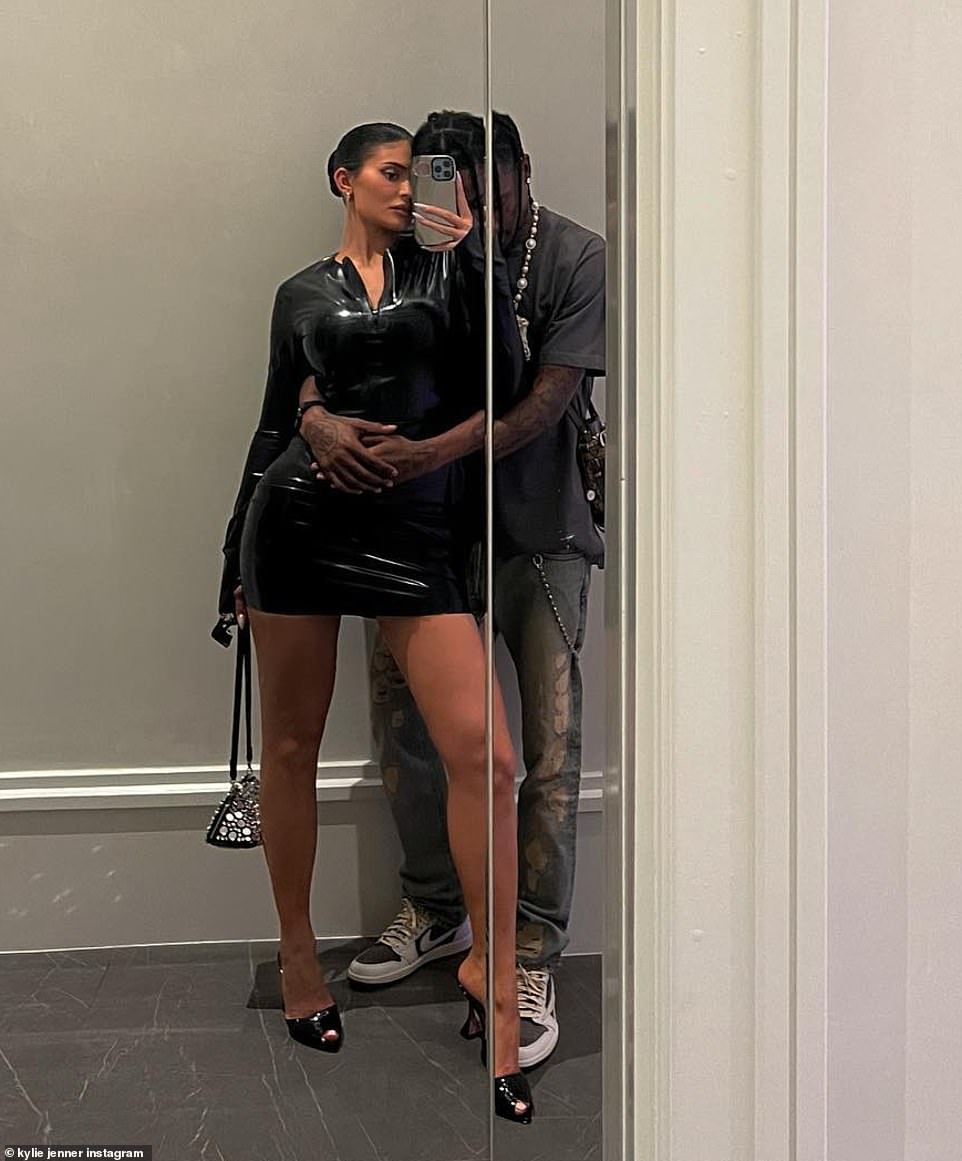 Display of affection: Kylie and Travis were loved-up in a recent selfie shared to social media 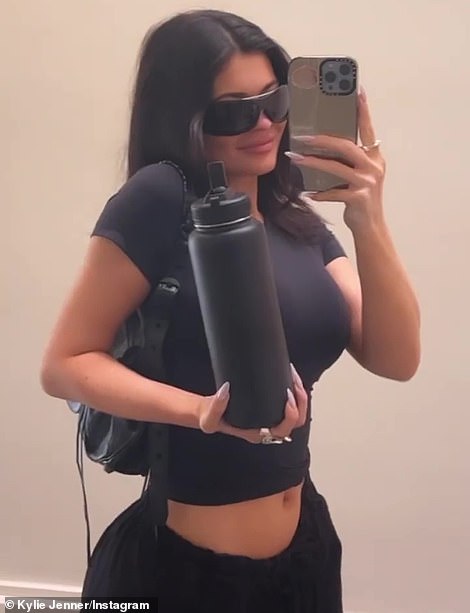 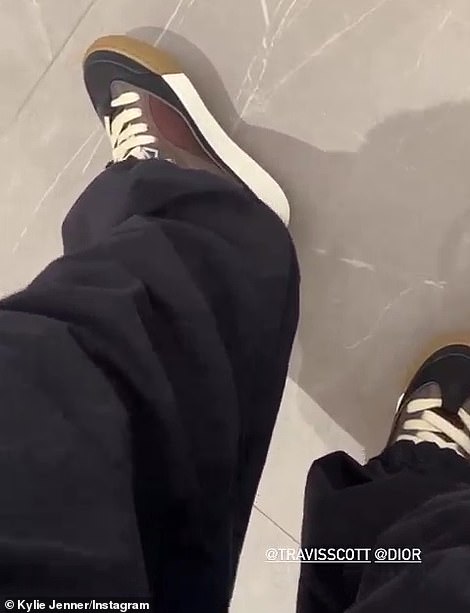 Number one fan: Kylie showed support for her man as she modeled an unreleased pair of sneakers from his most recent footwear collaboration

Later in the week Kylie showed support for her man as she modeled a pair of sneakers from his most recent footwear collaboration.

It came one day before Dior was set to release its B713 sneaker in conjunction with the rap star.

Jenner is an all-around nurturing partner, as evidenced by another recent post with Travis.

The Keeping Up with the Kardashians alum created an Instagram Story thread last week as she prepared a hearty sandwich for her boyfriend. 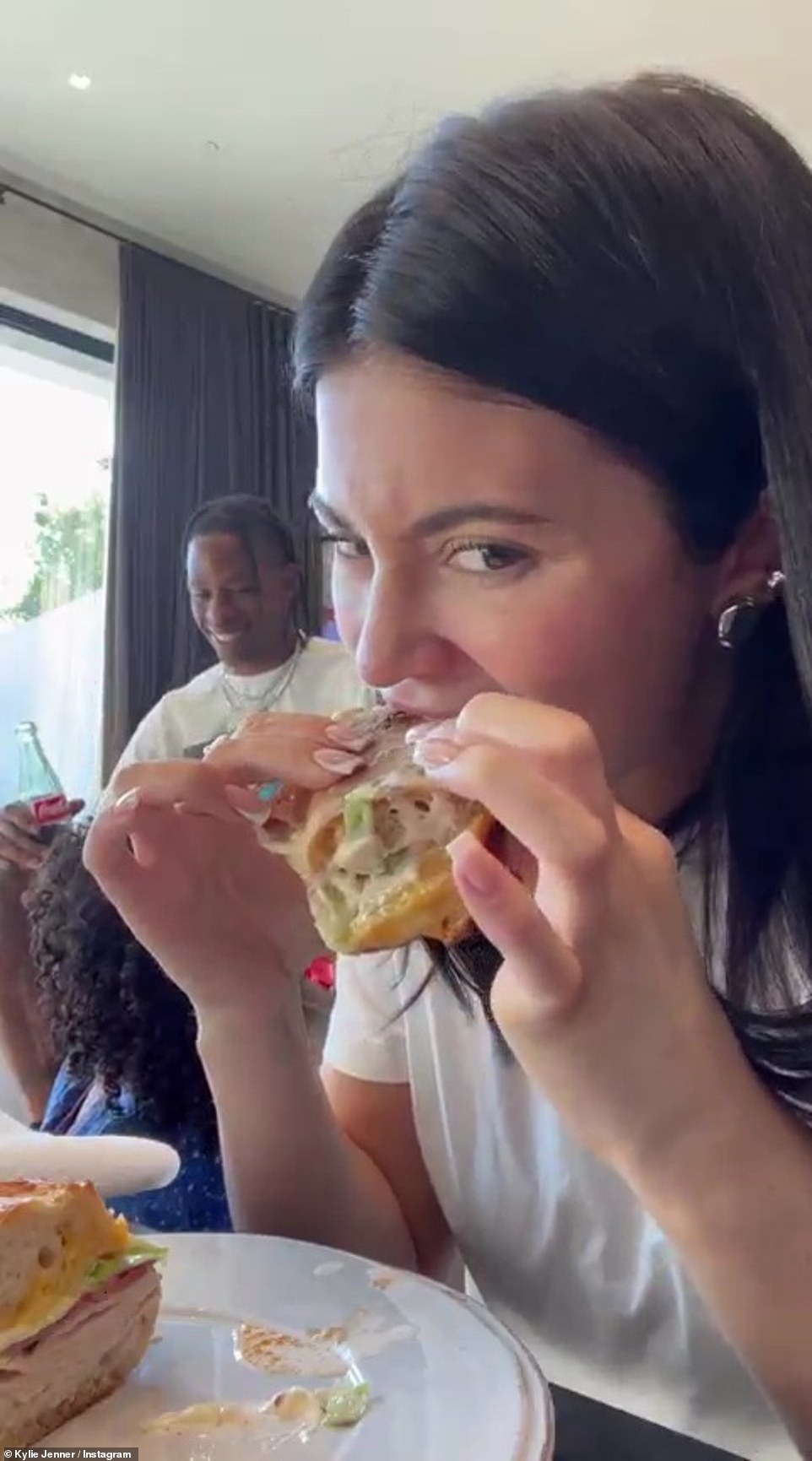 Yum! The Keeping Up with the Kardashians alum created an Instagram Story thread last week as she prepared hearty sandwiches for her and Travis