By Charlotte Dean and Madeleine Ross For Mailonline

London Hughes has revealed she has had surgery to remove her fibroids after being diagnosed with the condition during a routine trip to her gynaecologist.

The comedian, 33, who explained that fibroids are often non-cancerous growths in your uterus [womb], said she was also told she has endometriosis.

London has since had a four-hour operation to remove the fibroids and joked that her stomach now looks and feels like the ‘dude from the Operation Game’. 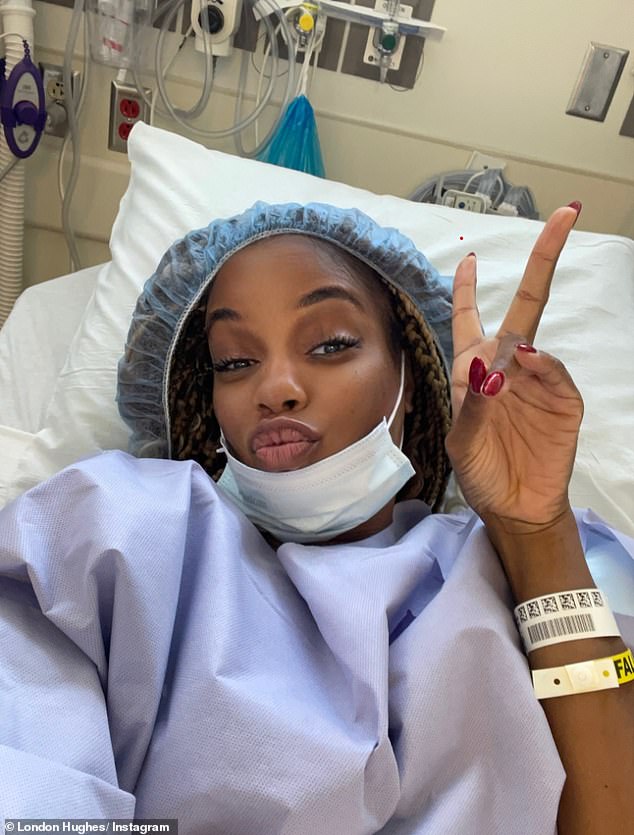 Candid: London Hughes has revealed she has had surgery to remove her fibroids after being diagnosed with the condition during a routine trip to her gynaecologist

Revealing that she had no concerns and booked the gynaecologist appointment four months ago for the ‘clout’, London explained: ‘The thought of someone solely in charge of my vagina sounded fabulous to me!

‘But during my first appointment with my gyno I got diagnosed with Fibroids, I did my research and turns out yep, I had all the symptoms of fibroids but I had zero idea what they were or that I had them!

’80 per cent of Black women and 70 per cent of White women will get them in their lifetime but they often go undiagnosed or patients are too scared to have surgery….

‘Yesterday I had surgery, I had my fibroids removed, whilst undergoing surgery my doctor also noticed that I had endometrioses another common uterine disease in women that often goes undiagnosed.’ 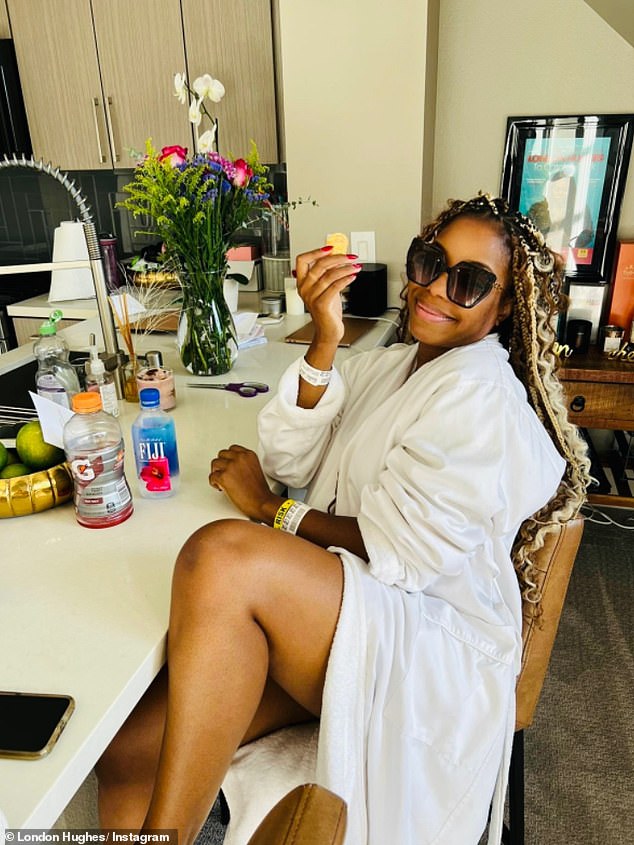 Taking time: London revealed she will be taking time off for two weeks while she recovers

Making light of the fact she was diagnosed with both conditions, she said: ‘Seriously, fibroids AND endometriosis, were they having a party down there or something?’

‘Anyway, four hours, four huge fibroids and part of my cervix removed later and my stomach now feels and looks like the dude from the Operation Game but I’m also completely off my tits on opioids right now so life is good.

Admitting she feels relieved she went ahead with the operation, she added: ‘Bottom line, I’m sooo glad I went forward with the surgery.’

London then shared a message to her ‘endo huns and fibroids queens’ to go and get themselves checked out if they think they have any symptoms. Encouraging them ‘not to take no for an answer’. 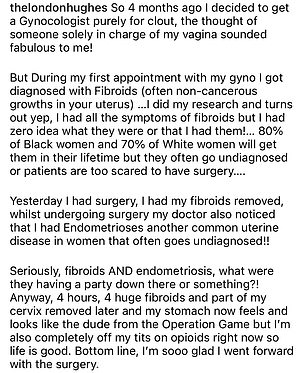 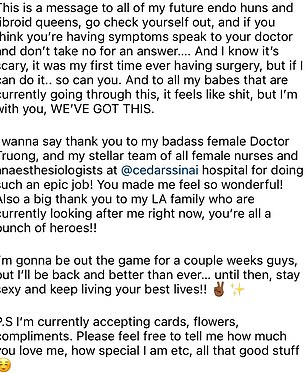 Revealing that she had no concerns and booked the gynaecologist appointment four months ago for he ‘clout’, London explained: ‘The thought of someone solely in charge of my vagina sounded fabulous to me!’

Endometriosis occurs when cells in the lining of the womb are found elsewhere in the body.

Each month, these cells react in the same way as those in the womb; building up, breaking down and bleeding. Yet, the blood has no way to escape the body.

Symptoms include pain, heavy periods and fatigue, as well as a higher risk of infertility, and bowel and bladder problems.

Its cause is unknown but may be genetic, related to problems with the immune system or exposure to chemicals.

Treatment focuses on pain relief and improving quality of life, which may include surgery or hormone treatment.

‘And I know it’s scary, it was my first time ever having surgery, but if I can do it.. so can you. And to all my babes that are currently going through this, it feels like shit, but I’m with you, WE’VE GOT THIS.’

Sharing her thanks to the medical team who looked after her, London said: ‘I wanna say thank you to my badass female Doctor Truong, and my stellar team of all female nurses and anaesthesiologists at hospital for doing such an epic job! You made me feel so wonderful! Also a big thank you to my LA family who are currently looking after me right now, you’re all a bunch of heroes!

‘I’m gonna be out the game for a couple weeks guys, but I’ll be back and better than ever… until then, stay sexy and keep living your best lives!

‘P.S I’m currently accepting cards, flowers, compliments. Please feel free to tell me how much you love me, how special I am etc, all that good stuff.’

London most recently performed at the Netflix Is A Joke: Festival.

Two years ago the British star relocation to Los Angeles, California, and wrote in a recent post: ‘I’ll always be a Londoner, but I’m definitely a Cali girl now.’

London has multiple feature films in development including comedy feature Hot Mess, with Will Packer Productions and Universal.

London has appeared in the BBC/Amazon award-winning and critically acclaimed series Fleabag and was also awarded the Royal Television Society Award for ‘Best Entertainment Performance’ for her work on ITV2’s hip-hop comedy quiz show. 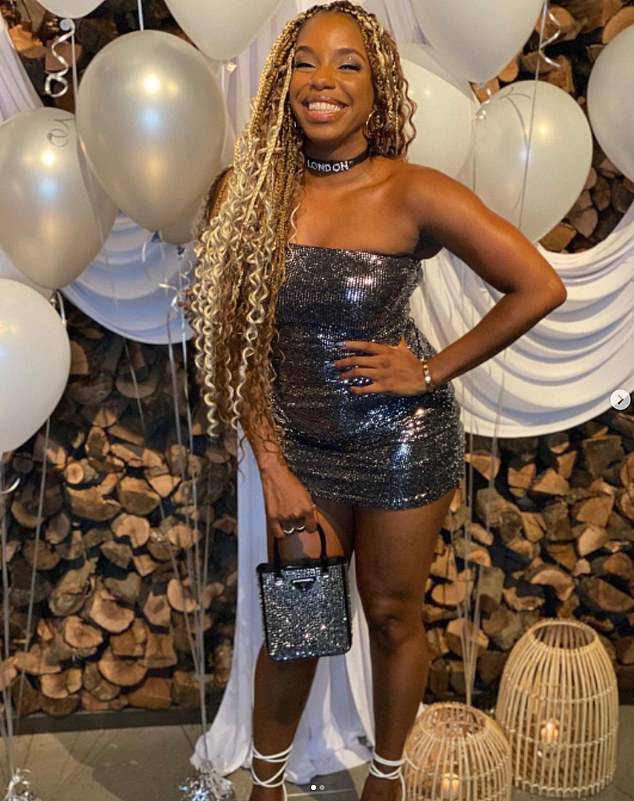 Career: London most recently performed at the Netflix Is A Joke: Festival

Fibroids are non-cancerous growths that develop in or around the womb (uterus).

The growths are made up of muscle and fibrous tissue, and vary in size. They’re sometimes known as uterine myomas or leiomyomas.

Many women are unaware they have fibroids because they do not have any symptoms.

Women who do have symptoms (around 1 in 3) may experience:

In rare cases, further complications caused by fibroids can affect pregnancy or cause infertility.