Crowds of left-wing campaigners clashed with cops on a London estate as police conducted an apparent raid to detain illegal immigrants.

More than 100 protesters gathered in Peckham, south London this afternoon in an attempt to halt the raid.

They chanted as cops took one man: ‘Let him go!’

Campaigners tweeted videos of the protest with the caption: ‘Come and join us.’ 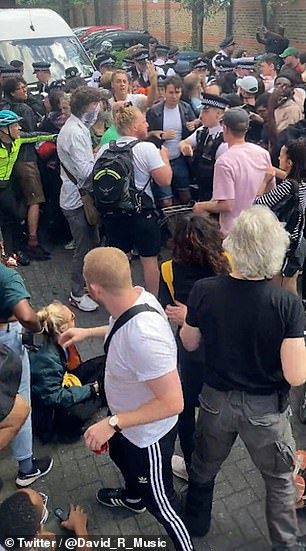 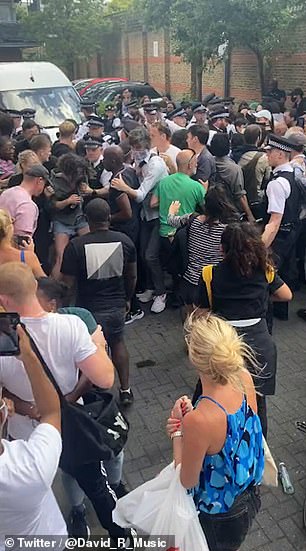 ‘Block the van from taking one of our neighbours – come and join us now on Evan Cook Close SE15!’

Other chants sung by the crowd included: ‘You say people, we say power, people power.’ 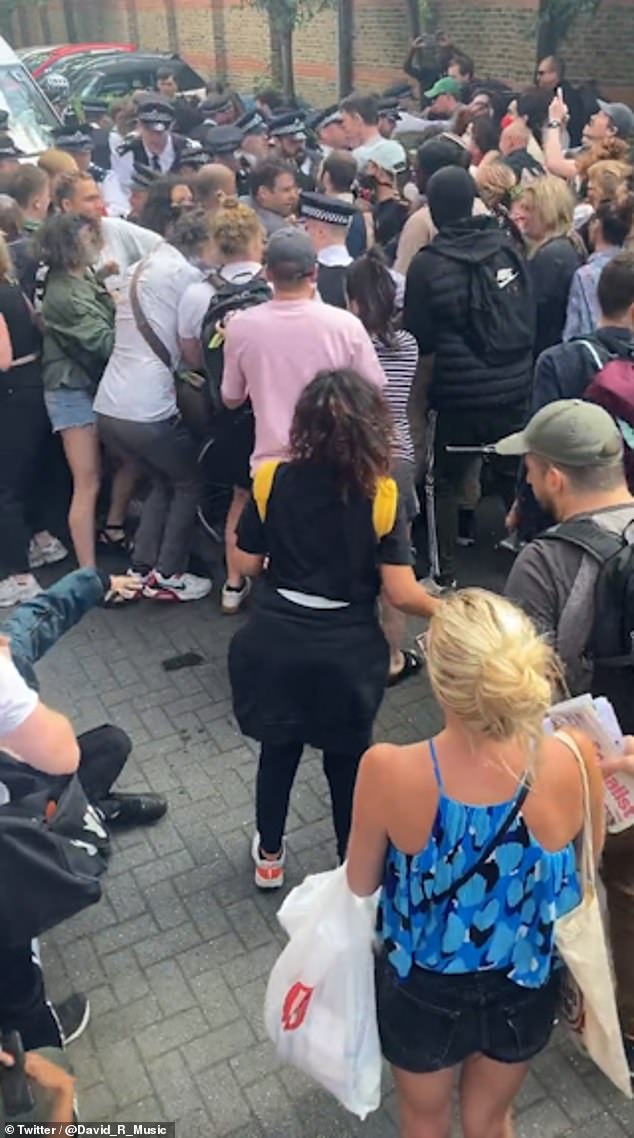 ‘Currently being blocked by a big crowd. Get down ASAP. Please RT or pass on the message.’ 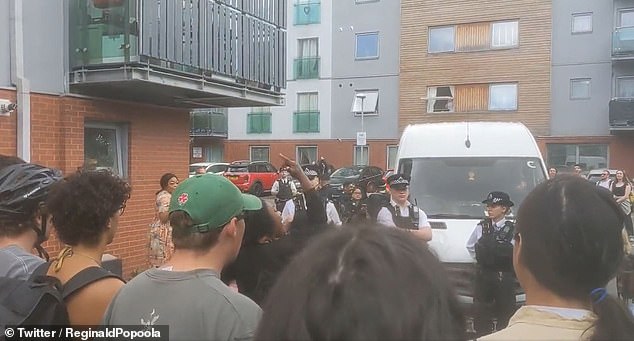 The raid appears to have started shortly after midday, with crowds assembling over the next two hours.

Tweets shared by local campaigners and councillors raised awareness about the event.

It’s not clear whether the protest has stopped the police from detaining any of the immigrants they are thought to be searching for. 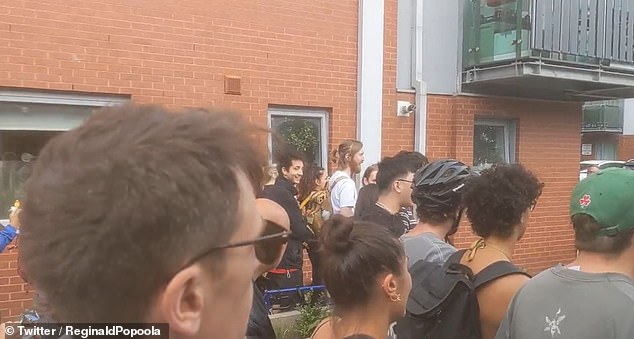 Labour councillors and local campaigners led the stoppage, urging others to join 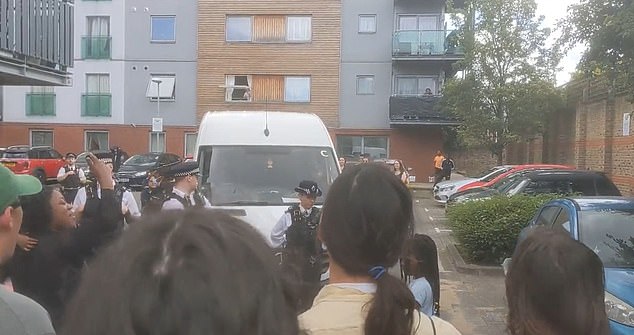 The revolt came as the first Home Office flight to Rwanda was set to go ahead on Tuesday.

The plans survived a bid by left-wing lawyers to halt the policy as a violation of human rights legislation.

A High Court judge last night threw out a bid to halt the first charter flight to Rwanda.

Mr Justice Swift said he had to balance the concerns of individual migrants with the wider public interest. 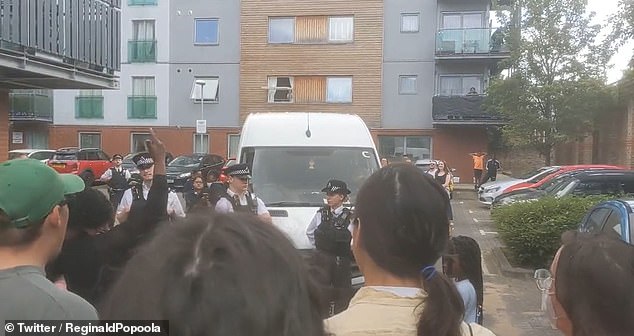 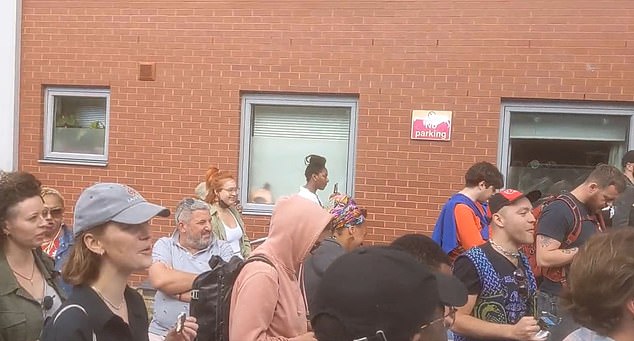 The Daily Mail learnt there has been friction between the heir to the throne and Boris Johnson, with each grumbling about the other being late for official appointments.

Allegations of tensions between the two men echo reports of the strained relationship between the Queen and Margaret Thatcher when she was PM.

A union representing Border Force staff and two charities claimed in the High Court yesterday that Rwanda was an unsafe country and Miss Patel was exceeding her powers as Home Secretary.

But rejecting their application for a temporary injunction blocking next week’s first flight, Mr Justice Swift said: ‘It is important for the secretary of state to be able to implement immigration control measures, and preventing that would be prejudicial to the public interest.’ 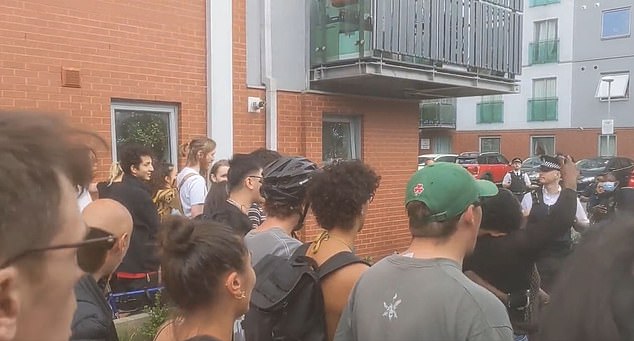 Despite opposition from the left, the government’s Rwanda plan will formally begin on Tuesday

Responding to the ruling, Mr Johnson said: ‘Welcome news from the High Court today. We cannot allow people traffickers to put lives at risk and our world-leading partnership will help break the business model of these ruthless criminals.’

Home Secretary Priti Patel, who insists the plan is crucial in preventing further deaths in the Channel, added: ‘I will now continue to deliver on progressing our world-leading migration partnership.’

The coalition that brought yesterday’s legal challenge was granted permission to appeal to the Court of Appeal.

That hearing is expected on Monday.

A separate application for an injunction is due to be heard by the High Court on Monday.

Further individual legal challenges are also expected to prevent the Home Office from removing migrants, most of whom crossed the Channel since May 1.

More than 90 from a pool of 130 migrants have already submitted claims – principally under the ‘right to private and family life’ and modern slavery laws – with more expected between now and Tuesday.

It emerged at yesterday’s hearing that 31 people are due on the first flight and the Home Office has agreed to withdraw five migrants from the passenger list.

‘A lot of people were waiting for the High Court ruling. We expect they will all put in individual claims now,’ a government source said.

‘There’s still a very real risk no one can be put on Tuesday’s flight.’

Demonstrations also took place against a repatriation flight to Jamaica, which ultimately took off with seven criminals onboard.

More than 100 were initially expected to take the flight, with just seven child rapists, drug dealers and other violent criminals ultimately taken.