Lord Sumption today said it was ‘very unsatisfactory’ that the decision had been taken behind closed doors – and by an as-of-yet unnamed judge – in Strasbourg.

The experienced judge, who served on the UK’s Supreme Court for six years from 2012 to 2018, said he believed there were ‘grounds’ to consider ‘modifying’ the operation of the European Convention on Human Rights.

But he said it was ‘ridiculous’ to do this off the back of last week’s Rwanda intervention.

He also said it was not a reason to pull out entirely from the convention – which Britain helped to establish in the wake of the Second World War.

His comments come following a string of criticism from Conservative politicians and ministers over the court’s decision to issue an eleventh hour injunction which effectively grounded the first Channel migrant deportation flight to Rwanda.

Today Attorney General Suella Braverman added her name to the list of those criticising the court.

Ms Braverman, a former practising barrister, said it should be down to ‘British people to decide who can and cannot stay in our country’.

She also said she had ‘significant reservations’ about the UK’s relationship with the ECHR – which is not linked to the European Union and which Britain remained a member of in the wake of Brexit.

But asked his view on the court’s decision and the fact it was made behind closed doors, Lord Sumption told LBC: ‘I think all of that is very unsatisfactory. But in itself it is not a reason for withdrawing from the human rights convention. 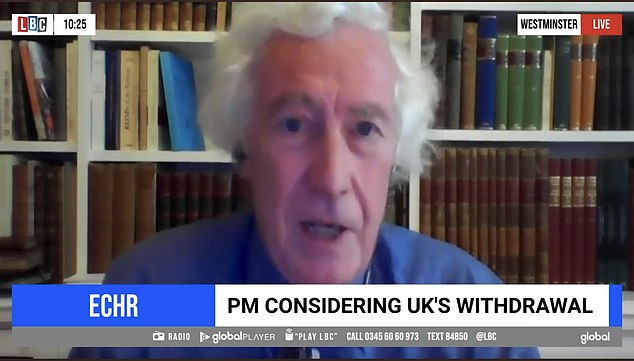 Lord Sumption (pictured speaking with LBC presenter Tom Swarbrick) today said it was ‘very unsatisfactory’ that the decision had been taken behind closed doors – and by as-of-yet unnamed judges – in Strasbourg. But he said it was ‘ridiculous’ to do this off the back of last week’s Rwanda intervention 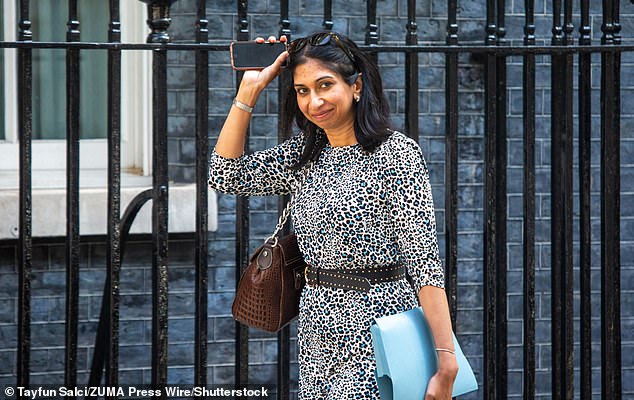 In the latest round of criticism, Attorney General Suella Braverman (pictured) said it was down to ‘ British people decide who can and cannot stay in our country’

‘There are, I think, reasons for at least modifying the operation of the human rights convention, but it is ridiculous to do this simply on the back of one, provisional, decision because it is not a decision on the merits of the Rwanda scheme, but simply on how to hold the fort until it’s properly decided in July.

‘I don’t really think that’s a sensible basis on which to decide to revise the human rights convention but there are much larger problems that should be looked at over a much wider-range of issues over a much longer period than the last week.’

He said the power to issue temporary injunctions, such as the one issued by the court on Tuesday that effectively grounded the UK’s Rwanda flight, was a power the court ‘awarded themselves’ rather than one put into the convention.

Asked if he felt there was a ‘democratic deficit’ in the system, he said: ‘I think the problem is the human rights convention requires the court to decide whether it is desirable to depart from human rights law in the interest of some other important interests – for example the suppression of crime or the control of public finances or something like that.’

He said the convention allowed Governments to depart from these norms in the interest of wider society.

Lord Sumption added: ‘These are classically politically issues – do we want more privacy and less effective crime prevention – people will differ about that – how do we resolve these differences in a democracy?

‘We do that through our elected representatives – not by transferring to judges who are quite rightly not politically responsible to anyone.’ 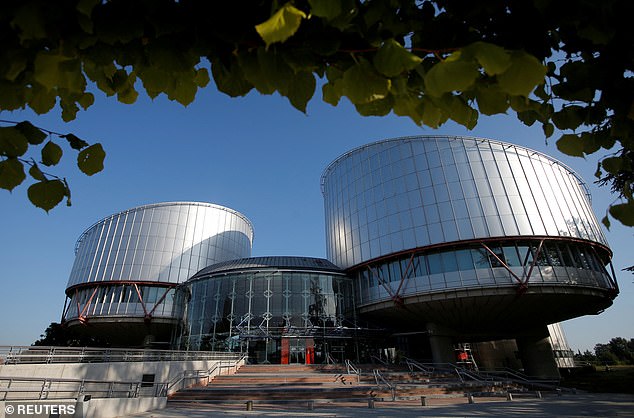 A spokesman for the ECHR – which was founded by the Council of Europe and bears no relation to the EU – previously told MailOnline they would not be naming the judge, claiming this was their policy on interim injunctions such as these 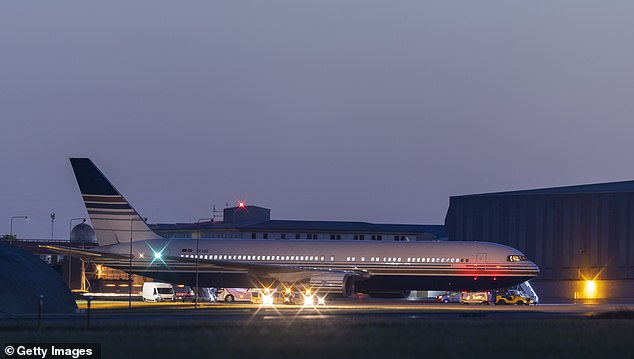 The so-far anonymous judge signed off an urgent 11th hour injunction from the ECHR to an asylum seeker set to be flown to Rwanda – despite UK courts saying the flight could go ahead. Pictured: Members of the staff board a plane reported by British media to be first to transport migrants to Rwanda, at MOD Boscombe Down base in Wiltshire

His comments come as Ms Braverman said it is ‘time to complete Brexit and let the British people decide who can and cannot stay in our country’ following Tuesday’s ruling.

‘This is still a topic being discussed in Government but I have significant reservations about our relationship with the European Court of Human Rights,’ she said in comments carried by the Daily Express.

‘In the EU referendum the British people voted to take back control of our laws.

‘They are rightly baffled why our immigration controls can still be blocked by European judges.

‘It’s time to complete Brexit and let the British people decide who can and cannot stay in our country.’

Home Secretary Priti has previously described the court’s decision as politically motivated, while Justice Secretary Dominic Raab said it was wrong for the injunction to be granted.

The row has led to calls from some Tory MPs to pull out of the European Convention on Human Rights (ECHR), the document interpreted by the court in Strasbourg – something which No 10 and Ms Braverman have not ruled out, although it appears unlikely the Government would want to take such a drastic step.

Mr Raab has said the UK would stay within the convention but new laws could ensure that interim measures from the Strasbourg court could effectively be ignored by the Government.

The Government plans to replace the Human Rights Act, which enshrines the ECHR in domestic law, with a new Bill of Rights.

Ongoing court battles have created uncertainty over when any further attempts to fly asylum seekers to the African country will be made, although Ms Patel has previously said the Government ‘will not be deterred from doing the right thing, we will not be put off by the inevitable last-minute legal challenges’.