A star-studded Los Angeles high school is being sued by a parent for its allegedly ‘racially divisive, anti-Semitic’ curriculum – and may soon face more lawsuits, the parent’s lawyer claims.

In a lawsuit filed in a Los Angeles court on Wednesday, a Jewish parent of a former 8th grade student at the $50,000-per-year school said the girl was booted after he complained about alleged anti-semitic discrimination in its new woke curriculum installed after the death of George Floyd.

The school says the claims are ‘baseless’ and a ‘work of whole fiction’. A parent whose daughter attended Brentwood School, a private K-12 school, is suing after she was kicked out of the $50,000-a-year school, pictured above 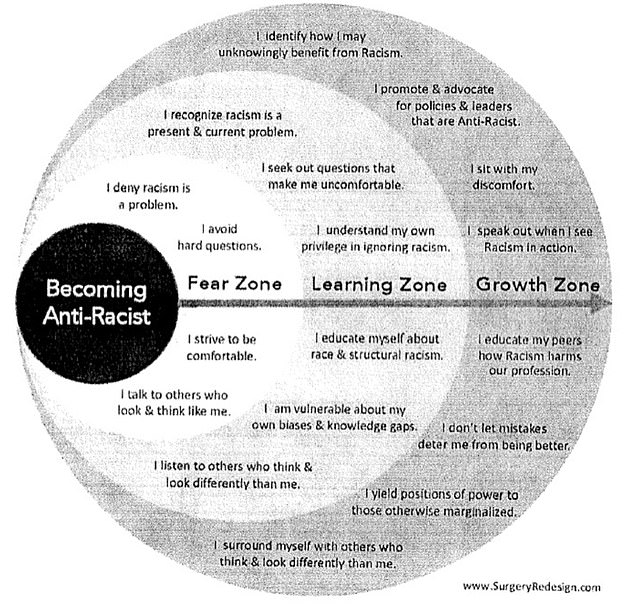 Parent, Jerome Eisenberg claims the new woke curriculum came after the death of George Floyd which included charts for students so they could become ‘anti-racist’ 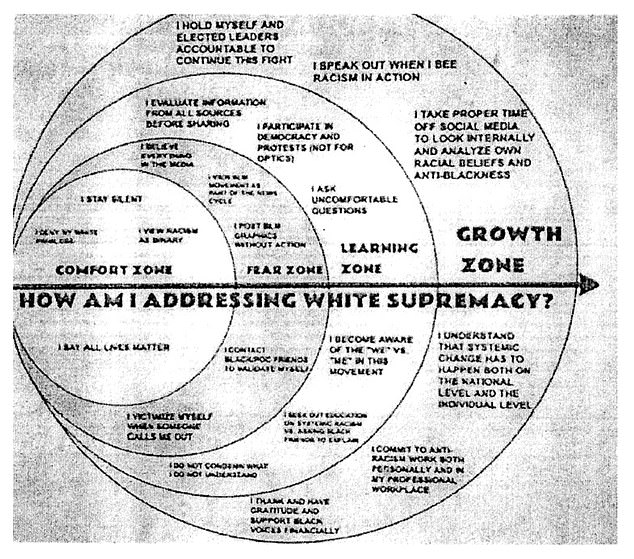 Frustrated father Jerome Eisenberg is suing the school for breach of contract, violation of the Unruh Civil Rights Act – which protects individuals from discrimination by California businesses – and intentional infliction of emotional distress, among other claims.

The news of the lawsuit being filed was first published by LA site The Ankler.

Eisenberg said he was happy with the school until the summer of 2020, when the death of George Floyd at the hands of a Minneapolis police officer led to an alleged ideological overhaul of the school’s policies and teaching.

He accused the school of holding racially segregated meetings, encouraging students to treat Jewish people as ‘oppressors’, and discriminating against a Jewish group of parents.

‘Everything at Brentwood radically changed after the death of George Floyd,’ the lawsuit said.

‘After accepting parents’ tuition payments, Defendants Brentwood and its head of school, Michael Riera, pulled a bait-and-switch with the school’s curriculum and culture.’ 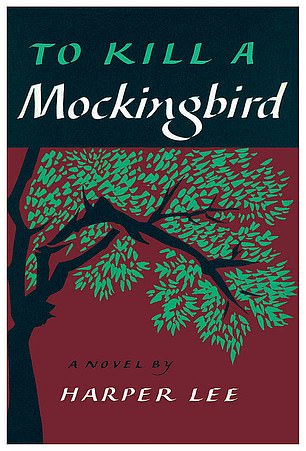 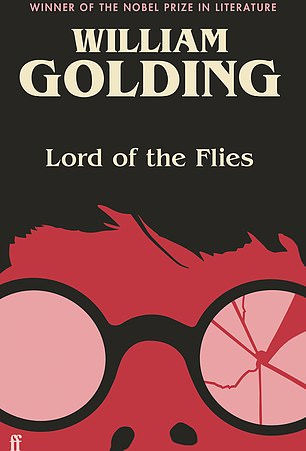 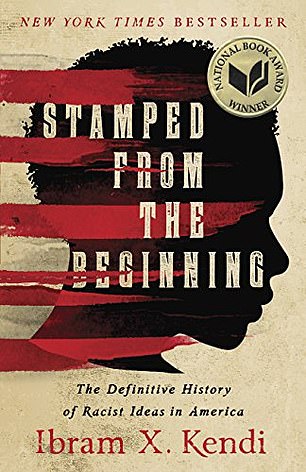 The texts have been replaced by Ibram X. Kendi’s Stamped, which Eisenberg said included ‘ahistorical, racially inflammatory perspectives on this country’s history with no legitimate pedagogical purpose.’

Eisenberg claimed the school replaced its traditional teaching with ‘an identity-based ideology of grievance, resentment, and racial divisiveness’ and ‘started indoctrinating [students] into what to think, based on Brentwood’s preferred political fad of the moment.’

In the girl’s literature class, To Kill a Mockingbird and Lord of the Flies were replaced by Ibram X. Kendi’s Stamped, which Eisenberg said included ‘ahistorical, racially inflammatory perspectives on this country’s history with no legitimate pedagogical purpose.’

‘[The] English Department told parents that if they wanted their children to read Shakespeare or Hemingway, they should do it in their own free time,’ the legal complaint said.

The changes were made secretly and ‘withheld from parents’, Eisenberg claimed, while Jewish parents were ‘prevented from participating in the school’s policy-making decisions’ due to the school’s alleged ‘anti-Semitic animus’.

A source close to the dispute told DailyMail.com that 40% of Brentwood students were Jewish and claimed that Eisenberg was in a tiny minority of disgruntled parents.

‘The curriculum changes have not affected interest in Brentwood. In fact, more people have wanted to come to Brentwood than ever before,’ the source said.

A parent at the school, who also asked to remain anonymous, said: ‘​​It’s only a few parents who have a problem with the changes to the curriculum.  The students by and large, including my own, have no problem with it.’

The parent said they didn’t trust Eisenberg, having discovered he had previous charges for fraud dating back to the 1990s.

According to a 1993 LA Times article, Eisenberg and his realtor client were charged with improperly inflated real estate values in loan transactions allowing them to obtain $6million.

According to federal court records, Eisenberg, a former lawyer, pleaded guilty to mail fraud and bank embezzlement in 2000, was sentenced to a year in prison and resigned from the California bar.

Eisenberg’s lawyer claimed that the furious father is just the first in a growing number of parents considering legal action against the school.

‘I can tell you for a fact that there are dozens of parents who support what Jerry’s doing,’ attorney David Pivorak told DailyMail.com in an exclusive interview. ‘Jerome Eisenberg is by far not not alone in this.’

He added that other parents had approached him for representation, and that ‘it’s not out of the question’ that Eisenberg’s complaint would become a class action lawsuit.

Pivorak added that the girl’s removal from Brentwood School was ‘devastating’ to her.

‘For someone her age, 13 or 14, it’s jarring and it’s devastating, because you’re no longer with your friends. You have to completely reorganize your life. It’s tough having to make new friends, especially for a young girl,’ he said.

‘When you’re suddenly pulled away from [your community] because your school decides to discriminate against you and single out your group, and you’re punished because of that, it’s kind of jarring.’

Pivorak said he believes parents are afraid to speak out against woke new curricula for fear of being ‘canceled’.

‘You have a lot of very unhappy parents who, in woke progressive LA, are terrified to stand up and oppose this stuff,’ he said.

‘Not only are they afraid to lose their social standing, but they’re also afraid of what’s going to happen to their kids, their college admissions letters and their ability to proceed in life.’ 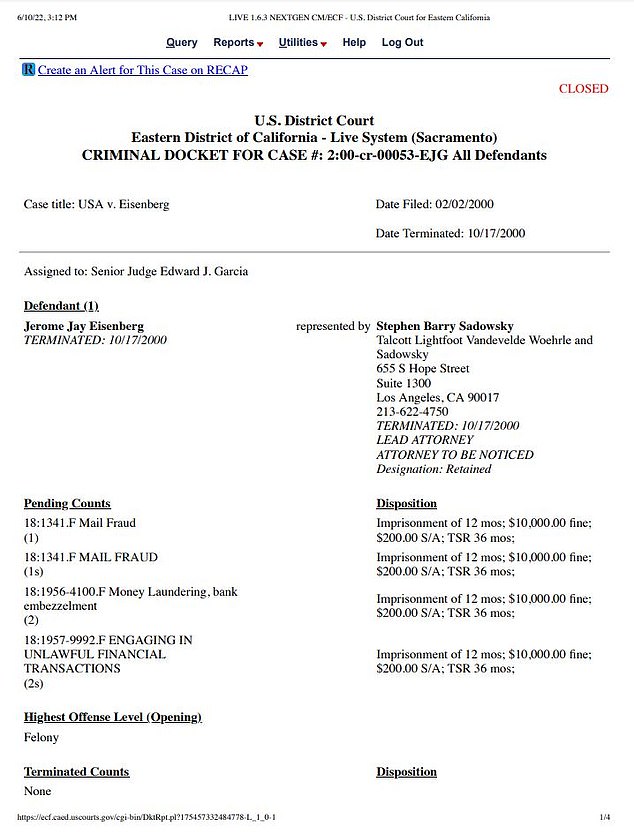 According to federal court records, Eisenberg, a former lawyer, pleaded guilty to mail fraud and bank embezzlement in 2000, was sentenced to a year in prison and resigned from the California bar, pictured above 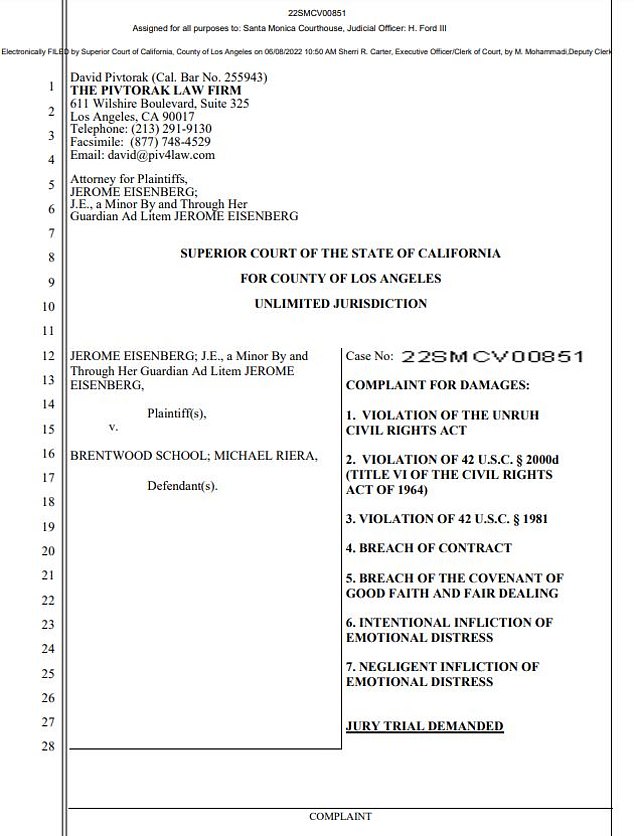 In his lawsuit, pictured above, Eisenberg claimed the headteacher told him ‘a ‘new world order’ was coming and that if Defendants failed to capture the students at this juncture the opportunity might be lost going forward.’

In his lawsuit, Eisenberg claimed the headteacher told him ‘a ‘new world order’ was coming and that if Defendants failed to capture the students at this juncture the opportunity might be lost going forward.’

As part of consulting on changes at the school, ‘affinity groups’ were formed made up of parents, students and community members bound by ‘shared culture, race, or other identity’ to influence Brentwood policy, according to the legal filing.

The father said the Jewish affinity group was ‘intentionally stifled’, ‘stonewalled’ and treated differently than other groups.

He claimed the alleged discrimination was part of a new ideology taught at the school that treats Jewish people as ‘oppressors’ due to their ‘proximity to whiteness’ while ‘ignoring the actual treatment of Jews around the globe throughout all of recorded history.’

‘Young students were also given a chart called ‘How am I Addressing White Supremacy’ that accuses them of ‘racism’ and ‘anti-blackness’ based purely on the color of their skin,’ Eisenberg’s lawsuit said.

‘Teachers also began openly humiliating students who did not adhere to their preferred political beliefs.’

Eisenberg claimed that when he called out the school for the alleged discrimination, his daughter was punished. 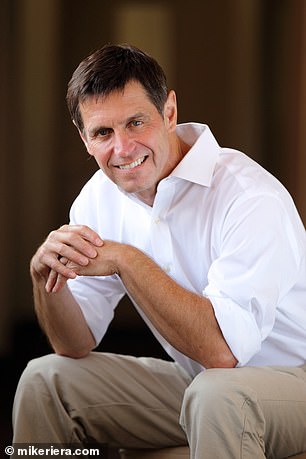 In a statement to DailyMail.com, a Brentwood spokesman said: ‘The allegations contained in the complaint are baseless, a work of whole fiction and nothing more than a desperate attempt to embarrass the school. The school’s head, Mike Riera, is pictured, above

‘Mr. Eisenberg pleaded with defendants to stop their racially discriminatory conduct and to reinstate the race-neutral policies that they promised to uphold when they entered into their agreement,’ his lawyer David Pivtorak wrote in the legal complaint.

‘Defendant Riera responded to Mr. Eisenberg’s pleas by withdrawing J.E.’s invitation to return to Brentwood for 9th grade and threatening to expel her from the school immediately unless Mr. Eisenberg promised to stay silent about defendants’ virulent discrimination.

‘Mr. Eisenberg had no choice but to give in to Riera’s extortionate demands in order to protect his daughter’s future. ‘Although J.E. was allowed to finish her 8th grade year at Brentwood, Riera revoked the school’s offer to return for 9th grade. As a result J.E. was deprived of attending school with the friends she loved and the community she knew.’

In a statement to DailyMail.com, a Brentwood spokesman said: ‘The allegations contained in the complaint are baseless, a work of whole fiction and nothing more than a desperate attempt to embarrass the school.

‘The plaintiff’s arguments are unsupported by actual facts and we look forward to proving that in court.’