Just Stop Oil protestors are blocking the M25 in two areas and have promised to disrupt the motorway all week as they predict record temperatures mean ‘society will collapse in 20 years’.

Activists have scaled a gantries over the M25 around Junction 10 between Cobham and Guildford – causing nine miles of traffic and hour-long delays.

A similar demonstration is also taking place at the Poyle Interchange between Junction 14 and Junction 15 today, with pictures showing gridlocked traffic in the area.

In a statement released shortly before the demonstrations, Just Stop Oil said it was ‘declaring the M25 a site of civil resistance’ this week.

Protestors also asked that ‘no one travels on this motorway from Wednesday to Friday this week as we will be blocking the highway’.

The statement added: ‘We fully acknowledge the cost and disruption this will cause to the public and ask that they take their demands for compensation to the government which has caused this unprecedented threat to our lives and liberties.’

And at the site today, two of the protestors said: ‘We are currently on a gantry above the M25. It is very loud up here and very windy. We have dropped a banner over the edge, securely tied, that says Just Stop Oil because that is what our government must do.

‘It must stop new oil and gas licences in the North Sea. We are risking our civil liberty being up here, we do not want to be up here, but we feel it is what we must do.’

Surrey Police has confirmed that officers are currently at the scene dealing with the protest.

A spokesperson for the force added: ‘We’re dealing with a protest on the M25 just past junction 10 of the anti-clockwise carriageway this morning. Three lanes are currently closed.

‘We will keep you informed of further updates. In the meantime please avoid the area.’ 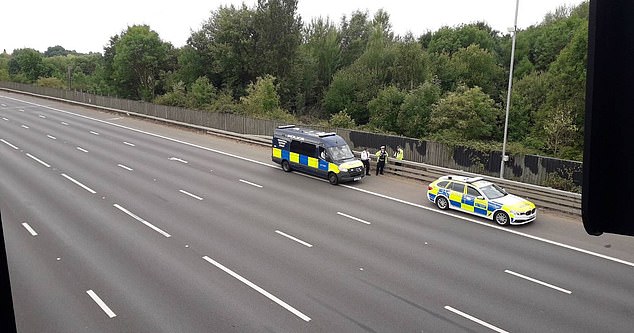 Surrey Police has confirmed officers are currently at the scene dealing with the protest, which has closed three lanes of the motorway 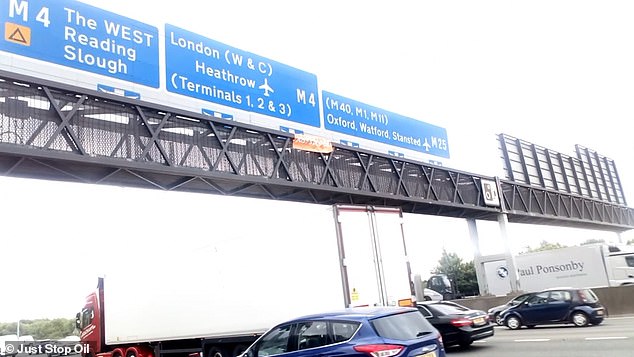 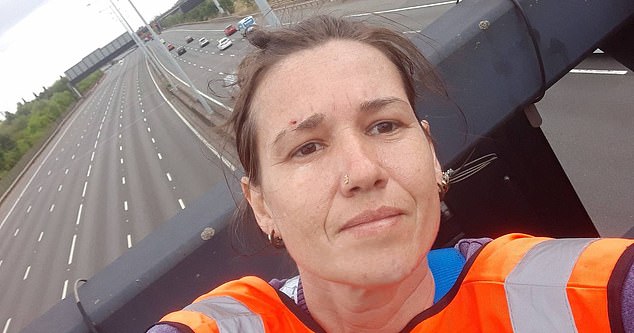 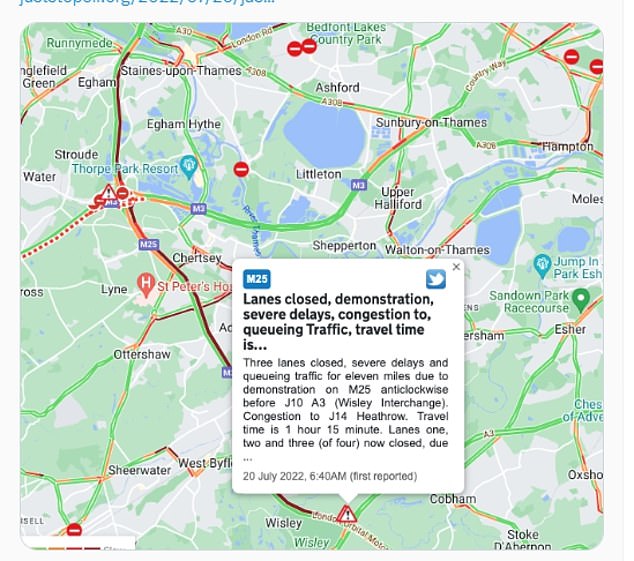 Highways England tweeted: ‘3 lanes (of 4) are now closed on the M25 anti-clockwise in Surrey within J10 (A3 for Guildford) due to an ongoing Surrey Police led incident.

‘This incident is likely to be ongoing for some time. There’s now over a 60 minute delay on approach with 9 miles of congestion.’

He said: ‘We respect people’s right to protest. However, protesting on the strategic road network is extremely dangerous, not just for the protesters but for people using the roads.

‘Along with the police and other partners, we are working hard to limit the effects of protests on the strategic road network.’

It comes as the nearby M3 westbound is currently closed following a fatal crash in the early hours of the morning.

A 69-year-old man and 67-year-old woman both died at the scene after their car collided with the central reservation at around 12.45am.

Their next of kin are aware and are being supported by specialist officers.

The latest Just Stop Oil demonstrations have been brought on following a heatwave that saw the UK record its hottest ever day on Tuesday.

A Just Oil spokesperson added: ‘The main thing is, we’ve just seen 40-degree temperatures, which have been predicted for decades, maybe it’s happening a bit faster, but it has just revealed how inadequate the Government’s preparations for climate change are and their entire policy, and basically, we’re just saying, it’s evident now we cannot continue.’

The group demands the government make a ‘meaningful statement’ that they will commit to stop licensing and consents for the exploration, development and production of fossil fuels in the UK, which they say is ‘the necessary first step to ensuring a liveable future’.

Just Stop Oil will march and take part in a sit down protest in Westminster on Saturday ‘with thousands of ordinary people’ to create ‘mass civil resistance’.

Today’s protest comes two week after activists from the same group glued themselves to the frame of a copy of Leonardo da Vinci’s The Last Supper at the Royal Academy of Arts in London. 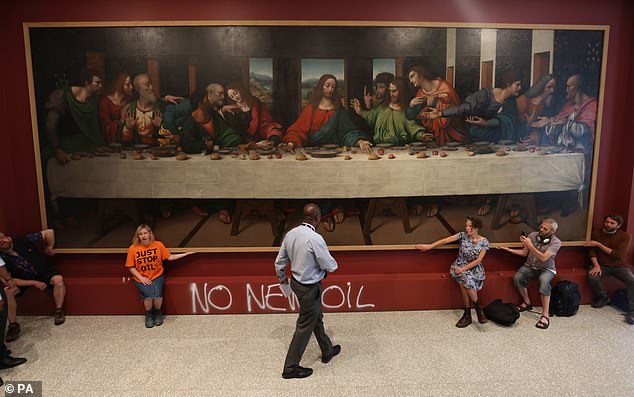 Extinction Rebellion co-founder Simon Bramwell was among those involved on July 5, along with fellow XR activist Caspar Hughes.

Just Stop Oil also named three of the protesters as Jessica Agar, 21, an art student from Hereford; Tristan Strange, 40, a community organiser from Swindon; and Lucy Porter, 47, a former teacher from Leeds.

The activists entered The Collection Gallery at the Royal Academy just and glued their hands to the base of the painting.

Security quickly responded and cleared visitors away before trying to prise the activists off the artwork. Police arrived nearly an hour later and arrested them on suspicion of criminal damage.

That action took place days after protestors glued themselves to works by JMW Turner, Vincent van Gogh and Horatio McCulloch in London, Glasgow and Manchester to warn against ‘a future of suffering’.

On July 3 Just Stop Oil activists stormed the track of the British Grand Prix at Silverstone.

Pictures from trackside showed a small group of protesters, each wearing an orange top, sitting in the middle of the track before being forcibly removed by police.

The people on the track are believed to have been Louis McKechnie, 21, from Weymouth, Bethany Mogie, 40, from St Albans, Joshua Smith, 29, a bricklayer from Manchester, and Alasdair Gibson, 21, from Aberdeen.