Maisie Smith and Jake Wood have led the tributes to EastEnders icon June Brown after her death at the age of 95 was confirmed by the BBC on Monday afternoon.

The actress, a mother-of-six, died at her home in Surrey on Sunday with her family by her side, two years after her final appearance as chain-smoking Dot Cotton, a role she played for 35 years.

Taking to Instagram, Maisie – who departed the soap in 2021 after becoming a household name as Tiffany Butcher – shared a behind-the-scenes photo of herself during her early years on the soap alongside screen veteran June.

Captioning the photo, she wrote: ‘Beautiful inside and out. Rest in peace June Brown.’ 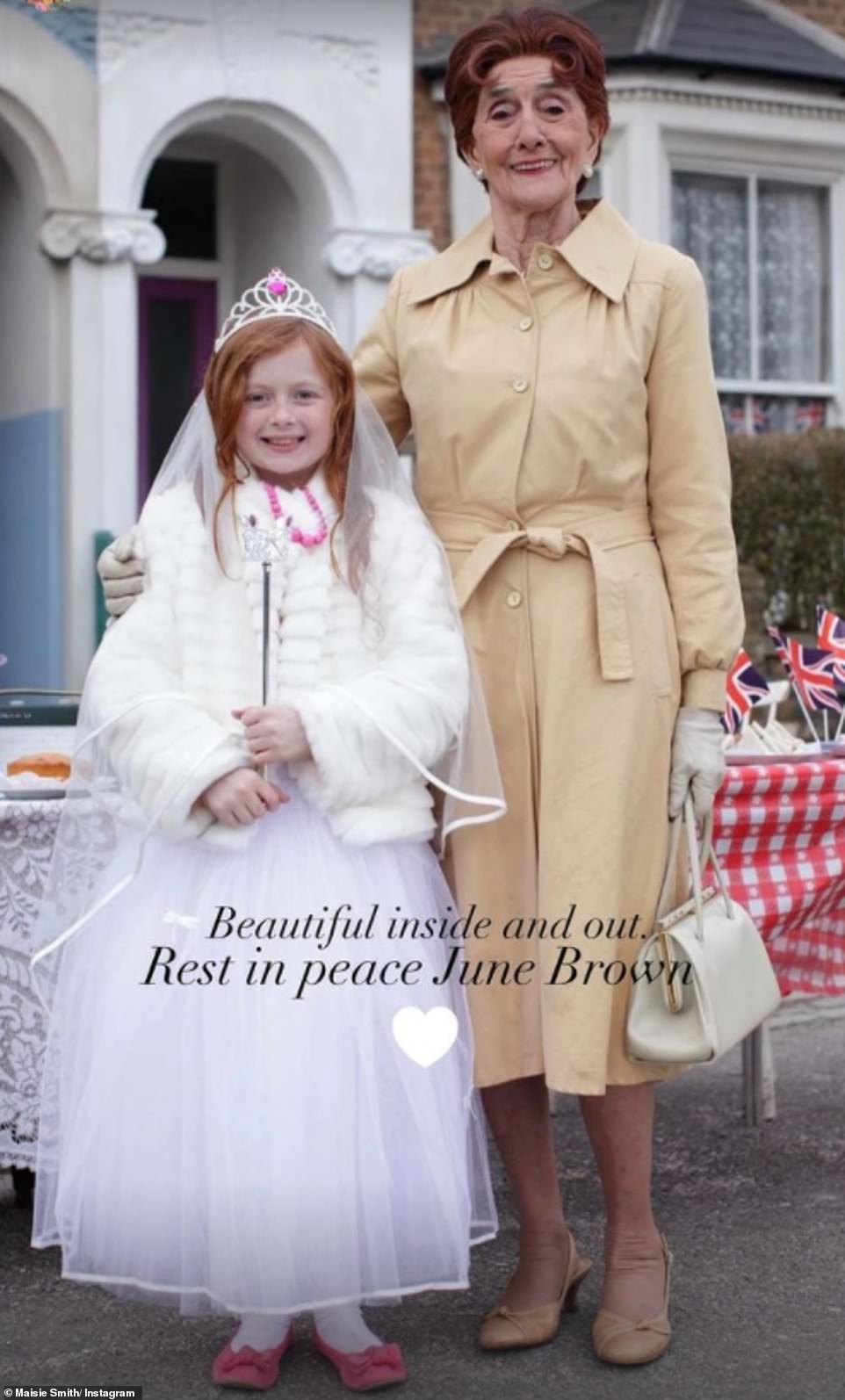 Rest in peace: Maisie Smit has led the tributes to EastEnders icon June Brown after her death at the age of 95 was confirmed by the BBC on Monday afternoon

Remembering the actress during her years on the show, Jake Wood – best known for his role as Max Branning – shared a photo of Brown on set as she prepared to shoot a scene.

He wrote: ‘RIP June. Here she is on set in her element. A true pro and EastEnders legend. Lucky to have met and worked with her, I’ll always remember her kindness and the many laughs.’

On-screen granddaughter Milly Zero paid tribute to the actress with a series of images, among them a backstage shot of Brown’s legendary meeting with Lady Gaga on The Graham Norton Show.

In an accompanying caption, the actress – who plays Dotty Cotton on the long-running  soap – paid tribute to her ‘Grandma Dot.’

She added: ‘I have never met anyone who cared about their craft so deeply. An artist, a national treasure, an icon & an inspiration to us all. You will always live on in the hearts of everybody you touched. There will never be anyone quite like June

‘A huge, huge loss. Today and always my thoughts are with her family, friends & the whole team at @eastenders.’ 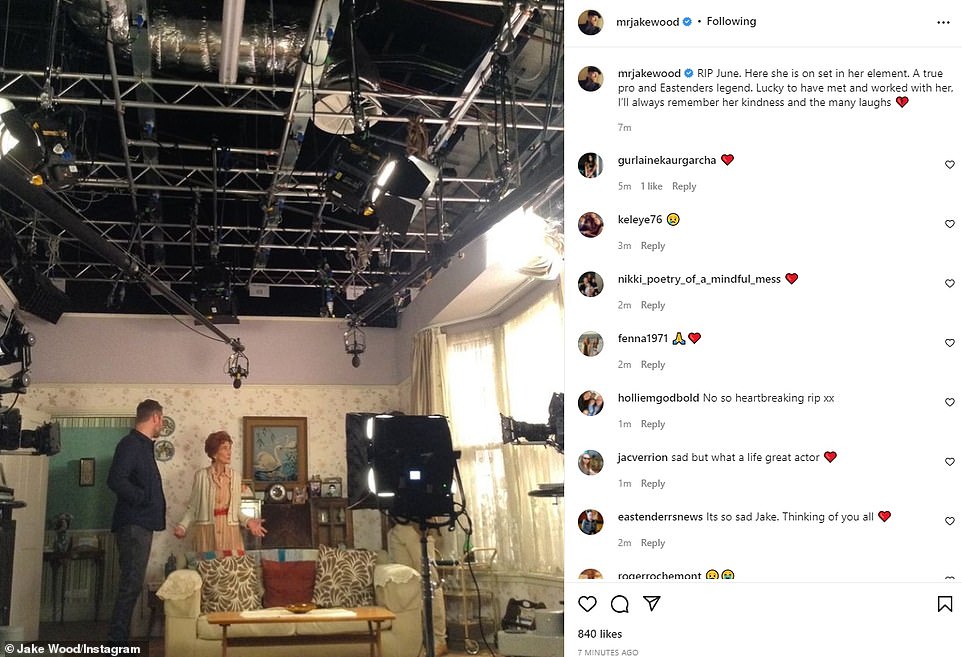 Tragic: Remembering the actress during her years on the show, Jake Wood – best known for his role as Max Branning – shared a photo of Brown on set as she prepared to shoot a scene 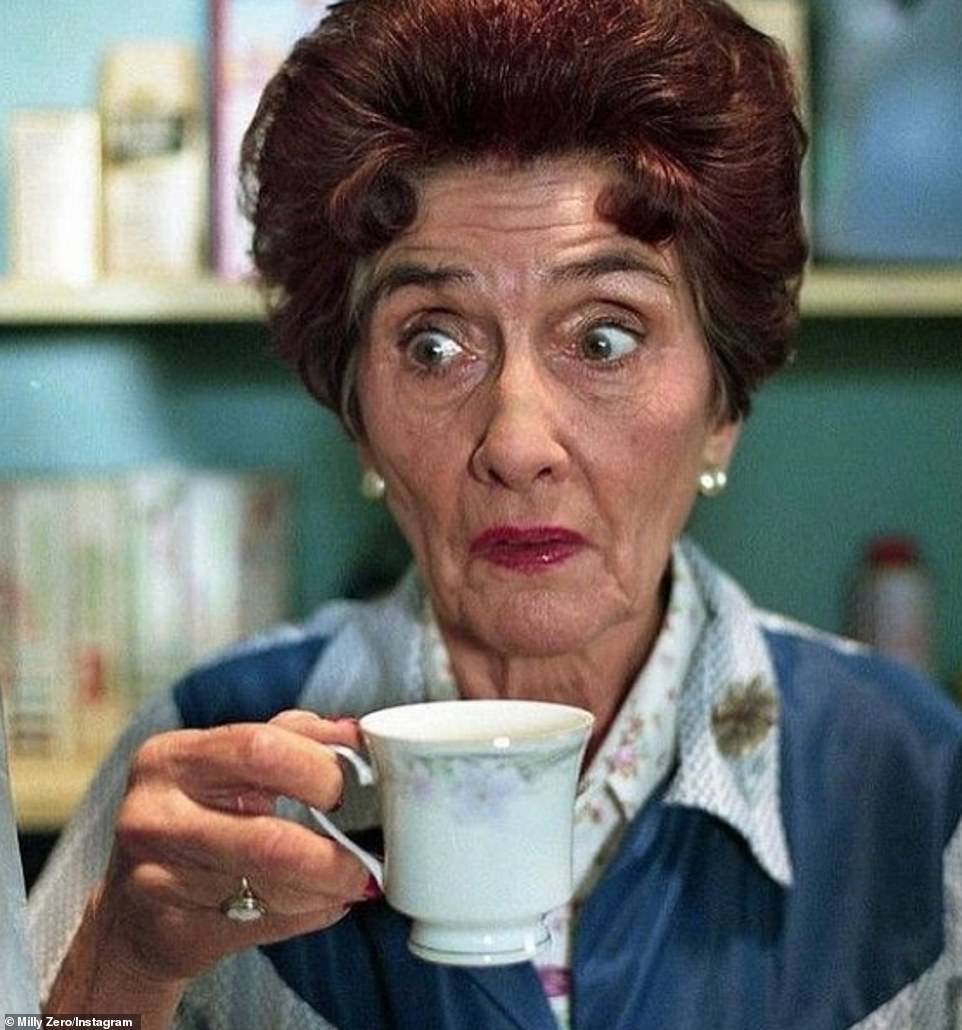 Gone but not forgotten: Current cast-member Milly Zero remembered the actress in a series of images, among them a shot of June during her legendary meeting with Lady Gaga on The Graham Norton Show

Adam Woodyatt, the show’s longest serving cast-member as Ian Beale, remembered the actress fondly alongside a photo of Brown taken during her EastEnders heyday.

He wrote: ‘I’m lost for words, something June never was. So many memories, so much fun. Just purely and simply an incredible woman who had the most incredible life and career, I was fortunate to have shared a small part of it. They never made you a Dame (we did try), but to me you will always be Dame Brown.’

Former cast-member Jacqueline Jossa – best known for her role as Lauren Branning – wrote: ‘I am so heartbroken. You will be so missed. Sharing the screen with you, a family with you, was a dream come true, something I will never ever forget.

‘Most of all though, your stories, your humour and just such calming words when I needed them. You made my joining the show so welcoming. I will keep these memories close to my heart. Rest in peace June.’ 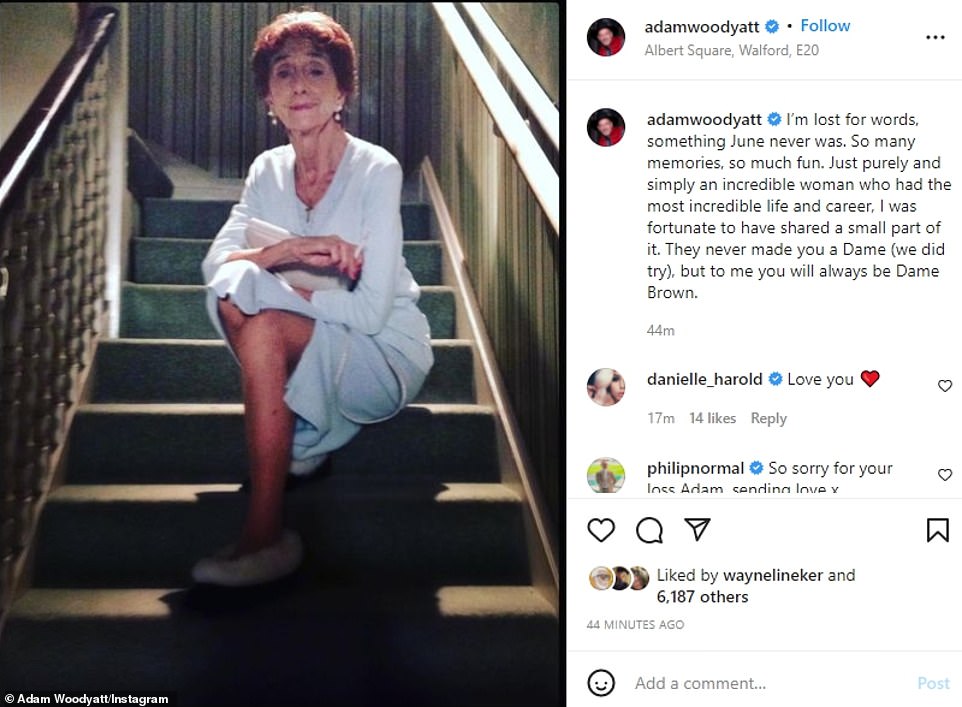 Devastated: Adam Woodyatt, the show’s longest serving cast-member as Ian Beale, remembered the actress fondly alongside a photo of Brown taken during her EastEnders heyday 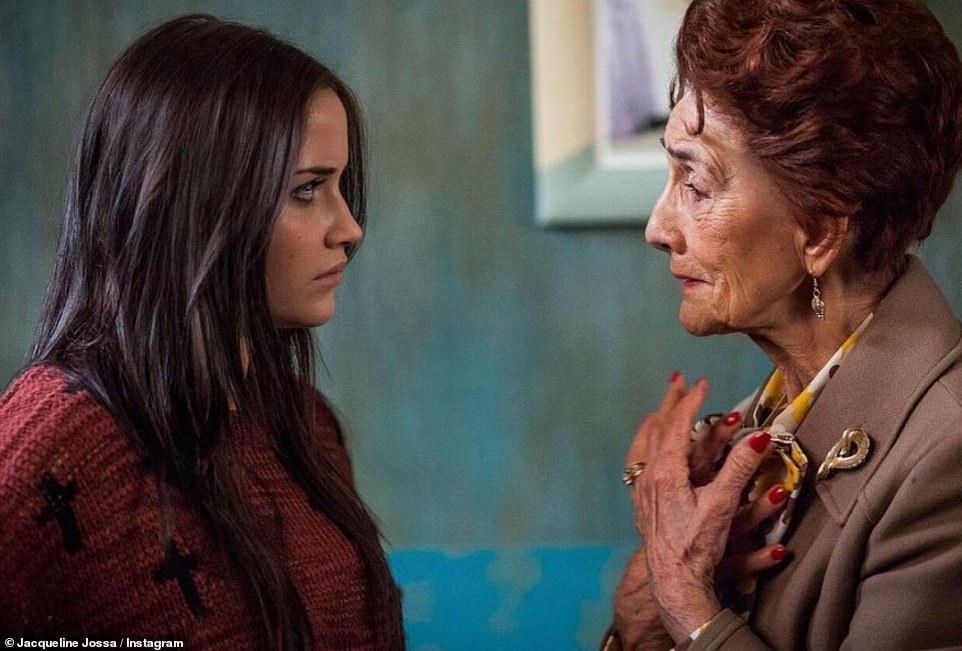 For decades Brown was one of the most famous faces on British TV, playing the devout Christian famed on Albert Square for her chain smoking, gossiping and mothering of those in need.

Her relationship with her tearaway son Nasty Nick Cotton, John Altman, who she forgave and forgave for his crimes until she gave up on him and he died after consuming a bad batch of heroin bought for him by his very own mother.

Her loving relationship with Jim Branning, played by John Bardon, would captivate millions, leaving fans in tears as she said goodbye to him following a stroke.

Brown’s family revealed she died peacefully last night while the BBC urged fans to raise a glass of sweet sherry in her memory. The star still loved a tipple and a cigarette well into her 90s. 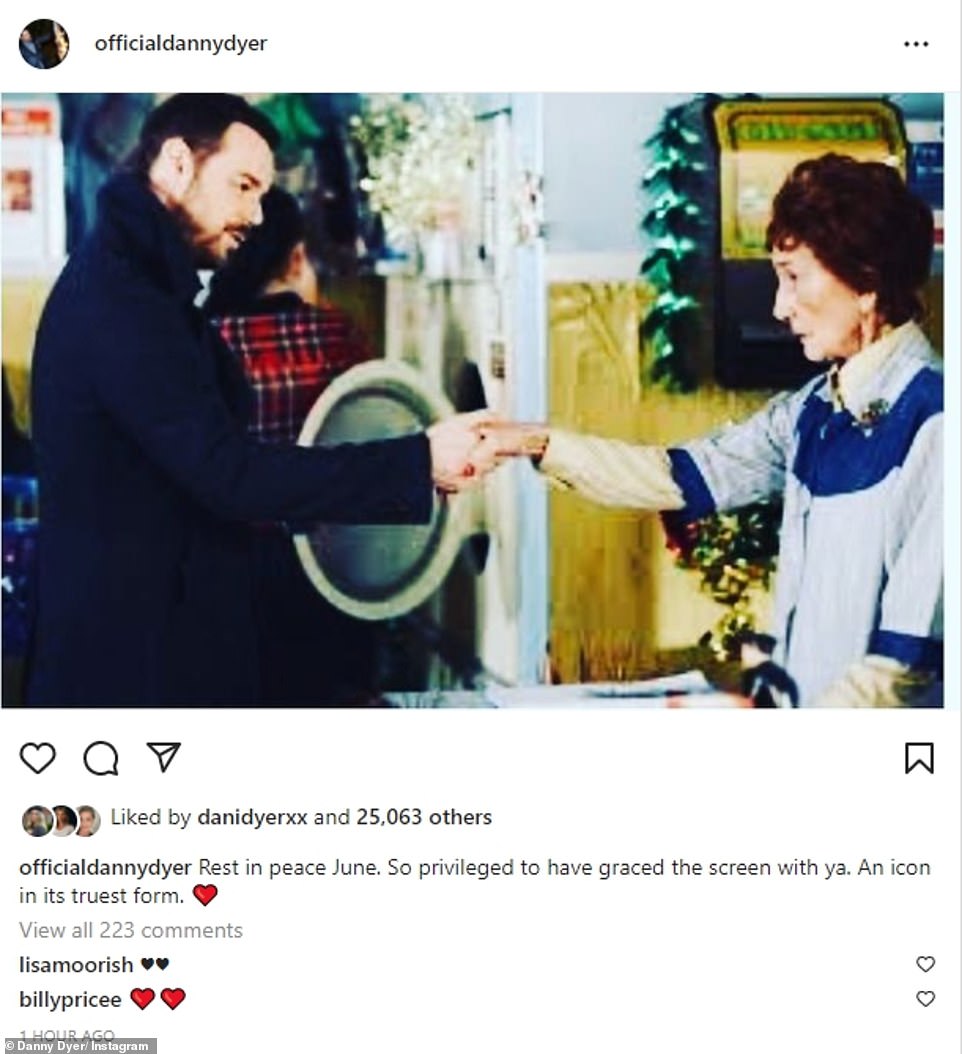 Privileged: Current cast-member Danny Dyer admitted it was an honour to share the screen with the legendary actress 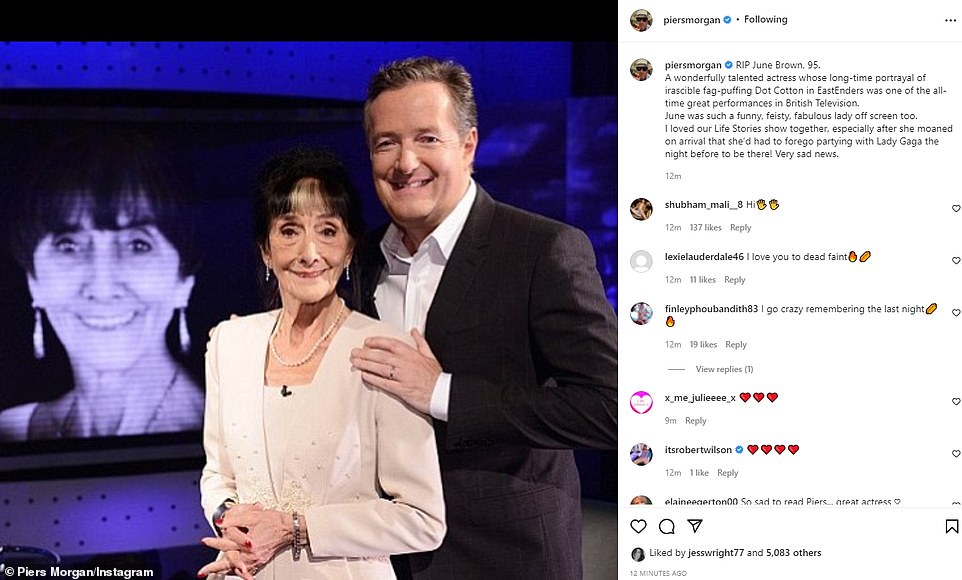 An EastEnders spokesman said: ‘We are deeply saddened to announce that our beloved June Brown, OBE, MBE, sadly passed away last night.

‘There are not enough words to describe how much June was loved and adored by everyone at EastEnders, her loving warmth, wit and great humour will never be forgotten.

‘June created one of the most iconic characters in Dot Cotton, not just in soap but in British television, and having appeared in 2,884 episodes, June’s remarkable performances created some of EastEnders’ finest moments.

‘We send all our love and deepest sympathies to June’s family and friends. A very bright light has gone out at EastEnders today but we shall all be raising a sweet sherry in June’s memory.

‘Rest in peace, our dearest June. You will never be forgotten.’ 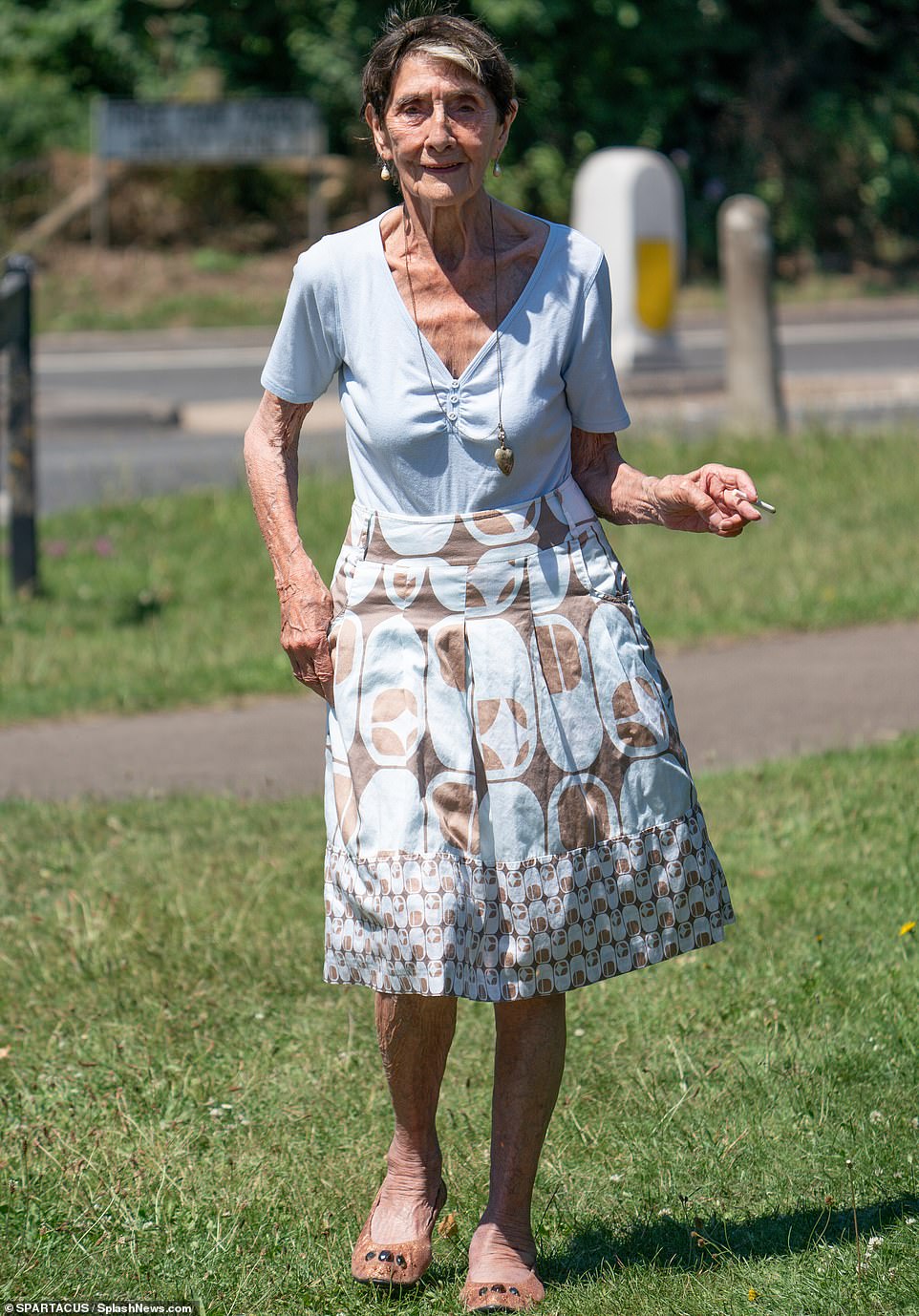 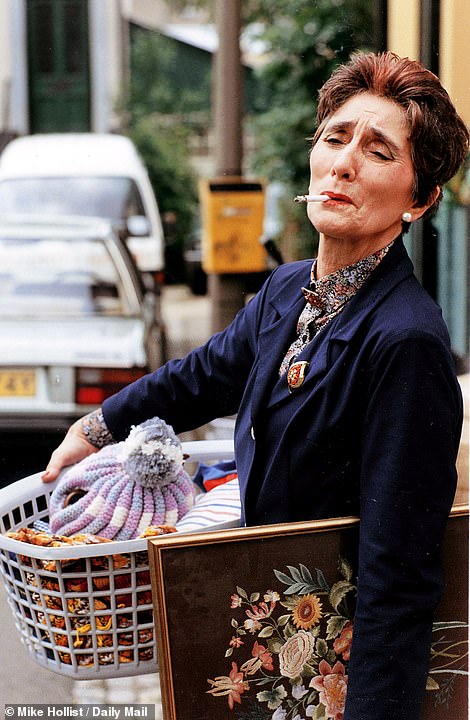 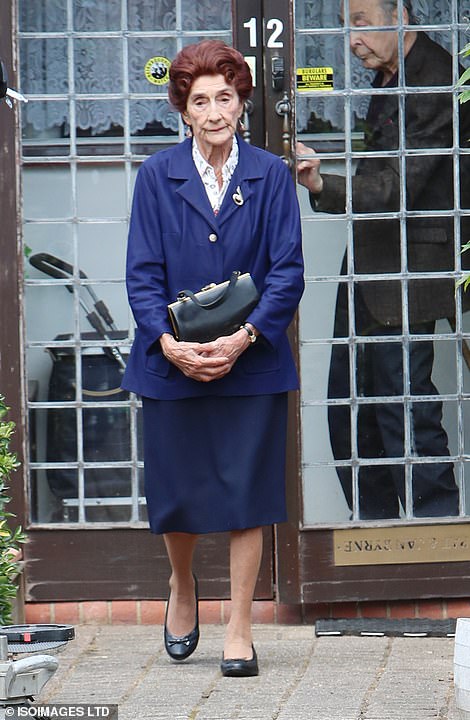 Legendary: June enjoyed 35 years on the show – filming her final scenes in 2020 (right)

A statement from her family said: ‘We are deeply saddened to announce our beloved mother, June, passed away very peacefully at her home in Surrey on Sunday evening, with her family by her side.

‘We would kindly ask that our privacy is respected at this very difficult time.’

Brown was perhaps EastEnders’ best-known star and larger-than-life Dot was known for her devout Christian faith and hypochondria, as well as her endless cigarette addiction.

The veteran actress, who had a long career in television and theatre, arrived on Albert Square shortly after the soap began in 1985, and aside from a break between 1993 and 1997, was a regular for more than three decades.

On January 31 2008 she single-handedly starred in an episode called Pretty Baby, in which she spoke to a cassette recorder about her life so that her husband could listen to it as he lay in hospital following a stroke.

Brown served in the Women’s Royal Naval Service at the end of the Second World War, and then left to train at London’s Old Vic Theatre School in Lambeth.

Before joining EastEnders she had roles in Coronation Street, Doctor Who, Minder and The Bill, as well as costume dramas The Duchess Of Duke Street and Oliver Twist.

After joining Albert Square she also starred in comedy Ain’t Misbehavin in 1997, and played Nanny Slagg in the BBC’s production of Gormenghast in 2000.

She announced the bombshell news of her exit from EastEnders in 2020 with little fanfare, revealing her decision on a podcast with a former co-star.

Dot had not featured in the soap for a month, when she left a voicemail for Sonia Fowler saying she had moved to Ireland.

At the time an EastEnders’ spokesman said the door remained open for a comeback, appearing to leave the decision in Brown’s hands.

Some of Dot’s biggest storylines explored controversial issues such as euthanasia, cancer and homophobia.

Brown won several awards for her portrayal of Dot, including a lifetime achievement honour at the 2005 British Soap Awards.

In 2009, she was nominated for the best actress prize at the TV Baftas for her standalone episode of the soap.

In December 2021 Brown was made an OBE in the New Year Honours, as she was recognised for services to drama and to charity.

She was previously made an MBE in the Queen’s Birthday Honours in 2008 for services to drama and charity.

Brown married her first husband, John Garley, in 1950. After his death she married actor Robert Arnold in 1958 and had six children with him.