The violent crime wave in New York City shows no signs of abating, according to the latest NYPD statistics, leading the city’s top cop to slam the ‘continuing and completely unacceptable violence in our streets.’

For the year through April 3, major crimes are up 44 percent from the same period in 2021, with felony assault up 19 percent and robberies rising 47 percent, the latest NYPD data show.

Although murders have ticked down 9 percent, other crimes are well up, with shooting incidents rising 14 percent, burglary up 31 percent, and grand larceny auto soaring 81 percent.

‘This is not what New Yorkers expect or deserve, and we will not stand for it,’ NYPD Police Commissioner Keechant L. Sewell said at a Wednesday press conference about the latest troubling data.

‘It’s clear what we are confronting: A perception among criminals that there are no consequences, even for serious crime. We need tangible changes,’ added Sewell. 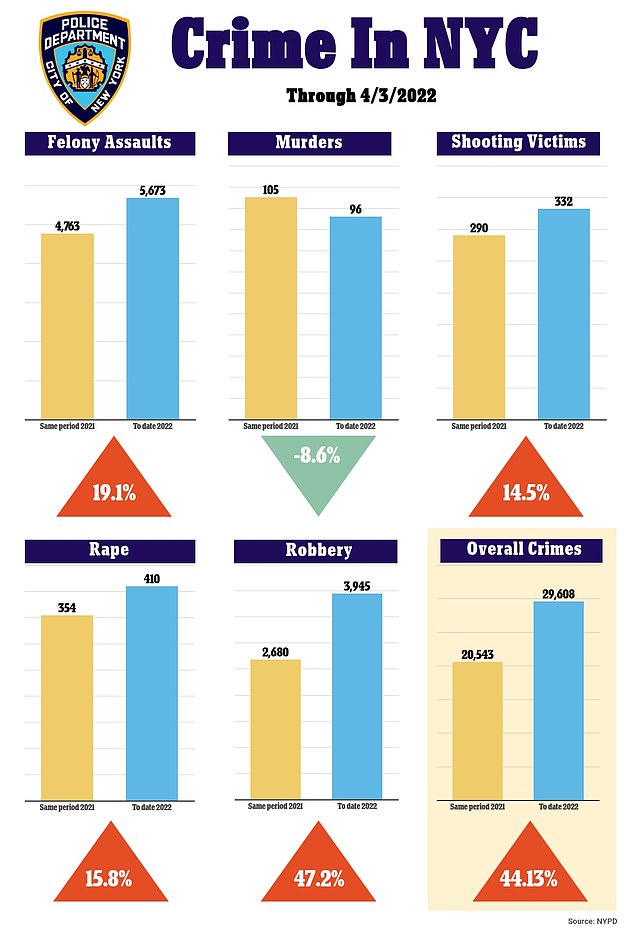 Without naming names or getting into specifics, Sewell appeared to slam the recent trend toward policies such as bail reform, and Manhattan DA Alvin Bragg’s stance reducing or dropping charges for many crimes.

‘[The justice system] must be fair, but it must first and foremost favor the people it was designed to safeguard and protect. When the focus on those people is lost — New Yorkers, who deserve to be free from fear — the policies fail to deliver on their most basic purpose, which is public safety,’ said Sewell.

‘Everyday New Yorkers need more help. Our police need more help. We need help from every corner of the criminal justice system, and from everyone who lives in, works in, or visits our great city,’ said Sewell.

In an emotional statement, Sewell recounted numerous recent shootings of children in the city, including the fatal shooting of 12-year-old Kade Lewin last week in Brooklyn.

Sewell insisted that ‘preventing and deterring crime remains our commitment’ and said that so far this year, there were 335 arrests linked to murders and shootings, up from 257 last year.

The commissioner said that the murder clearance rate stood at 89 percent for the year — higher than any year-end rate in the CompStat era. 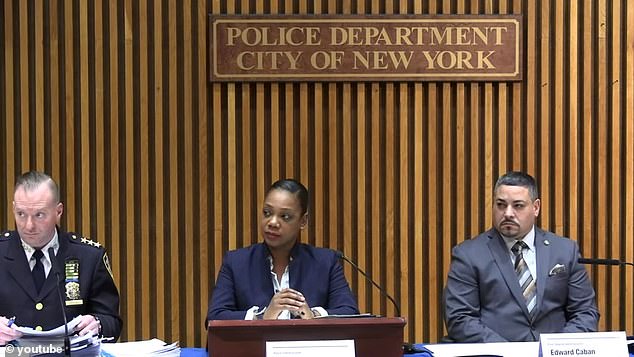 ‘This is not what New Yorkers expect or deserve, and we will not stand for it,’ NYPD Police Commissioner Keechant L. Sewell (center) said at a Wednesday press conference 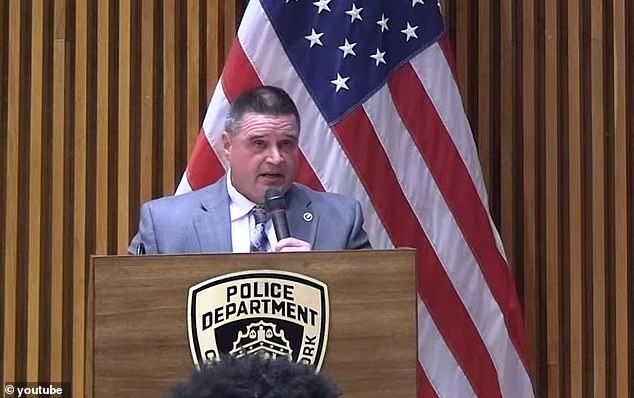 Meanwhile, in the latest shocking example of violent crime in New York, police are seeking an assailant who stabbed a 70-year-old woman in the back in Brooklyn on March 30.

The apparently random attack took place in broad daylight shortly after 1pm, when the unidentified man attack the woman on a sidewalk near Eighth Avenue and 53rd Street.

The woman was rushed to a hospital and is expected to survive.

In another shocking attack, a 60-year-old man in Harlem was bludgeoned with a brick Thursday afternoon after a dispute with a woman at his apartment building. The disturbing incident was captured on surveillance footage.

The elderly victim, who lives in an apartment complex on the corner of Adam Clayton Powell Jr Boulevard and West 132nd St., approached a woman in his building and accused her of stealing packages from the lobby around 3pm, according to the NYPD.

The woman, who remains unidentified, left and came back with two people. One of them started hitting the victim with a brick and his fists in the middle of the street until he crumpled to the ground, video released this week shows.

Emergency medical services responded to the scene and took the victim to Harlem Hospital with severe lacerations; he is in good condition.

The suspect, who remains on the loose as of Wednesday morning, fled south on foot on Seventh Avenue.

Crimes in nearly all categories, including felony assaults, shootings, rape and robbery, have risen in comparison to last year except the city’s murder rate.

Shootings are getting worse despite the state’s strict gun laws. Compared to the same period last year when 290 shootings were reported, this year’s numbers have gone up a staggering 14.5 percent – 332 shootings have been reported so far in 2022.

Last year, 354 rapes were reported over the same period as this year, 410.

Robberies are by far the most common crime in the city. An astonishing 47 percent increase has seen 3,945 robberies committed so far this year. In 2021, over the same time period, 2,680 had been committed.

Adams, a Democrat and former NYPD captain, was elected on a vow to crack down on crime and clean up the city.