Police in Ogun State Command have arrested a 24 year old man named Badmus Fokarin for allegedly using a hot knife to burn the buttocks of a 10 year old boy for licking from a tea which belongs to his (Folarin’s) mum.

Abimbola Oyeyemi, The Command’s Public Relations Officer disclosed this in a statement on Sunday.

Folarin who lives at the Elegushi Street, Owode-Yewa, Yewa South Local Government Area of Ogun State was arrested immediately after the police received a distress call from a concerned neighbour who heard the cry of the boy who was in pain.

“The suspect was arrested following a distress call received by the DPO Owode Egbado division, Olabisi Elebutte, from a concerned neighbour.

“He  reported through a telephone call that they could hear a sorrowful cry of a boy at No 12 Elegushi Street, Owode-Yewa, consequent upon which the DPO detailed the patrol team to the scene where the young boy was seen lying down helplessly with serious injuries all over his body. 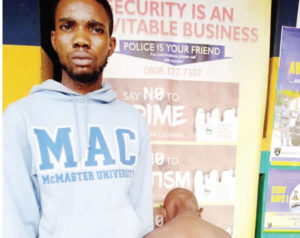 On enquiry, it was discovered that the suspect put a knife on fire and when the knife was red hot, he applied it to the buttocks of the boy, thereby inflicting second degree injuries on the innocent boy.

“During interrogation, the suspect alleged that the victim, who is living with the family, opened a tin of Milo tea belonging to the suspect’s mother and licked from it.”

The victim has since been taken to the hospital for medical evaluation immediately the incident happened.

In addition, the Commissioner of Police in the State, Kenneth Ebrimson has ordered the immediate transfer of the suspect (Folarin) to the Anti-Human Trafficking and Child Labour Department of the State Criminal Investigation and Intelligence Department for further investigation and possible prosecution according to the Police Public Relations Officer in the State.