MARKET REPORT: FTSE 100 ends 2021 with a whimper but still manages to clock up its best annual gain for five years

The FTSE 100 ended 2021 with a whimper but still managed to clock up its best annual gain for five years. 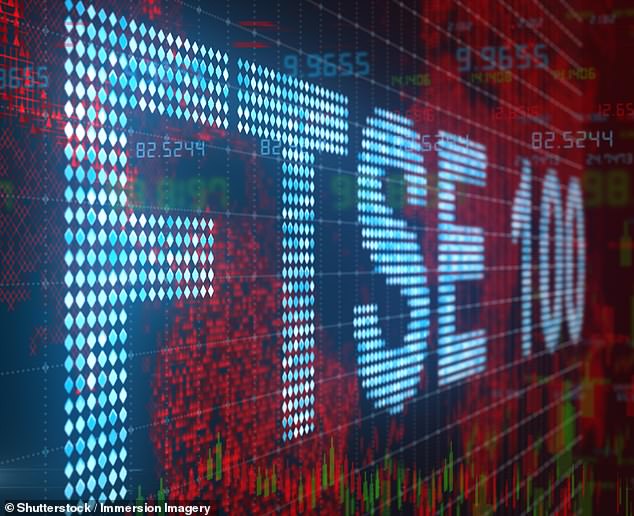 The dip yesterday came as fears over surging cases of Omicron despite reports that patients in hospital were suffering less severe symptoms than previously.

‘It is worrying that case numbers are high, but the low hospitalisation rates are determining the mood in the markets,’ said David Madden, analyst at Equiti Capital. He added: ‘The pandemic has taken many twists and turns in the past two years, but ultimately the fear comes from the possibility of restrictions being imposed and it doesn’t seem as if governments are close to taking action that could cause major disruption to economies.’

The London market was boosted in 2021 by the relaxation of lockdown restrictions which lifted company profits across some of the worst-hit sectors such as retail and hospitality.

Additionally, the City has benefited from a surge in company list ings, with 122 firms debuting on the London Stock Exchange last year raising £16.8bn, making it the top stock market in Europe.

However, it was hobbled as the year went on as both the UK and the global economy were hit by supply chain disruption, labour shortages, inflation and Omicron.

The FTSE 100 has also performed worse than some European counterparts, with Germany’s Dax index up 15.8 per cent last year while France’s Cac 40 has gained 29 per cent. In the US, the Dow set to close out the year with a rise of around 19 per cent while the Nasdaq is on track to be 22 per cent up.

Fresnillo gained 1.7 per cent, or 15p, to 892.8p while Polymetal International climbed 0.9 per cent, or 11p, to 1311.5p. However, the gold market itself had a bleak year, with prices of bullion falling nearly 4 per cent in 2021 as it lost out to cryptocurrencies such as bitcoin as traders hunted for assets to protect themselves against inflation.

Elsewhere, cinema chain Everyman Media announced chief financial officer Elizabeth Lake, has decided to step down as a director. Lake will remain throughout her six-month notice period while a successor is sought. The shares were little moved at 129p.

Estate agent Savills said the purchase of a 25 per cent stake in its investment management business by South Korean insurer Samsung Life had completed. The £63.8m deal, announced in May, will see Samsung Life invest at least £740m in the next four years. Shares fell 1.9 per cent, or 27p, to 1408p.

Meanwhile, small-cap digger Griffin Mining saw its wings clipped, falling 6.7 per cent, or 6.5p, to 90.5p as it warned of a ‘bleak’ first quarter in 2022 as its Caijiaying mine shuts for the Chinese New Year holiday and the Beijing Winter Olympics until March 14.