Thousands of offices around the world were brought to a grinding halt after the integral Microsoft Teams platform was hit by a global outage.

The office software, crucial for split working environments where some workers join the rest of their office teams while working from home, was down for many thousands of users on Thursday.

Outage tracking sites had the Microsoft platform marked as down for hours, leaving employees without their crucial online workspace.

Tools like MS Teams have connected users and workspaces as many companies continue to operate in a hybrid set up, reeling from the pandemic lockdowns of the previous few years.

Microsoft said the disruption was traced back to a broken connection to their internal storage service.

One employee from one of the nation’s biggest banks told Daily Mail Australia the entire office had cleared out when Microsoft Teams went down. 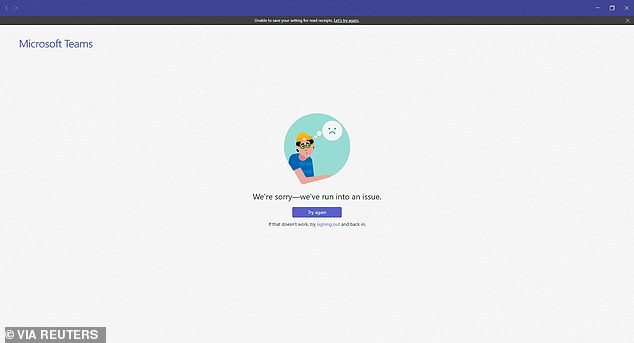 Microsoft appeared to sort the problem just before 3pm AEST however some users are still reporting issues.

The company was unclear on the number of users who experienced the disruption but said: ‘This issue may potentially affect any user attempting to utilise Microsoft Teams…We’re actively investigating other services to confirm the scope of impact’.

Left with nothing to do, some workers turned to Twitter to have a laugh at the implications of the service going down.

‘So Microsoft Teams just went down… I guess it’s time for me to clock out,’ one wrote.

MS Teams is used by many businesses and universities to facilitate internal communication and organise workflow.

In January Microsoft had said their Teams service had more than 270 million active monthly users.

Over 7,000 users reported issues with Microsoft Teams to Downdetector.com in the height of the platform’s problems.

Most recently, crash-detecting website downfor.io had MS Teams’ online service marked as up and running.

Services like Teams and Zoom have remained permanent fixtures in many organisations even as workers return to offices.