Only the hardest of hearts can resist being stirred by the sight of a sea of Union Flags fluttering across the stalls of the Royal Albert Hall as Elgar blasts from the orchestra pit at the Last Night Of The Proms.

The problem is getting a ticket for the finale. But other parts of Europe make it a little easier when it comes to allowing you to experience their classical and operatic highlights. Here are six tours where you can walk in the footsteps of some of the greatest composers in Europe. 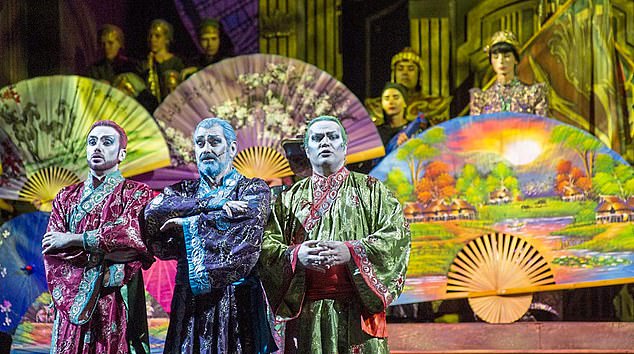 If you missed out on a ticket to the BBC Proms, you can still get your classical music fix on a tour that follows in the footsteps of Europe’s greatest composers. Guests on Kirker Holidays’ five-day tour of Tuscany will enjoy a performance at the Puccini Opera Festival (pictured)

Even if you have no interest at all in opera, you’ll be instantly transported back to Gazza’s tears and Italia ’90 when you hear Puccini’s opera Turandot, featuring the mighty Nessun Dorma, during the Puccini Opera Festival.

Puccini’s Tuscan birthplace of Lucca (just 20 minutes by train from Pisa) is a maze of Roman walls, bijou piazzas and chapels where you can visit the home of his birth in 1859 (puccinimuseum.org).

This five-night tour includes trips to Tuscan water gardens, dinners, and two performances of Puccini’s operas at the outdoor Teatro dei Quattromila in the nearby seaside town of Torre del Lago. Performances this year include Tosca, Madame Butterfly and, of course, Turandot.

ON TOUR WITH CHOPIN 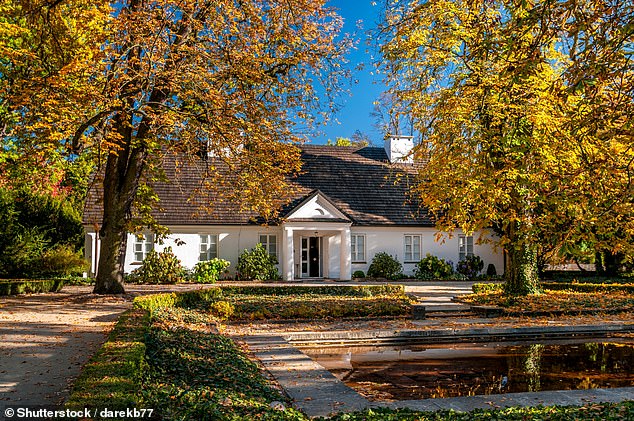 Criss-crossing Poland, this 12-day tour is just about as comprehensive a trip as you can get into the life and works of Frederic Chopin. This is a journey in the Romantic composer’s rather itchy feet.

There are few parts of Poland he didn’t perform in or visit and, as well as a piano concert in Warsaw’s Royal Castle, the tour takes in the manor house where Chopin was born, in the village of Zelazowa Wola, and the spa town of Duszniki Zdroj, where he went with his sister Emilia for treatments.

Finally, there’s the ancient town of Torun where you can sample the pianist’s all-time favourite food. As Chopin wrote in a letter home: ‘All of this [Torun’s attractions] does not surpass the gingerbread, oh that gingerbread, a piece of which I’ve sent to Warsaw.’

Book it: From £1,033 pp based on four people travelling. Accommodation, meals and flights not included (staypoland.com). Tours available on request. 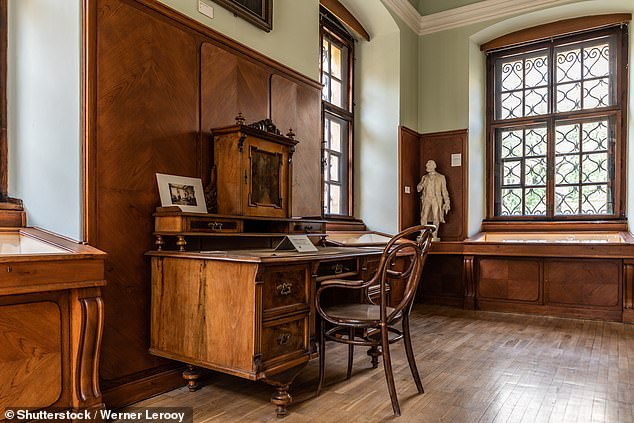 The Antonin Dvorak Museum in Prague contains Dvorak’s viola, his piano and a vast collection of his sheet music scores and letters. Pay a visit to the cultural centre on Ace Cultural Tours’ seven-day river cruise

It probably wouldn’t have pleased the humble and deeply religious Czech Romantic composer Antonin Dvorak that these days he is best known for the music that accompanied the Hovis advert, directed by Ridley Scott, which features Largo from his symphony From The New World played by a brass band.

But this seven-day river cruise might have raised his spirits — it includes an on board piano recital and a visit to the Prague Opera for a performance.

Sailing through the ancient region of Bohemia, the cruise docks in Melnik for some wine tastings in what is one of the most northerly wine regions in mainland Europe as well as taking in the Antonín Dvorák Museum (antonin-dvorak.cz), which contains his viola, his piano and a vast collection of his sheet music scores and letters. 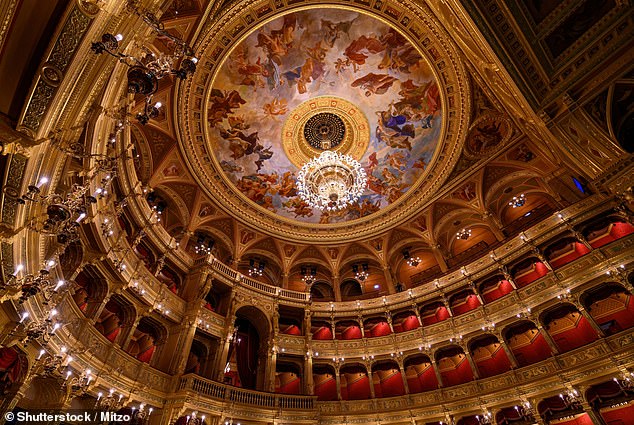 Grand: An eight-day Danube cruise with Saga begins in Budapest where you can watch an opera at the Hungarian State Opera House (pictured)

Veteran news reporter turned Classic FM presenter John Suchet is on board to give talks on this genteel eight-day navigation down the Danube, along with a classical trio of musicians giving daily performances.

The trip begins in Budapest, where you can watch an opera at the Hungarian State Opera House, before the Spirit Of The Danube vessel chugs down through central Europe. There are stop-offs in Bratislava, Vienna (where there’s a private concert in one of the Ringstrasse palaces) and finally to Linz, where you can visit the birthplace of Bruckner (now a museum) and listen to a concert within the immense baroque monastery of Florian’s Abbey. 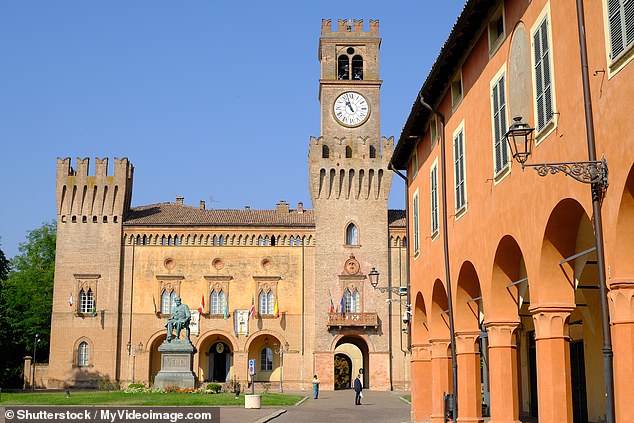 A view of the castle in the Italian village of Busseto, where Verdi studied music. The village features on Parma Food Tours’ travel itinerary, which revolves around food and opera

You only need a day for this food and opera double-header, which explores the cuisine and compositions of Giuseppe Verdi, a man who for all but eight of his 88 years lived in this small corner of Italy’s Emilia-Romagna region.

‘I have been, I am and always will be a villager from the Roncole’, he once wrote and this tour begins in the village itself (half an hour’s drive away from Parma) which, when Verdi was born in 1813, was actually part of the French Empire.

From here the tour heads to Busseto, where Verdi studied music, and a museum exploring his life and rise to becoming a prominent landowner as a way to protect his intensely private and reclusive personality. He would occasionally slip out of his home for a cup of Fortana wine, however, and you can visit the cafe Salsamenteria Storica e Verdiana Baratta where Verdi took a lunchtime tipple, before taking a tour of Teatro Verdi.

Verdi contributed money towards the construction of this tiny opera theatre which, although he had his own private box, he never set foot in despite living only two miles away.

Book it: From £280 pp based on two people taking a tour with private car and driver provided (foodvalleytravel.com). Tours on request. 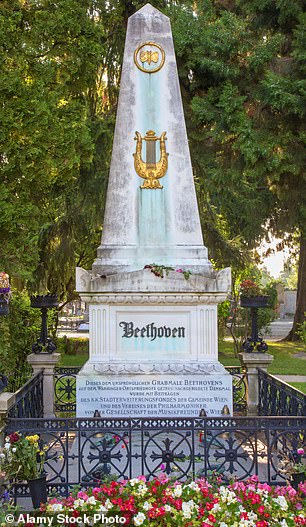 A nine-day Odyssey Traveller tour of Germany and Austria celebrates the life of Beethoven. Above is the composer’s tomb in Vienna

The Master may have only stayed in what would become the Cold War capital of West Germany until he was a teenager, but Beethoven House (beethoven.de) in Bonn, where Ludwig was born, is still a fascinating, creaking place to explore and spot his collection of bizarre-looking ear trumpets, used to battle his hearing loss.

From here, this nine-day tour takes in Cologne before crossing the border to Austria. Beethoven is buried at the Central Cemetery in Vienna and this is the city where he wrote his famed Heiligenstadt Testament letter, where he expressed despair over his advancing deafness.

The tour includes a concert at the Vienna State Opera and ends with a visit to the grand Pasqualati mansion block where Ludwig lived between 1804 and 1815.