A Missouri woman was tortured with a knife, had her dentures stolen and suffered a brain bleed after she went on a date with a recently-released convict she’d met on Facebook.

Preacious Brower, 30, said she suffered two days horrific physical abuse at the hands of James Larson, Jr., 29, after meeting him on May 14, just weeks after he’d been released from prison for a date at his father’s house.

‘He seemed pretty cool, ya know? I thought I found somebody, ya know, and it turned out to be a complete Jekyll and Hyde,’ she told Fox4.

Brower said the  date started when Larson Jr. picked her up in the city, and they drove out to his father’s lake house in Lake Arrowhead, a private community in Clinton County Missouri.

Everything seemed fine for the first couple of days, she said, until her love became violent and deranged. Larson had been in jail for multiple felonies, including drug possession, and it’s unclear if Brower knew of his criminal past.

‘He took a big bowie knife, and he kept hitting me with it,’ she said.

‘He cut my hair out, took my dentures away and my glasses, and he kept hitting me with random objects,’ she recalled.

According to the probable cause statement Brower said [Larson]  ‘punched her with closed fists, kicked her with steel-toe boots, and hit her in the head with what she described as an ice pick,  The Kansas City Star reported.

Documents revealed that Brower’s jeans were ‘wet with urine’ because Larson wouldn’t allow her to use the restroom.

She said, ‘he wouldn’t let her eat, either,’ and gave her a drink Friday morning that ‘tasted like medicine.’

Court records allege that by Sunday, Brower was still ‘having trouble breathing, hurts all over, and cannot walk, the news outlet reported.

As her attacker slept, Brower said she was able to escape to a neighbors house where she called police and told them she was being held hostage against her will. 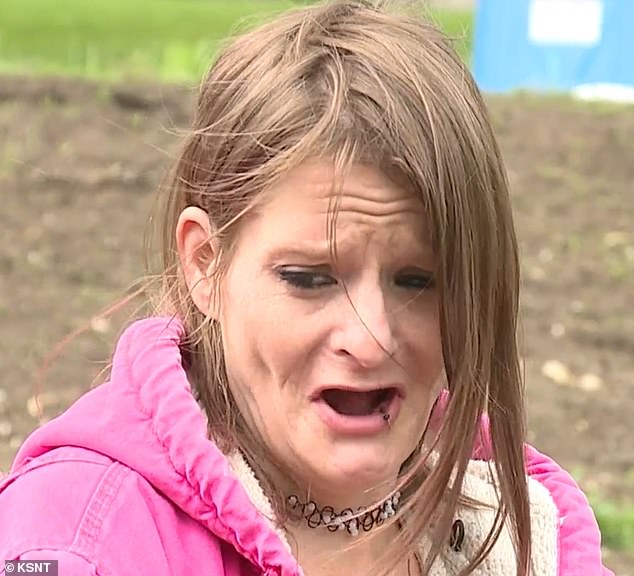 Preacious Brower said she had met James Larson, Jr., 29, an ex-con who had been recently released from prison, on the Facebook dating site. Everything seemed fine for the first couple of days, she said, until he became violent. She said she believed he was on drugs 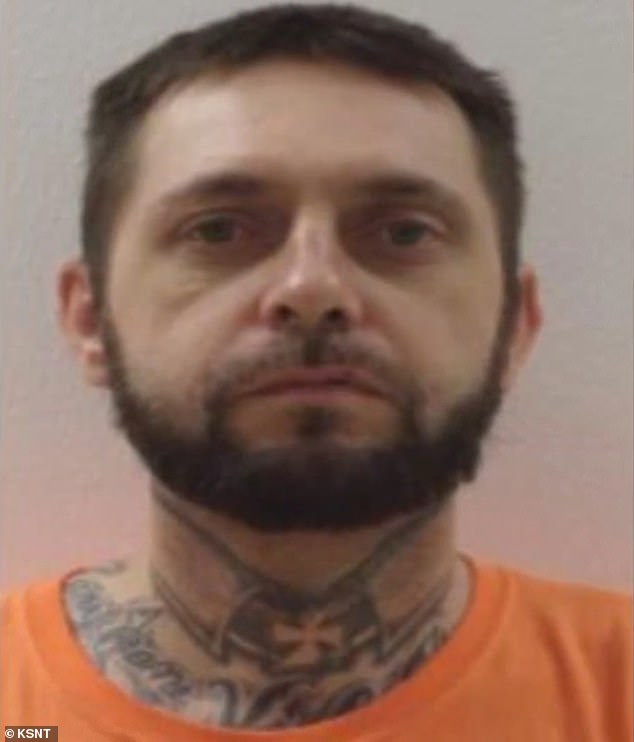 James Larson Jr., 29,  was charged with domestic assault, kidnapping, armed criminal action and unlawful possession of a firearm in Clinton County. He is currently being held on an unrelated no bond probation violation warrant

When deputies and troopers arrived to S.E. Apache Drive in Lake Arrowhead they learned of the victims terrifying ordeal that lasted over two days.

As officials attempted to get inside the home no one would respond.

Negotiations began with one resident outside and another held up inside who said they were armed and suicidal.

After a five hour standoff that involved the K9 deputy and SWAT team, the suspect was put in custody, after he was found hiding in a false wall.

Larson’s father, James Larson Sr., later revealed that his son had threated to kill him when he tried to intervene.

He told the authorities that his son re-entered his life after some time behind bars in Oklahoma.

He said he was hoping that after his son’s prison stint that he would have changed and been on a better path.

On May 14, after arriving home in the house he shared with his son, he found Brower in a ‘fetal position on on the floor,’ surrounded by broken glass and mirrors scattered across the floor.

Larson, Sr. said when he went to grab his shotgun that he had hidden, he said it was was no longer there. 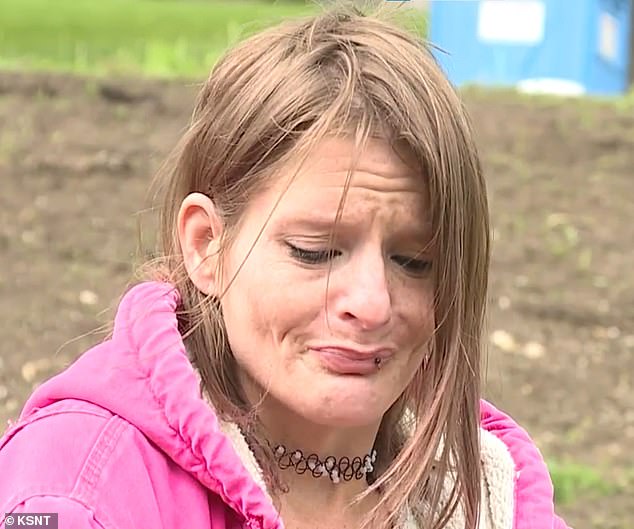 Brower has been left badly-shaken by her ordeal, and is now raising money for medical treatment 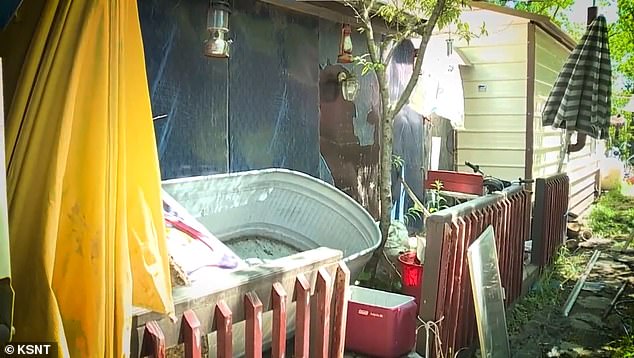 An exterior photo of the suspect’s father’s home located in Lake Arrowhead, Missouri

‘I didn’t know he knew where it was. Cocked it and that’s when I realized what he had in his hand,’ he said.

The suspects father said his son then went into the kitchen and threatened to shoot Brower and himself.

Larson Sr. said he did not want to call the authorities  because he feared for Broward’s life and instead waited while trying to figure out an escape plan for Brower.

In the meantime, the victim remained in the home getting tortured by Larsen Jr.

When her attacker fell asleep, Brower made a bold move and ran to the neighbors house where she called 911.

After the hours long standoff and Larson, Jr. was taken into custody, Broward was transported by emergency personnel to an area hospital where she was in critical condition.

Officials said she sustained multiple injuries, including a brain bleed from the attack.

On May 16, Larson Jr. was charged with domestic assault, kidnapping, armed criminal action and unlawful possession of a firearm in Clinton County.

He is currently being held on an unrelated no bond probation violation warrant.

Brower, is out of the hospital, but still recovering physically and emotionally from the horror she endured.  Said she is now ‘scared to meet anyone.’

In her pursuit in finding Mr. Right she admitted she made a poor decision and felt  shame.

‘I can’t even look at myself in the mirror or want to go out in public because I screwed up,’ she said, in part.

Nevertheless, she is relieved that her former date is back behind bars, and now encourages others who are looking for love to ‘meet them in a public place.’

She said, in part. ‘You don’t know who anybody is or what they’re capable of.’

To help Brower get a new set of dentures, new glasses and back on her feet a GoFundMe has been set up by a friend.

Brower wrote: ‘I am a domestic violence survivor and had lost everything and almost my life. I am asking help to get my birth certificate id glasses and dentures and clothes. I am currently unemployed and injured.’

She added: ‘Anything is a blessing.’ 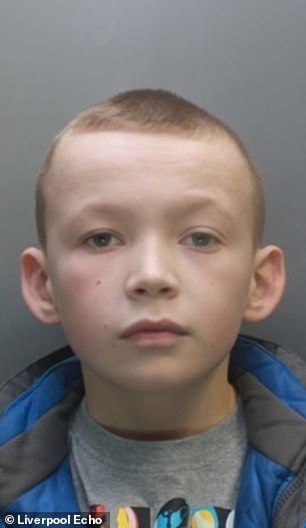 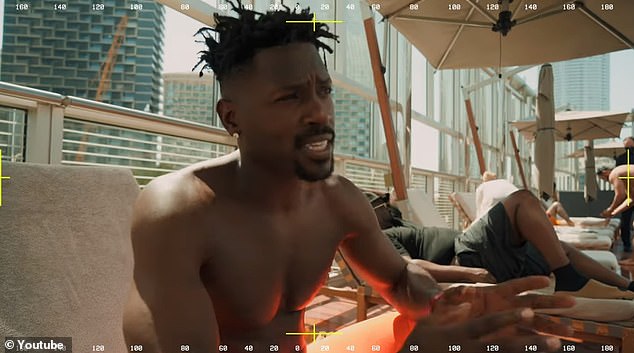