A woman was shot in the back with a ‘massive machine gun’ outside her own home in south London last night after a suspected ‘drive-by gone wrong’.

The 50-year-old woman, named locally as Sue, was described by a friend tonight as a mother-of-four with a ‘heart of gold’ who would ‘do anything for anyone’.

Emergency services arrived at the scene in Coston Walk, Brockley after reports of the shooting at 8.10pm yesterday evening, Friday July 15.

Her 75-year-old friend who has lives in the area said ‘Susan’ is being treated for ‘three gunshot wounds’.

She went on to say: ‘It is a bit scary at the moment. I have lived here for 40 years and when I moved here it was quite safe. Now it is dangerous.’

A neighbour said the victim was ‘caught in the crossfire’ but did not think the 50-year-old was the intended target because ‘nobody would shoot a sweet old lady’.

‘There’s always a lot of boys there, whoever did it saw someone outside their house and unfortunately she got shot,’ he said. 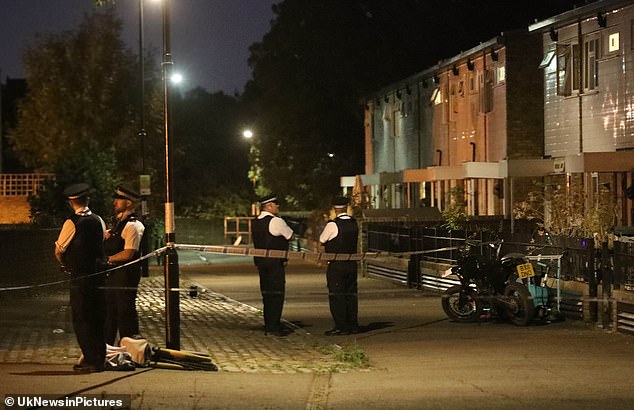 A woman in her fifties was shot in the back at just after 8pm last night, July 15, on Coston Walk in Brockley, South London 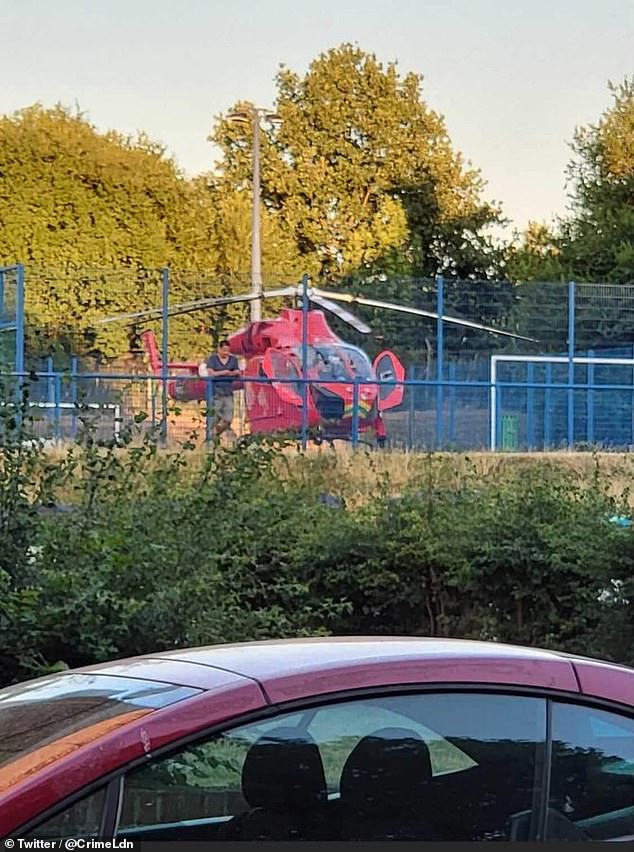 Susan’s friend who did not want to be named added: ‘She had three gunshot marks on her. She is a very, very friendly woman who will do absolutely anything for anybody.

‘She is called Susan and is 50. I have lived here for 40 years and started talking to her a few years ago.

‘She has a family. She is a mum of four. I see her children but don’t know how old they are. She has a partner. She has a heart of gold and is a good mum. She lives for her children. She is a full-time mum.’

Another neighbour, 33, said: ‘It is crazy. She is sweet. It was some kind of drive by gone wrong. Someone would not shoot Sue.

‘This isn’t right. She is 50, when you hear about this kind of thing you would think it would happen to a 17-year-old or something.

‘Violence around here is worrying but it is the government’s fault [as] there is no youth centre.

‘When I was growing up there was a youth centre and I would go. Now none of that exists, what do you expect people to do?” 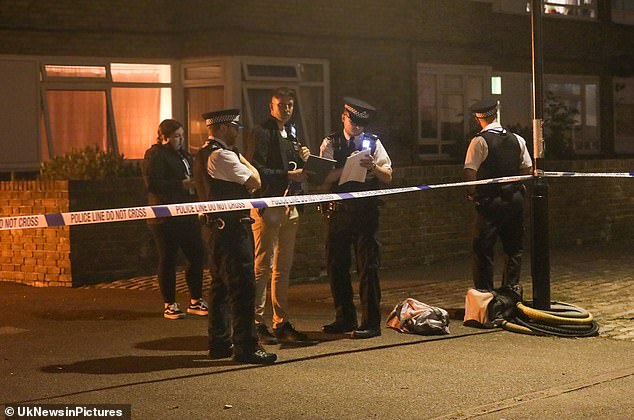 Neighbour Chinyere Akpoadafe, 46, said: ‘We are terribly scared, we have just been indoors since it happened.

‘I saw the police cars, ambulance and all that but I didn’t see the shooting.

‘This area is not safe. I heard the person that shot the woman was on a motorbike and that a few boys were driving the motorbike up and down.

‘They ride the bikes a lot in the area, you can’t sleep in the afternoon.’

One 70-year-old neighbour said: ‘I heard the helicopters overhead and thought oh my God, it sounds like there is a helicopter right over this house.’

‘I heard sirens and helicopters but I didn’t hear any gunshots. It is absolutely terrifying, disgusting and frightening.

Another neighbour, 49, said: ‘I came back from work just before 8pm and I normally pray with my kids. I rushed upstairs and started to pray.

‘During the prayer I heard an ambulances moving all over the area. I looked outside and there were so many ambulances I could not count.

‘I told my kids “something is happening” but I didn’t hear anything. Then my kids said they heard something like a gun shot but they thought it was something else.

‘It is horrible living here and having something like this happen. I have not heard such a thing before in my life.’ 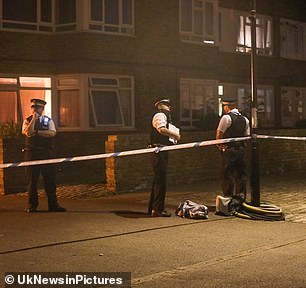 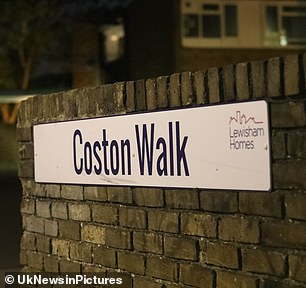 Met Police officers attended the scene on Coston Walk after reports of the shooting came in at around 8.10omn

Another witness claimed he saw two men on a motorbike drive onto the street with what looked like a ‘massive machine gun’.

They stopped at the house and shot ‘a lot of bullets’, he claimed, hitting the woman waiting outside.

He told MyLondon that the situation was ‘crazy’ and thought: ‘Wow that’s a big gun.’

Police confirmed the victim was sent to hospital after paramedics and an air ambulance were called the scene. She is not currently in a life threatening condition.

Around 20 houses were cordoned off this morning as police investigated the attack and no arrests have been made so far. 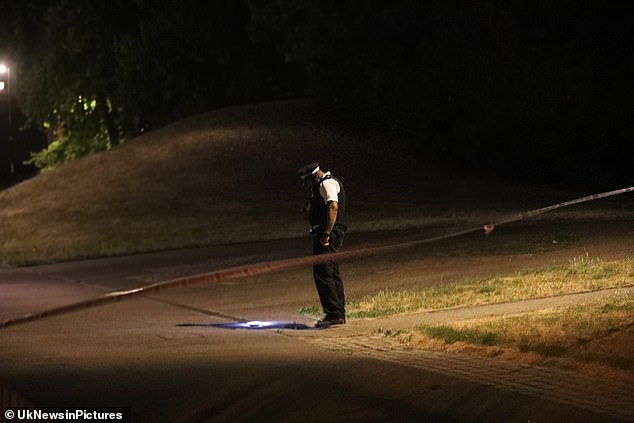 A spokesperson from the Metropolitan Police, confirmed today that officers were called to reports of the shooting last night.

They said: ‘Officers attended along with paramedics from London Ambulance Service (LAS). The air ambulance was also called to the scene.

‘A woman in her 50s was found with wounds to her back, believed to be caused by a firearm.

‘She was treated at the scene by paramedics before being taken to hospital. Her injuries have been assessed as not life threatening.

‘A crime scene is in place. There have been no arrests. Enquiries continue.’ 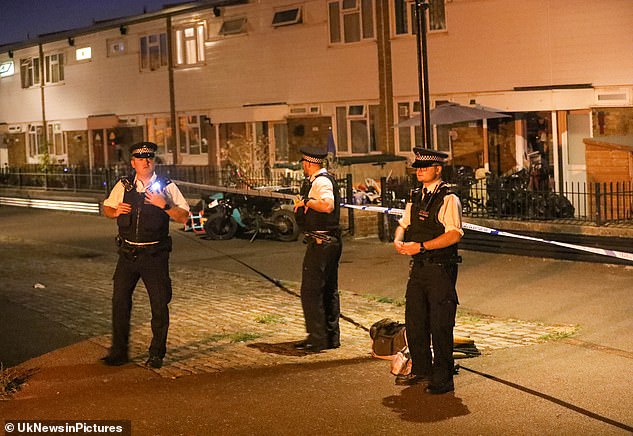 The London Ambulance Service confirmed they were called at 8.06 to reports of the shooting in Brockley.

They said they sent an ambulance and three fast response cars as well as London Air Ambulance.

‘We treated a woman at the scene and took her to a major trauma centre, by road, as a priority,’ a spokesperson said.