A mother whose body was found at a Lancashire beauty spot a week after she went missing died as a result ‘head injuries’, police have confirmed.

In a statement Lancashire Police confirmed today a body found in the Forest of Bowland on Friday night was that of Katie Kenyon.

The 33-year-old had not been seen since getting in a silver Ford Transit van in Burnley on Friday, April 22, which was then driven 17 miles into the Ribble Valley. 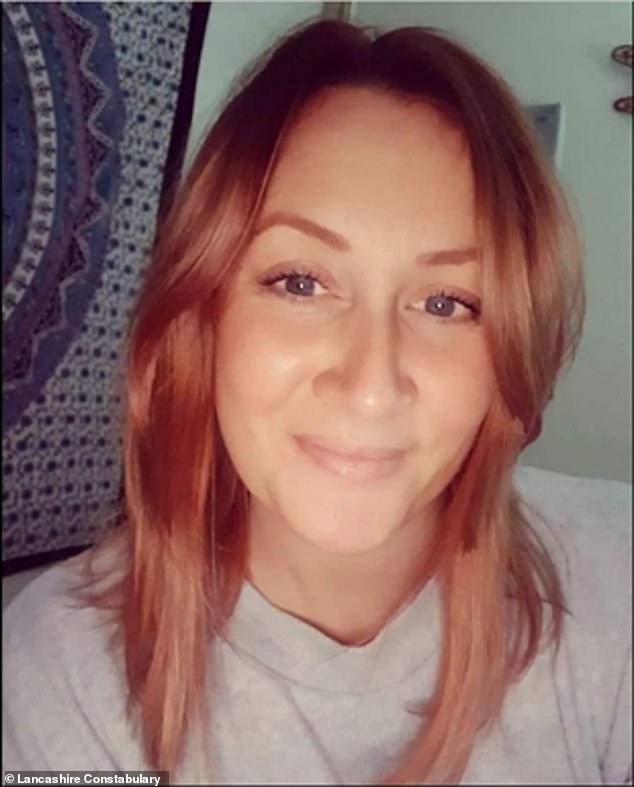 The body of Katie Kenyon was found by police in the Forest of Bowland on Friday night, Lancashire Police has confirmed 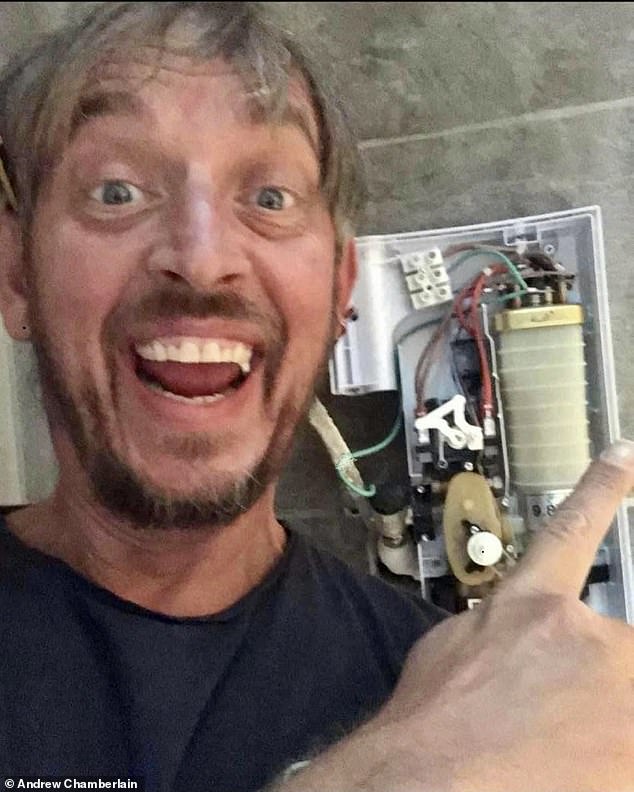 Andrew Burfield, 50, was charged with Ms Kenyon’s murder earlier this week while police were still searching for her 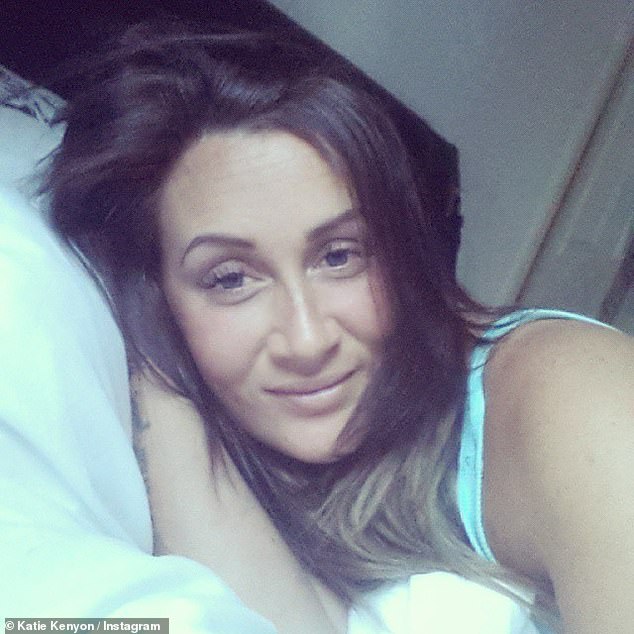 The mother-of-two went missing on Friday, April 22, with police describing her disappearance as extremely ‘out of character’

Her ex-boyfriend, Andrew Burfield, was charged with her murder last week while police carried out extensive searches for in the Forest of Bowland and Gisburn Forest.

Police announced yesterday that they found a body in the Forest of Bowland on Friday night, April 27, which they believed to be that of the mother-of-two.

Now the Lancashire Police has confirmed it is her and a post-mortem has determined she died from ‘head injuries’.

‘We can now sadly confirm that the body found in the Forest of Bowland is that of Katie Kenyon,’ it said.

‘Police found Katie on Friday following extensive searches and she has now been formally identified as the missing Padiham mum, 33.

‘Our thoughts remain with Katie’s family and loved ones at this difficult time. The family continues to be supported by specially trained officers.

‘A Home Office post-mortem examination was conducted yesterday and the cause of death was given as head injuries.

‘We would like to thank, once again, all those who helped during the search for Katie.

‘Andrew Burfield, 50, of Todmorden Road in Burnley has appeared in court charged with Katie’s murder and will be face trial in November.’ 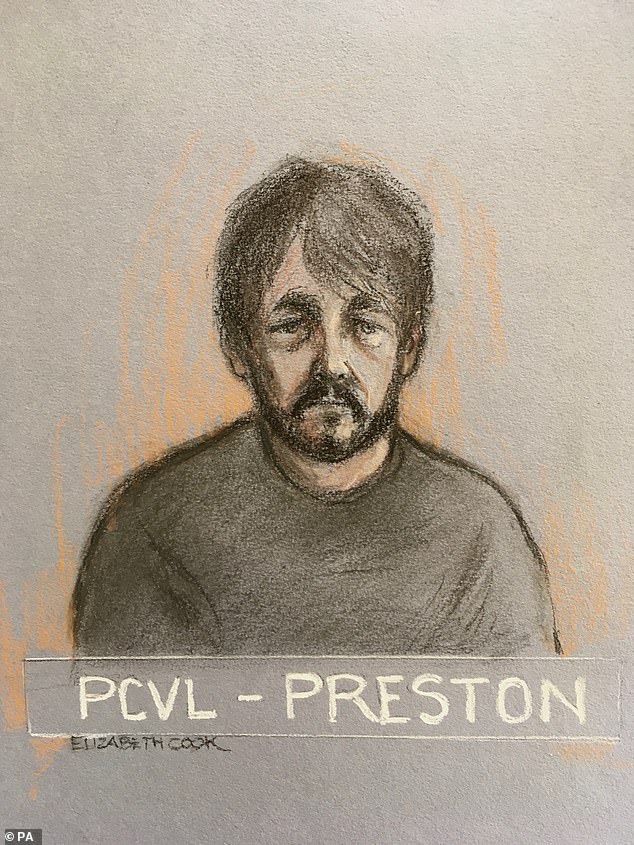 A court sketch of Andrew Burfield, who is set to be put on trial for Ms Kenyon’s murder in November

Burfield appeared in court on Friday charged with her murder.

The 50-year-old appeared at Preston Crown Court by videolink from HMP Preston, speaking only to confirm his identity.

He was remanded into custody ahead of a crown court trial in November.

Police spent a week desperately looking for the mother-of-one, with officers focusing their efforts on the Forest of Bowland and Gisburn Forest.

Police set up forensic tents in multiple areas in an effort to trace her after she disappeared last week.

Typically the structures can be used to protect forensic evidence, but may also be staked out to provide cover for equipment. 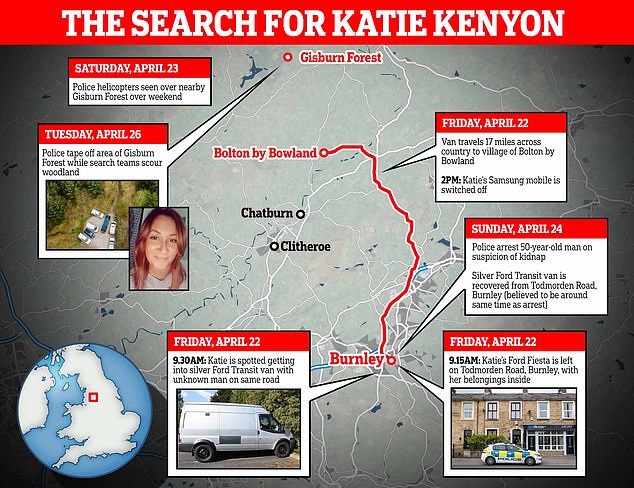 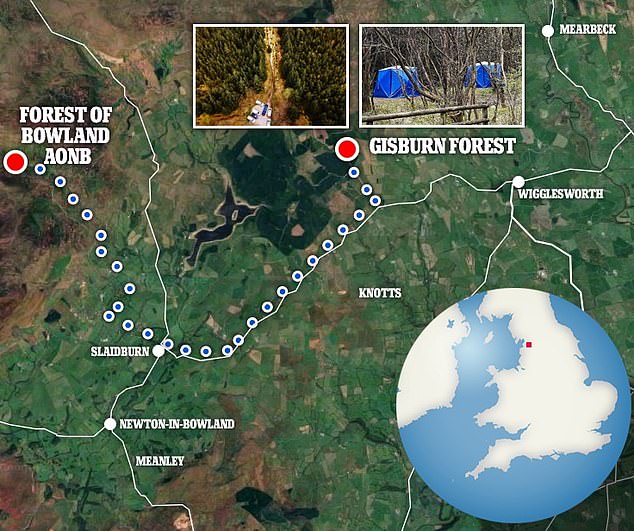 Scores of officers have been seen scouring the 3,000-acre Gisburn Forest, some 23 miles from Todmorden Road in Ms Kenyon’s hometown.

Ms Kenyon was seen getting into a silver Ford Transit van which left Burnley towards the Bolton-by-Bowland area at around 9.30am.

On Friday they were seen searching an area of Gisburn Forest, but later directed their attentions back to the Forest of Bowland after receiving information about her location. 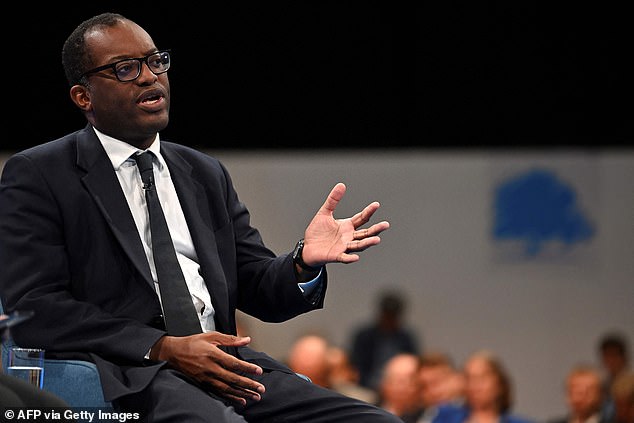 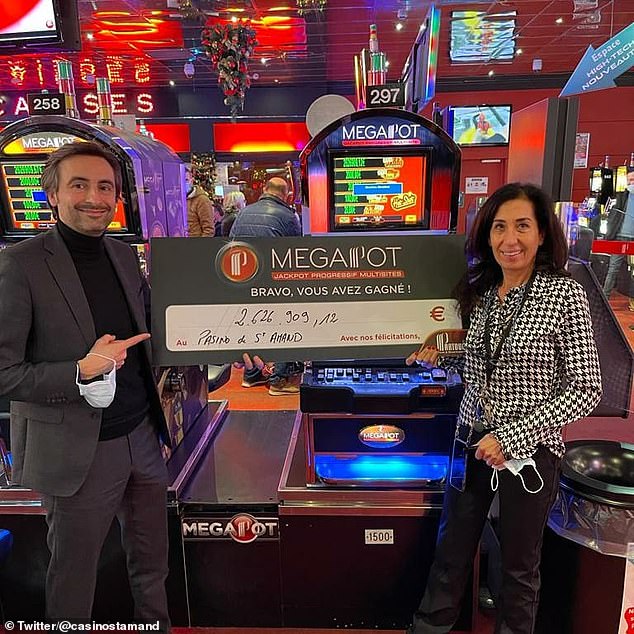 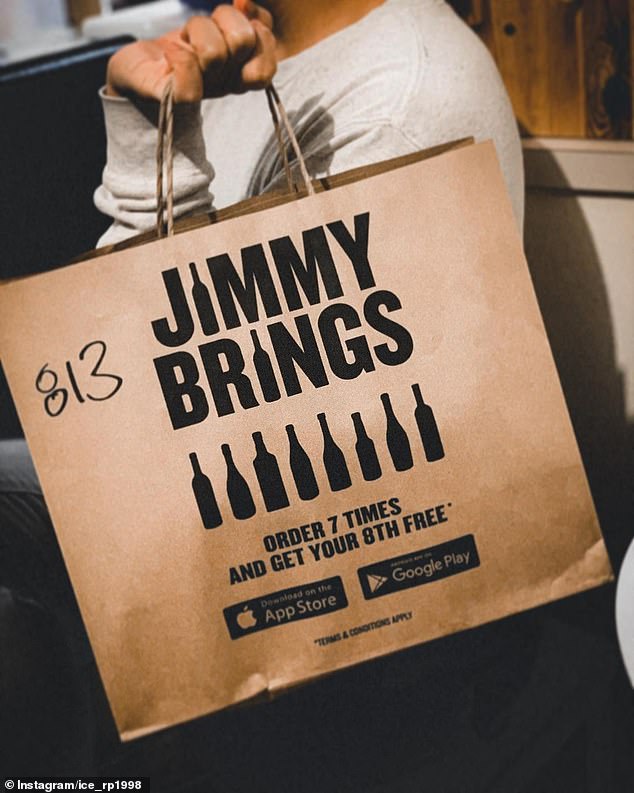 Advertisement An alcoholic who pleaded with home delivery booze service Jimmy Brings to stop serving her was repeatedly sent promotional messages and discount codes.   Advertisement The woman sent several messages asking to ‘opt out’ of the service and self-exclude from any future advertising. In one email seen by Daily Mail Australia, she detailed her issues… 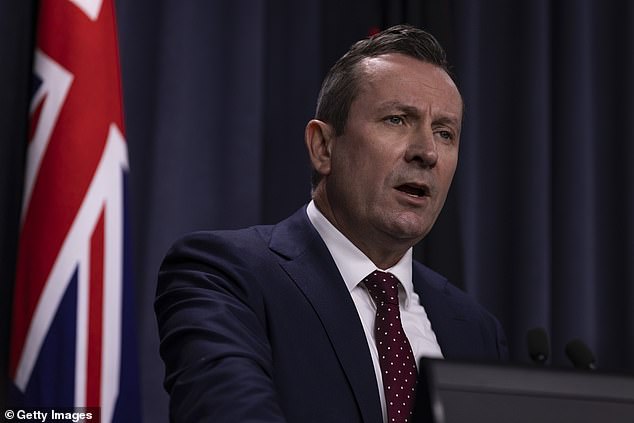 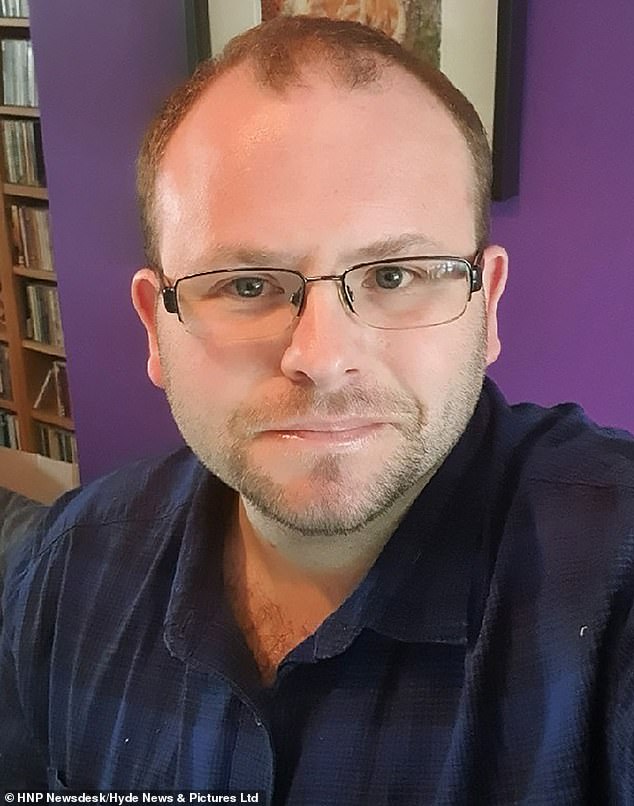 Advertisement Barrister studying to become church minister died from overdose after downing crystal meth because he feared police were about to arrest him, inquest hears Martin McGann enrolled at Ripon Theology College in Cuddesdon, Oxfordshire  Former barrister had previously practised in family law at a chambers in London The 37-year-old was hiding a secret drug habit… 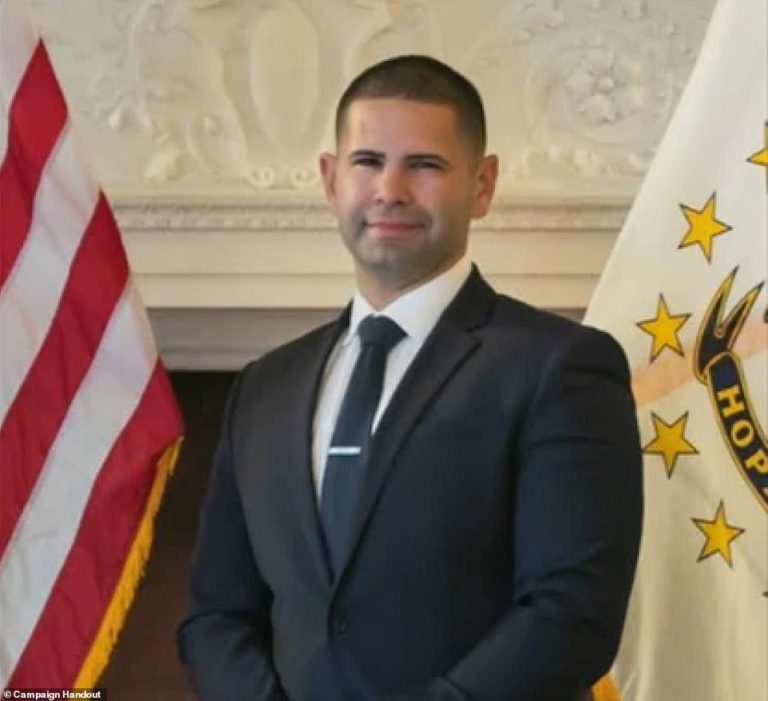 Advertisement A Rhode Island cop was suspended his state senate campaign and was later arrested after a video emerged apparently showing him punching his Democratic female rival, during a Roe v. Wade protest.  Advertisement Hundreds of protesters assembled outside the Rhode Island Statehouse in Providence Friday in wake of the Supreme Court’s decision to overturn…