Myleene Klass showed off her svelte figure in a strapless jumpsuit as she arrived for a presenting stint at Smooth Radio on Wednesday.

The broadcaster, 44, stunned in the floral print black-and-white ensemble which flaunted her toned arms.

The mother-of-three teamed the bandeau jumpsuit, which is available in the star’s Next collection for £39, with stylish dusky pink slider shoes. 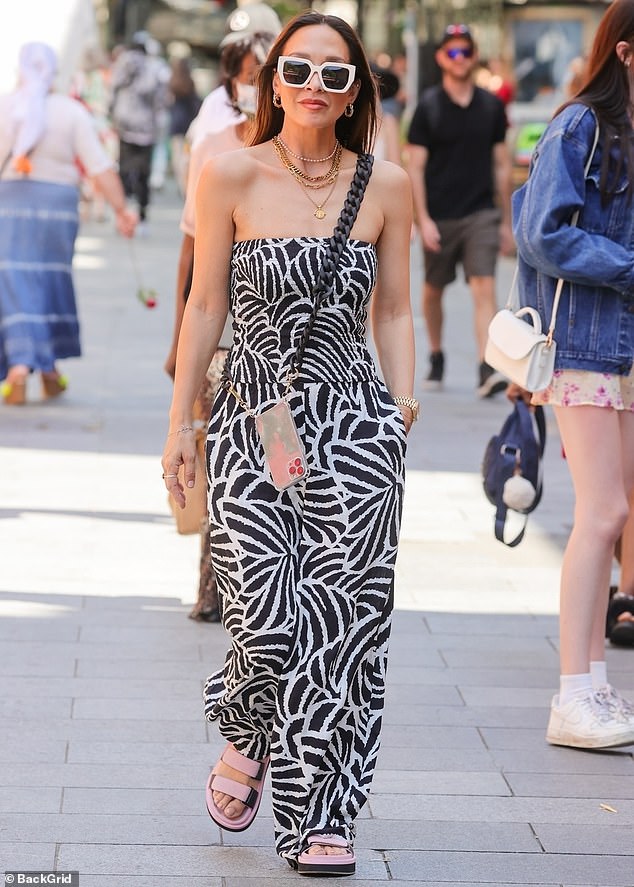 Stunning: Myleene Klass showed off her svelte figure in a strapless jumpsuit as she arrived for a presenting stint at Smooth Radio on Wednesday

Myleene accessorised her look with layered golden necklaces, some rings, and a chic pair of retro-framed shades.

The former pop star grinned as she strolled around, carrying her phone in a cross-body satchel.

She wore her silky chestnut tresses down, opting for an easy glam make-up look with a berry red lipstick.

It comes as Myleene took the dress code for ‘boardroom swimwear meeting’ quite literally when she attended a conference for her line with Next last week. 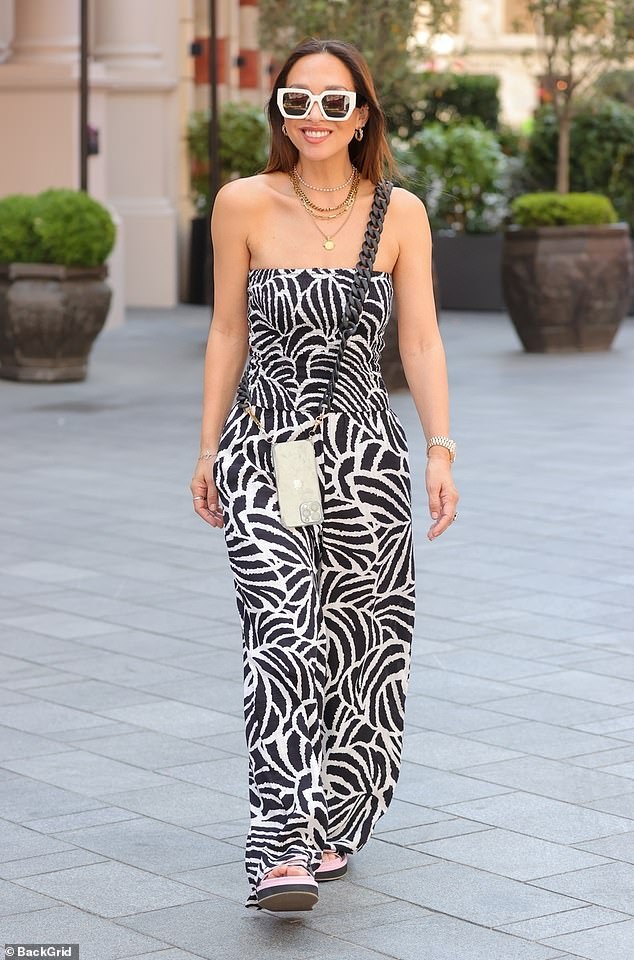 Summer chic: The broadcaster, 44, stunned in the floral print black-and-white ensemble which flaunted her toned arms

The singer exhibited her enviable figure in a self-designed leopard print bikini – which retails for £28 – in a sizzling snap shared to Instagram.

Sipping from a bottle of water, she styled the look with a collection of dazzling gold necklaces while kicking her sandal-clad feet up on a glass table.

Myleene previously reflected on the success of her famed white bikini and shower scenes on the ITV reality show I’m A Celebrity… Get Me Out Of Here!. 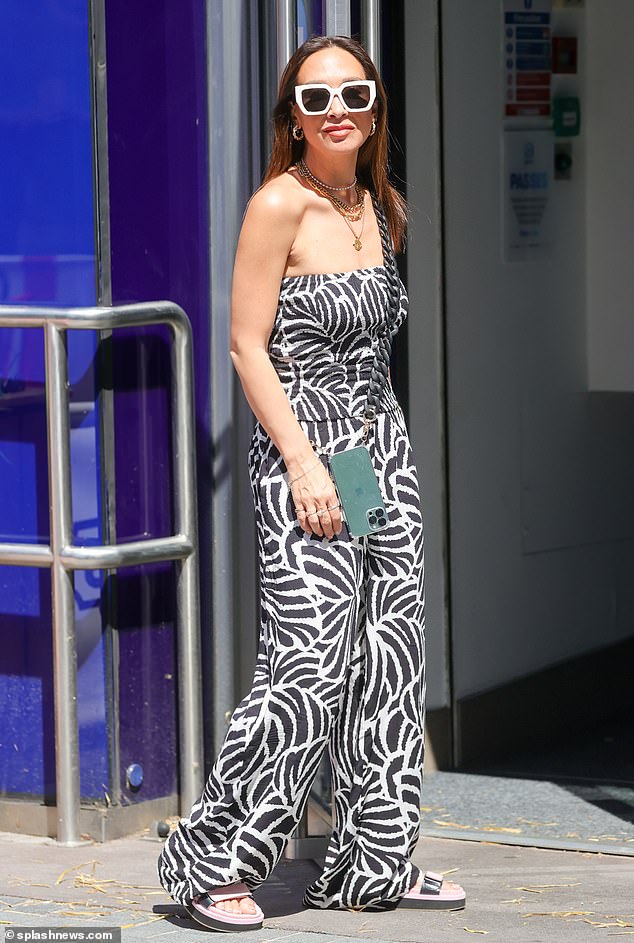 Gorgeous: Myleene teamed the bandeau jumpsuit – which is available in the star’s Next collection – with stylish dusky pink slider shoes

She appeared on the popular series in 2006 where she joined a host of names in the jungle including Jason Donovan and Dean Gaffney.

Taking to Instagram after the 2020 series launched, Myleene reflected on her time on the show and her iconic white bikini.

Myleene admitted in the caption that she purchased the bikini en route to the jungle after producers told her that her other swimwear packed would strobe on camera.

She penned: ‘I can’t believe that @imacelebrity started again tonight. It feels like I was in the jungle only yesterday! Every time I see this pic pop up, I can’t believe how fate handled it all. 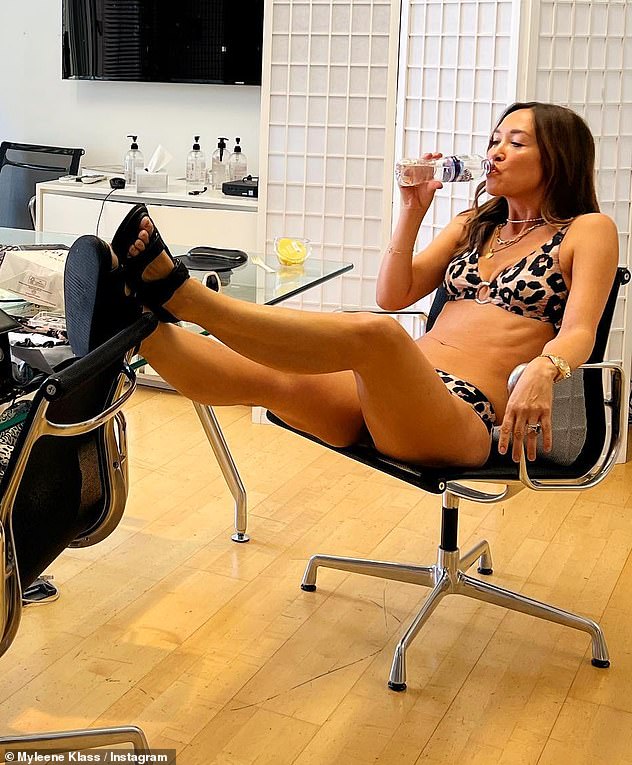 Hot stuff: Last week, Myleene exhibited her figure in self-designed leopard print bikini at a boardroom meeting for her Next swimwear line, in an Instagram post

‘I remember one of the shows producers looking at my bikinis in the hotel before I went to camp. One was covered in stripes. ”We’ll have to stop at the shops as that’s probably going to strobe on camera”.

‘I ran into the shop en route to the jungle, asked the shop assistant for the plainest bikini she had.

‘Best $40 I ever spent….especially as it raised so much for charity afterwards. Goodluck to the contestants. Hope the new outdoor shower isn’t too cold!!!’

Myleene ultimately finished on second place, behind Matt Willis, and following her stint on the show, she put her white bikini on auction, raising £7,500 for charity. 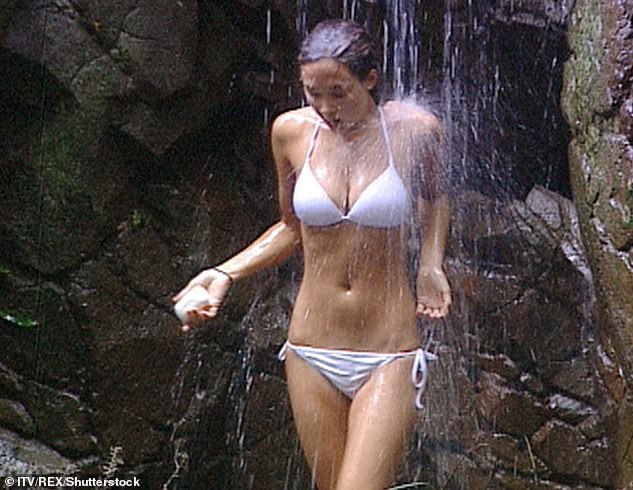 Throwback: Myleene proved she’s still got her enviable bikini body, 15 years after wowing I’m A Celebrity… Get Me Out Of Here viewers with her sizzling shower scenes (pictured in 2006) 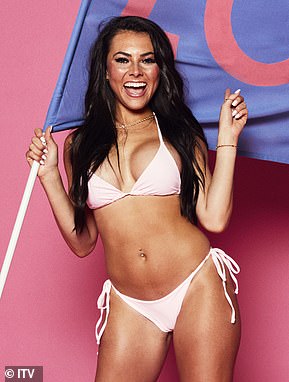 Advertisement Paige  Thorne Name: Paige Thorne Age: 24 Advertisement Location: Swansea Occupation: Paramedic Who is their type on paper? ‘In Swansea there is just no-one I can find.  ‘I haven’t got to swipe. So, hopefully they can just come to me now! Advertisement ‘I came out of a relationship and I was just so done with guys. Then I… 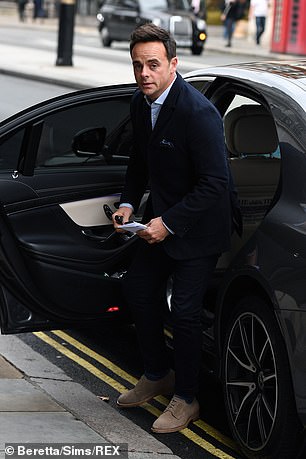 Advertisement Ant McPartlin and Declan Donnelly were joined by their glamorous wives Anne-Marie Corbett and Ali Astall at an addiction awareness event in London on Tuesday. The Geordie duo, both 46, attended the engagement at the BAFTA headquarters in Piccadilly with supportive partners Anne-Marie, 43, and Ali, also 43.  The event, hosted by drug and alcohol dependence charity… 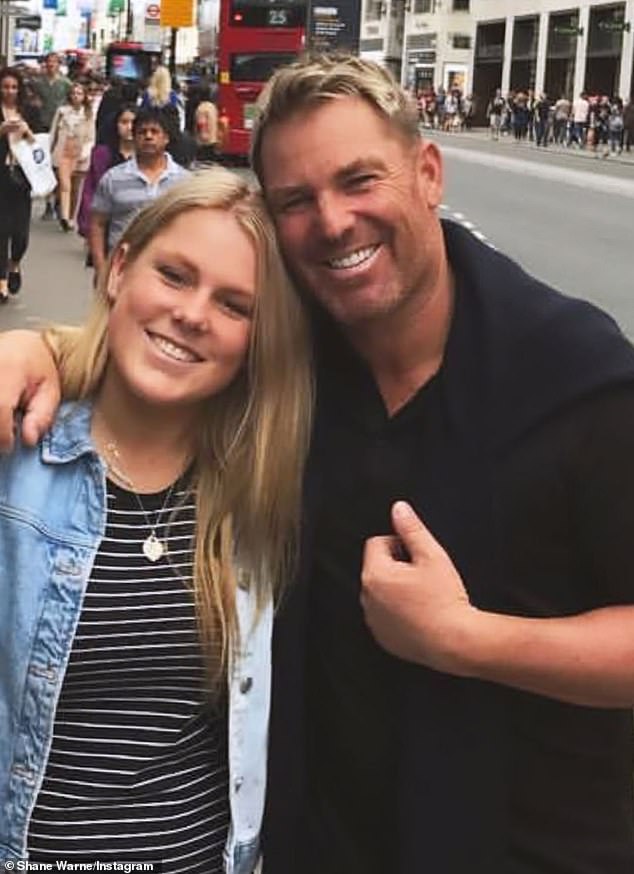 Advertisement Brooke Warne has encouraged fans to attend the state funeral for her father, Shane Warne, who died earlier this month.  In a post on Instagram Stories on Tuesday, the 24-year-old shared an advertisement alongside a moving caption.  ‘Tomorrow is the night we celebrate our dad’s life. Be sure to secure your ticket. We hope… 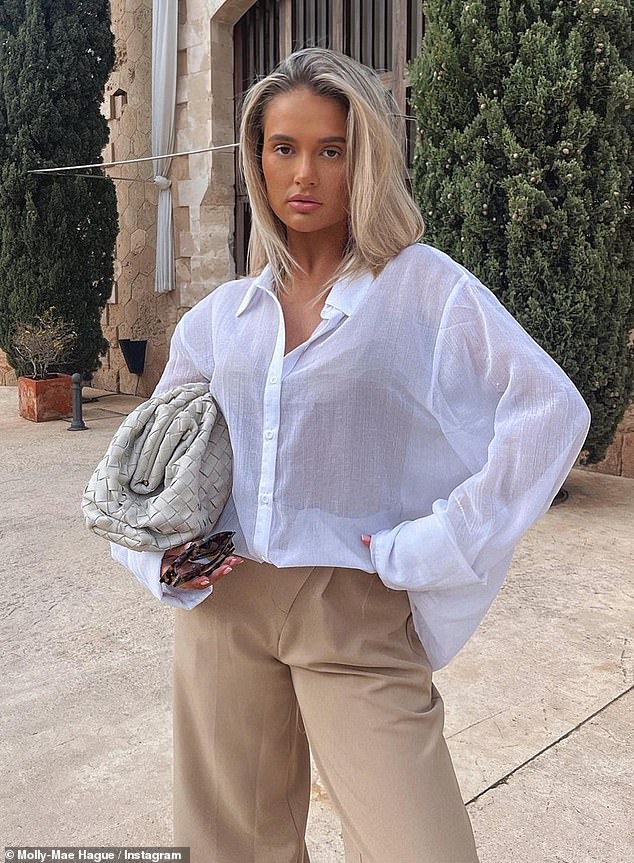 Advertisement Molly-Mae Hague has heaped praise on Deborah James after the writer raised £5.8million for charity and was given a Damehood amid her bowel cancer battle. The Love Island star, 22, gushed that the BBC podcaster, 40, was ‘incredible’ and an ‘amazing woman’ as she lauded her impressive fundraising efforts. Molly-Mae took to her Instagram… 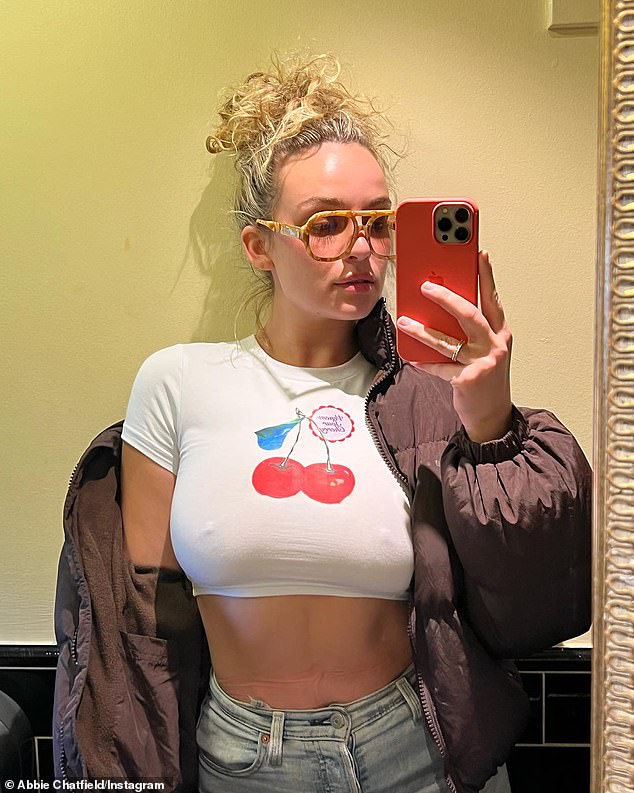 Advertisement Abbie Chatfield has explained her recent absence from social media, admitting she is feeling overwhelmed and burnt out after a stressful few weeks. The Hit Network radio host, 26, fought back tears in a series of Instagram Stories on Tuesday as she told her 395,000 followers she needed a break. Abbie, who balances her national radio show with… 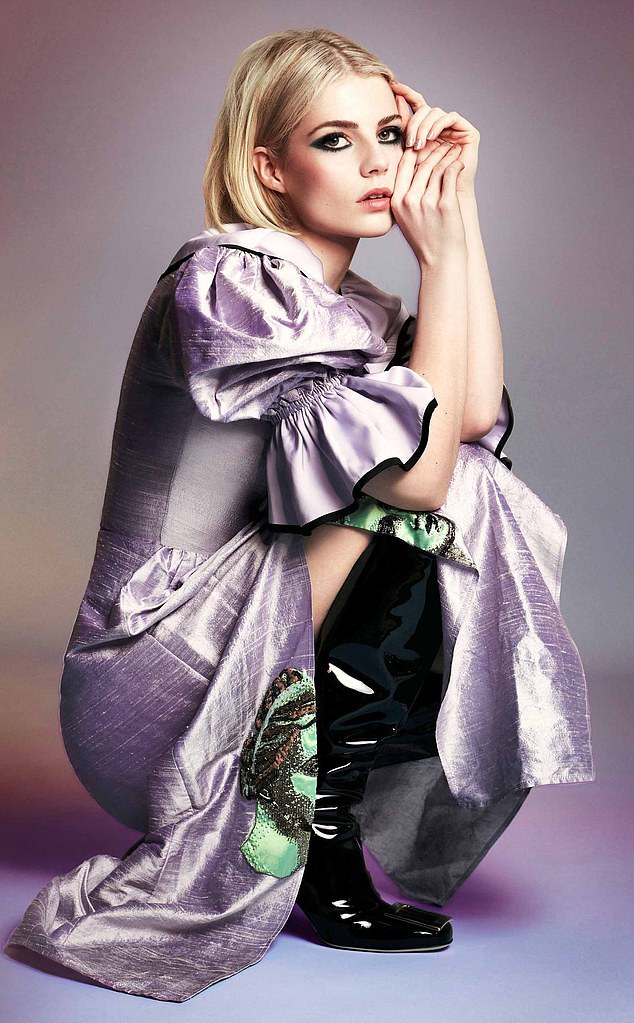 Advertisement Bohemian Rhapsody star Lucy Boynton: How I felt when Rami Malek told the world he loved me during his Oscars acceptance speech By Padraic Flanagan For The Mail On Sunday Published: 19:49 EST, 5 March 2022 | Updated: 21:16 EST, 5 March 2022 Advertisement She has been acting since she was 12, won worldwide…