Four people alleged to have ties to Middle Eastern organised crime groups have been accused of stealing $2million from the National Disability Insurance Scheme.

Officers from the Australian Federal Police raided several properties in Sydney’s west and arrested three of the alleged fraudsters on Wednesday morning.

Wafaa Al Shamari, 32, at Liverpool, Muna El Shreffy, 37, at Bonnyrigg and Adel Al-Shamare, 27, at Wentworthville, have been accused of fraudulently claiming money from NDIS participants for services that were never delivered.

A fourth person, Kareem Al Shamare, 62, was charged on Wednesday night as he re-entered Sydney. All four people are understood to be related. 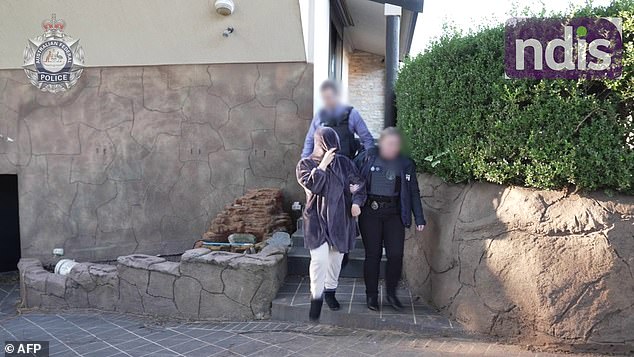 In dramatic footage of the raids a sniffer dog is seen entering a home while detectives sift through documents on a dining table.

A sealed bag containing stacks of $50 and $100 bills were among the evidence.

One of the alleged fraudsters wearing a purple dressing gown was later seen covering her face as exited a home in Sydney’s west with police.

The taskforce, which is a partnership between the National Disability Insurance Agency (NDIA), the AFP and Services Australia allege the group were posing as disability support providers to receive the payments.

None of these companies currently work with the NDIS, police said. 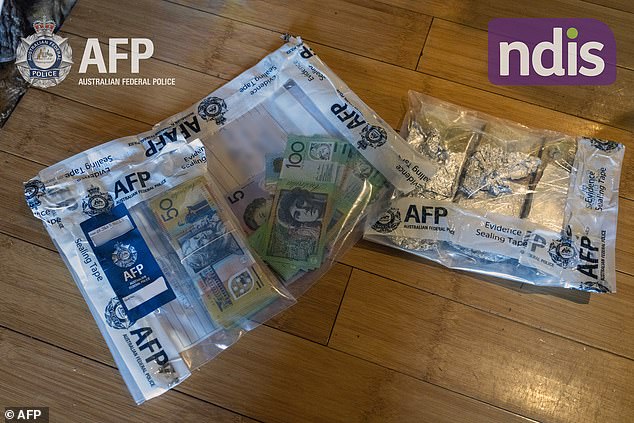 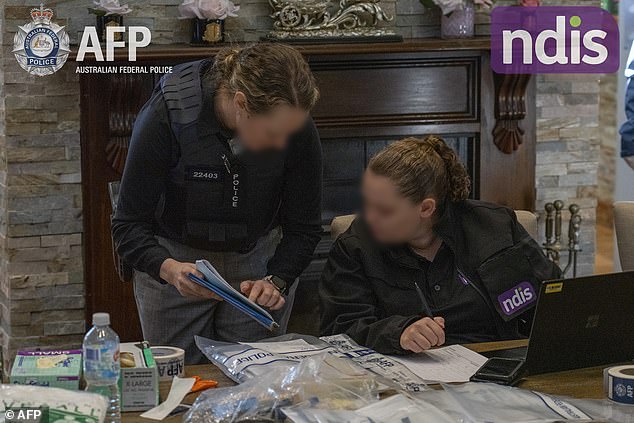 It is also alleged members threatened violence towards NDIS participants and witnesses.

Participants impacted by the fraud have had money reinstated to their support plans, the NDIA said in a statement.

The multi-agency partnership, which was established in 2018, has a focus on high risk and serious criminal activity targeting the NDIS.

The Commonwealth scheme supports more than 500,000 Australians living with a permanent or significant disability.

Prime Minister Anthony Albanese has promised an overhaul of the NDIS to boost efficiency and crackdown on those manipulating public funds.

The Labor government plans to appoint a senior officer within the NDIS to focus on barriers to services in regional Australia and ‘commit to co-designing changes’. 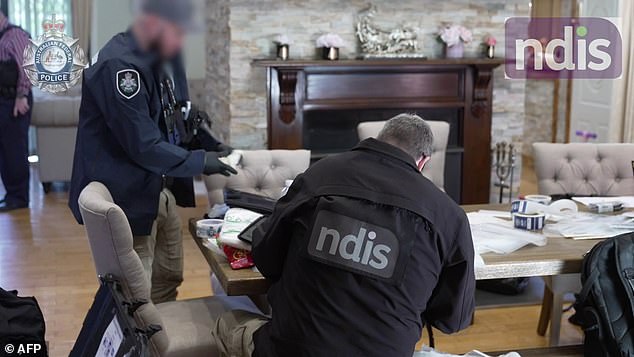 The NDIA is a multi-agency partnership which was established in 2018, with a focus on high risk and serious criminal activity targeting the NDIS (pictured, officers at a home in Sydney’s west)

AFP Assistant Commissioner Nigel Ryan said the force was passionate about working closely with partners to stop attacks on Australians living with a disability.

‘Members of our community have allegedly been targeted, exploited and threatened by groups looking to fill their own pockets and steal public funds that have been set aside for Australians who need that support,’ Assistant Commissioner Ryan said.

‘The AFP will not stop in its pursuit of these groups who chop and change companies in a pointless effort to hide their criminal behaviour from law enforcement; our level of intelligence sharing with partners is something criminal groups should be extremely apprehensive of.’

Wafaa Al Shamari was charged with dishonestly intending to obtain a gain and one count of conspiring to defraud the Commonwealth. 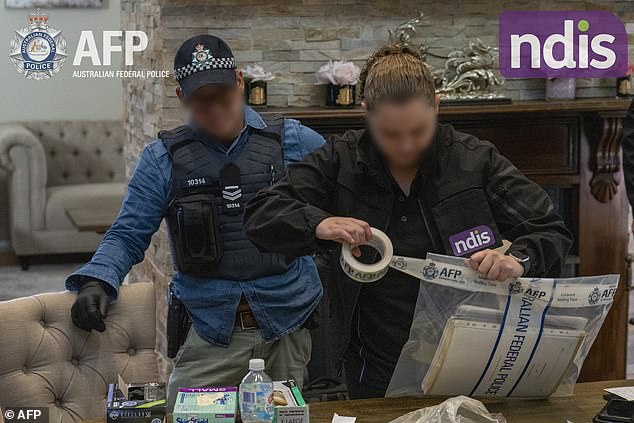 Participants impacted by the fraud have had money reinstated to their support plans, the NDIA said in a statement (pictured, detectives seal bags containing documents on Wednesday)

El Shreffy and Adel Al-Shamare were each charged with one count of conspiring to dishonestly obtain a gain.

In April, a separate NDIA investigation saw officers from the AFP arrest a woman at Sydney Airport as she re-entered the country. She will face court in July after being charged with defrauding the NDIS of more than $1 million.

Four other individuals unrelated to the woman will also face court in coming weeks following a NDIA investigation in Queensland.

The group were each charged with general dishonesty, an offence which carries a maximum penalty of 10 years behind bars.