Neighborhoods with more dogs are found to have lower rates of homicide, robbery and aggravated assaults, according to a new study.

The study, conducted by researchers at The Ohio State University, suggests criminals see people walking their dogs as ‘more eyes’ patrolling the streets and deters them from breaking the law.

However, crime dramatically dropped in places with more dogs and residents who have high levels of trust in each other.

Nicolo Pinchak, lead author of the study and a doctoral student in sociology at The Ohio State University, said in a statement: ‘When people are out walking their dogs, they have conversations, they pet each other’s dogs.

‘Sometimes they know the dog’s name and not even the owners.

‘They learn what’s going on and can spot potential problems.’ 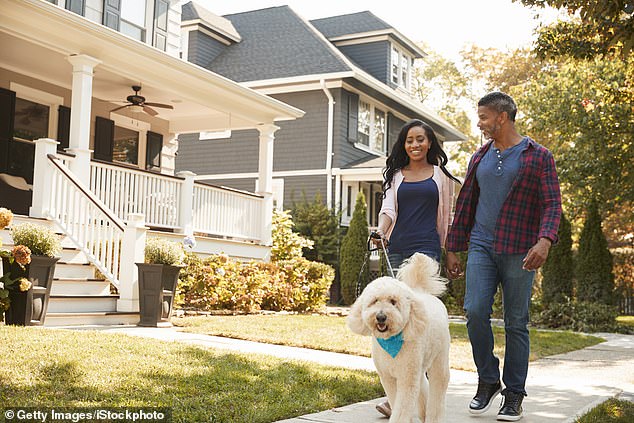 Neighborhoods with more dogs are found to have lower rates of homicide, robbery and aggravated assaults, according to a new study

To uncover these findings, researchers analyzed crime statistics from 2014 to 2016 for 595 census block groups in Ohio’s Columbus area, which is located in the center of the state.

Data from a marketing firm that asked residents in 2013 if they had a dog was also used, along with data from the Adolescent Health and Development in Context study to measure trust in individual neighborhoods.

The team then asked residents to rate how much they agreed that ‘people on the streets can be trusted’ in their neighborhood.

Previous research has shown that trust among other residents within a neighborhood is a major player in reducing crime, but Pinchak said this ‘really has to do with the dog walking.’ 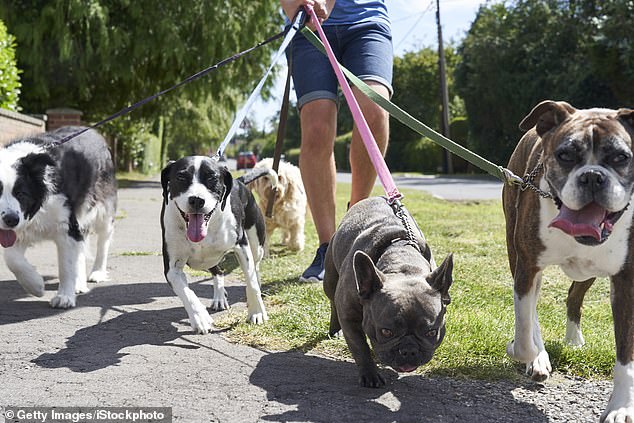 Neighborhoods high in dog concentration had about two-thirds the robbery rates of those low in dog concentration and about half the homicide rates, the study found. However, crime dramatically dropped in places with more dogs and residents who have high levels of trust in each other

‘Trust doesn’t help neighborhoods as much if you don’t have people out there on the streets noticing what is going on. That’s what dog walking does,’ Pinchak said.

‘And that’s why dogs have a crime-fighting advantage over cats and other pets that don’t need walking.’

The study found that more dogs in a neighborhood was also related to fewer property crimes, like burglaries, regardless of how much residents trust each other, Pinchak said.

This is because the sounds of barking and seeing a dog is a big deterrent for criminals.

The protective effect of dogs and trust was found even when a wide range of other factors related to crime was taken into account, including the proportion of young males in the neighborhood, residential instability and socioeconomic status.

Overall, the results suggest that it is beneficial to have a lot of trust in your neighbors to prevent crime—particularly if you add a lot of dogs and dog walkers.

‘There has already been a lot of research that shows dogs are good for the health and well-being of their human companions,’ Pinchak said.

‘Our study adds another reason why dogs are good for us.’

Not only does walking your dog reduce crime, but a separate study found it is a great way to combat stress.

Scientists at the University of Animal Health Technology in Tokyo released the study last year, which found sharing the outdoors with a pet cuts down the release of chemicals known to trigger depression, stress and anxiety.

It also appears to raise levels of chemicals that protect mental health.

The team took saliva samples from 14 dog owners for a week.