Robert Rackstraw was a veteran with extensive military training, serving in the National Guard, the Reserve, the Army and served in one of the most decorated combat divisions in the US Army, the 1st Calvary Division, in Vietnam in 1969.

He was first considered as a suspect seven years after the hijacking in 1978, with investigators saying ‘so many things’ about him seemed to match the description of Cooper.

Little came of the FBI’s suspicions of Rackstraw, but Thomas Colbert officially pointed the finger of blame at him in June 2018, wielding a letter sent to the Portland Oregonian newspaper at the time, said to reveal him to be Cooper. 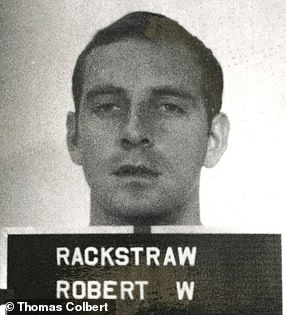 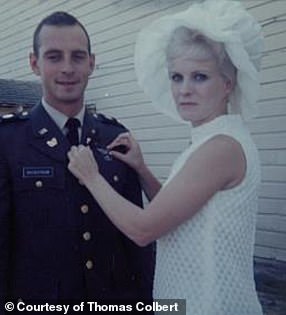 Robert Rackstraw (above), a military vet with a murky past riddled by fraud and con-artistry, died last month and is believed to be legendary 1971 skyjacker DB Cooper

‘This letter is too [sic] let you know I am not dead but really alive and just back from the Bahamas, so your silly troopers up there can stop looking for me. That is just how dumb this government is. I like your articles about me but you can stop them now. D.B. Cooper is not real,’ the letter reads.

‘I want out of the system and saw a way through good ole Unk,’ he writes. ‘Now it is Uncle’s turn to weep and pay one of it’s [sic] own some cash for a change. (And please tell the lackey cops D.B. Cooper is not my real name).’

Colbert said he obtained the letter after successfully suing the FBI for access to the Cooper files. He gave the letter to Rick Sherwood, a former member of the Army Security Agency, to decode.

He previously decoded letters with the team of sleuths in five different notes supposedly sent by Cooper that connected him with Rackstraw.

‘No one even knew about this letter,’ Colbert told the Daily News. ‘When I got it, I noticed it was typed just like (a different Cooper letter), so I called a code breaker and showed it to him. He said, ”Tom, you’re not going to believe it, but his confession is in here,”’ Colbert said.

Sherwood identified four phrases that were used multiple times – ‘D.B. Cooper is not real,’ ‘Uncle’ or ‘Unk’ which referred to Uncle Sam, ‘the system,’ and ‘lackey cops.’

He used a system of letters and numbers to decode those phrases and after about two weeks, he translated ‘through good ole Unk’ into ‘by skyjacking a jet plane’ and ‘And please tell the lackey cops’ into ‘I am 1st LT Robert Rackstraw.’

Another member of the investigation team confirmed Sherwood’s findings.

A nine digit number typed at the bottom of the letter was said to have only been able to come from Rackstraw because it referred to three covert military units he had ties to during the war. 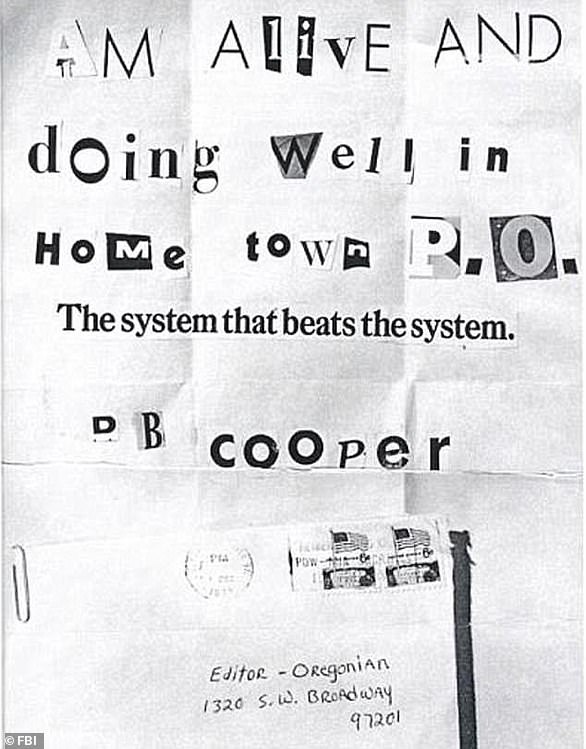 Colbert revealed last February that his code-breaker had uncovered the new hidden messages in four other taunting notes sent by Cooper in the late 1970s, including the one above

Colbert revealed last February that his code-breaker had since uncovered the new hidden messages in four other taunting notes sent by Cooper in the late 1970s.

The investigators believe the ‘RWR’ in the coding is Rackstraw’s initials and that it also indicated that he expected a get-out-of-jail card from the federal spy agency if he was captured.

Another note contained coding that read: ‘CAN FBI CATCH ME… SWS’, which Colbert said was Rackstraw taunting agents to track him. He added that the SWS stood for Special Warfare School, which is where the veteran supposedly learned coding.

Colbert said two of the letters were mailed within 30 minutes of Rackstraw’s old California mountain town.

He added that the recent evidence supported what he has argued for some time – that the dare-devil heist was carried out a Rackshaw, who is alive and well in California.

Investigators questioned Rackstraw about the Cooper case in 1978 and eliminated him as a suspect the following year. When Colbert first publicly named and linked Rackstraw to the hijacking, the veteran’s lawyer called the accusations ‘the stupidest thing I ever heard’.

‘Have them sign under the penalty of perjury that everything they stated was true,’ he added.

Rackstraw passed away from natural causes aged 75 in July, 2019. Colbert believes Rackstraw took with him to the grave a number of secrets we may never know about the November 24, 1971 hijacking.