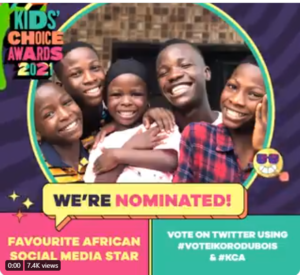 A statement on their official Twitter account said, “Good news! Man dancing we have just been nominated for a Nickelodeon Kids’ Choice Award.plssss guys vote for us

Good news! 🕺🏼 we have just been nominated for a Nickelodeon Kids’ Choice Award.  plssss guys vote for us🙏🏽
Here’s how you can vote:
  On Twitter, using the hashtags #VoteIkoroduBois & #KCA
  Or visit https://t.co/gCYjFz0fn3 to vote#KCA | @NickAfrica