Alabi received a lot of criticism for renovating a health center in his federal constituency.

Many Nigerian criticized him for the health center not up to standard.

He said, “I woke up to a lot of flak over the pictures of the primary health center I facilitated its renovation at Ajiwogbo village, Ibadan. During my campaign, I visited the dilapidated health center. The villagers asked me to help them with the renovation. I promised I would.

“When I got into office, I started working on it. I went to National Health Care Development Agency to come to our aid. Eventually, I brought them down to the place for inspection. After a lot of back and forth and travelling, I was able to facilitate the renovation.

“About those saying the place is too small. Good question. Well, it is a small health center in a small village that was rehabilitated. The place gets like FIVE PATIENTS A DAY. I am not sure there is any sense expanding it. I don’t even have the powers to have it expanded. NONE.

“About entry for wheelchairs and other specifics needed to make the place better, I will write a letter to the agency to ensure that the contractor puts them there. I do not want to have anything to do with the contractor directly. Thanks for pointing those out. 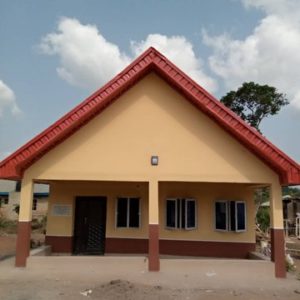 “What played out here is very simple. A health center has been in existence for 20 years. The villagers wanted their “little hospital” renovated. The condition was bad for the doctors and nurses there. I pulled all stops to bring the agency that can do it. The work was done.

“In the original post, it wasn’t like I boasted that this was massive or an “ultra modern” or a world class facility. I helped connect the village and the agency, worked hard to make sure it happened. The entire details are in the pictures. No bragging. I don’t understand the vex.

“I didn’t bother to “shalaye” in my caption because the details are crystal clear in the images so you can imagine my surprise at the outrage. I do not know whether to apologize for facilitating it or for posting the images. Either way, make una no vex. Thank you.”

See his tweets below

I woke up to a lot of flak over the pictures of the primary health center I facilitated its renovation at Ajiwogbo village, Ibadan. During my campaign, I visited the dilapidated health center. The villagers asked me to help them with the renovation. I promised I would.#thread https://t.co/99TGQNdAXP