The Nigerian Military through the Defense Headquarters in Abuja has given various updates on military operations of the The Army, The Airforce, The Navy and other allied security agents in various part of the county.

In a statement released by the Director, Defense HQ Media Operations: Major General John Enenche, the level of successes recorded by the Nigerian Military in various theatres of operations in the north east, north west, north central, state of operations as well as shortcomings were highlighted.

The statement reads that troops of Operation Lafiya Dole in the north east has recorded massive success against ISWAP/Boko Haram elements in the region. 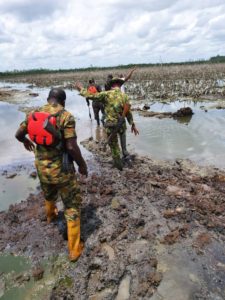 In addition, troops of Operation Whirl Punch in Taraba and Benue State have also given armed militias a run for their money leading to the rescue of kidnapped victims.

#PressRelease #UPDATE ON OPERATIONS OF ARMED FORCES OF NIGERIA FROM 18 MAR TO 5 MAY 2020 pic.twitter.com/ckKdeIeEPO