Rapper Nipsey Hussle was executed in a hail of bullets that severed his spine, punctured his lungs three times and pierced his liver, a Los Angeles court heard Wednesday.

‘It was a devastating attack ….a very personal attack,’ Deputy District Attorney John McKinney told the jury of nine women and three men in his opening statement at the trial of aspiring rapper Eric Holder, 32 – the man accused of using two guns to shoot Hussle at least 10 times in March 2019.

Calling the rising music star’s killing a ‘premeditated and deliberate’ murder, McKinney said Hussle was ‘shot from the bottom of his feet to the top of his head,’ after accusing fellow gang-member Holder of being a ‘snitch.’

Just before firing, he added, Holder told Hussle. ‘You’re through,’ and when the first shot hit him, the Grammy-winning hip hopper yelled, ‘You got me.’ 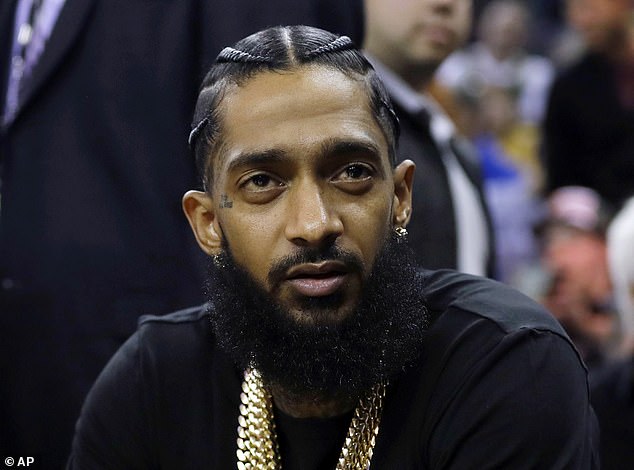 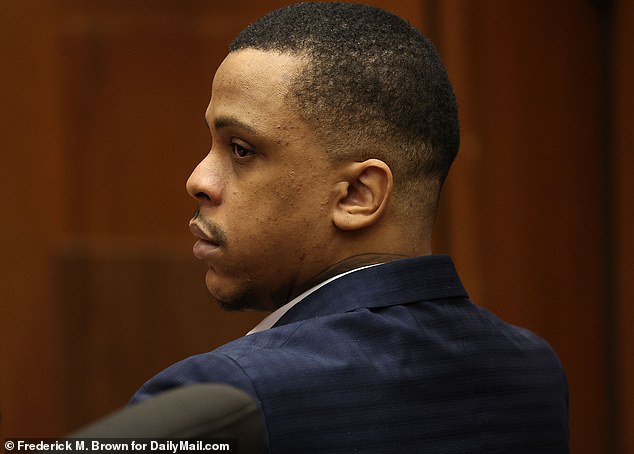 Eric Holder, the suspect in the killing of rapper Nipsey Hussle is seen in Los Angeles County Superior Court Wednesday. Holder is charged with murder and two counts of attempted murder in connection with the attack outside Hussle’s The Marathon clothing store 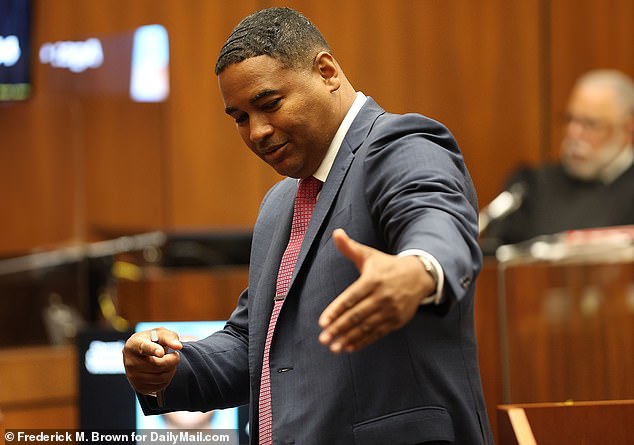 Holder – who grew up in tough south LA where both he and Hussle were recruited by the Rollin’ 60s gang, also known as the Neighborhood Crips, is charged with one count of murder, two of attempted murder, two of assault with a firearm and one of possession of a firearm by a felon.

He has pleaded not guilty.

While deputy DA McKinney maintained that the actions of Holder – who also allegedly kicked Nipsey in the head after shooting him – Holder’s attorney, Aaron Jansen, denied that the killing was premeditated.

‘He is charged with premeditated, first degree murder,’ Jansen told the jury. ‘It should be voluntary manslaughter.’

The lawyer maintained that Holder was ‘so inflamed and enraged’ at Hussle publicly accusing him of ‘snitching’ that he ‘returned and shot’ the hip-hop star.

‘He did not have time to cool off,’ added Jansen. ‘It was not premeditated.’ Jansen asked told the jury that his client ‘did not intend to hurt’ Kerry Latham or Shermi Villnueva. ‘It was not his intention to kill Mr. Latham or Mr. Villnueva. That never entered his mind. He did not know either of them.’

Nipsey’s long-time friend, Herman ‘Cowboy’ Douglas, 49 – who was inside the Marathon clothing store when the shooting happened, rushed out when he heard gunshots, only got find his buddy dying.

‘He was fighting and trying to breath till the ambulance came,’ he told the court. ‘He didn’t say anything, he just kept trying to raise up.’

Douglas – who was talking with Hussle and some other friends in the store parking lot just before the shooting – told the court that in their earlier conversation, the musician told Holder, ‘Hey we heard there’s some paperwork on you that you need to take care of.’

Douglas – who took the stand wearing a jacket with a picture of Nipsey Hussle on the back – explained that ‘paperwork’ meant that Holder’s name could have come up in a police report or court transcript, sparking a rumor that he may have snitched or told on another gang member.

Questioned by McKinney, Douglas – who said Holder’s reaction was to say, “’…..n——-s are hating on me”, meaning talking s__t about me.’ 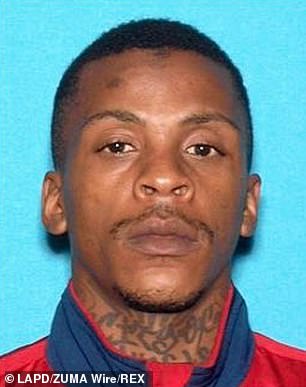 Holder shot his friend after a conversation about him ‘snitching,’ prosecutors said

Asked if he thought Nipsey might be in danger from Holder or if he sensed ‘any animosity or bad blood’ between them, Douglas said , ‘No.’

Under cross examination from Holder’s attorney, Aaron Jansen, Douglas said that in past years, a gangbanger accused of snitching could ‘be beaten up or even killed.’

But he said today penalties on snitching are less harsh, though he admitted, ‘Me getting on the stand right now would be considered snitching.’

The taboo in gang culture against snitching could prove a problem for the prosecution, DDA McKinney admitted earlier.

Even though he was a victim of the shooting and is now in a wheelchair, Kerry Latham is is reluctant to testify against another gangbanger.

‘He’s going to come to court, but he might not be very co-operative,’ said McKinney.

In the gang world, he said, ‘You are not supposed to talk to the police, even if you’re the victim of a crime.’

McKinney added that the other victim, Shermi Villnueva, also has misgivings ab out testifying against Holder.

On Wednesday at criminal court in downtown LA, heavily tattooed Holder wore a dark suit, open white shirt and white sneakers as he sat next to his defense team.

Hussle rose to fame in 2005 with the success of several mixtapes that caught the eyes of Jay-Z, Rihanna, Drake and countless artists who paid tribute to the rapper. He was awarded two Grammys after his death.

He was a father of two, leaving behind daughter Emani, 13 and son Kross, 5 – from his relationships with Tanisha Foster and Lauren London, respectively.

His estate was appraised at $4.1million after his death.

McKinney told the court that Hussle, 33 – whose real name was Ermias Asghedom – was talking with friends outside his clothing store, Marathon, on the afternoon of Sunday March 31, 2019, when Holder showed up in a car driven by a girlfriend Bryannita Nicholson, 32.

Holder – who was known in the neighborhood by his nickname, ‘Sh*tty Cuz’ – shook hands with the Racks in the Middle rapper and others in the group gathered there at a strip mall at Slausen Avenue and Crenshaw Boulevard.

Then, said McKinney, the conversation turned to the subject of ‘snitching.’

‘Nipsey was telling Mr. Holder that there was word on the street about you snitching.’

McKinney explained that in gang culture, snitching is a very serious offense. ‘It’s a very volatile subject if a gang member is considered a snitch. It’s not not like snitching on your little brother or sister.’

After the snitching conversation, Holder took off with Nicholson in her car, but asked her to drive around the block and park in an alley behind the strip mall.

Holder put on a red shirt, then went back to where Hussle and his friends were still outside talking, said McKinney and in the view of several cameras mounted in the strip mall, said ‘You’re through’ to Hussle and started firing with a 40-caliber semi-automatic handgun in one hand and a revolver in the other.

Hit by the first fusillade, Nipsey, managed to call out ‘You got me’ before falling to the ground, his spine severed. He was hit by 10, possibly 11 shots, the court heard. 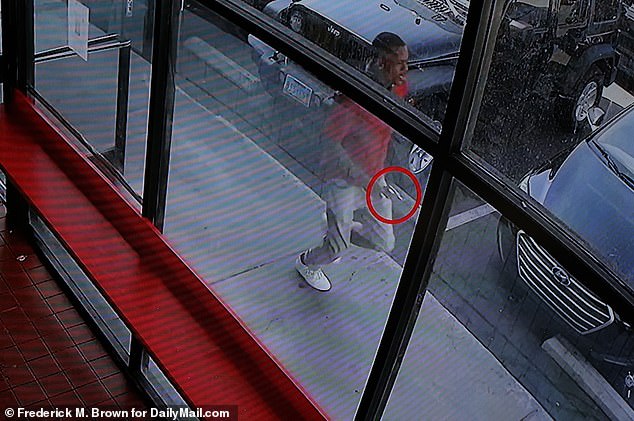 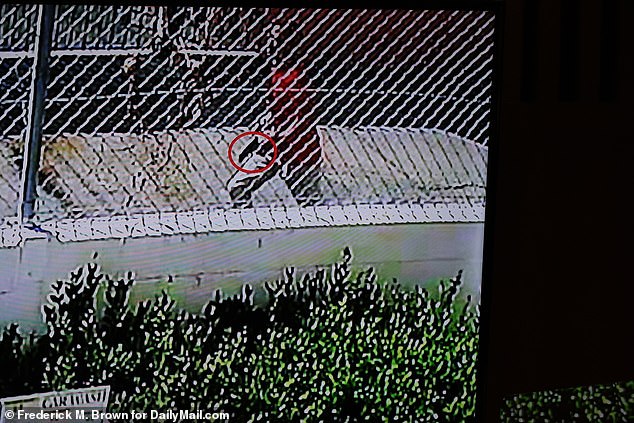 Holder fled the scene and ran back to his friend’s car, on the way he was captured on camera still holding both guns, said McKinney 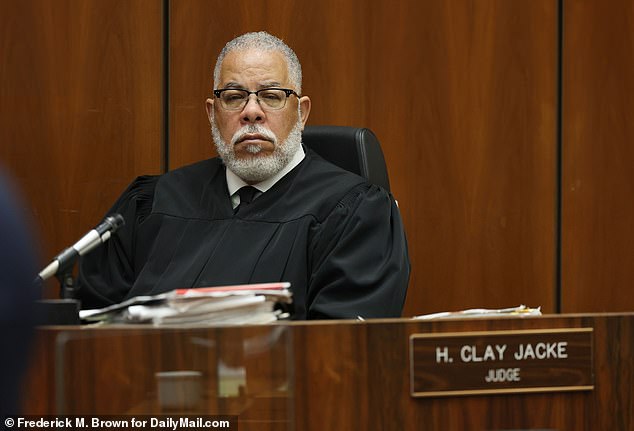 Judge H. Clay Jacke interrupted Jansen’s opening statement, calling both sides’ attorneys for a conference before sending the jury out for lunch

Holder fled the scene and ran back to Nicholson’s car, and on the way was caught on security camera still holding both guns, said McKinney.

He ordered Nicholson: ‘Drive before I slap you.’ She took him back to Long Beach where he was living at the time.

Just two days later, Holder was arrested, added McKinney. ‘He was still wearing the same clothes as he was wearing at the time of the shooting.’

The attempted murder and assault with a firearm charges stem from Holder allegedly also shooting 56 year-old Kerry Latham and Sharmi Villnueva, 44, – both friends of Hussle – during the attack.

Latham, who had just been released from prison after serving 25 years for murder, was hit in the back and is now in a wheelchair, said McKinney. Villnueva was much luckier. The bullet hit his belt and bounce off.

But, he said that this was a case of a crime committed ‘in the heat of passion.’

Judge H. Clay Jacke interrupted Jansen’s opening statement, calling both sides’ attorneys for a conference before sending the jury out for lunch.