If you weren’t alive during the cold world era between the United States and the Soviet Union between 1947 and 1991, another one appears to be unfolding before your eyes, the North-South food blockade in Nigeria.

The tension between the North and the South has been on the rise for a while especially with the recent ultimatums issued by some state governments and fast-rising Yoruba activist, Sunday Igboho as regards the nefarious activities of armed Fulani herdsmen in the South.

The incident at Shaha Market in Ibadan three weeks ago which led to the loss of lives and valuable properties on both sides of the divide appears to have influenced the food blockade between the two regions. 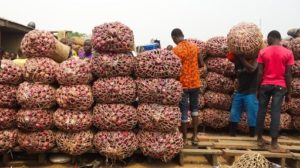 The last few days have not only seen a hike in the price of food items such as onions, tomatoes, yam among others which most often than not comes from the North, but also a diversion of food items loaded in trucks to neighbouring countries like Niger and Cameroun.

Miyetti Allah Cattle Breeders Association have vowed that the current North-South food blockade will continue until the safety of its members in the South is guaranteed. 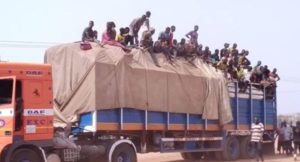 “Except those who may decide to take other routes to get to the state or those who may act in defiance to the directive, the traders would not come from the north and those who come may be stopped or sanctioned”, Mohammed Aliyu, coordinator of the Kwara State chapter of the group was reported to have said in a statement

Also, A group identified as the Amalgamated Union of Food and Cattle Dealers of Nigeria (AUFCDN) is demanding a sum of N4.7 billion from the federal government as compensation for the food items that were destroyed during the incident at the Shasha market.

Another group based in the North told the Nigerian Tribune that the food items of farmers in the North won’t waste because they are already being transported to neighbouring countries.

“As I speak to you, my people are already shipping their goods, onions, tomatoes and what have you to Niger (Republic), Cameroon, and other neighbouring countries through Illela border. Already, we have diversified. Our people have already found a way of not wasting their goods. They will not be wasted. They will be sold just like the way they were being moved to the south-west, south-east of south-south. So, my people will end up not losing anything.’’

The Federal Government so far seems to be unconcerned about the current situation of things but social media as expected hasn’t been quiet.

Individuals on Twitter for instance have fired shots of arguments and counter-arguments at one another in response to the North-South food blockade.

Here are some of the latest opinions on the North-South food blockade;

They destroy our crops with cows, and chased alot of us from farming activities. Now, they are blocking food supplies from North to South. This amalgamation na scam.

FULANIS MAKE THE HAUSA FARMERS LOSE IN MILLIONS AS A RESULT OF FOOD BLOCKED FROM North To South .
MEANWHILE THE FULANIS ARE GETTING BILLIONS OF NAIRA FROM THE FED.GOVT VIA KIDNAPING AND TERROR.
WHO IS FOOLING WHO?

Northern Governors, religious leaders & top guns are silent on this food blockade from North to South cuz they have one mind

Southern Governors, religious leaders &
big guns can't do this kind of thing at all. We have a lot of saboteurs

Has The Presidency, The Senate, The Representative, or The Governors said or done something about the food blockade from North to South yet?