Truth about hospitalisation figures revealed: Number of Covid patients on intensive care wards is HALF its peak level 12 months ago, data shows

By Eleanor Hayward Health Correspondent For The Daily Mail

Intensive care admissions are half the levels of previous peaks – with Boris Johnson insisting this means he is ‘confident’ the NHS will not be overwhelmed.

Despite record cases and soaring admissions, the number of patients in intensive care units has remained flat since Omicron arrived in the UK.

Just five per cent of patients in hospital with Covid-19 are on mechanical ventilators, compared with 11 per cent at the peak of the pandemic last January.

The Prime Minister said Omicron is ‘milder than previous variants’ and ‘keeps people in hospital for a shorter period’.

He told a Downing Street press conference yesterday: ‘While hospital admissions are rising quickly, this is not yet thankfully translating into the same numbers needing intensive care that we saw in previous waves.’ 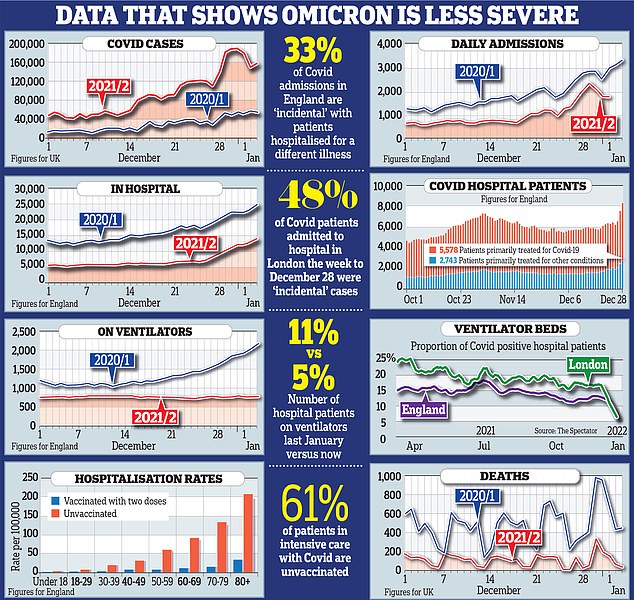 Mr Johnson said the next few weeks would be ‘a difficult period for our NHS’, but added: ‘I’m also confident that we can get through it.

Although Omicron does cause lots of hospitalisations, it is pretty clearly resulting in fewer people in ICU, and certainly less mortality than we’ve seen from other variants.’

He added it was ‘absolutely crazy’ that people were ending up in intensive care with Covid because they were refusing the vaccine, with the latest figures showing 61 per cent of patients on ventilators are unvaccinated.

He added that Omicron was not leading to a surge in deaths, after another 48 were recorded yesterday.

But Mr Whitty warned hospital admissions and deaths could keep increasing in the coming weeks as the variant spread to older and more vulnerable age groups.

He said: ‘In London it does look as if the numbers in younger adults are falling… But rates in older people are still going up and these are the people who are much more likely to be hospitalised.’

The number of Covid patients in England’s hospitals has doubled in the past fortnight and there are currently 15,055 patients receiving treatment. But only 797 are on ventilators – fewer than two months ago when cases were significantly lower.

At the peak last January, there were 34,336 patients in England’s hospitals, including 3,736 in intensive care. And the proportion of patients with Covid in hospital who end up in intensive care has plummeted compared with the numbers in April.

Health chiefs say hospitalisations are plateauing in London and they are hopeful this could soon be replicated across the whole of the country. 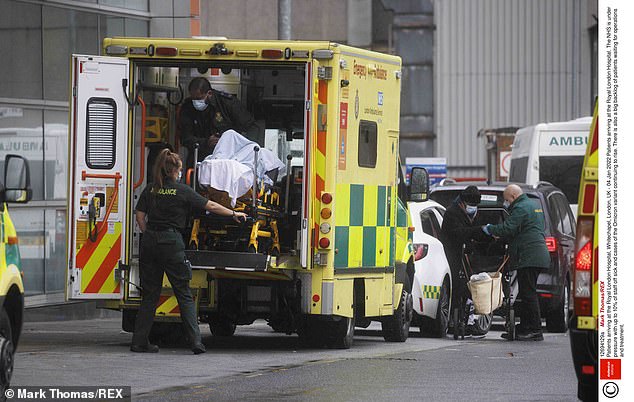 The number of Covid patients in England’s hospitals has doubled in the past fortnight and there are currently 15,055 patients receiving treatment

Another 1,881 people were admitted with coronavirus in England yesterday, down from 2,370 on December 29.

Chris Hopson, chief executive of NHS Providers, said there had not yet been a major increase in the number of seriously ill older people needing critical care and mechanical ventilation.

Mr Hopson added: ‘There are a number of chief executives who are saying, if we were going to see that surge, we probably would have seen the beginnings of it up to now, so there are glimmers of hope.’

Research by the UK Health Security Agency shows that patients with Omicron are between 50 and 70 per cent less likely to need hospital treatment than previous variants.

And the proportion of patients admitted ‘with’ Covid rather than ‘because’ of it has increased.

Latest data shows a significant rise in so-called ‘incidental’ admissions, when for example someone breaks their leg and happens to test positive when arriving at hospital.

Just 67 per cent of Covid patients are being treated primarily for the virus – compared to 73 per cent a month ago.

Almost half of those admitted to hospitals in London last week were admitted ‘with’ not ‘for’ Covid, figures suggest.