NYC Mayor Eric Adams spoke at the United Nations on Monday and said the 27 years Nelson Mandela spent in prison reminded him of his suffering with dyslexia that he experienced as a child.

Adams gave the speech on Mandela Day, which the General Assembly designated to honor his life and legacy.

The mayor also compared the ongoing crises of COVID with Mandela’s long struggle for freedom.

‘The ongoing crisis of COVID, war and crime have imprisoned us in our own Robben Island prisons,’ Adams said. ‘But these are temporary conditions. They are not life sentences.’

Robben Island prison is where Mandela spent his sentence. Adams said he visited the prison and said we’re all in ‘our own Robben Island Prison’ after two years of COVID but that we’re resilient and must address global challenges like poverty and vax distribution.

‘These are temporary conditions, they’re not life sentences,’ he said. 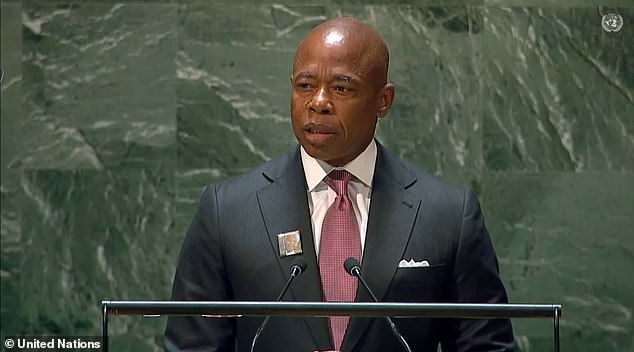 Adams told the assembly that his own story s reflective of climbing out of the dark times, just as Mandela did. He talked about growing up in poverty, struggling with dyslexia as a child and being arrested as a teenager.

‘My own personal story is reflected in that,’ he said. I was dyslexic and denied support services as a child. I was arrested as a youth and felt rejected as a person but I knew it was not het end, not a burial. And today I stand before you energized with all that I have endured on my journey too.’

Adams went on to say that he knew it was not the end, not a burial, but a planting – and that we must be inspired by Mandela and turn pain into purpose.

‘But I knew it was not the end, not a burial. ‘That Mandela-like energy will allow us to turn our pain into purpose.’

‘His example reminds us that the darkest times cannot quench our spirit or dim our hopes.’

The UN held its first Mandela Day in 2010. The leader died at the age of 95 in 2013. He had been freed in 1990 amid intense international pressure. He was then elected South Africa’s first Black president.

Adams’ comparison drew backlash from New Yorkers on social media. Many asked why he wasn’t addressing the escalating crime in the city. Others simply called him a clown.

Adams’ comparison drew backlash from New Yorkers on social media. Many asked why he wasn’t addressing the escalating crime in the city 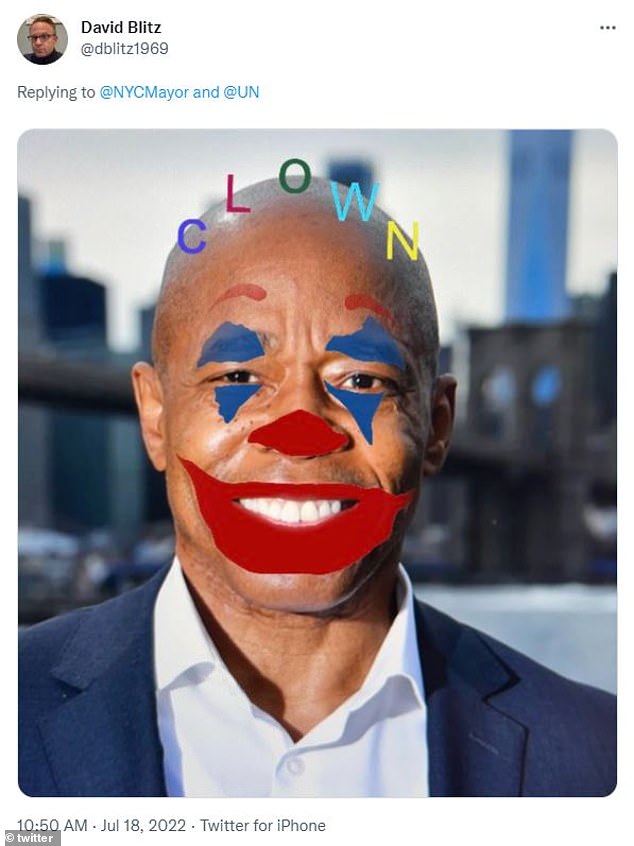 Others on social media simply called Adams a clown

Britain’s Prince Harry was also in attendance on Monday. He told the UN Monday that the overturning of constitutional rights in the United States was part of ‘a global assault on democracy and freedom.’

‘This has been a painful year in a painful decade,’ the royal told delegates.

He cited the continuing fallout from the pandemic, climate change, disinformation and Russia’s invasion of Ukraine before alluding to the Supreme Court’s recent overturning of America’s nationwide right to abortion.

‘And from the horrific war in Ukraine to the rolling back of constitutional rights here in the United States, we are witnessing a global assault on democracy and freedom, the cause of Mandela’s life,’ Harry said.

The royal paid tribute to Mandela, South Africa’s anti-apartheid hero who spent 27 years in prison before being elected the country’s first Black leader, as ‘not only a man of conscience’ but ‘a man of action.’

Harry, 37, invoked that sentiment to urge leaders to tackle climate change, as his wife Meghan Markle looked on from the chamber.

‘As we sit here today, our world is on fire again,’ said the prince, adding that ‘historic weather events are no longer historic.’

‘More and more, they are part of our daily lives. And this crisis will only grow worse unless our leaders lead.

‘Unless the countries represented by the seats in this hallowed hall make the decisions, the daring, transformative decisions that our world needs to save humanity,’ he added.