Top NYPD boss Commissioner Keechant Sewell vented about the revolving door of justice in the Big Apple after nearly five dozen New Yorkers were struck by gunfire over the Fourth of July weekend.

There were 41 shootings across the five boroughs from Friday to Tuesday morning as the city celebrated the nation’s birthday, with 56 victims and seven fatalities from the city’s chronic gun problem.

Sewell, at a press conference on Thursday to discuss the crime statistics in the city, called for criminal justice reforms that allow repeat offenders to remain free pending their trial to be kept behind bars so that they don’t commit more crimes. 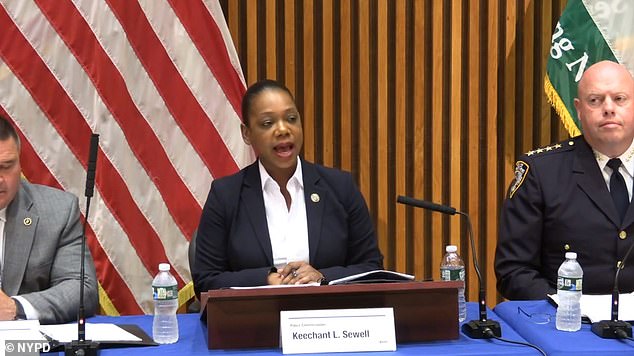 Although homicides and shootings have dipped in New York City over the last six months since last year, the Independence Day weekend was particularly violent.

Shootings in June were down a quarter from last year and murders for the month plunged 31 percent. 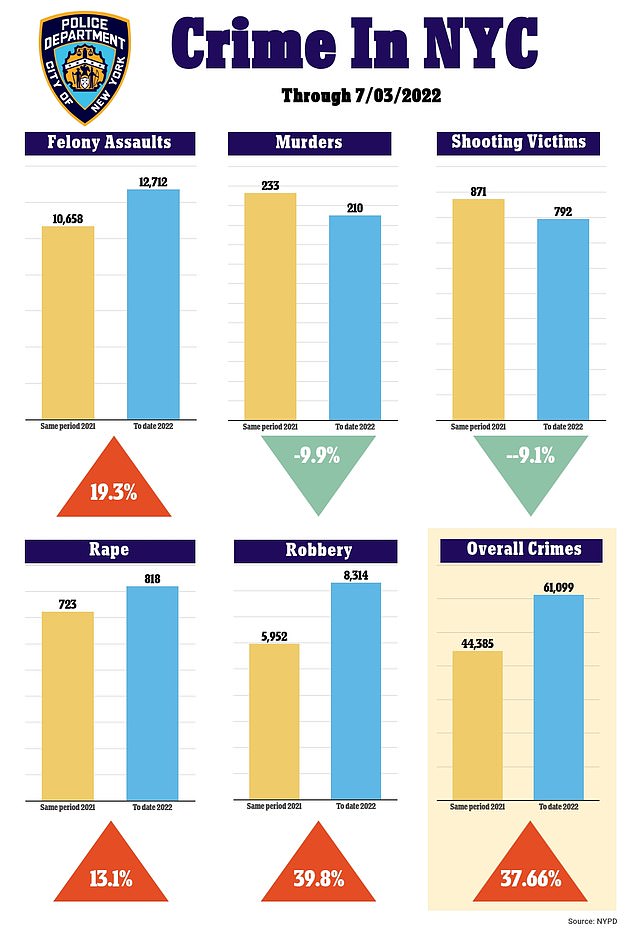 From Friday to Sunday, the amount of gunplay rose 60 percent from last year, according to NYPD stats. There were only 13 people shot in the city on the Fourth of July in 2021, compared to 21 on the holiday this year.

The boyfriend of an NYPD employee was shot in the trendy retail district of SoHo in a drive-by shooting that left him hospitalized.

Other victims in the holiday violence include a 62-year-old man fatally shot in the chest in the the Belmont section of the Bronx; a bodega shooting in East New York, Brooklyn, that killed two; and a Jamaica, Queens, barbecue that ended in gunfire with a two men and a woman hospitalized. 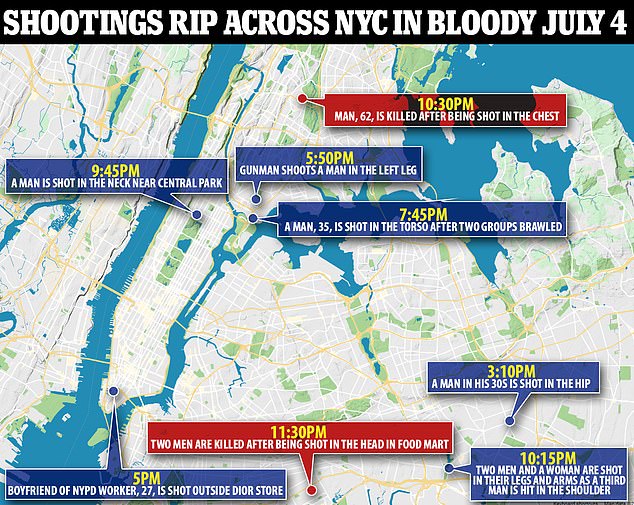 Shootings in NYC over Fourth of July weekend rose 60% this year, according to the NYPD. At least three people were killed on July 4 alone

Sewell’s voiced rose during the Thursday press conference as she spoke of the victims of the gun violence.

‘When we read the crime numbers we see the people who are negatively affected,’ she said. ‘People who just want to be and feel safe going to the store or to the park.’

Although the commissioner rattled off a number of crime suppression programs that she has developed with the other NYPD brass. 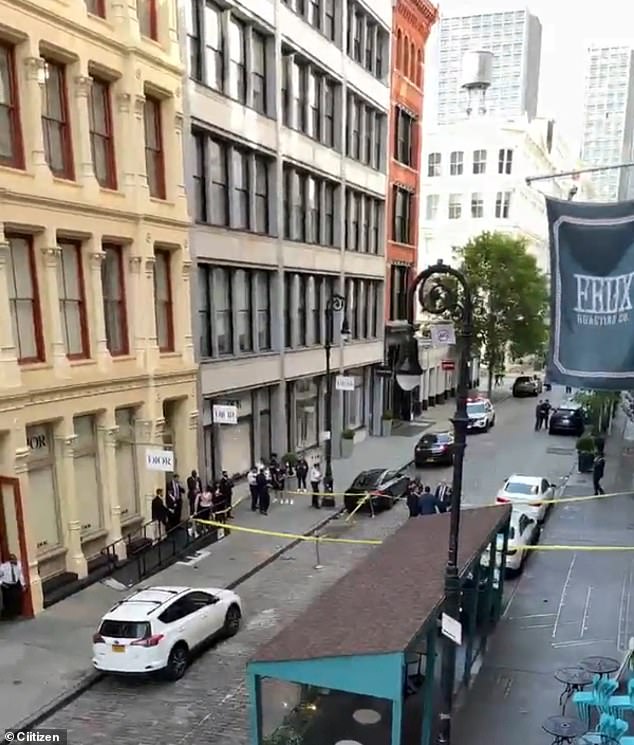 The boyfriend of an NYPD employee was shot in the arm while sitting in a car outside the Dior store in Soho, Manhattan

She said that 355 people were arrested on gun charges in June and there have been 3,700 guns taken off the street since January.

However, overall crime jumped 37 percent year-over-year, including a 41 increase in grand larceny, a 39 percent spike in robbery, and a 34 percent rise in burglary since last year.

Her frustration was apparent when she spoke about the rate of recidivism in the city and the problem with criminal justice laws that sailed through the state Legislature two years ago.

“We at the NYPD know we have challenges and we step forward to face them, but we should not have to face them from within our own criminal justice system,” Sewell said.

According to department stats, 80 percent of those arrested on gun crimes are released on low or no bail.

‘We would like all of us to be rowing in the same direction,’ she said. ‘But as we have said repeatedly we have a number of people who are out with open cases and we would like them to be incarcerated as opposed to being out able to commit more offenses.’

She said that she would like to see more changes to the bail reform law and judges exercising their ability to consider a suspect’s danger to the community in setting bail.

‘It’s criminal justice reform that we can speak to as the reason that these numbers are what they are,’ she said, adding that lawmakers were ‘well-meaning.’

Despite the head wins with the increase in crime, Sewell said that her department is determined to keep perpetrators off the street.

‘We keep arresting the same people over and over again and we’re not going to stop putting them in custody,’ she said.