A hero Ohio woman saved the lives of a family of eleven by banging on the door in the middle of the night to warn them their garage was on fire.

Haily ‘Moss’ Strong, 23, saw Brittany Downing, 31, and Josh Ellis’ house burning from a mile away in Fairfield around 1am on July 5, according to ABC 7 Chicago.

Strong, who only lives a few neighborhoods away, was driving home from a friend’s Fourth of July party and was nearly home when she noticed ‘black smoke above the trees.’

‘It was super dark out too. I could just barely see a bit of black smoke above the trees,’ she told DailyMail.com on Wednesday.

‘I honestly thought it was just a rogue firework or something at first, but I knew I wouldn’t sleep that night if I didn’t at least drive over and see what was going on.’

She drove toward the flames with her roommate before the Ring camera shows her running up the couple’s front door and banging on it, nervously telling the Ring camera: ‘You guys’ garage is on fire!’

By the time she arrived, the flames were already breaching the house, Strong told DailyMail.com. It is unclear what started the fire and Strong said that it is still being investigated.

She banged on the for nearly two minutes before Ellis, 33, answered. Although it only felt like ‘seconds’ to the 23-year-old, who was struggling to breathe from all the smoke and could feel the ‘heat on my face and arm’ from the fire. 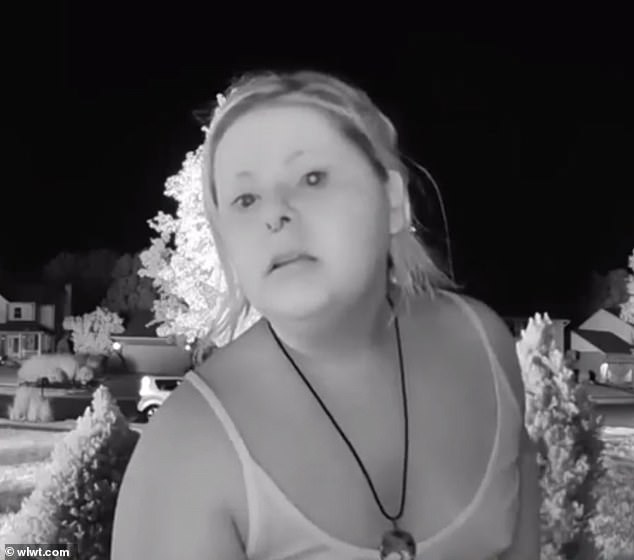 Haily ‘Moss’ Strong, 23, began banging on Brittany Downing, 31, and Josh Ellis’ home after she noticed their garage was on fire from a mile away and followed the flames 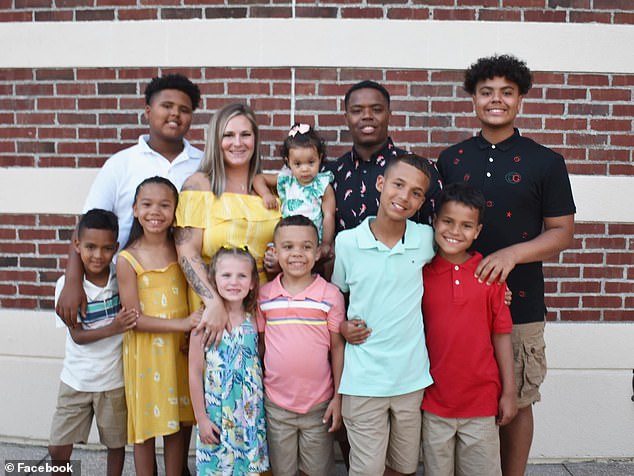 Inside the home, was Downing-Ellis family (pictured), including all nine of their children

‘At the time, I was mostly just praying that the garage would stop exploding – there was multiple small explosions going off – and praying that I could get the family to wake up,’ she told DailyMail.com.

Strong even consider ‘breaking a window’ because she was ‘terrified they were sound asleep.’

‘I was in fight or flight and was thinking with logic over feelings, which I like to think helped me keep my head down and focus on that night.’

Despite her panic, by the time Ellis answered the door, she apologized.

‘I’m so sorry, your garage is on fire,’ a nervous Strong told a shirtless Ellis.

Downing and Ellis were inside their bedroom watching Stranger Things while their nine children slept in their rooms inside the house when Strong notified them of the dangerous fire. 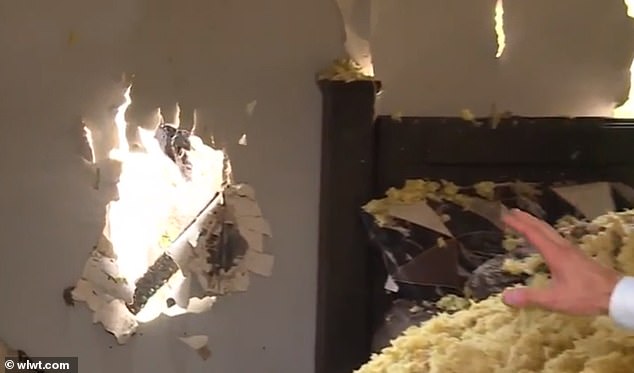 Although the cause of the fire is unknown, the flames engulfed the garage, which was closest to the couple’s bedroom (pictured)

The parents bedroom was the closest to the garage, but they did not hear fire alarms going off, as the fire had already engulfed the structure, and the wind was blowing the smoke away from their home.

Just as they started to smell the smoke, Strong began knocking on their door.

‘My fiancé was looking at me and said: “What’s that smell?” and that’s when the door knocked. It was simultaneously,’ Ellis told CNN.

‘Because we smelt that and somebody knocked, we instantly kind of knew, panic mode, something’s going on because somebody’s beating down the door.’

Strong said she was ‘surprised’ no one was outside when she arrived and yelled at her roommate to call 911. She told CNN: ‘I really didn’t think that much, I just jumped into action.’ 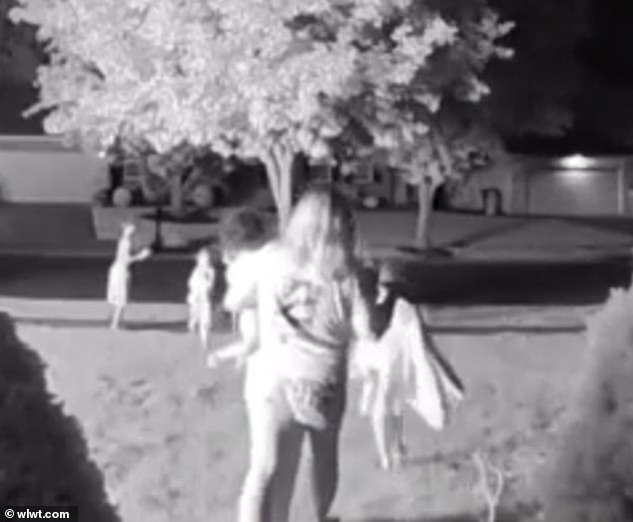 Ellis, 33, said Downing had turned him just seconds before Strong began banging on their door to ask what the funny smell was. After learning their garage was fire, the parents began waking up their children and grabbing them out of bed. The whole family made it out alive 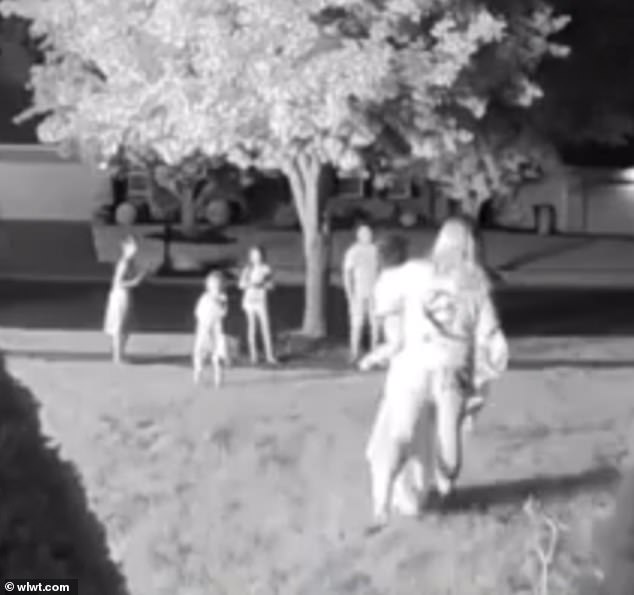 The family huddle near the front tree as flames engulfed their Fairfield, Ohio, home

Ring camera footage shows the family scrambling to get out of the house as one of their children yells: ‘Move your a**es.’

The parents ran throughout the house, knocking on doors with two fists and ‘physically grabbing them out of the bed.’

‘They were knocked out,’ Ellis told CNN.

Downing acknowledged the devastating outcome that could have happened if Strong hadn’t stopped at their door, saying: ‘I don’t know if me and him would be here today for them kids.’

Strong told DailyMail.com she didn’t know how many people were in the home when she stopped by to notified them and said she was ‘shocked’ when she saw how ‘huge’ the family was.

‘Not only was it a huge family, but so many little kids,’ she told DailyMail.com. ‘I was shocked and felt this huge wave of relief once I got them all to the other side of the street and semi calmed down.

‘It wasn’t until I saw a photo of all 11 of them together on Facebook that night that it really sank in for me how many I actually saved that night, it was really intense, honestly, a combination of relief and amazement that fate worked out how it did.’ 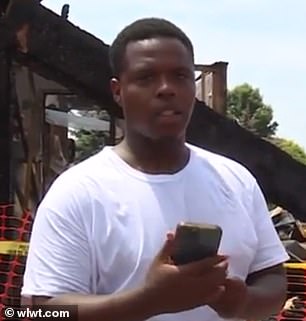 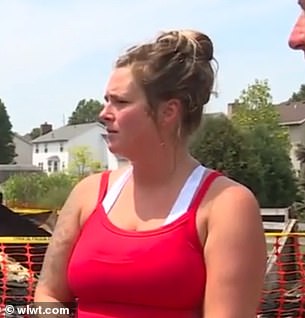 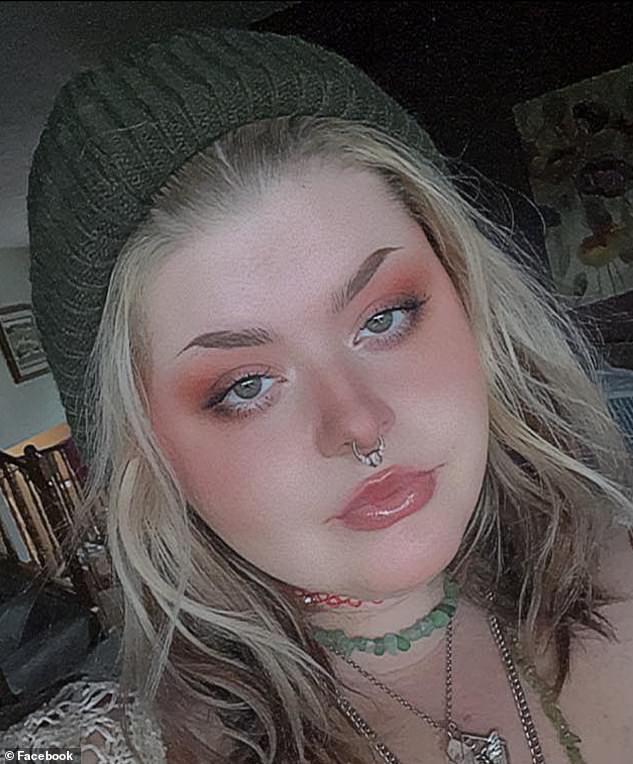 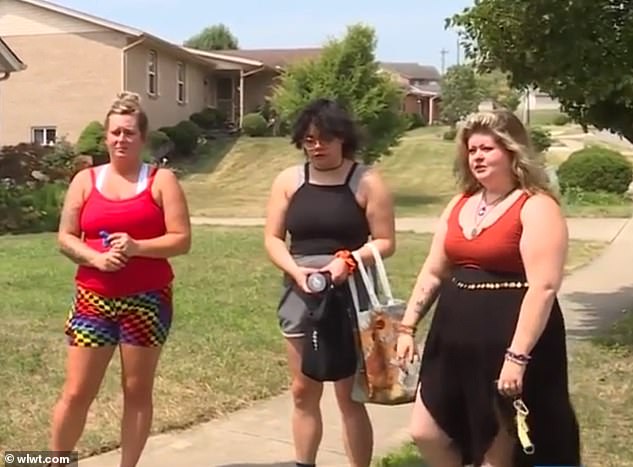 The family and Strong reunited (pictured) after Downing (far left) posted a photo of Strong (far right) on her Facebook page to thank the random stranger who saved her family. Strong revealed she was the stranger in the comments and they reunited in-person afterward

Downing would later post a screenshot of her from their Ring camera and thank the random woman on Facebook. The Ellis-Downing family and Strong would later reconnect on Facebook, with Strong revealing in the comment section that the woman in the screenshot and that she was glad they all got out. The group would later reunited in-person.

‘It was really beautiful. I was surprised at how much emotion I felt. Obviously, I was happy to be able to help them out and to get them out ok, but it was great to see them in person,’ Strong told WLWT.

Strong also told DailyMail.com that the house is expected to take eight to 12 months to repair and is currently unlivable. She also believes the family is staying with relatives.