The terror suspect charged with killing two people and injuring 21 more at an Oslo gay bar has halted the investigation because he won’t answer police questions.

Ex-plumber Zaniar Matapour, 42, is refusing to speak to police when recording devices are in use, as is normal in Norway.

The Iran-born ex-refugee insists the audio will be manipulated against him.

Matapour, who is charged with murder, attempted murder and terrorism, has been diagnosed with paranoid schizophrenia, PTSD and ‘delusions’.

But police interviews on Saturday and Sunday came to a quick end, his lawyer added.

‘He did not want any recording of the questioning, neither by video nor by sound, because he thought the police would manipulate it,’ Elden told TV2. 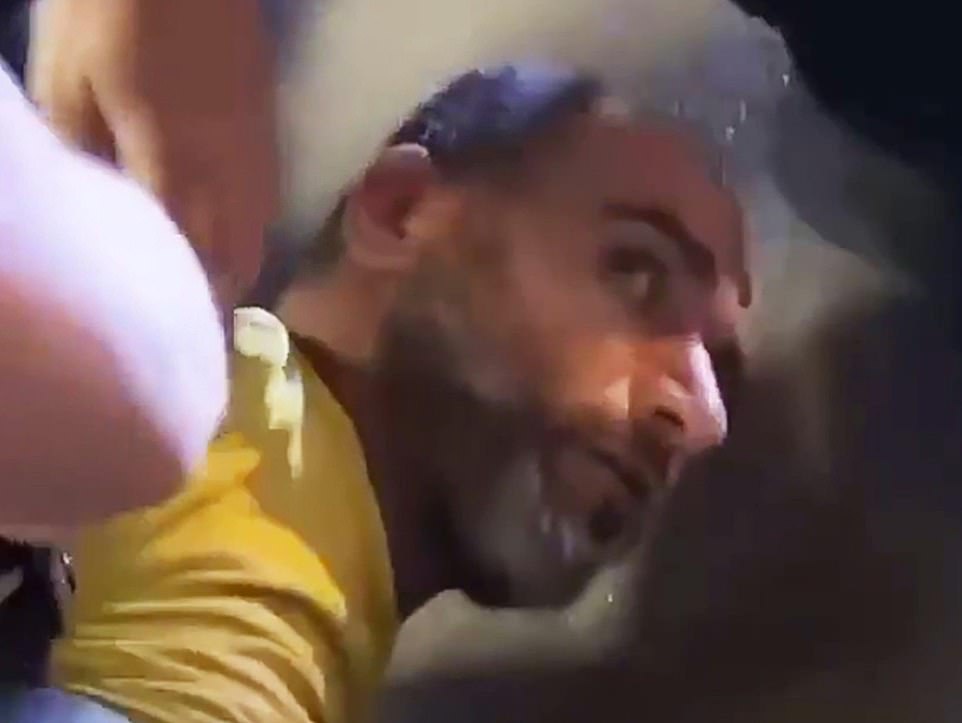 Zaniar Matapour, 42, has been charged with terrorism, murder and attempted murder 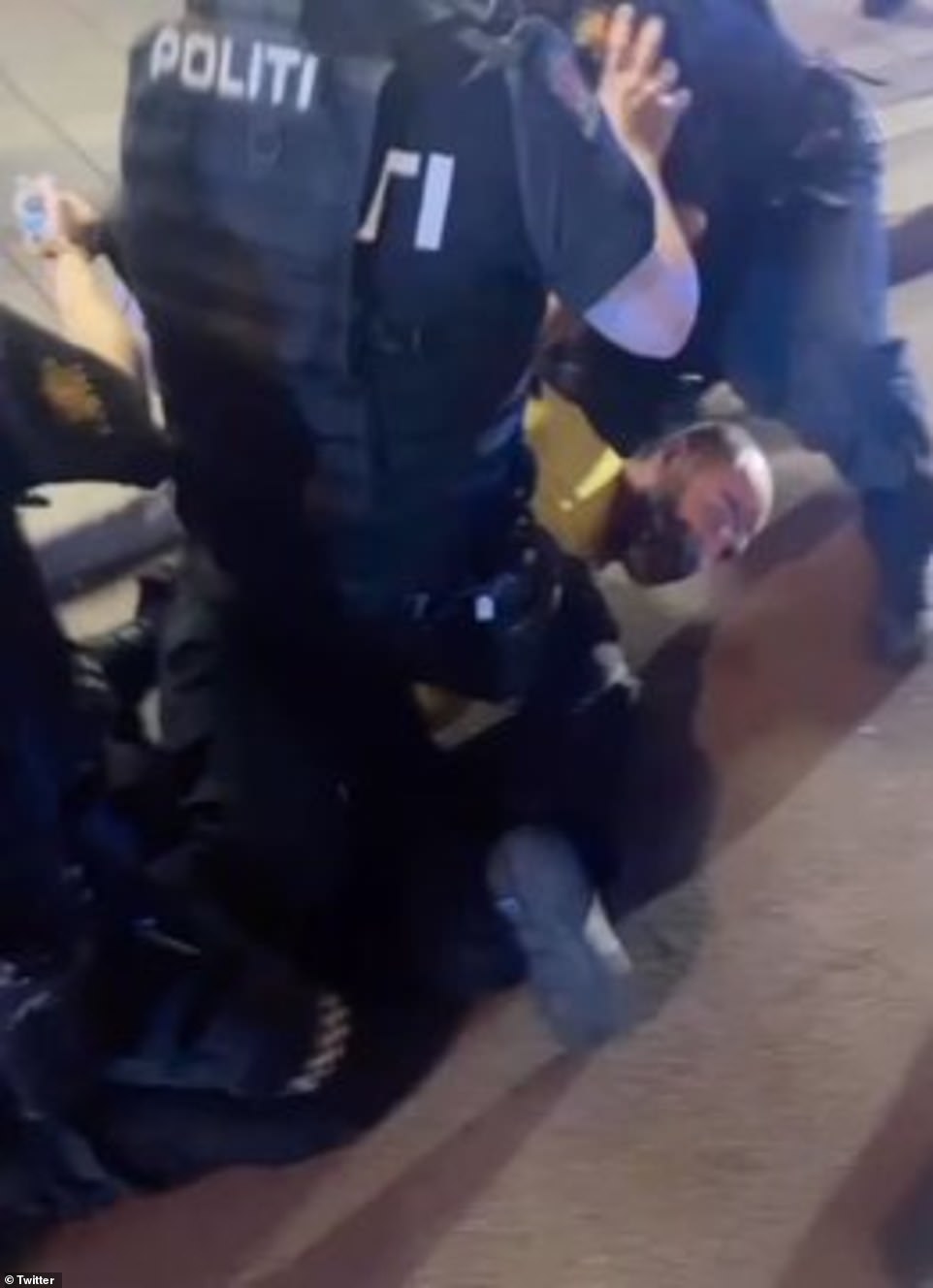 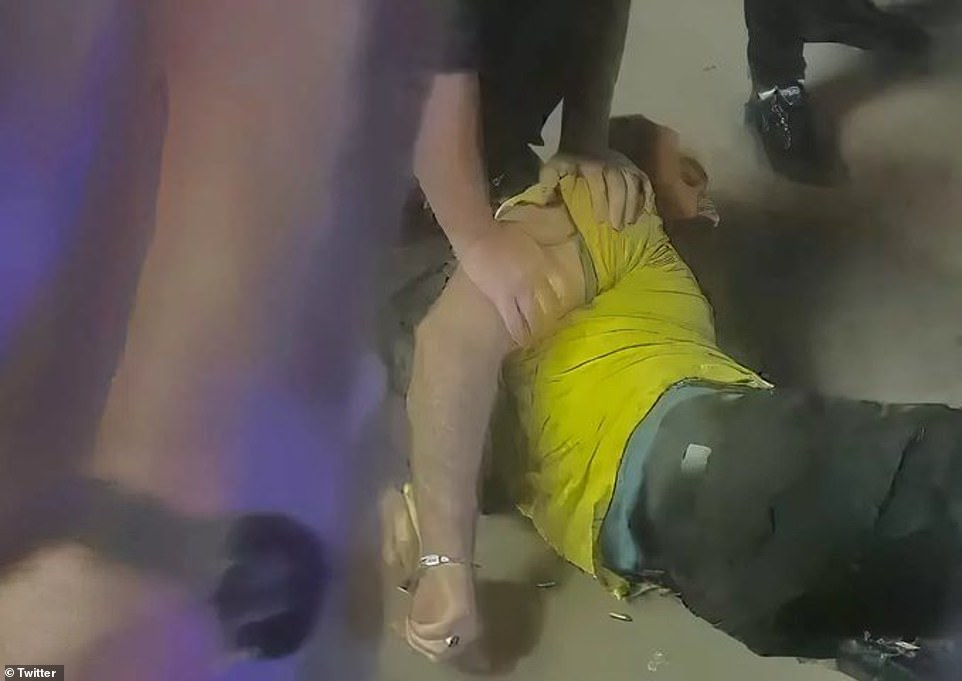 Matapour, filmed by a nearby eyewitness in footage posted to Snapchat, has been charged

Matapour was born in Iranian Kurdistan before coming to Bergen as a 12-year-old.

His first mental health diagnosis was made in the 1990s, with his listed conditions including paranoid schizophrenia, PTSD and ‘delusions’.

The suspect’s lawyer, John Christian Elden, was not immediately available for comment when contacted by Reuters.

Elden told broadcaster TV2 it was not possible to draw any conclusions about the motives or reasons for the attack.

Matapour is subject to a psychiatric evaluation in the coming days as part of the investigation, police said.

Police lawyer Christian Hatlo said: ‘Our overall assessment is that there are grounds to believe that he wanted to cause grave fear in the population.

‘We need to go through his medical history, if he has any. It’s not something that we’re aware of now.’

Norway’s royal family and senior officials gathered to remember the two people killed in an apparent terrorist attack on a gay bar in Oslo this weekend.

Zaniar Matapour, 42, has been charged with terror offences after allegedly opening fire at the city centre LGBT+ haunt London Pub in the early hours on Saturday morning.

More than 20 people were injured, with ten seriously wounded in the gunfire.

Matapour was arrested at the scene with the help of clubgoers at around 1.15am.

King Harald, 82, also did not attend the memorial, but said yesterday that he was ‘horrified’ by the attack.

The monarch added: ‘We must stand together to [defend] freedom, diversity and respect for each other.’ 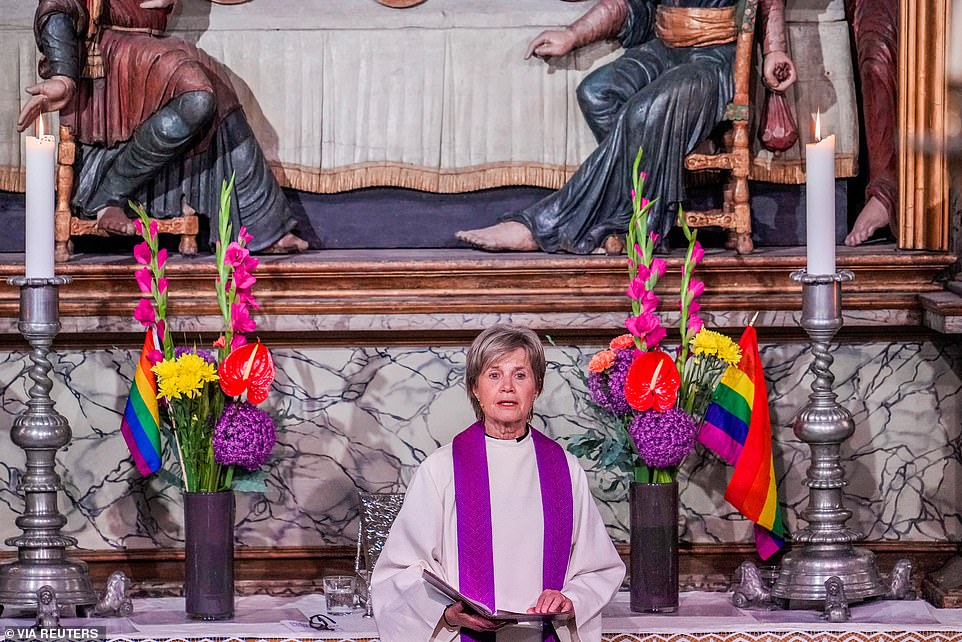 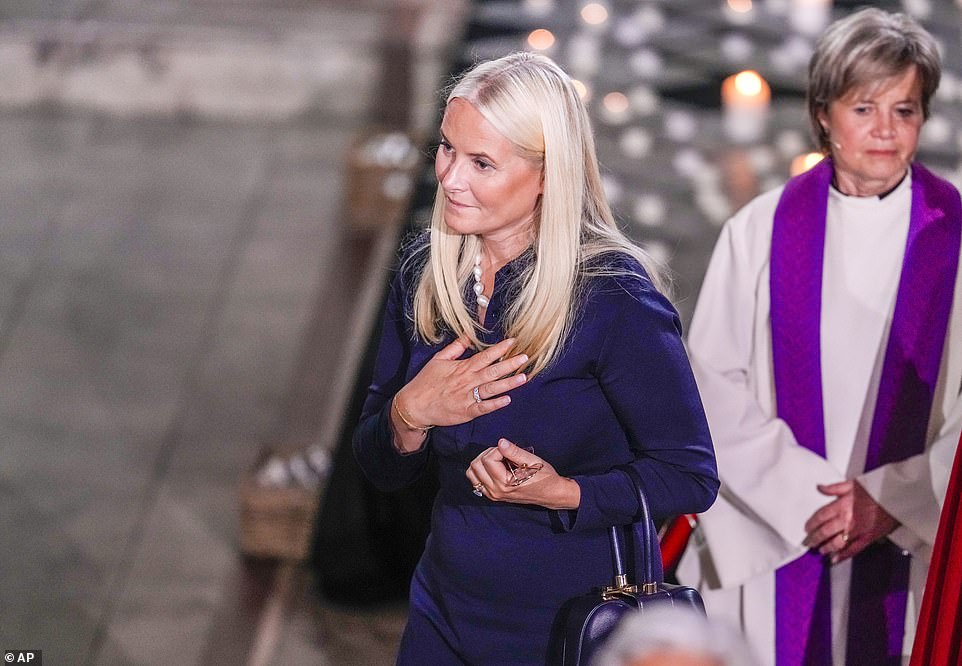 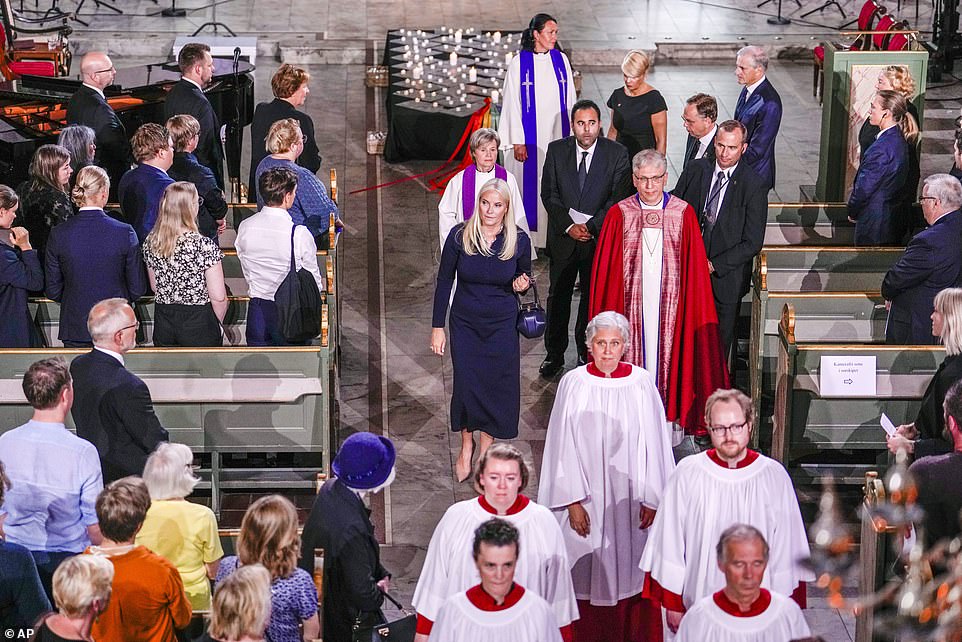 Crown Princess Mette-Marit (centre, in navy) was pictured entering the service before midday with Church of Norway leaders 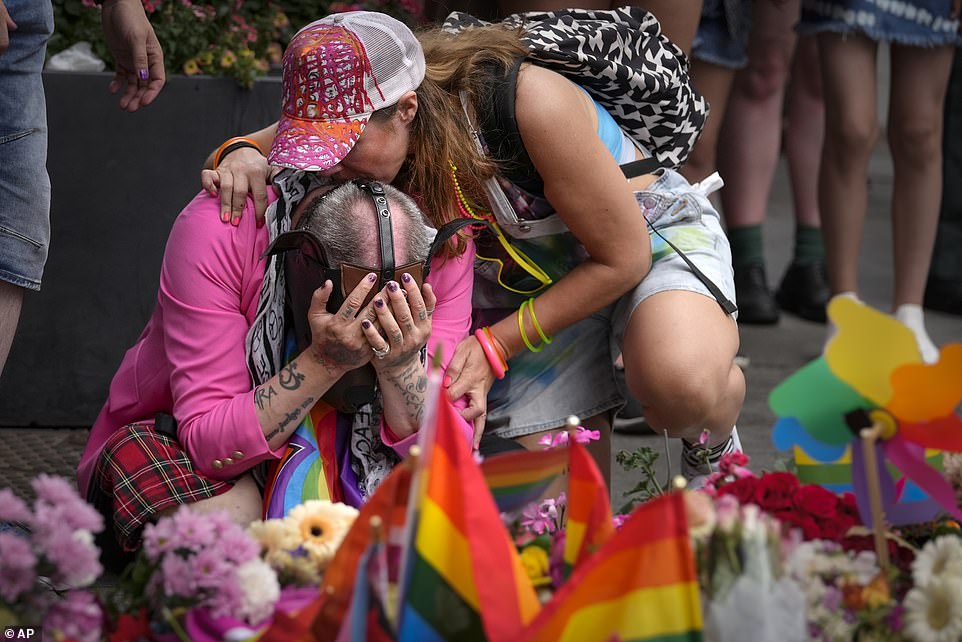 One mourner struggled to contain his emotions at the decorated scene of the crime yesterday, where many people gathered 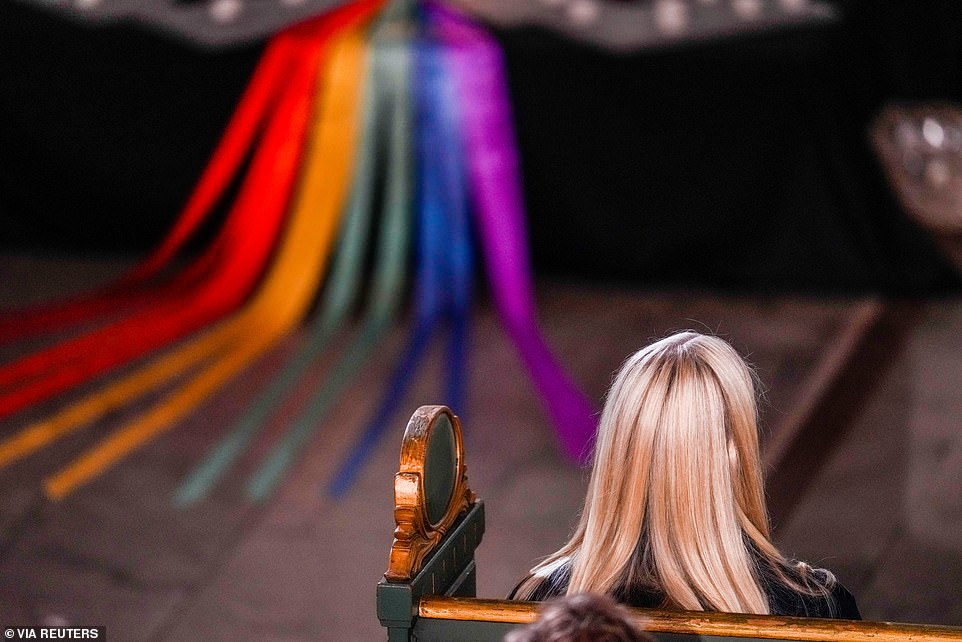 The cathedral was decorated in solidarity with LGBT+ Norwegians. The Crown Princess sat on the front row 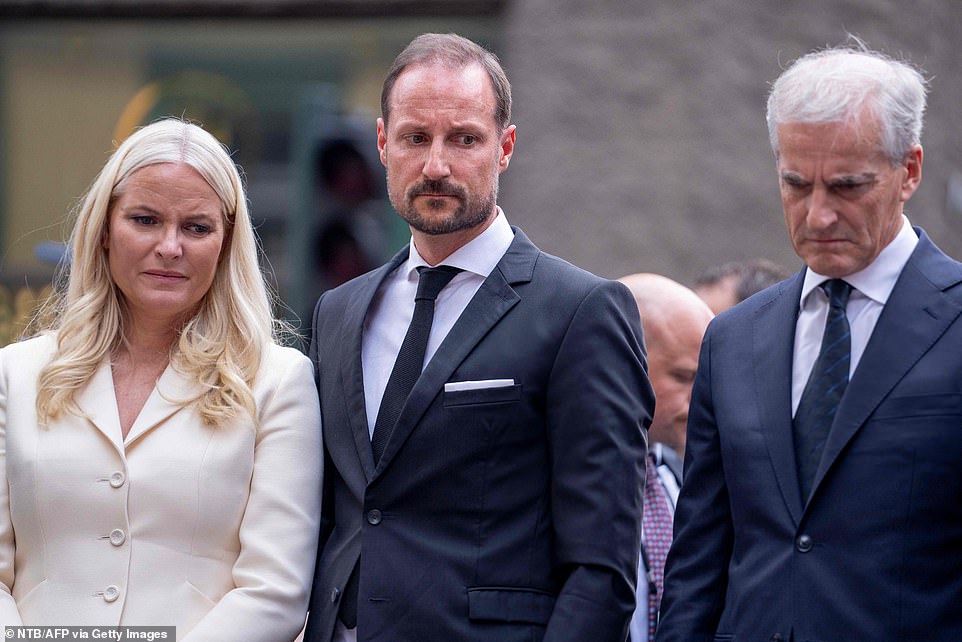 Crown Prince Haakon (centre) was unable to attend today’s service after testing positive for Covid. He is pictured between Crown Princess Mette-Marit (left) and the prime minister (right)

Matapour is an ex-plumber with severe mental health issues including paranoid schizophrenia and PTSD.

He was investigated by the state security services as a potential threat just one month ago, but found not to pose any imminent danger.

Speaking at the memorial service, Støre said the attack may have put an end to the official Pride parade, which was called off, but did not stop the fight ‘against discrimination, prejudices and hate.’

The premier, dressed in black, talked about the thousands of people that spontaneously demonstrated on Saturday in the streets of Oslo, waving rainbow flags and laying flowers at the crime scene to honor the victims. 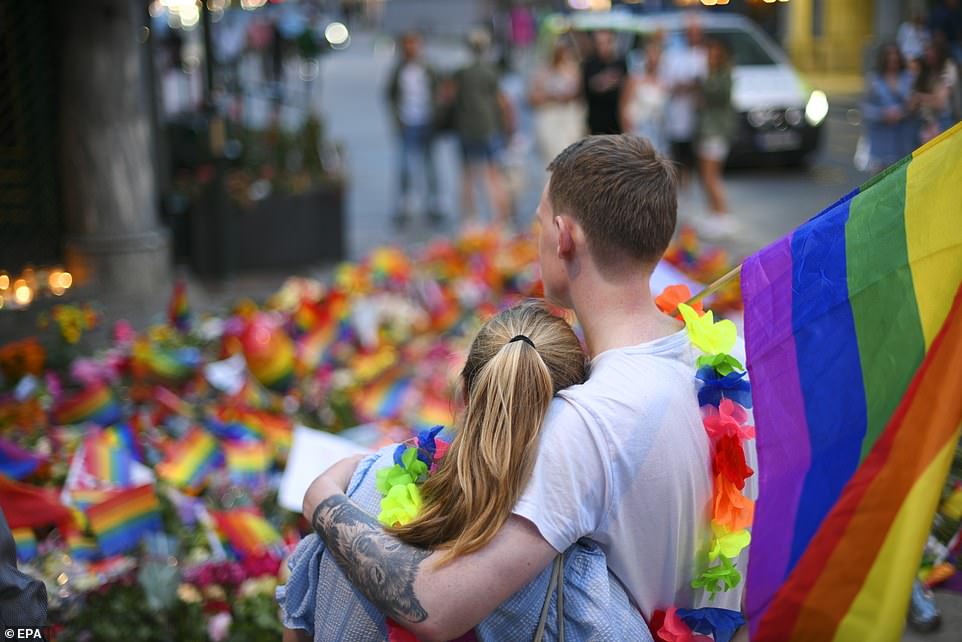 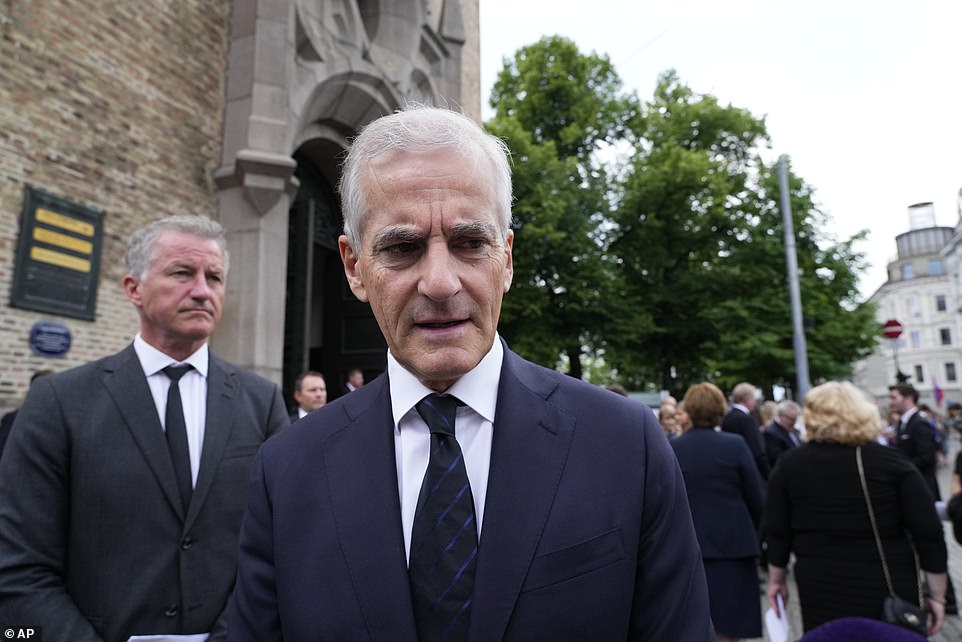 ‘During the day, the city was full of people who wanted to speak out, about sorrow and anger, but also about support and solidarity and the will to continue on fighting, for the right of every individual to live a free life, a safe life,’ he said.

‘These misdeeds remind us of this. This fight is not over. It is not safe from dangers. But we are going to win it, together,’ he told the audience – which also included mourners, ministers and Church of Norway leaders – in the cathedral which was decorated with rainbow flags.

The victims in Matapour’s alleged attack have not yet been identified. 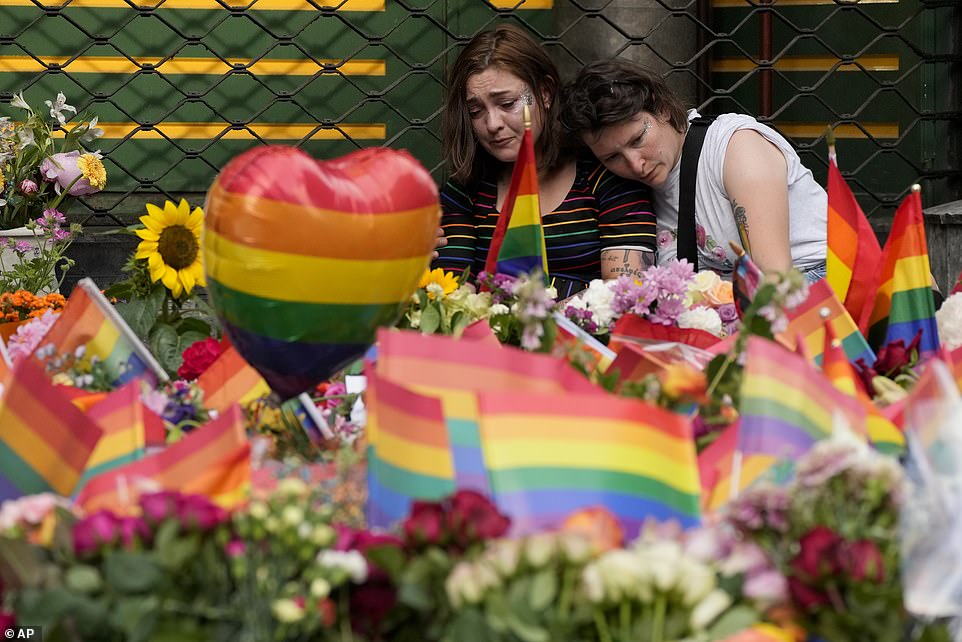 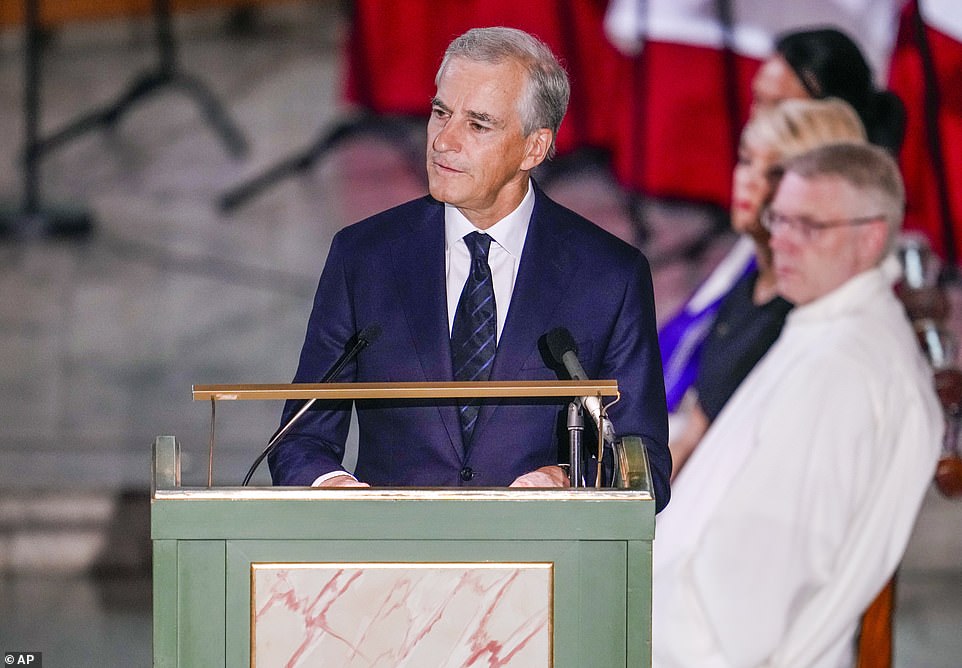 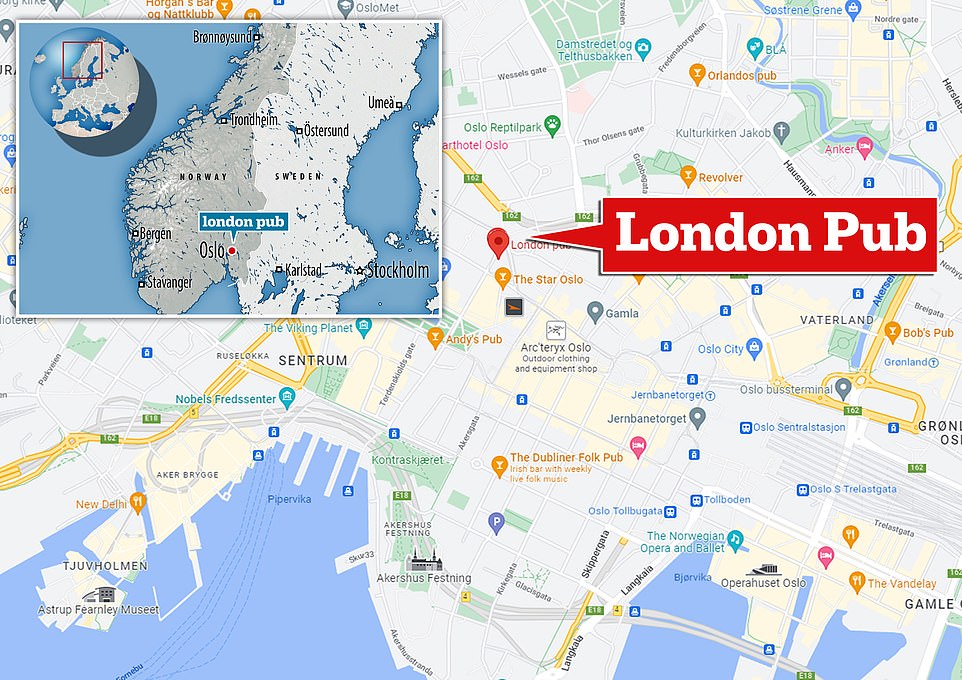 Støre said yesterday: ‘I know that many Muslims are scared and despairing. Then it is our responsibility that no one other than the person behind the attack is responsible.

‘Let there be no doubt, we are one community, we are a diverse community.’

French President Emmanuel Macron slammed the ‘barbarism of the Islamist terrorist’ in a tribute tweet.

After the deadly melee in central Oslo on Saturday, a man was filmed being wrestled to the ground by police with the help of revellers.

One woman described having to play dead to avoid the shooter’s gunfire.

The other site hit during the attack was next door’s Herr Nilsen Jazz Club, where revellers described being hit with flying shards of glass.

She said : ‘There was a woman who pulled me down and told me I had to play dead.’ 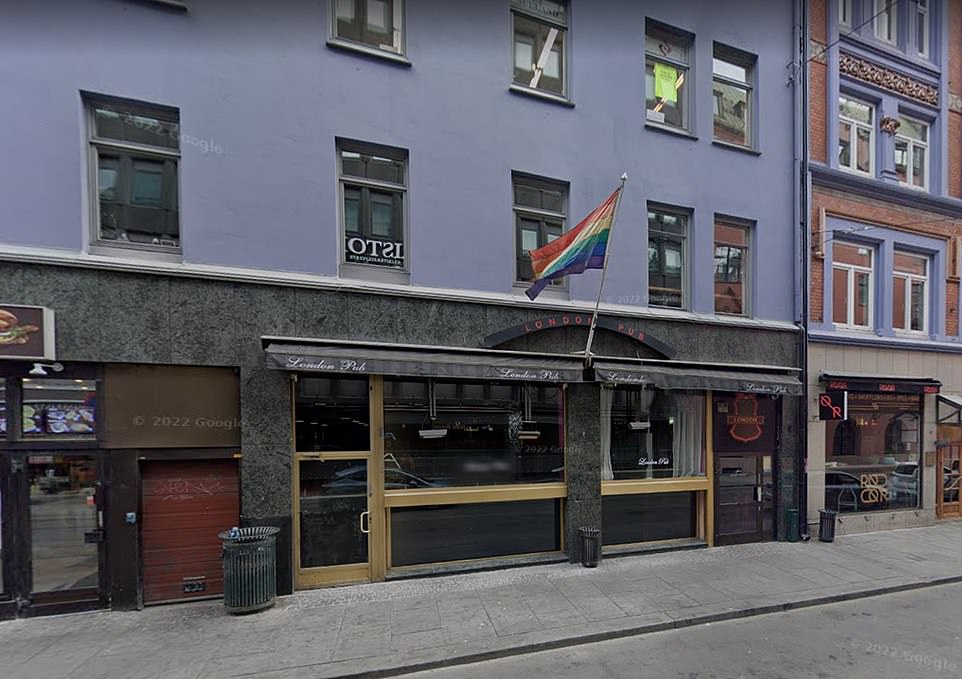 Video on social media showed emergency services outside London Pub, a gay nightclub in Oslo (pictured, file photo) at 1.15am on Saturday morning. Two were killed in the terror attack 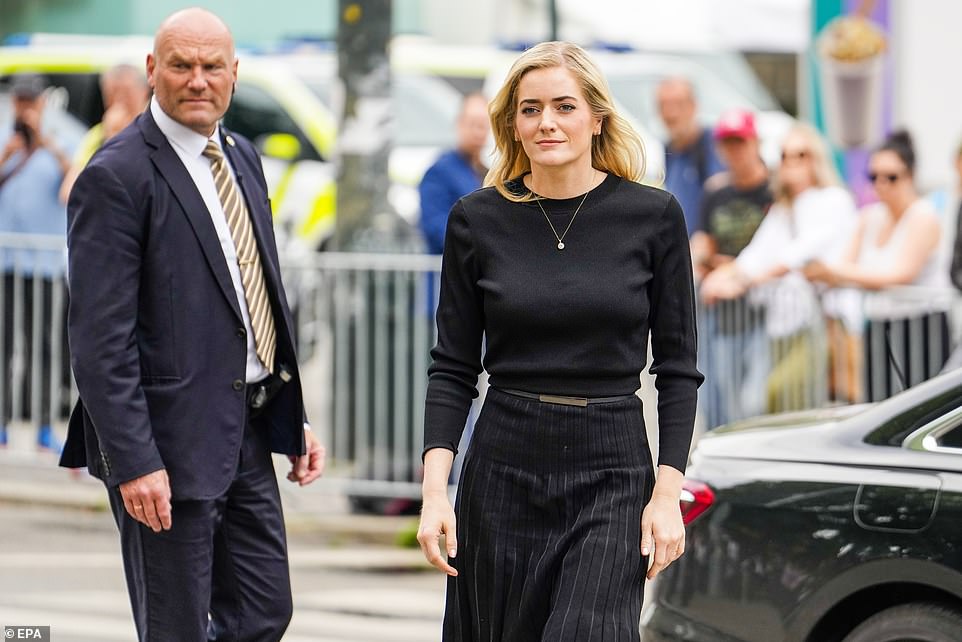 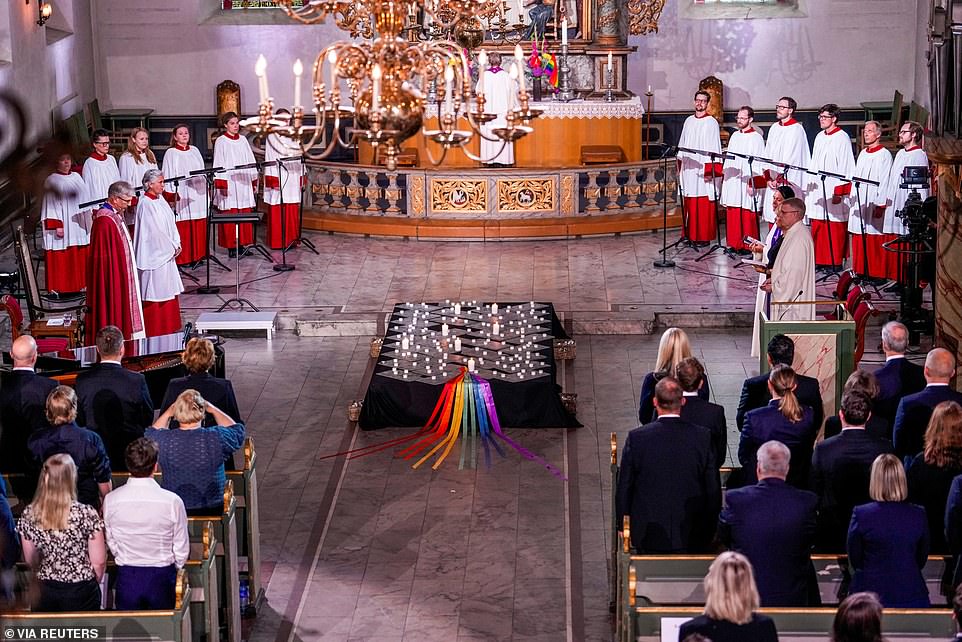 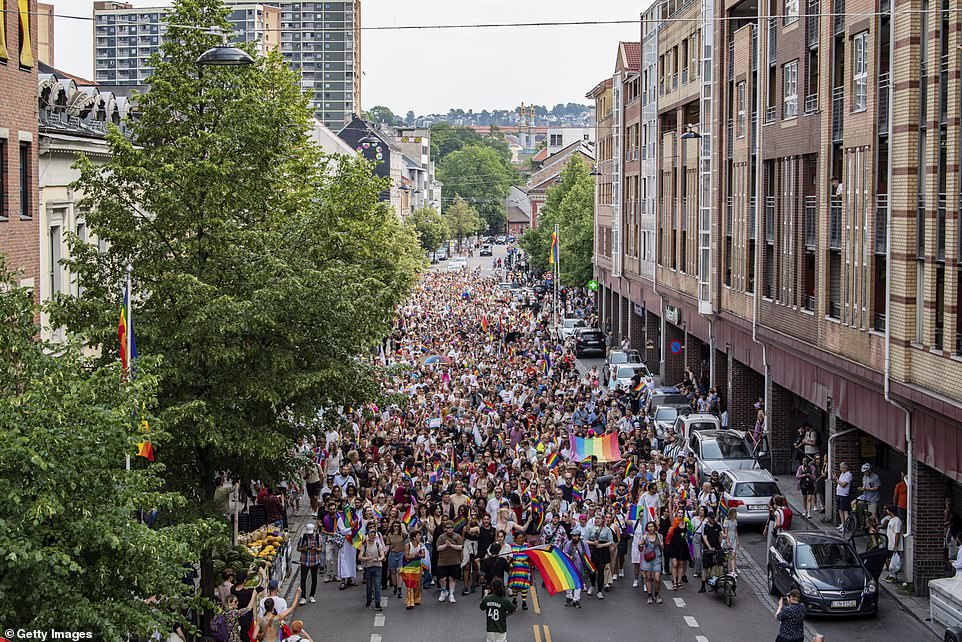 The man then shot the table directly behind her. She escaped London Pub unharmed.

Oslo was due to hold its annual gay pride parade later on Saturday, but organisers cancelled the event amid fears of potential ‘copycat’ attacks.

Planners Oslo Pride wrote on Facebook this morning: ‘Oslo Pride has received clear advice and a recommendation that the parade, Pride Park, and any other event in relation to Oslo Pride be cancelled. 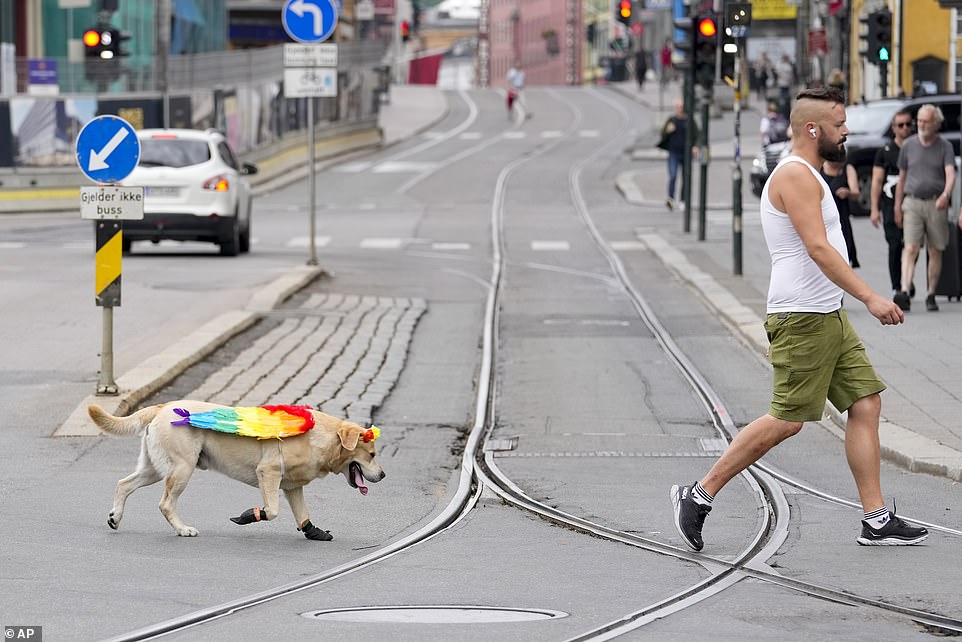 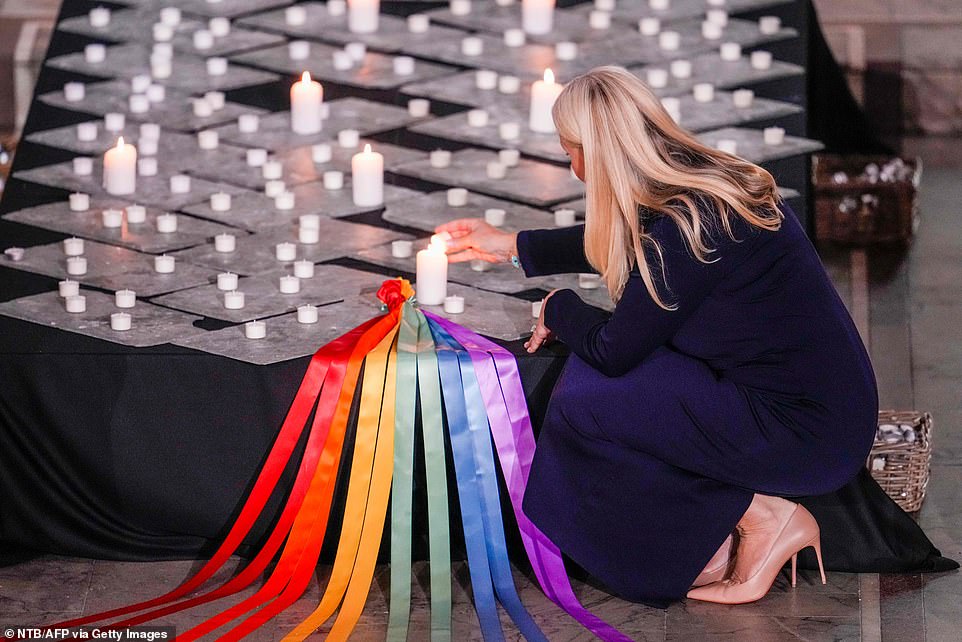 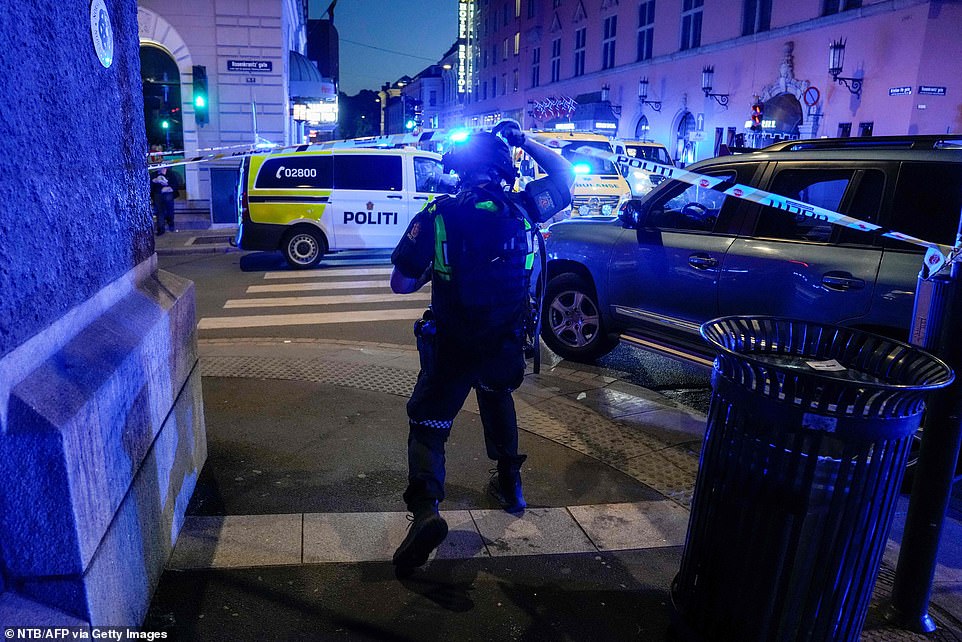 ‘We will follow the police’s recommendation and take care of each other’, lead organiser Inger Kristin Haugsevje added.

National newspaper in Norway, VG, reported that ‘witnesses said people ran from the scene in panic’.

Oslo’s university hospital said it had gone on red alert following the shooting.

The chaotic scene in Oslo is pictured, with emergency services on the pavement treating the wounded 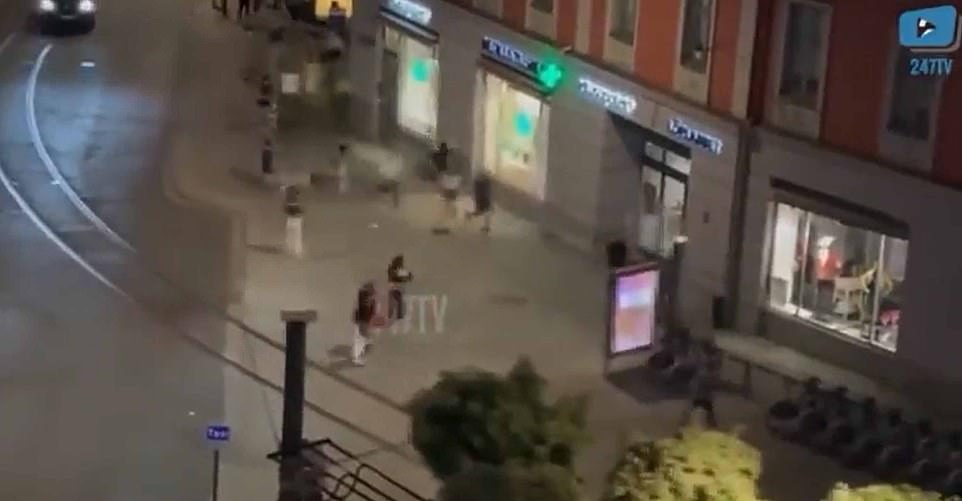 ‘I saw a man arrive at the site with a bag. He picked up a weapon and started shooting,’ Mr Roenneberg told NRK.

‘First I thought it was an air gun. Then the glass of the bar next door was shattered and I understood I had to run for cover.’

‘Our thoughts and solidarity are with the victims, their families and all those affected by this horrific attack, hours before Oslo’s #Pride was due to take place. #LoveIsLove and hate will never win.’