A young couple were shot to death in an ambush-style hit while at a Detroit gas station – all while their 9-month-old girl was in her mother’s dying arms – in shocking surveillance video released by police.

Their infant daughter was miraculously unhurt during the cold-blooded killings at around 8:40 pm Monday at the West Warren and Ashton gas station on the city’s west side.

‘This was not a random act of violence,’ Detroit Police Chief James White told reporters at the crime scene Tuesday.

‘We’re certain that they were targeted … we’re thankful that child was not injured, but she lost both her parents.’ 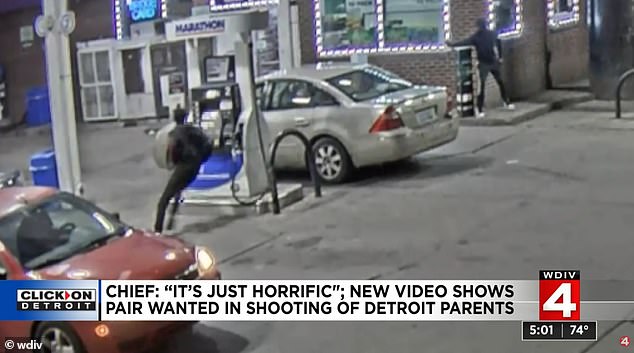 The gas station’s high-definition video, thanks to its participation in the Project Green Light, shows a detailed image of the two gunmen as they ambushed both sides of the couple’s car 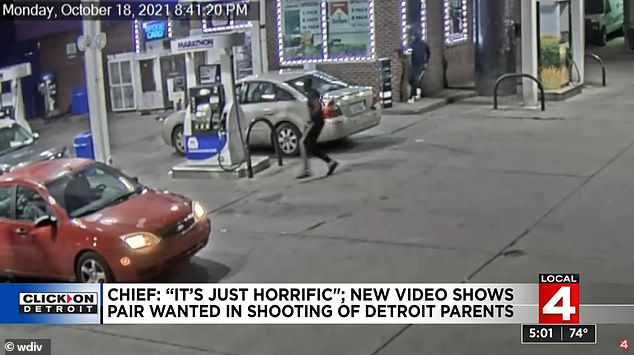 ‘The offenders came from the north … both of them were armed with handguns, guns in hand, (they) ran up to the vehicle, and fired shots into the vehicle,’ police added 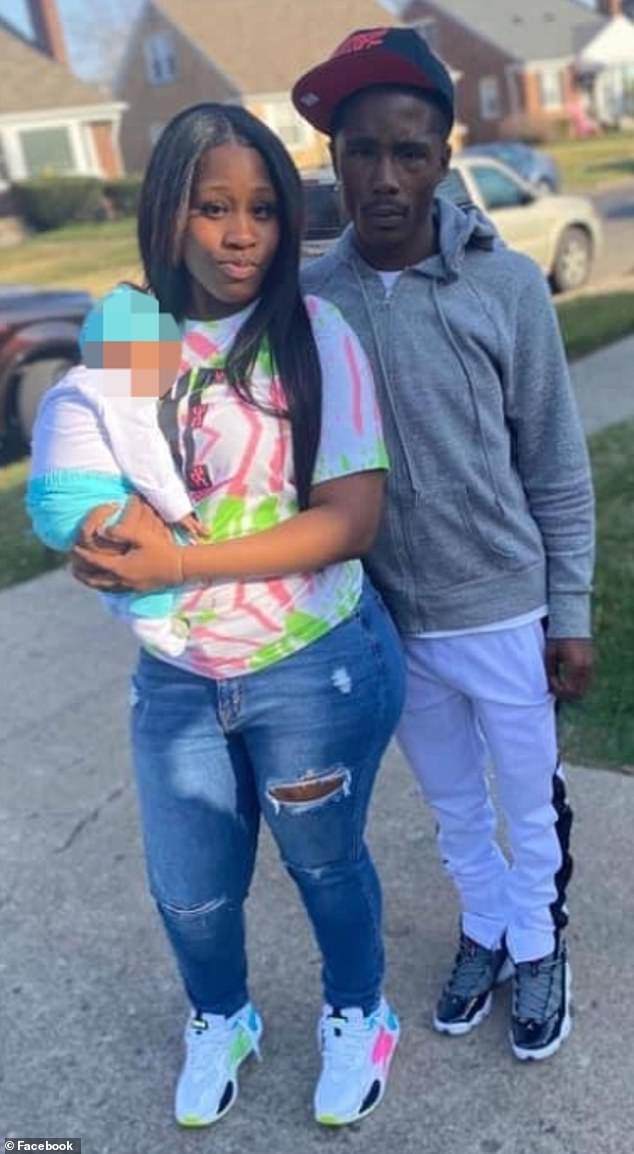 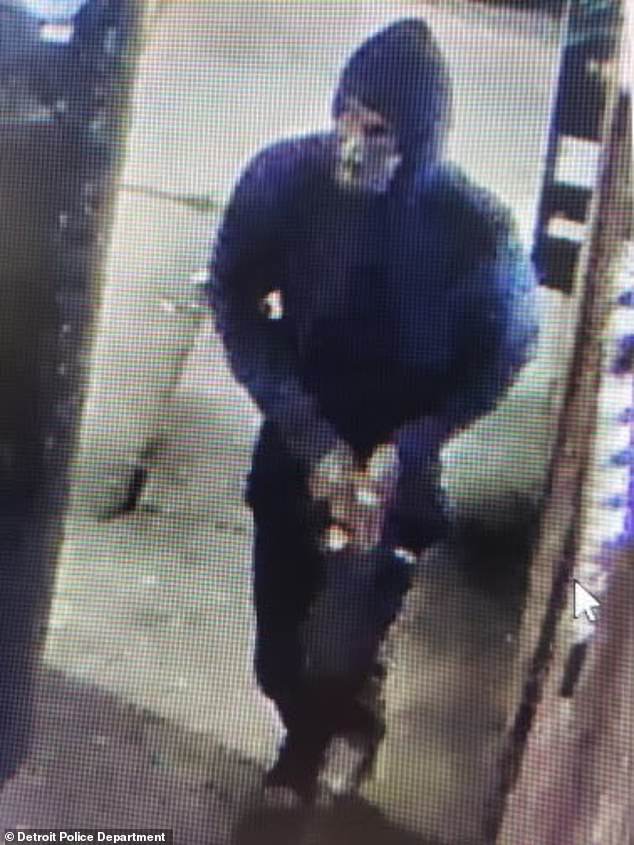 One of the gunmen (pictured) was seen wearing a blue sweatshirt and black sweatpants with a white stripe, as well as light-colored tennis shoes

Police did not have a motive behind the fatal shootings as of Wednesday.

Meanwhile, the second suspect was last seen wearing a blue sweatshirt and black sweatpants with a white stripe, as well as light-colored tennis shoes, McGinnis said.

‘The offenders came from the north … both of them were armed with handguns, guns in hand, (they) ran up to the vehicle, and fired shots into the vehicle,’ he added.

‘Both the subjects then fled northbound on Ashton Street, and from there unknown.’ 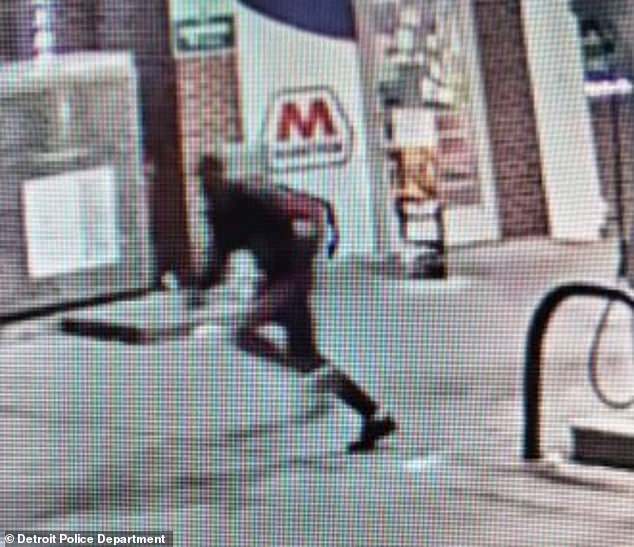 One of two suspects, pictured, wanted for the fatal ambush-style shooting of a Detroit couple in front of their infant daughter on Monday night 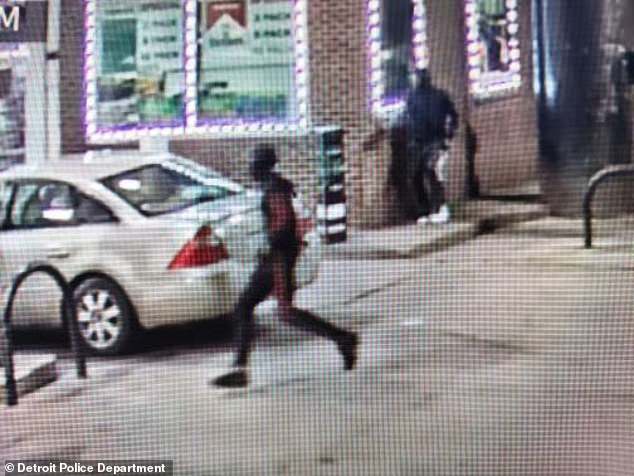 Video shows as the two gunmen run though the Marathon gas station parking lot, both armed with pistols, as they approach separate sides of the couple’s parked car before video cuts off 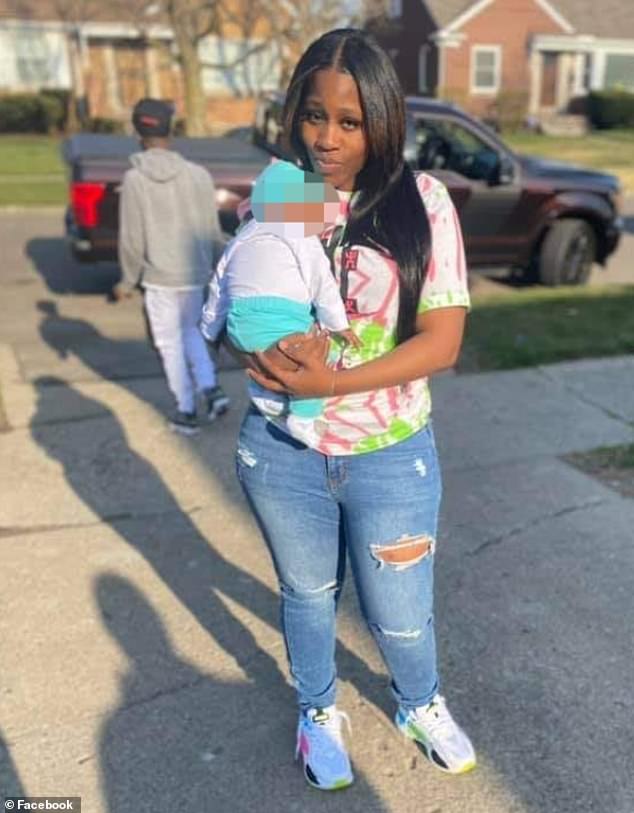 Pictured: Nash with their infant 9-month-old daughter, who was miraculously not injured as the child’s mother and father were shot to death in Detroit on Monday 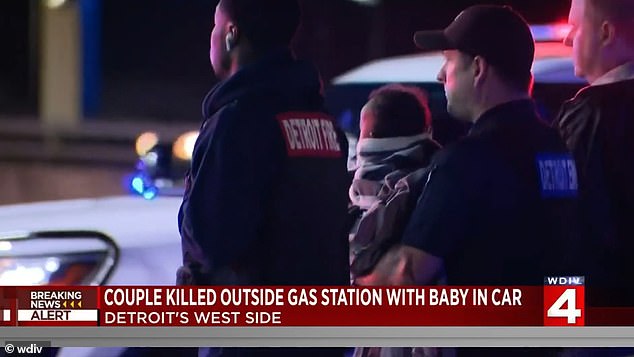 The couple’s infant daughter, pictured above immediately following the fatal shooting, was miraculously unhurt during the ambush 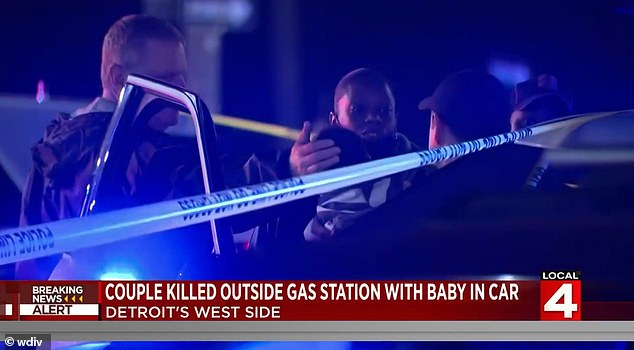 Pictured: child care workers with the State of Michigan released the young child to her grandmother after arriving at the scene Monday night

McGinnis said childcare workers with the State of Michigan released the young child to her grandmother after arriving at the scene Monday night, according to Detroit News.

Chief White, who is also is a licensed mental health counselor, told reporters during a press conference on Tuesday that the couple’s infant daughter will likely suffer trauma for the rest of her life after the deadly ambush-style killing of her parents.

‘You’re a kid growing up without your parents; that in and of itself is going to bring trauma to you,’ White said.

‘It’s just horrific. There are no words for it. I can’t imagine what the families are going through. You’ve got two families that have to bury two 22-year-olds.’

‘And you’ve got a 9-month-old who’ll have to be raised by her (grandmother), and who someday will be told the story about what happened,’ the chief said.

The police chief then implored anyone with information on the fatal shooting to come forward.

‘So think about that, and if you know anybody who did this, give us a call.’ 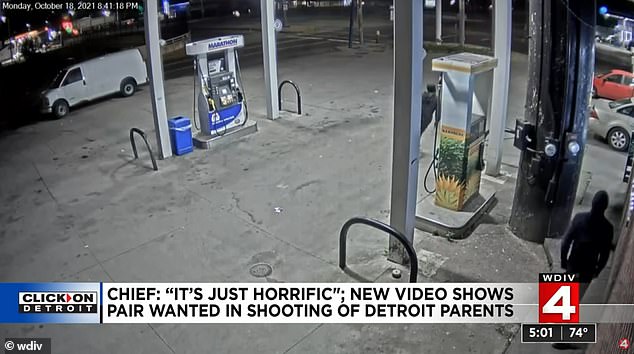 One of the suspects, pictured in bottom right corner, as he approaches the couple’s tan sedan just moments prior to the shooting 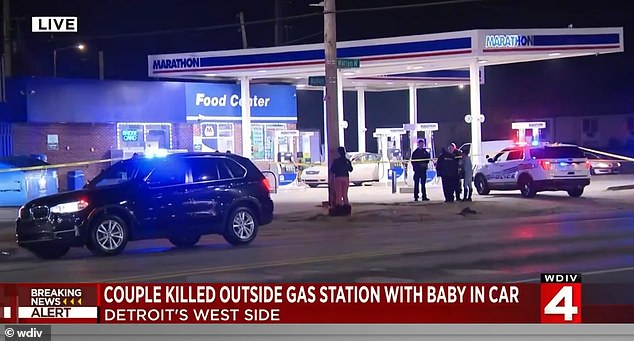 Authorities investigate the scene of Monday’s fatal shooting, which police said was a targeted hit 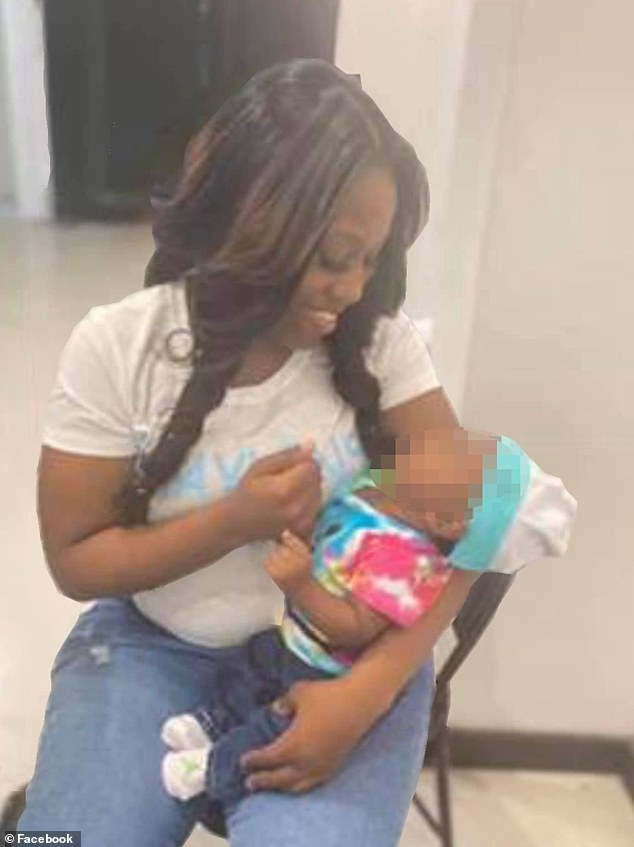 Nash and her daughter, who was not named by authorities, were in the vehicle at the time of the fatal ambush. Both Nash and the child’s father were killed in the shooting

According to White, the Marathon gas station where the murders took place is involved with Project Green Light, a program where local business owners install high-definition surveillance video cameras, along with better lighting, at their places of business.

Detroit News reports the video feeds are sent to the Detroit Police Real-Time Crime Center, a division of the department where both police offices and civilians track the hundreds of video feeds in the event a crime is committed on camera.

Detroit remains one of the most violent big cities in the country, according to FBI statistics, with murders rising 19.3 percent and aggravated assaults increased 21.7 percent from 2019 to 2020.

In 2020, the Motor City had a rate of 2,248.4 violent crimes per 100,000 residents – trailing only behind Memphis, Tennessee – as the highest rate in the country among cities with over 100,000 residents, the Detroit News reported late last month.

As of 2021, there is a one in 51 chance that a person will be the victim of a violent crime in the city, compared to a one in 229 chance in Michigan statewide, according to Neighborhood Scout.