Mike Pence is not ruling out the possibility of going head-to-head with his old boss Donald Trump in a 2024 Republican presidential primary, a new report suggested on Monday.

‘That’s the way Karen and I have always approached these things.’

The former vice president’s flirtations with a potential White House bid were rounded up and put under the microscope by the New York Times – including speaking appearances in battleground states like Iowa where he touts the ‘Trump-Pence Administration’s’ successes but then sets himself up against the ex-president with his endorsement in Georgia’s primary election.

Meanwhile Trump, despite not formally declaring a 2024 bid yet, has eyes on the competition – including Pence.

In a statement to DailyMail.com, his spokesman slammed his old deputy as ‘desperate’ and mocked him for trying to ‘chase’ his ‘lost relevance’ amid the former running mates’ latest divide over backing separate candidates in the Peach State’s gubernatorial election.

Speaking to the Times before an April speech in Iowa, Pence declared he was ‘incredibly proud of the record’ he and Trump had in office and said he and the ex-president spent ‘five years in the foxhole’ together.

But he also appeared to be signaling to GOP voters who were put off by Trump after last year’s Capitol riot.

‘I have been very moved traveling around the country how much people have made a point to express appreciation, it has been very humbling to me,’ he said about his refusal to go along with Trump’s plan to overturn the 2020 election.

For his part the ex-president has appeared to harden his tone against his former deputy, who he called a ‘good guy’ in a separate interview earlier this month.

‘Mike Pence was set to lose a governor’s race in 2016 before he was plucked up and his political career was salvaged,’ Trump spokesman Taylor Budowich told DailyMail.com.

Pence, who had been governor of Indiana and the No. 3 House Republican during his time in Congress, was chosen for the ticket in a bid to appeal to religious conservatives within the GOP. 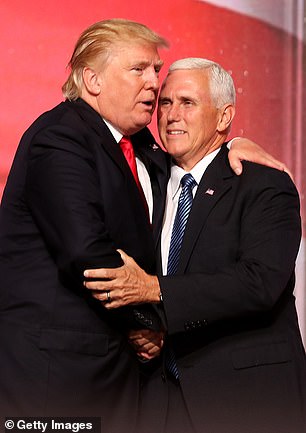 The spokesman continued: ‘Now, desperate to chase his lost relevance, Pence is parachuting into races, hoping someone is paying attention. The reality is, President Trump is already 82-3 with his endorsements, and there’s nothing stopping him from saving America in 2022 and beyond.’

Trump said of Pence on May 4, ‘I haven’t spoken to him in a long time, and he’s a nice man. He disappointed me on one thing because I think he should have sent the votes back to the legislatures.’

In Georgia, Trump has thrown his political weight behind former Senator David Perdue. Perdue was defeated by Democrat Senator Jon Ossoff in a runoff election just a day before the January 6 Capitol riot.

Perdue was also among the GOP lawmakers who supported Trump’s false claims the 2020 presidential election was stolen. Pence’s candidate is incumbent Governor Brian Kemp, who invoked Trump’s outrage by refusing to overturn his state’s election count.

Georgia, which elected its first Democrats to the Senate in more than two decades this past year, narrowly went to Biden in the 2020 election.

But whereas Perdue continues to trail Kemp in opinion polls ahead of their Tuesday primary, Trump has consistently stayed on top of prospective GOP voter surveys.

The ex-president leads opponents by double-digits in multiple polls.

In the most recent Conservative Political Action Conference straw poll, Florida’s Republican Governor Ron DeSantis comes in at a distant second but dominates in a scenario without Trump.

Pence comes in third and second in the respective polls.

However DeSantis has repeatedly refused to discuss his ambitions for higher office, insisting he is first and foremost interested in governing the Sunshine State – where he’s made a name for himself as one of the largest thorns in President Joe Biden’s side.

His fellow Republican governor, Chris Sununu of New Hampshire, doubted that popularity would aid him far outside of Florida.

‘I know there’s a lot of talk on Fox News and stuff like that on the national level or in Florida but there’s really not talk about him here in New Hampshire,’ Sununu, another potential 2024 contender, told the Times.

One new poll from over the weekend could upend that assertion, as well as months of early surveys.

Nearly 38 percent of respondents to a poll at a GOP convention in Wisconsin said they would back DeSantis in 2024.

Trump comes in a close second with 32 percent of the vote.