Polls closed in Pennsylvania Tuesday after a dramatic primary season that pit former President Donald Trump against some of his closest political allies and featured the Senate Democratic favorite spending election day in surgery.

On the Democratic side, Lt. Gov. John Fetterman held about 50 per cent of the vote over rivals Rep. Conor Lamb and state Rep. Malcolm Kenyatta 15 minutes after polls closed.

On Friday the 52-year-old Fetterman suffered a stroke, and had a pacemaker implanted on Tuesday, hours after he voted in the election by absentee ballot from Lancaster General Hospital.

Pennsylvania’s Attorney General Josh Shapiro, running unopposed for the Democratic nomination for governor, was called the winner of his race as soon as polls closed.

Shapiro announced that he has COVID-19 and thus won’t likely make an election night appearance. 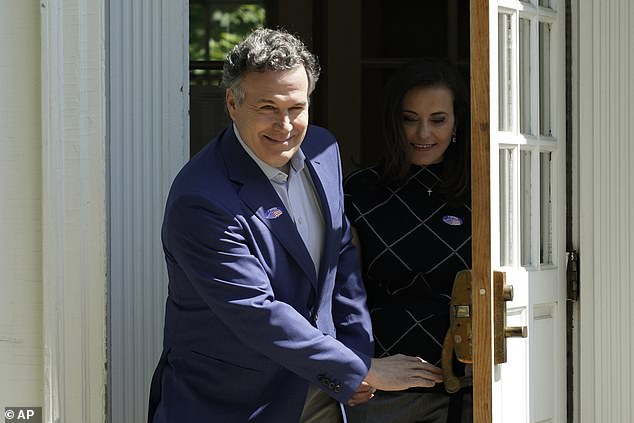 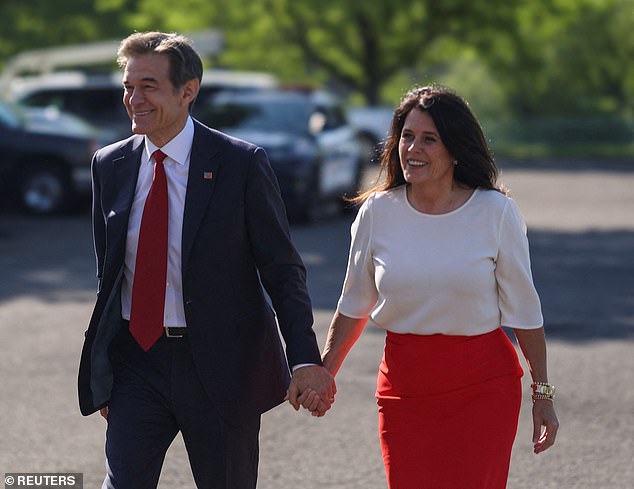 Pennsylvania Republican Senate candidate Dr. Mehmet Oz and his wife Lisa Oz arrive to cast their vote, in Bryn Athyn, Pennsylvania, on Tuesday with the GOP primary set to go down to the wire 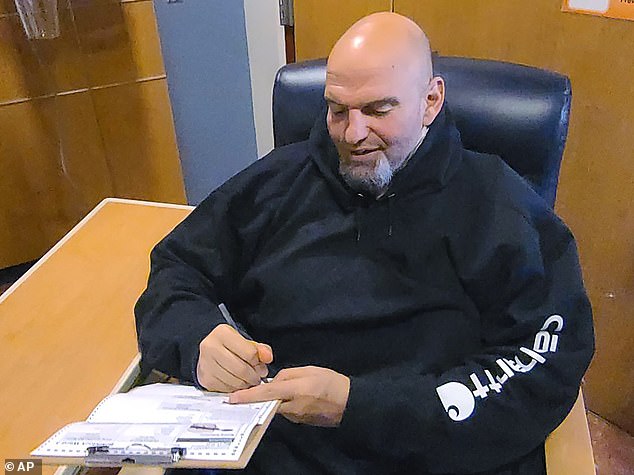 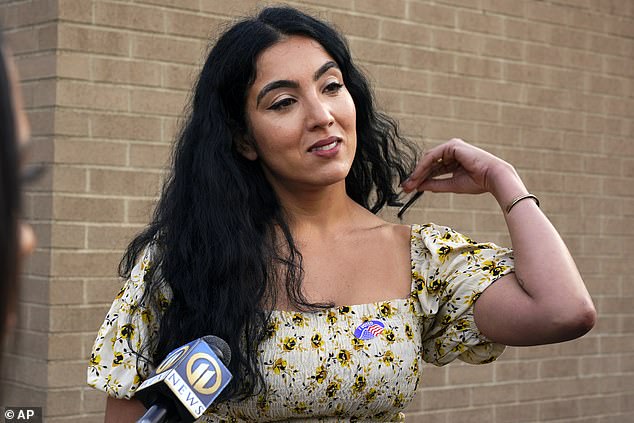 Gisele Fetterman, stumping for her husband while he remained hospitalized, talked to reporters outside her Braddock, Pennsylvania polling place on Tuesday

The race to replace retiring Republican Sen. Pat Toomey looked very different early on, with Trump wading in early and endorsing Sean Parnell, who tried to unseat Lamb in a Congressional race in 2020.

Less than three months later, Parnell was out, after a judge in the Republican’s child custody case found abuse claims made by his estranged wife to be credible.

In the months following, a number of Trump White House figures played adviser – official and unofficial – to McCormick, the former CEO of Bridgewater Associates who had been considered for several administration positions during the ex-president’s tenure

But in April, Trump threw his weight behind Oz arguing that the TV doctor would ‘be the one most able to win the General Election,’ arguing that Oz could pull votes away from Democrats in Pennsylvania’s left-leaning cities of Pittsburgh and Philadelphia.

‘It’s like Donald Trump’s staff is sabotaging Trump by convincing him to make the worse possible endorsements,’ conservative pundit Erick Erickson complained on Twitter directly after the ex-president announced Oz as his pick.

As primary election day neared, Pennsylvania Republicans showed fresh interest in Barnette, a far-right candidate who said she was part of the pro-life movement because she was a byproduct at rape, arguing during a debate, ‘I’m still not just a lump of cells, my life has value.’

‘I am so very grateful that our nation is having a very important conversation about life. I am the byproduct of a rape. My mother was 11-years-old when I was conceived, my father was twenty-one,’ Barnette said, using the anecdote to launch an attack on Oz, who previously shared pro-choice views.

An Emerson poll released Monday had Oz at 32 per cent, Barnette at 27 per cent and McCormick at 26 per cent.

Trump was pushing for Oz until the end.

Politico reported Monday that Trump recorded a call that went out to Pennsylvania voters knocking McCormick for being soft on China and hammering Barnette for wanting to erect a statue of former Democratic President Barack Obama, a Trump nemesis.

Politifact rated claims about Barnette wanting to erect a statue of Obama ‘mostly true,’ as she pushed for statues of the Obama family and Frederick Douglass to be added to the Emancipation Memorial – which shows President Abraham Lincoln standing over a slave – which was targeted for removal during the 2020 wave of racial justice protests in the aftermath of the death of George Floyd. 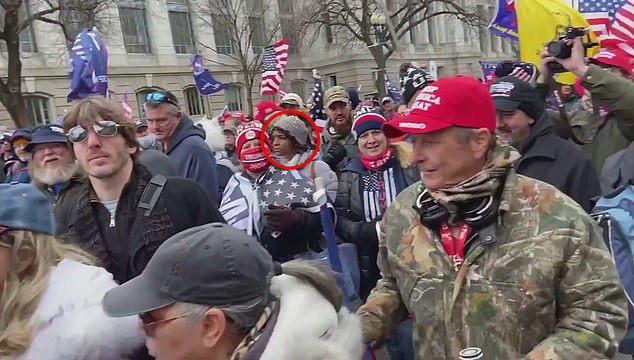 On Monday, NBC News reported on a newly surfaced photograph that appeared to show Kathy Barnette (circled) marching toward the U.S. Capitol Building on January 6 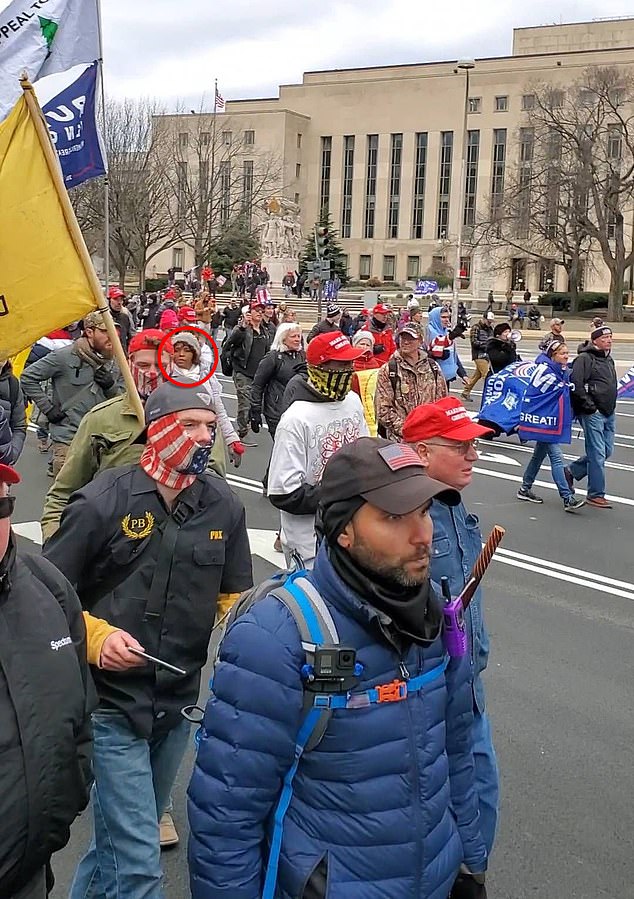 Another image that reportedly shows Republican Senate hopeful Kathy Barnette (circled) marching toward the U.S. Capitol Building with members of the Proud Boys and other Trump supporters on January 6

Barnette, who is black, said she never supported or voted for Obama, but explained that the slave in the controversial statue would be ‘looking into the future of where this nation will be’ by facing an additional statue of the Obama family.

Republicans aligned with her rivals have also pointed to problematic statements Barnette has made about Muslims and homosexuality.

Additionally on Monday, Barnette was identified in a newly surfaced photograph marching toward the Capitol Building on January 6.

Barnette’s team denied she took part in or condoned any violent behavior in comments to NBC.

‘Kathy was in DC to support President Trump and demand election accountability. Any assertion that she participated in or supported the destruction of property is intentionally false. She has no connection whatsoever to the proud boys,’ her staff said in a statement. 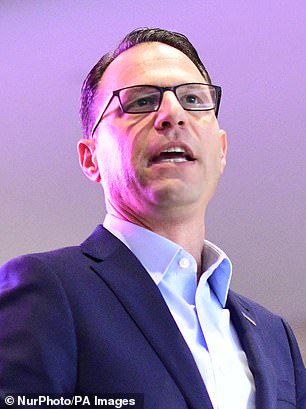 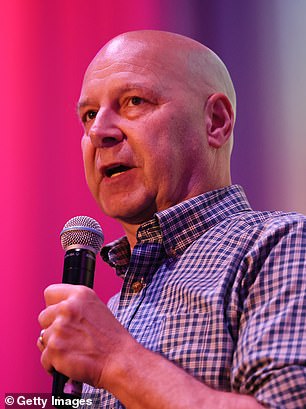 Democrat Josh Shapiro, Pennsylvania’s attorney general, won the primary unopposed in the Democratic gubernatorial primary, while Republicans state Sen. Doug Mastriano (right) has been leading in the polls and locked down Trump’s endorsement on Saturday

On Saturday, Trump officially endorsed GOP gubernatorial hopeful Mastriano, who was also in Washington on January 6.

‘There is no one in Pennsylvania who has done more, or fought harder, for Election Integrity than State Senator Doug Mastriano,’ Trump wrote. ‘He has revealed the Deceit, Corruption, and outright Theft of the 2020 Presidential Election, and will do something about it.’

Mastriano, a state senator and retired U.S. Army colonel,  was one of the loudest voices echoing Trump’s false claims of losing the 2020 election due to widespread voter fraud – including in the Keystone State, which Trump won in 2016 only to lose to President Joe Biden four years later.

Mastriano was about even in polling with former Rep. Lou Barletta, also seeking to replace the term-limited Democratic Gov. Tom Wolf, until mid-April and then he began to surge.

With an 18-point lead over Barletta in this week’s Emerson poll, Trump’s stamp of approval all but assures Mastriano takes the nomination.

But beyond embracing the so-called ‘big lie’ and being present in D.C. on January 6, Mastriano said he didn’t believe there should be any exceptions for women seeking abortions, even in cases of rape, incest or potential death.

Some Pennsylvania Republicans are worried that Mastriano’s positions are too extreme for the swing state.

And on the Democratic side of his race, Attorney General Josh Shapiro is running for governor unopposed. 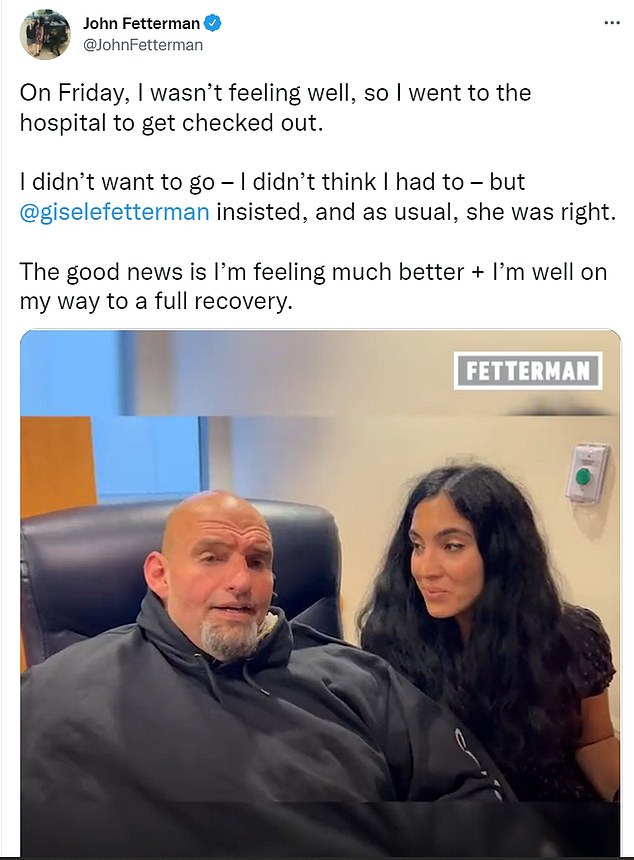 Democratic Pennsylvania Senate hopeful, Lt. Gov. John Fetterman, said Sunday that he suffered a stroke on Friday, just days before voters head to the polls. His campaign also said Monday that he would remain hospitalized through election day 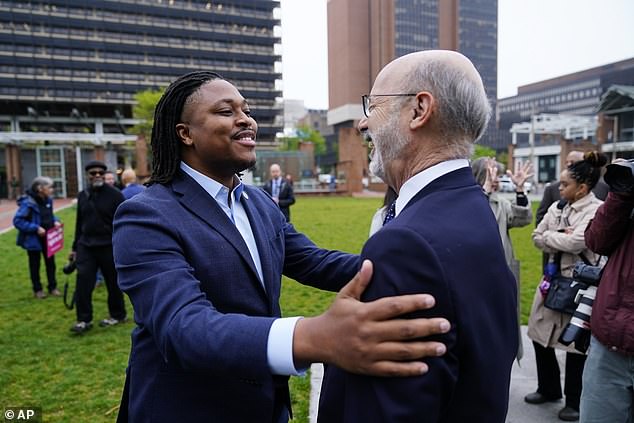 National Democrats believe that the party’s best chance to flip a Republican Senate seat is likely in Pennsylvania.

The Democratic primary is pitting two Pittsburgh-area Democrats against one who represents part of Philadelphia.

Fetterman, who’s been the state’s lieutenant governor since 2019, was formerly the mayor of Braddock, a steel town that hugs the Monongahela River just outside of Pittsburgh.

The six-foot-nine inch politician is known for wearing gym shorts, supported Bernie Sanders’ campaign and regularly trolls Republicans at Pennsylvania’s capitol in Harrisburg by flying rainbow and marijuana flags outside his office displaying his support for LGBTQ+ rights and more liberal drug policies.

A Franklin & Marshall poll from late April showed Fetterman a comfortable 39 points ahead of Lamb, who’s also from the Pittsburgh area. 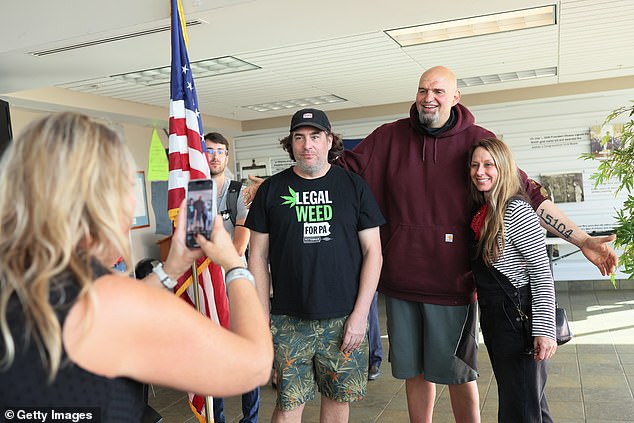 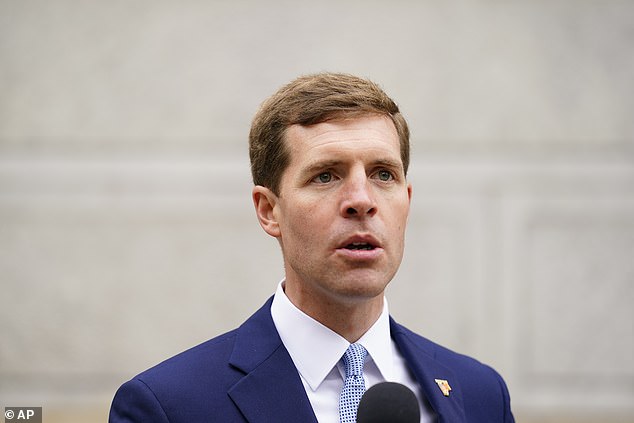 Rep. Conor Lamb, who like Fetterman is from the Pittsburgh area, has argued that he’s a Democrat who can win in Trump-friendly areas, as he did in his partially rural district in a special election against a Trump-backed Republican in 2018

Lamb has promoted himself as a candidate who can win in a year when Democrats expect a shellacking – pointing to his March 2018 special election win in a partially rural district hugging Pittsburgh over a Trump-aligned Republican.

It’s unclear if Fetterman’s eleventh hour admission that he had a stroke will impact the race.

In a statement released Sunday, Fetterman said that doctors told him ‘I didn’t suffer any cognitive damage’ from the stroke.

‘I’m well on my way to a full recovery,’ he noted.

But on Monday his campaign said that he wouldn’t be at his election night event, with his wife Gisele – who’s been a dynamic presence on the campaign trail – slated to speak instead.

In the Republican primaries so far, Trump has a mixed record.

But last Tuesday, Trump’s pick for Nebraska governor, Charles Herbster, lost the Republican primary to Jim Pillen, a hog farmer and University of Nebraska Regent who had the support of the state’s outgoing Republican Gov. Pete Ricketts.

Herbster had been plagued with serial groping allegations from at least eight women in the run-up to election day, with Trump backing him anyway.

Rep. Alexander Mooney easily beat Rep. David McKinley in a race that pit two sitting congressman against each other due to West Virginia losing a House seat in reapportionment.

Mooney had Trump’s support, while McKinley was endorsed by the state’s Republican Gov. Jim Justice.

On Tuesday night, Trump’s potency will also be on the ballot in North Carolina, as the scandal-plagued but Trump-backed Rep. Madison Cawthorn fights off a primary challenge. 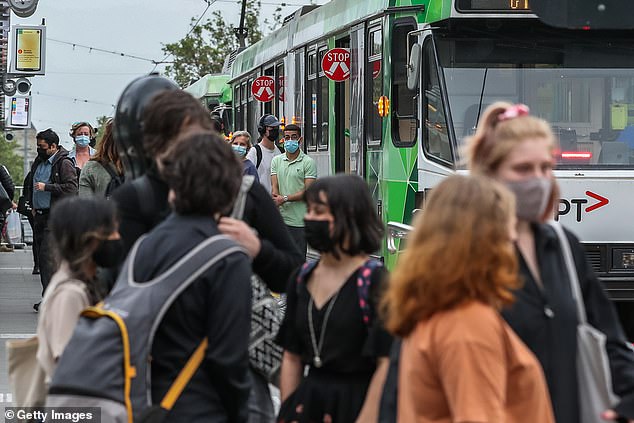 Advertisement Victoria’s Covid cases remain under 1,000 for the fourth day in a row – as NSW records 231 new infections Victoria recorded 996 new COVID-19 cases and nine people have died with virus Wednesday was the fourth straight day Victoria’s case numbers are below 1000  New South Wales recorded 231 Covid cases, there were… 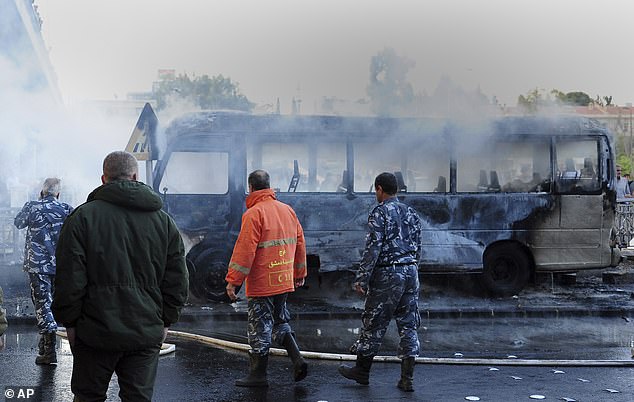 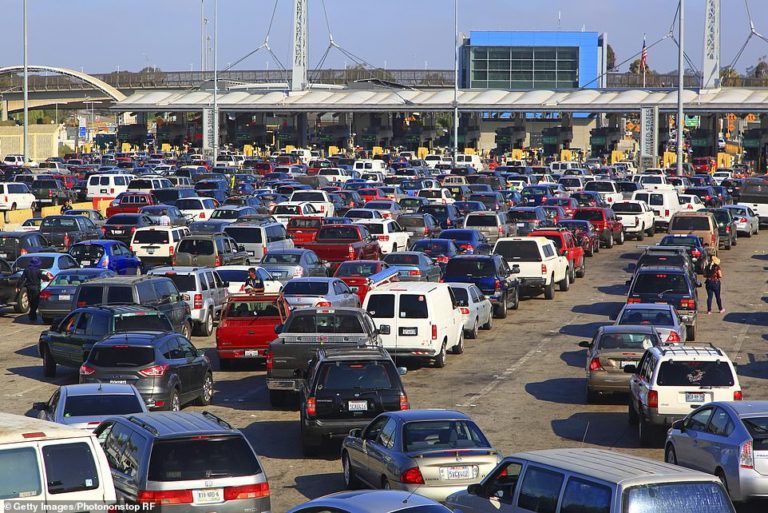 Advertisement Thousands of Californians are fleeing to Mexico amid the soaring cost of living in the golden state. Americans taking advantage of work from home are reaping the benefits of US salaries, while living off Mexico’s cheaper lifestyle. Advertisement Others are living in Mexico, while commuting to work in the US. But critics have argued… 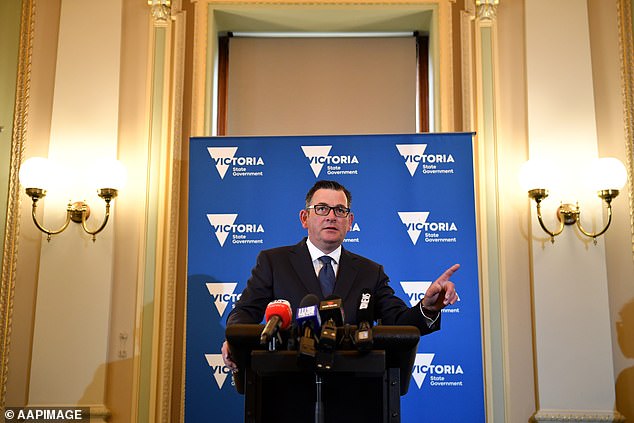 Advertisement Six Covid-19 lockdowns, nearly as many ministers gone, a corruption scandal, sustained civil unrest and a debilitating fall down slippery stairs – the Andrews government’s second term has not been short of drama. Advertisement Despite this, the Labor government is on track to win the next election in a year’s time. A Roy Morgan… 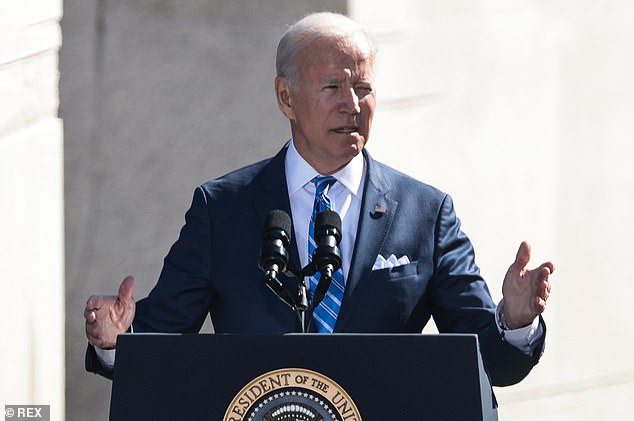 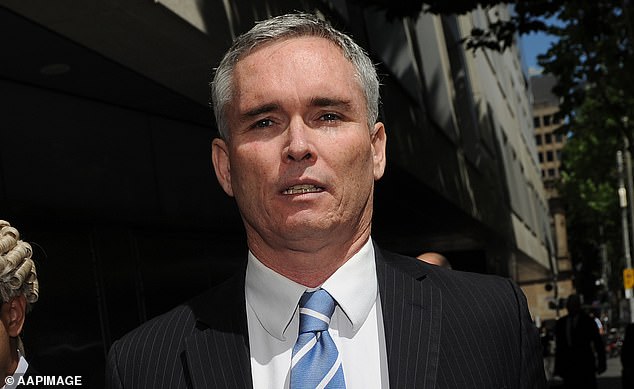