The president was caught on hot mic proclaiming that ‘no one f***s with a Biden’ during his trip to Florida Wednesday where he put on a united front with Ron DeSantis, who he called ‘guv.’

After surveying the storm damage from Hurricane Ian in Florida, President Joe Biden delivered remarks alongside the state’s Republican governor where the two put aside their rivalry for the day as they stood face-to-face for the first time and shook hands.

Following the remarks in Fort Myers, Florida, a microphone picked up Biden telling the town’s Mayor Ray Murphy that ‘you can’t argue with your brothers outside the house.’

The context of the conversation is not immediately clear, other than Murphy thanking the president for visiting his devastated town and telling Biden he was ‘God d***n right’ to say ‘no one f***s’ with him.

The nation’s first lady Jill Biden and Florida’s first lady Casey DeSantis joined their husbands for the public display of solidarity on Wednesday.

The Florida couple greeted the Bidens as they stepped out of their motorcade to receive a briefing from state and local officials on what is needed to successfully recover from the damage from the category 4 storm, which left more than 100 people dead and hundreds of thousands displaced.

After speaking several times on the phone, including a call before the storm made landfall, Biden and DeSantis put their partnership in hurricane recovery to the test with their first in-person meeting. 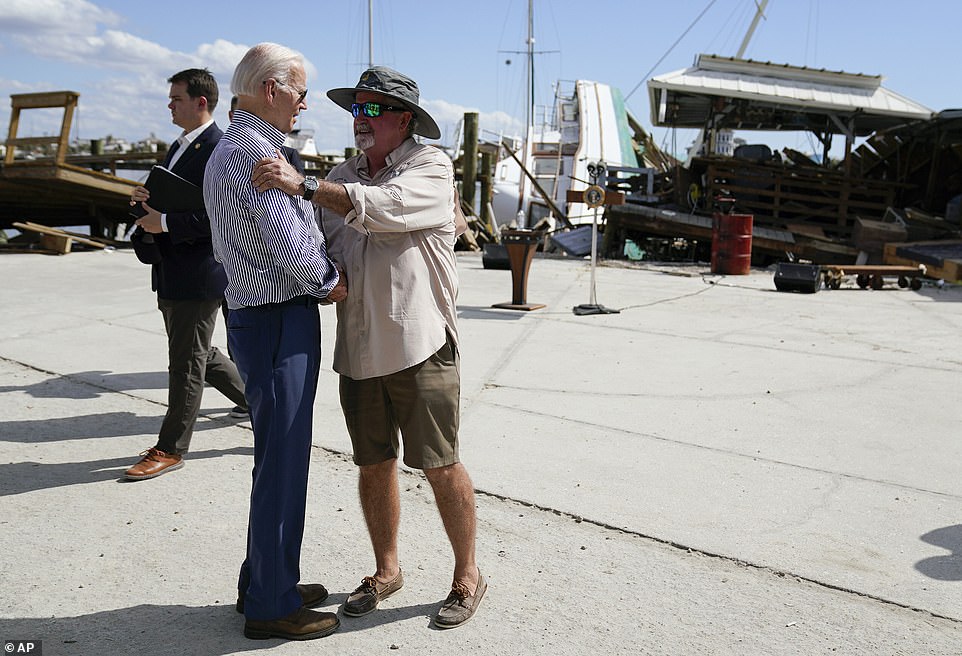 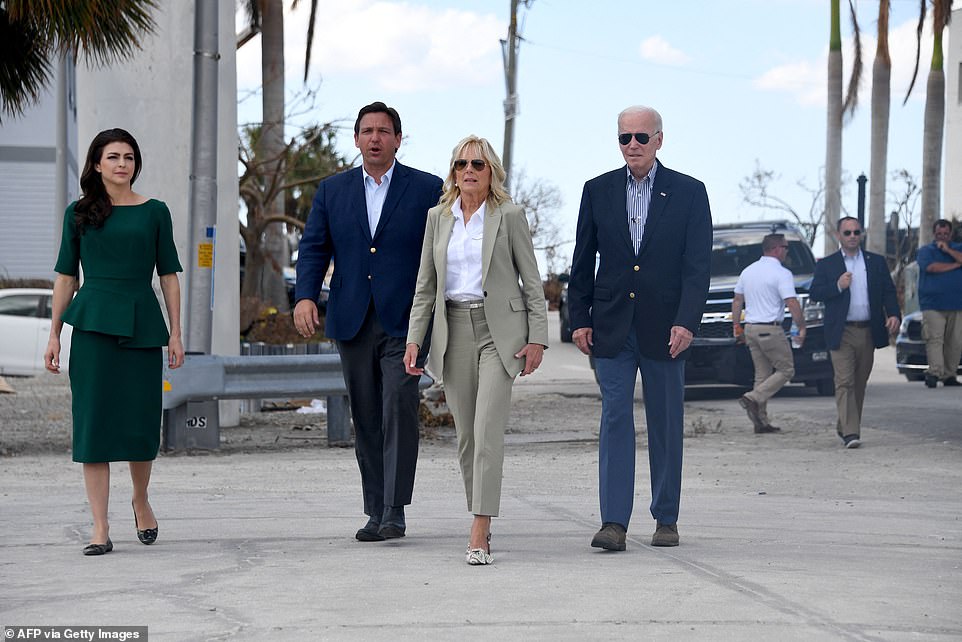 Biden and DeSantis got through their remarks Wednesday without any obvious insults at the opposing sides, but with a few veiled swipes, including on the issue of climate change.

The president got almost chummy with DeSantis at one point, referring to him as ‘guv’ when he took to the microphone for remarks touting how well they worked together to respond to the storm’s devastation despite hurling insults at one another every other day.

The White House and DeSantis’ administration have publicly shot down suggestions that they aren’t working together in their response to the storm’s carnage and have even sent veiled compliments towards each other. 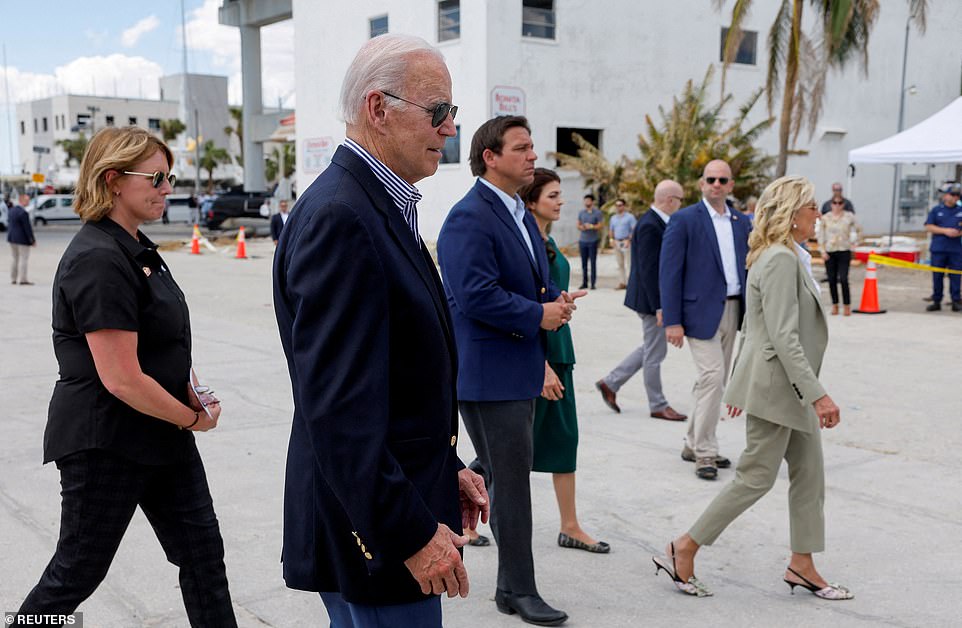 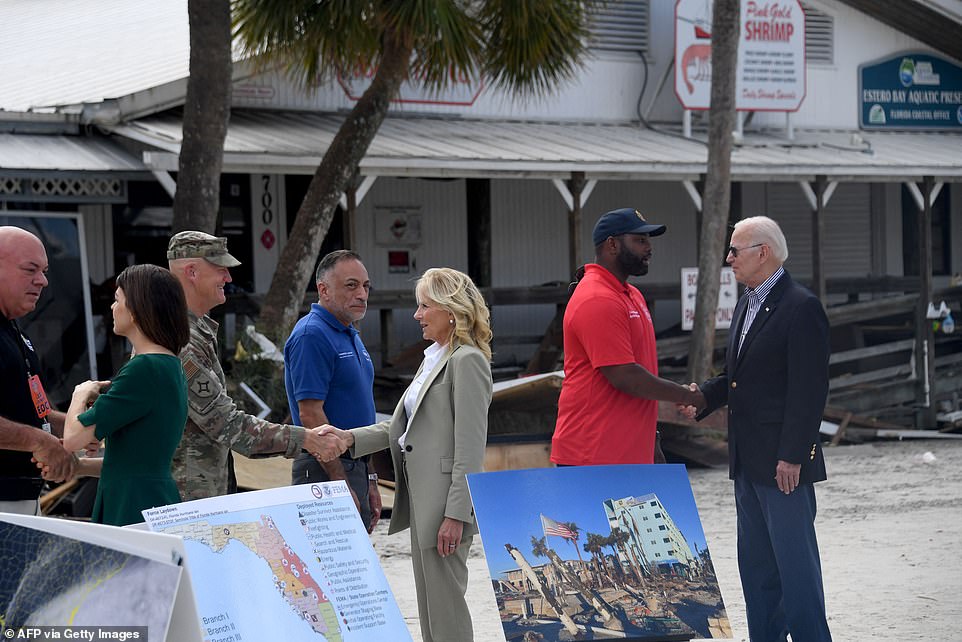 The Bidens heard from community leaders and local residents who were impacted by the storm with a stop at Fishermans Pass in Fort Myers, Florida on Wednesday, October 5. They were shown images and maps depicting the path and damage incurred from the storm

DeSantis thanked the Biden administration during remarks in front of the president for covering 100 percent of the cost of ‘debris removal and emergency protective measures’ in the 60 days following the first day the storm hit the state.

‘Mr. President, welcome to Florida. We appreciate working together across various levels of government,’ DeSantis said in introducing Biden.

‘Well, Guv and the first lady, thank you very much for the hospitality,’ Biden said in a friendly tone when taking the microphone and going into the devastation he saw during his helicopter tour of the wreckage.

Biden said that affected individuals could be eligible to receive nearly $80,000 for home repairs and auto replacements and repairs. He also urged Floridians to register twitch the government to find out if they are eligible for the aid.

He used his time at the microphone to promote environmentalist views that the level of climate disasters in recent years are exacerbated by climate change – a hit at Republicans who have shot down this proposed correlation.

During an update earlier on Wednesday morning, he said that Florida was ‘fortunate’ the White House signed off on the emergency declaration before Hurricane Ian became a tropical storm – and said that he ‘appreciated that quick action.’

DeSantis said during an update earlier on Wednesday morning that Florida was ‘fortunate’ the White House signed off on the emergency declaration before Hurricane Ian became a tropical storm – and said that he ‘appreciated that quick action.’

As of Tuesday, 109 people were reported dead from the hurricane – the deadliest since 1935. Around 318,000 homes and businesses are still without power as of Wednesday morning, which is a week after Hurricane Ian hit landfall in Florida. 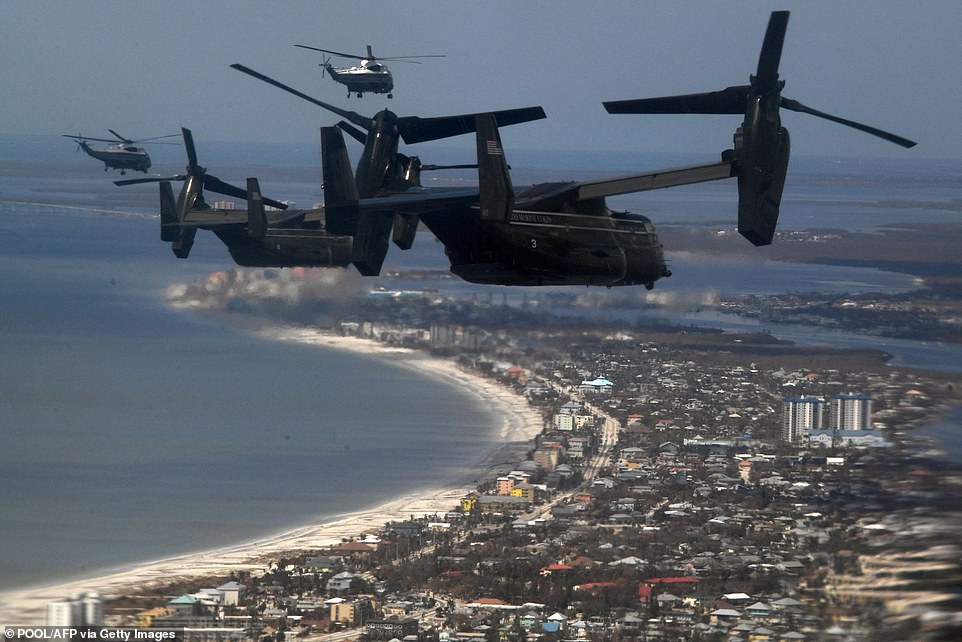 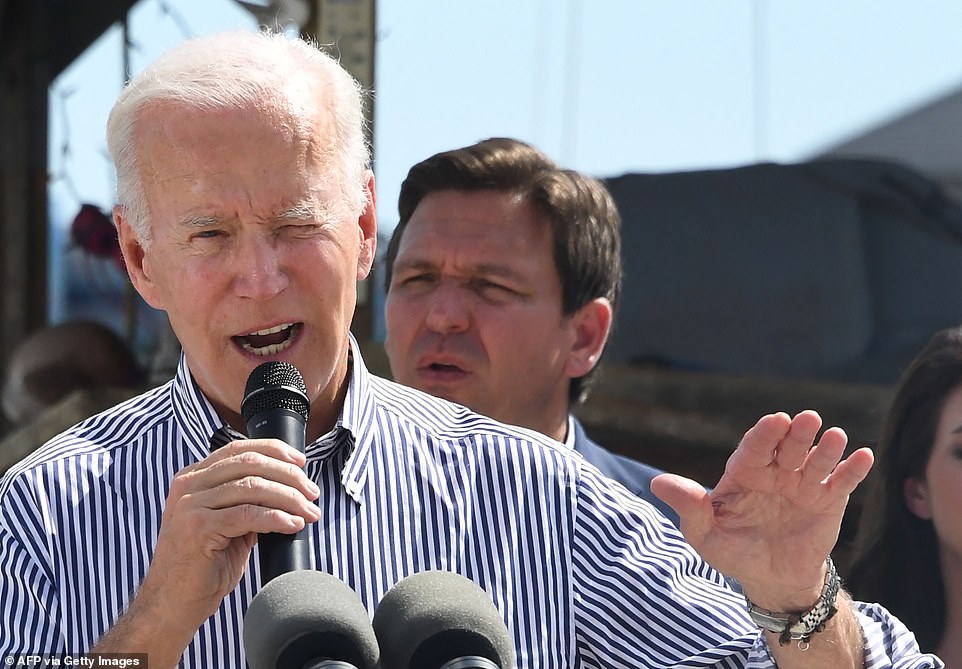 Biden appeared to get a little chummy with DeSantis, calling him ‘gov’ at the start of his remarks on Wednesday thanking the Republican governor for welcoming him to Florida 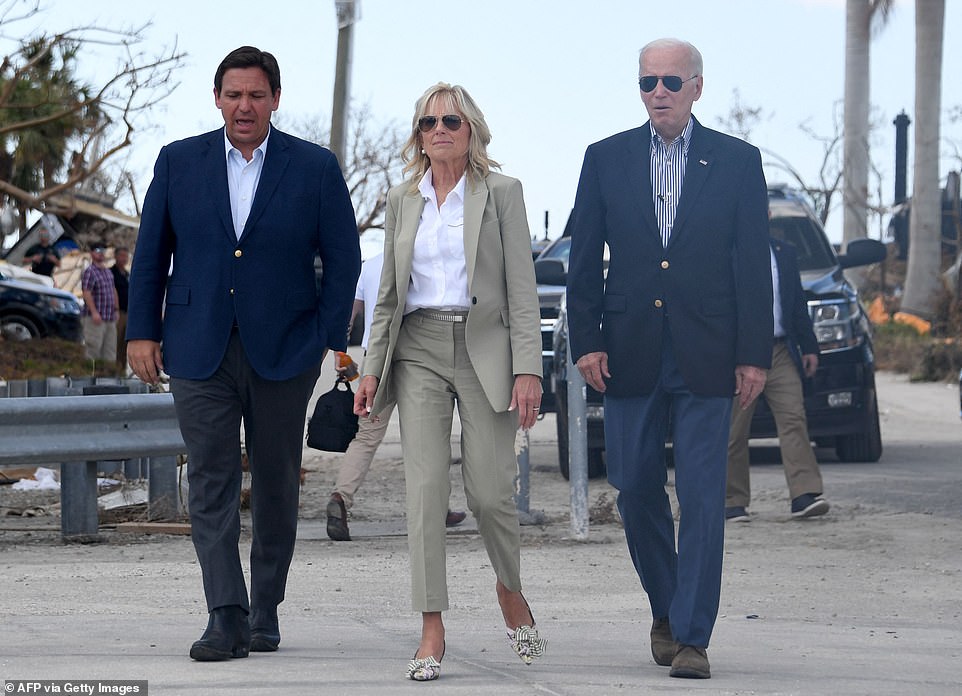 Biden’s first trip to the Sunshine State this year turned into a show of unity between the Democratic administration and the Republican Florida leadership as they continue a front of working hand-in-hand in hurricane recovery. Pictured: Gov. DeSantis speaks to the president and first lady as they walk to meet with local residents impacted by the storm on Wednesday

Biden left the White House Wednesday morning to fly to DeSantis’ jurisdiction, where he will take an aerial survey of the storm’s damage in Fort Myers, Florida and speak with local and state officials, including the governor and Senator Rick Scott, another staunch critic.

Before the storm hit, Biden was scheduled to visit Orlando and Fort Lauderdale last week to promote the strengthening of Social Security and Medicaid.

He previously accused Scott of wanting to end both programs by proposing that federal laws should expire every five years, although the Florida senator has said he wants to preserve the programs.

Biden and DeSantis have also had a multitude of differences in recent years over a myriad of issues, including how to fight COVID-19 as well as education and immigration policy.

In recent weeks, the two have publicly tussled over DeSantis’ decision to put migrants on planes or buses to Democratic cities.

Hurricane Ian, however, changed the purpose and tone of Biden’s first trip to Florida this year – becoming a moment for bipartisan cooperation. 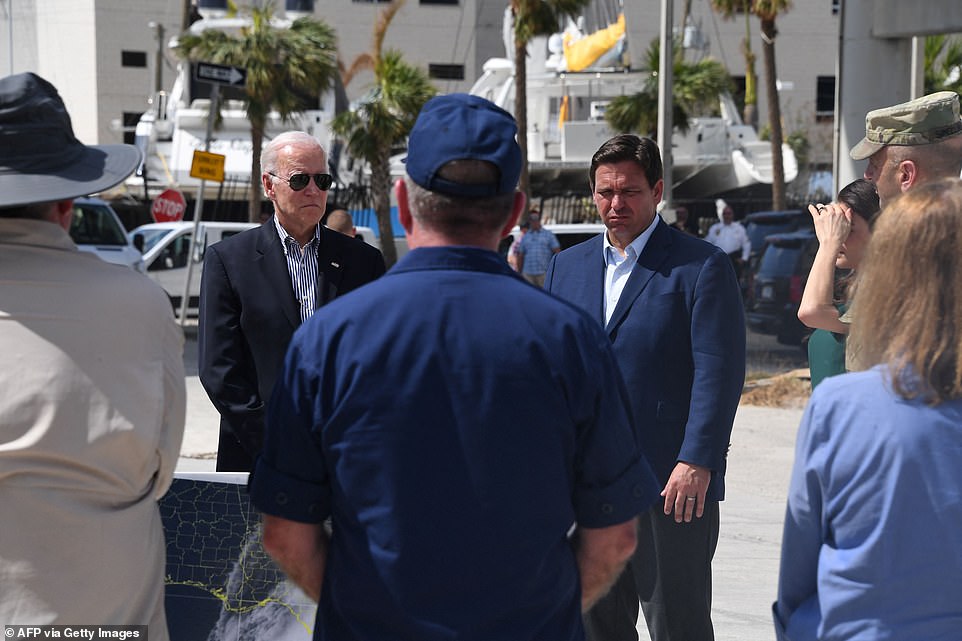 DeSantis has emerged as a potential alternative GOP presidential candidate in 2024 as more and more moderate Republican voters turn away from the ultra-MAGA ideals. While President Biden hasn’t made any official announcement, he has repeated that he has every intention of running for reelection.

All eyes turned to the Sunshine State Wednesday for a potential clash between the Democratic president and GOP governor, who may go head-to-head in 2024.

‘There will be plenty of time, plenty of time, to discuss differences between the president and the governor – but now is not the time,’ White House Press Secretary Karine Jean-Pierre said during her Tuesday briefing.

She told reporters: ‘When it comes to delivering and making sure that the people of Florida have what they need, especially after Hurricane Ian, we are one. We are working as one.’ 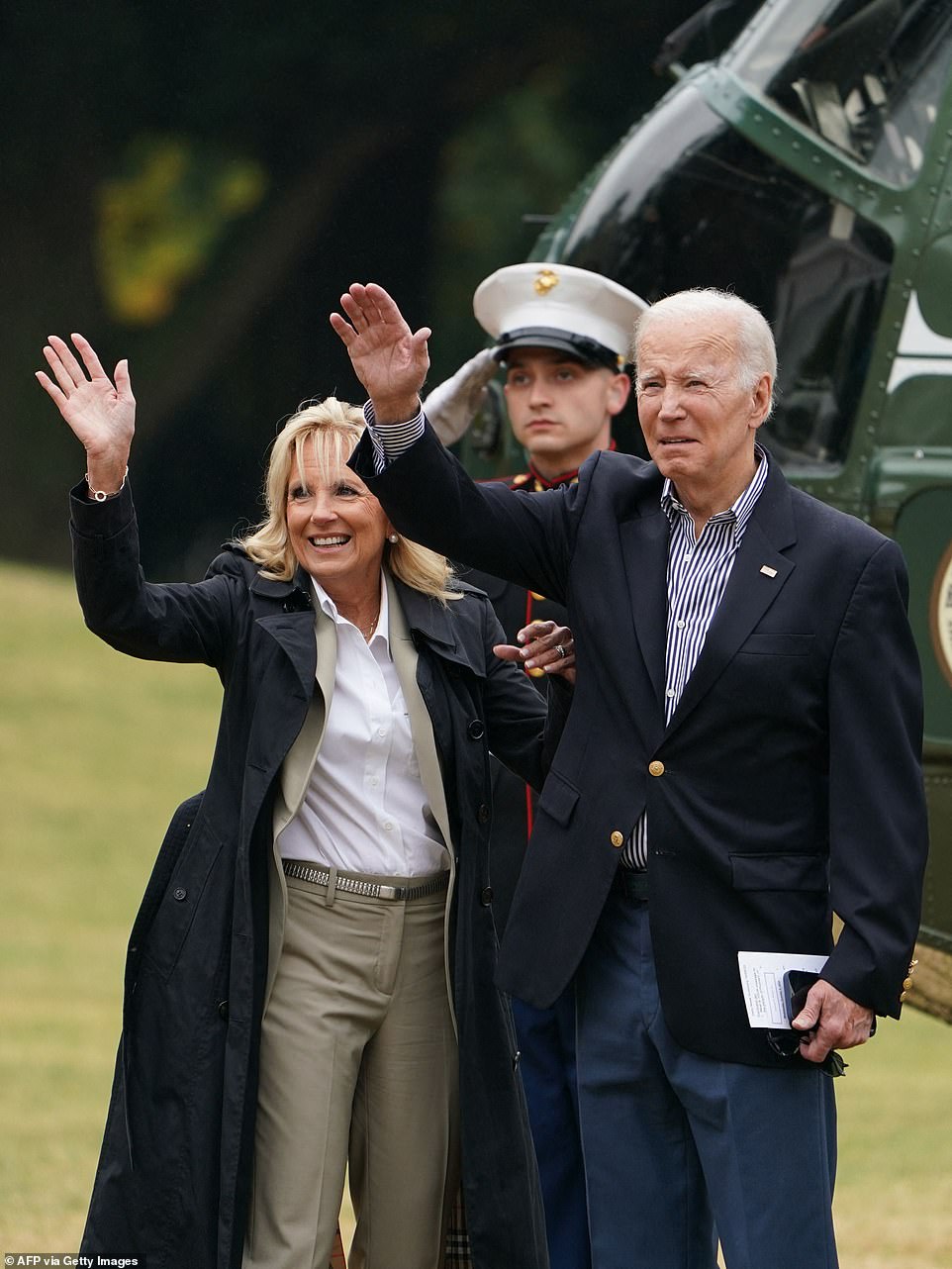 Joe and Jill Biden wave to guests as they depart the White House to travel to Florida earlier on Wednesday, October 5 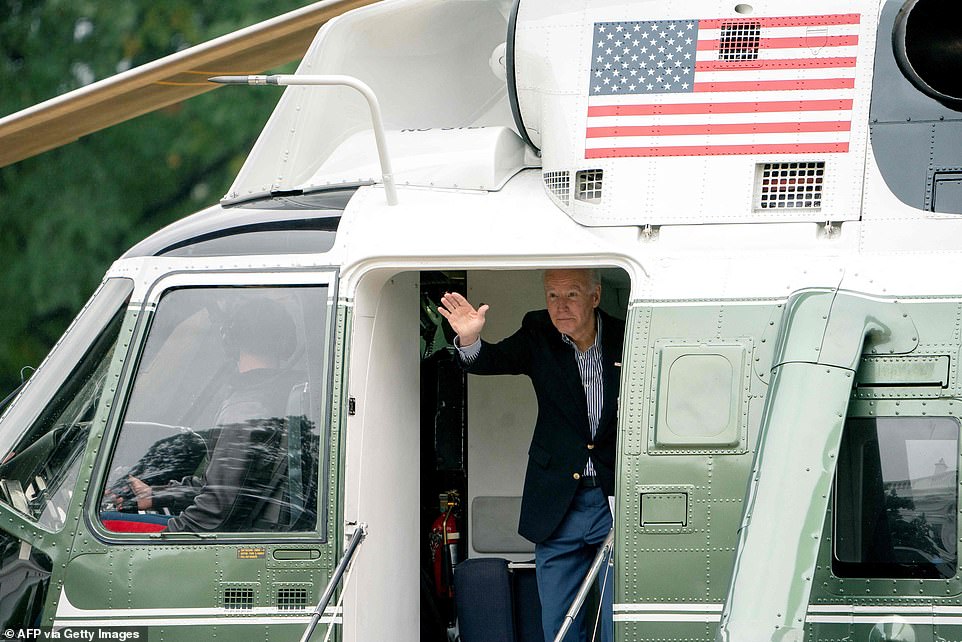 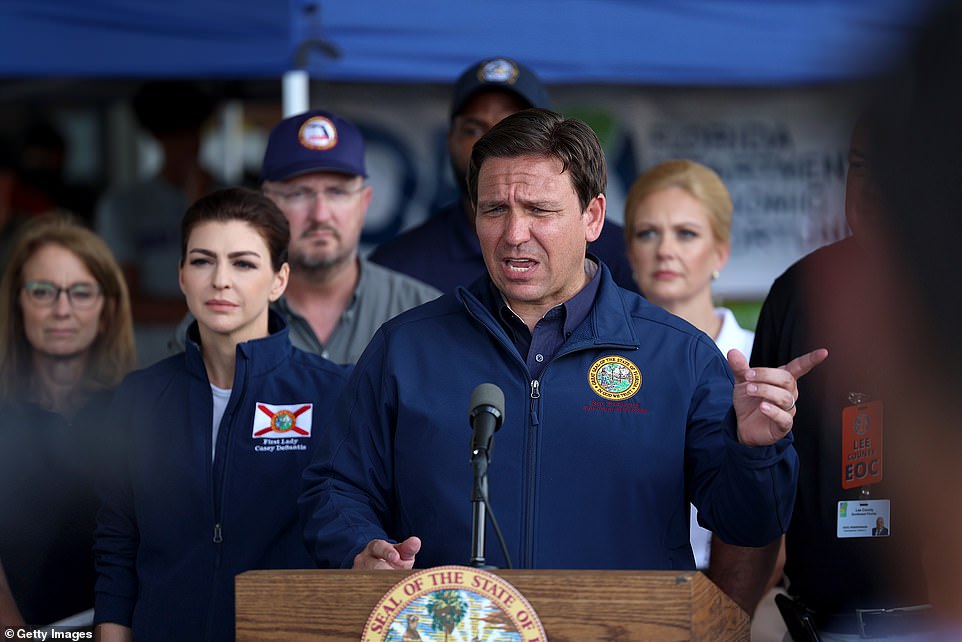 The duo held several phone calls related to the category 4 hurricane ravaging the state last week. Pictured: Governor DeSantis and his wife Casey (left) provide an update on the ongoing efforts in the aftermath of Hurricane Ian on Tuesday, October 4

While speaking to reporters on Air Force One en route to Florida on Wednesday, Criswell said ‘there are communities that have to be completely rebuilt.’

‘We’re going to have to bring in the full federal family,’ she added.

The president announced Wednesday that the federal government will cover 100 percent of the costs incurred by ‘debris removal and emergency protective measures’ in Florida for 60 days after the day of the initial incident.

This is an extension of the previous 30-day assistance period announced last month when the hurricane hit.

‘I think he’s going to have to come back and ask for more than those 60 days,’ Biden said of DeSantis’ cooperation in the matter, claiming that after they spoke, they decided the clean-up might take longer than two months.

The storm caused an estimated $60 billion in damage and thousands were left homeless.

It also knocked out power to more than 4 million homes and businesses in Florida and over 1.1 million in North and South Carolina. 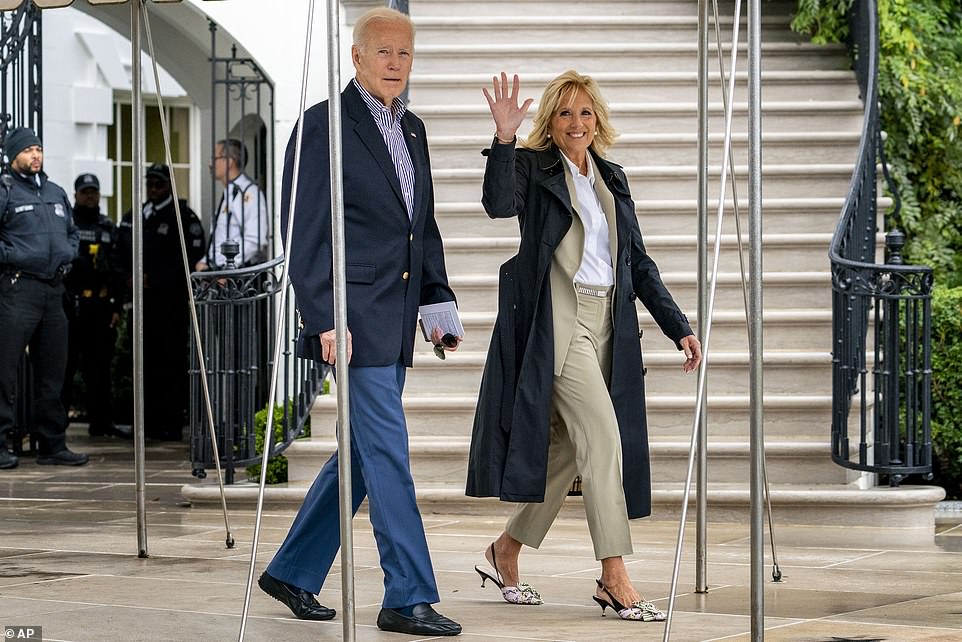 The first couple departs the White House en route to Joint Base Andrews, where they will fly to Fort Myers, Florida where they president will survey the damage from the hurricane by helicopter 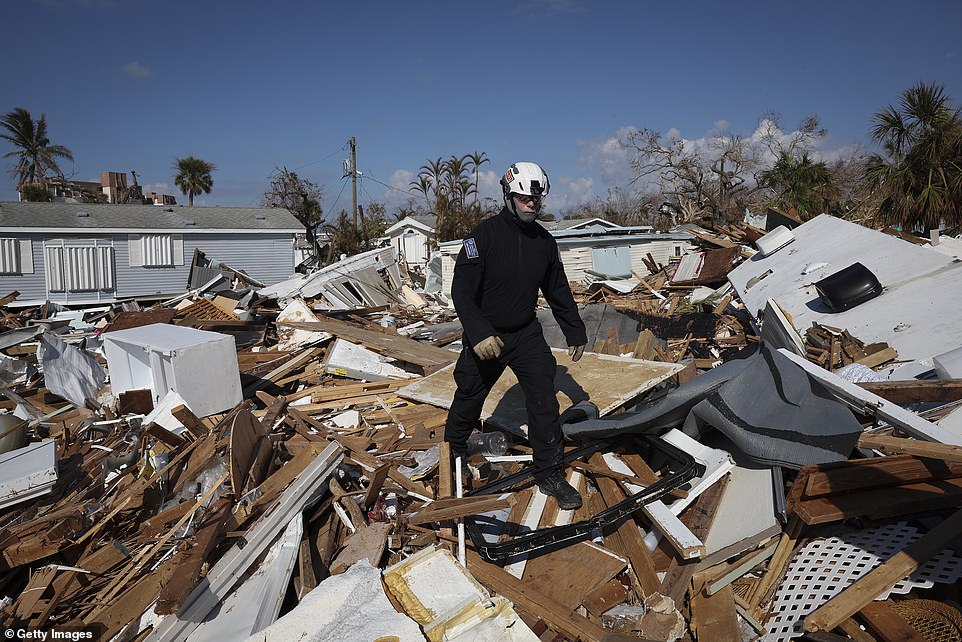 Hundreds of thousands of homes and businesses are still without power nearly a week after the hurricane made landfall in Florida. A search a rescue team member looks through the carnage on Fort Myers Beach looking for victims 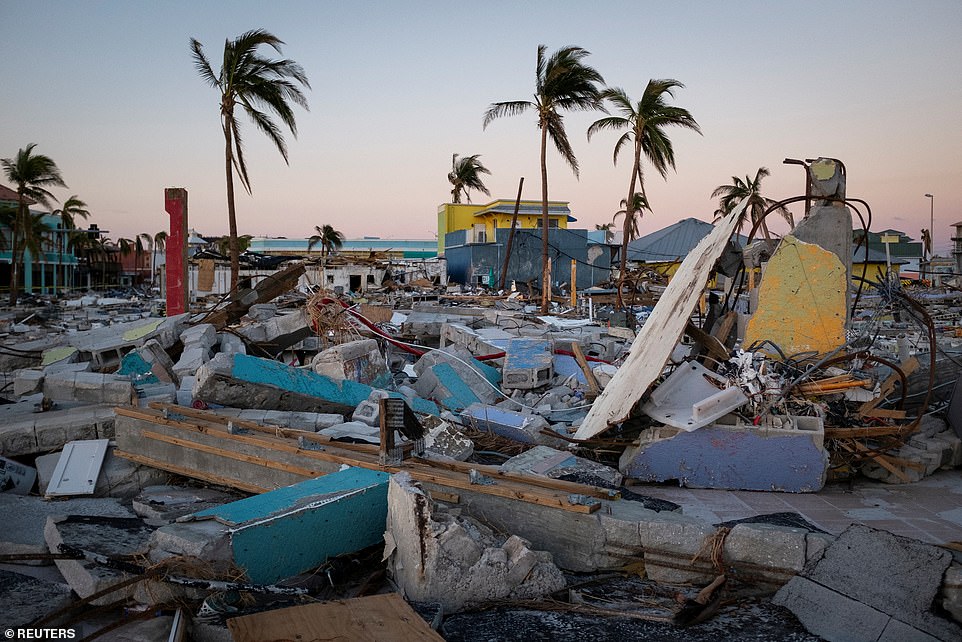 Restaurants, shops and other businesses were destroyed in the hurricane on Fort Myers Beach, Florida

Partisanship when it comes to federal aid for states has broken down in recent years between the White House and governors of the opposing party.Santis in 2022.

DeSantis, whose style of politics focuses on attacking far-left policies, doesn’t have to worry about Biden’s visit ruining his GOP clout and popularity.

While he will embrace federal aid for Florida, it’s unlikely there will be any literal embraces.

The president and the governor, during their phone conversations, have complimented each other in a rare moment of bipartisanship in a highly divided time in U.S. politics – especially with less than five weeks until the midterm elections.

DeSantis revealed during a storm response update on Tuesday that three of the four looting suspects arrested in Lee County are in the U.S. illegally.

The Florida governor focused on ‘law and order’ and drew a connection between the looting and Biden’s immigration policies.

‘These are people that are foreigners, they’re illegally in our country, but not only that, they try to loot and ransack in the aftermath of a natural disaster,’ DeSantis explained.

‘They should be prosecuted, but they need to be sent back to their home country. They should not be here at all,’ he continued. 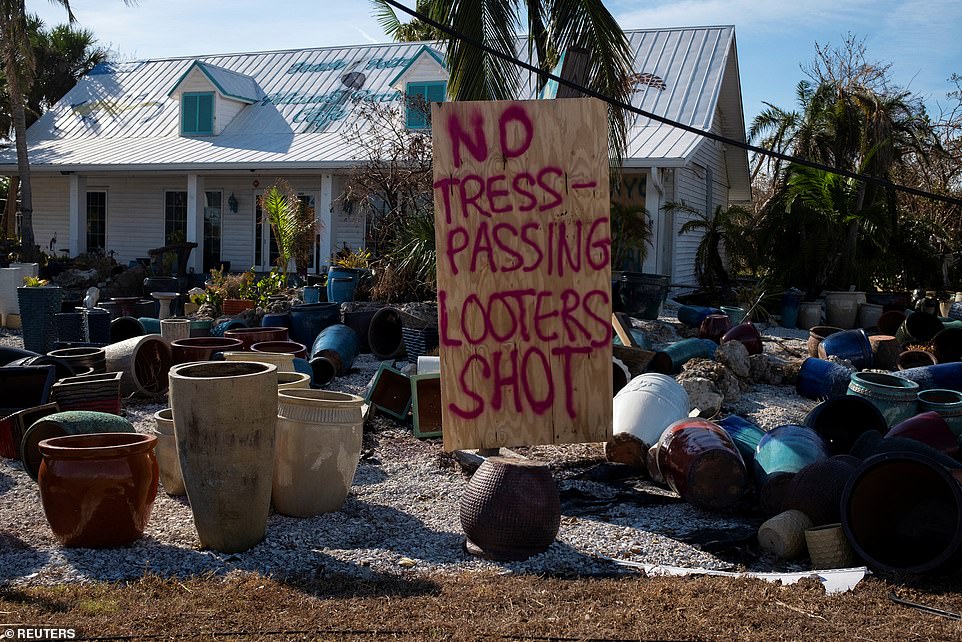 A no trespassing sign warns looters that they will be shot outside a shop in Fort Myers Beach, Florida after Hurricane Ian caused widespread destruction

The looting ensued in the aftermath of Hurricane Ian.

The four men were arrested on charges of burglary of an unoccupied structure during a state of emergency, according to online jail records.

The individuals, aged between 20 and 33, were booked for ransacking devastated homes and businesses on Fort Myers Beach while they suffered in the wake of the raging torrent.

All four looters were arrested on September 29 – but documents reveal that they were released after posting $35,000 bonds each.