Prince Harry and Meghan Markle will be in New York City next Monday with the prince set to address the United Nations.

The speech, as part of Nelson Mandela Day, will see the Duke of Sussex speak in front of an informal General Assembly gathering at the UN.

A UN spokesman told DailyMail.com: ‘The South African Mission has confirmed the participation of the Duke and the Duchess at Monday’s commemoration.’

His speech may refer to the impact of climate change and world hunger, reports say.

This year’s Nelson Mandela Day tagline is: ‘Do what you can, with what you have, where you are.’

The duo are said to have been keen to honor Mandela since visiting his widow Graça Machel in 2019.

Machel said to the couple at the time: ‘It’s wonderful meeting you. I’m sure we’re going to be working together in the future. I can feel the vibe.’

The couple appeared at the last UN General Assembly in September 2021. During that visit, the couple didn’t participate in the speeches in the assembly hall.

It would be the first public appearance since last month’s Queen’s Platinum Jubilee celebrations. The couple kept a low profile at the event. 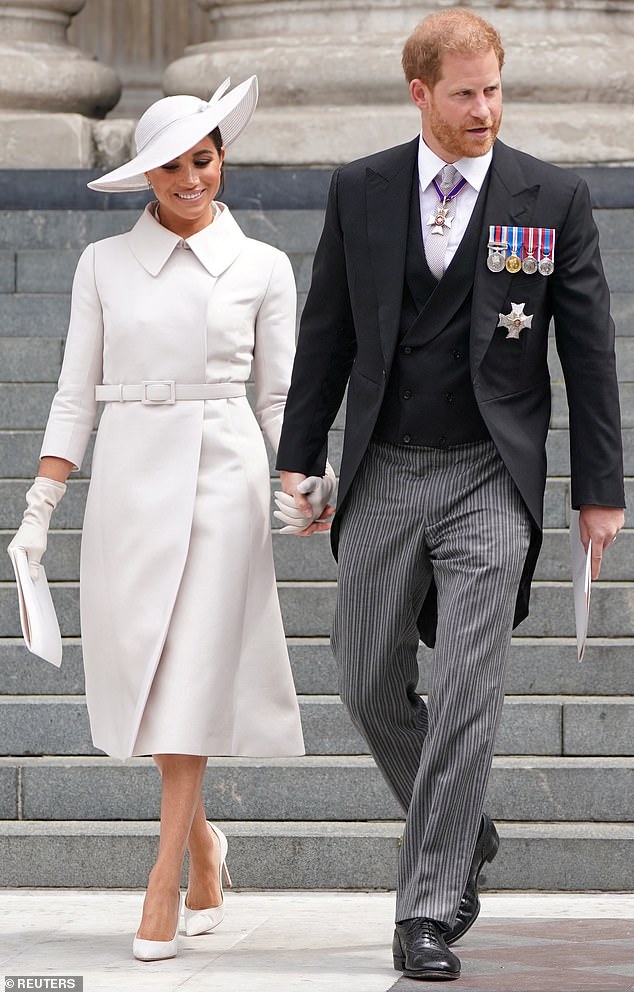 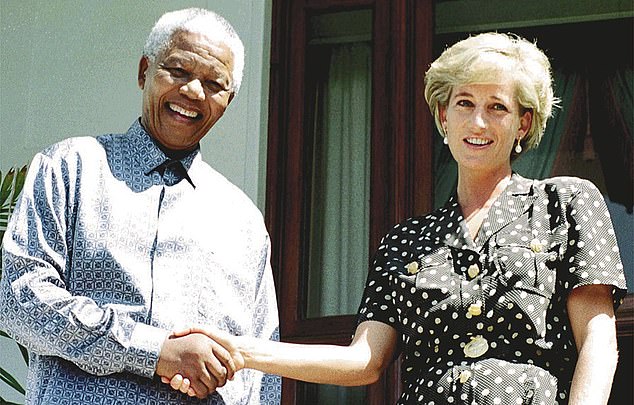 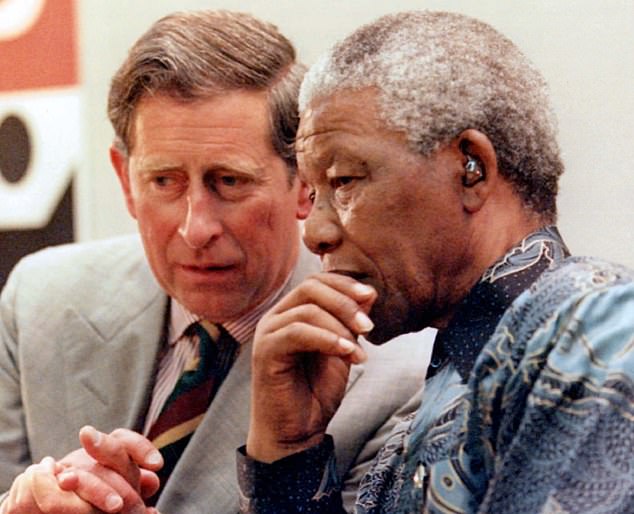 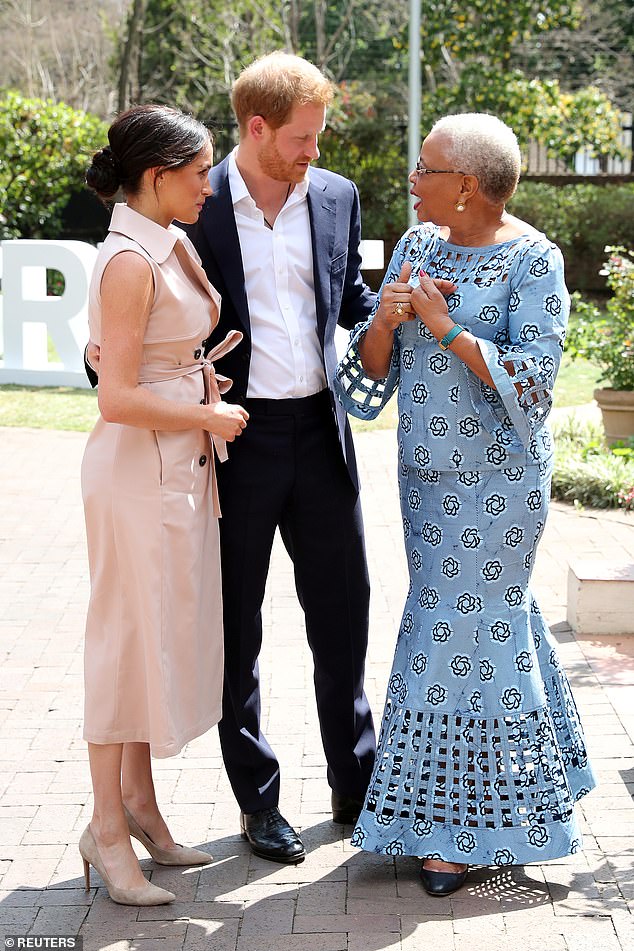 In 2019, the couple shared a Nelson Mandela quote on their Instagram page, writing in the caption: ‘Sharing a powerful quote to start the week.’

The quote reads: ‘It is so easy to break and destroy. The heroes are those who make peace and build.’

While in the Rainbow Nation in 2015, Prince Harry visited Mandela’s former prison cell in Robben Island.

In their 2019 trip to the country, Prince Harry and Meghan also met with Mandela’s  grand-daughter Zamaswazi Dlamini-Mandela and the late South African leader’s cellmate Andrew Mlangeni.

When Harry’s mother met with Mandela in 1997, he said of Lady Diana’s efforts to help those with AIDS: ‘We saw her sitting on the beds of AIDS patients and shaking hands with them, and that changed perceptions dramatically with regards to AIDS.’

While Diana said that she was ‘absolutely thrilled’ to meet Mandela.

Mandela went on to say that he ‘trembled’ at the thought of meeting Diana adding: ‘I didn’t know that I would meet a British princess.’

A reporter asked him if he would kiss her, Mandela responded by saying: That would be treason.’

Diana’s brother, Earl Spencer, was a resident of Cape Town at the time of the meeting and moved back to the United Kingdom in the aftermath of her death. 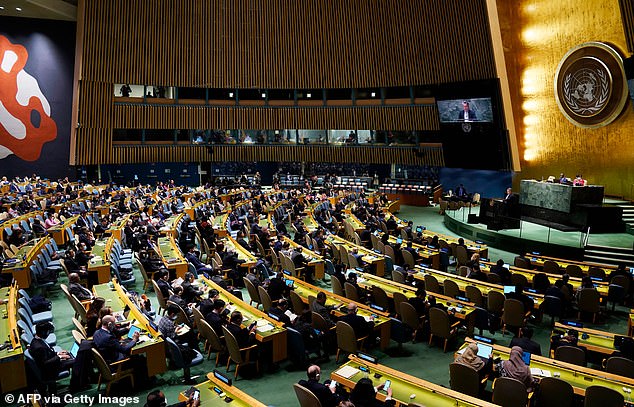 This year will see the 77th meeting of the United Nations General Assembly. The first was held in London in 1945

Nelson Mandela Day has been celebrated by the United Nations since 2009.

According to the United Nations website, the public is invited to mark the day by making a difference in their community.

The blurb reads: ‘Everyone has the ability and the responsibility to change the world for the better! Mandela Day is an occasion for all to take action and inspire change.’

In 2014, the assembly established the Nelson Mandela Price, an award for those who have dedicated their lives to the service of humanity.

The UN speech comes amid reports that the prince’s controversial tell-all memoir may be delayed until next year after it failed to appear on a list of upcoming book release.

Sources suggested that the omission of the Duke’s ‘heartfelt’ book from the latest Penguin Random House listings meant that it might not be published this autumn, as previously expected.

A Royal insider told The Sun on Sunday: ‘If this book’s coming out this year as originally planned it should be in the publisher’s marketing and promotional list — unless they’re planning a surprise or there’s been a delay.

‘Its omission has raised lots of eyebrows in royal circles.’

It followed rumors in May that the ‘intimate’ book could be delayed as an exact release date remained elusive.

That suggests either the book will have a surprise release – or it won’t be on shelves in 2022.

Last year it was revealed that Harry had signed a deal with publisher Penguin Random House.

He has reportedly been working with a ghost-writer, the novelist John Moehringer.

Harry had said he was writing ‘not as the prince I was born but as the man I have become’, revealing he wanted to include ‘the highs and lows, the mistakes, the lessons learned’.

A spokesperson for Penguin Random House’s subsidiary publisher Transworld said: ‘We don’t put every book on the list so there is nothing to be extrapolated from that.’ 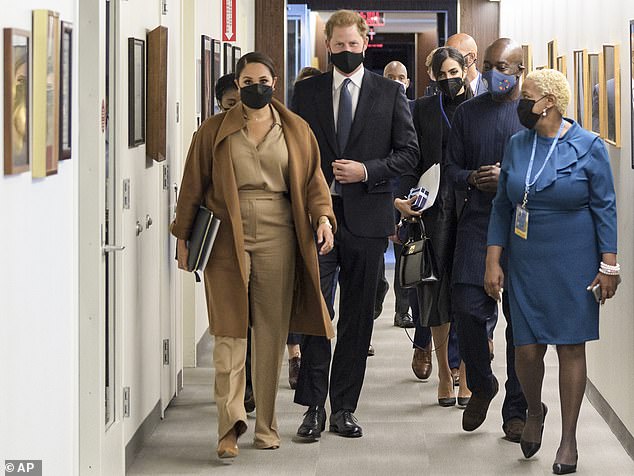 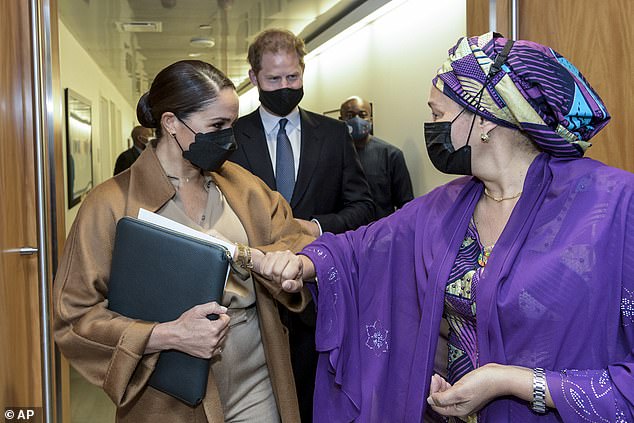 In September 2021, Prince Harry and Meghan met with a top UN official amid the United Nations General Assembly.

The royals came to UN headquarters to speak with Deputy Secretary-General Amina Mohammed. All three appeared later that day at the Global Citizen Live concert in New York’s Central Park.

‘It was a lovely meeting,’ Meghan said as the couple left the UN headquarters back then.

Meghan and Harry pressed for vaccine equity during the star-studded, 24-hour concert. It features performances staged in locations from New York to Paris to Lagos, Nigeria, and Seoul, South Korea.

The former Meghan Markle has been involved with the U.N. women’s agency, becoming an ‘advocate for political participation and leadership’ several years ago. Harry visited the children’s agency UNICEF at in New York in 2010.

Earlier this week, Harry and Meghan visited a New York City school, the World Trade Center’s centerpiece tower and the Sept. 11 museum, among other stops in New York.

During that visit, the couple were reported to have been recording footage for the Netflix documentary about their lives in the spotlight. 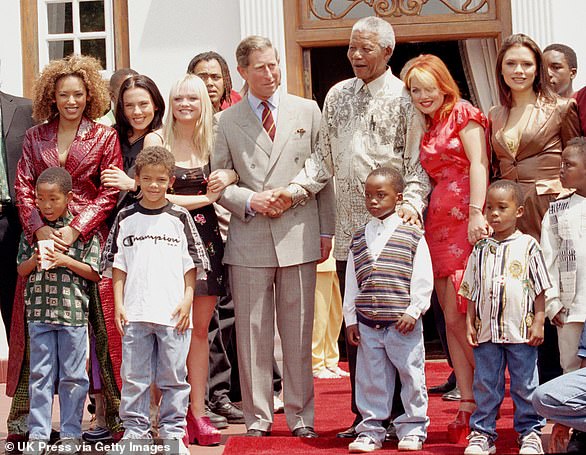 Nelson Mandela was arguably the world’s most potent symbol of the anti-apartheid struggle against thanks to his courage in the face of persecution.

He was known for trying to unite South Africa after its long history of division, and was affectionately known as ‘Madiba’, his clan name, meaning ‘grandfather’.

Mr Mandela guided South Africa towards multi-racial democracy, and was imprisoned for nearly three decades for his fight against white minority rule.

Upon becoming South Africa’s first black president in 1994, he said: ‘The time for the healing of the wounds has come. The moment to bridge the chasms that divide us has come. We have, at last, achieved our political emancipation.’

A year earlier, Mr Mandela was awarded the Nobel Peace Prize, which he shared with F.W. de Klerk, the white Afrikaner leader who freed him from jail.

He became a global advocate of human dignity, before officially leaving public life in June 2004, telling his country: ‘Don’t call me. I’ll call you’.

Mr Mandela, who defended himself at his own treason trial in 1963, married three times and had more than 30 children, grandchildren and great grandchildren.

He wed his first wife Evelyn Mase, who was a cousin of his political mentor Walter Sisulu, aged 26 – and they were married for 13 years, having four children.

His romance with second wife Winnie Madikizela-Mandela, who was 16 years his junior, began while he was on trial for treason.

He then married his third wife Graca Machel – widow of Mozambican president Samora Machel, who died in a plane crash – on his 80th birthday in 1998.

She already had six stepchildren and two of her own children, and helped him in his final years but admitted: ‘To see him ageing is something that pains you.’

Mr Mandela was treated in the 1980s for tuberculosis and had an operation to repair damage to his eyes as well as prostate cancer treatment in 2001.

After his departure from politics, Mr Mandela gradually stepped away from the public eye and made his last significant public appearance at the 2010 World Cup in South Africa.

His death came on the day the Duke and Duchess of Cambridge attended the London premiere of biopic Long Walk to Freedom, in which Mr Mandela was played by Idris Elba.

Mr Mandela died at home in December 2013 aged 95 after a long battle with illness.