Priti Patel was today blasted for refusing to appear before MPs to be grilled over the Rwanda migration plan, passport delays and Met Police failings – with the Home Secretary blaming ‘changes in the government’.

The Commons Home Affairs Committee was due to question Ms Patel this morning but she cancelled her attendance late yesterday afternoon.

She wrote to inform the committee of the decision shortly after ruling herself out of the race to replace Boris Johnson as Conservative Party leader, having spent days mulling over whether to stand.

Ms Patel cited ‘recent changes in Government’ and to her ministerial team as well as ‘wider unprecedented changes’ as the reasons why she was no longer able to attend the session, and asked for it to be postponed until September.

But Chairman Dame Diana Johnson said the excuse ‘didn’t make sense’ given she was ‘still the Home Secretary’.

The last-minute cancellation also sparked fury from committee members, with shadow home secretary Yvette Cooper accused the Government of being in ‘total chaos’. 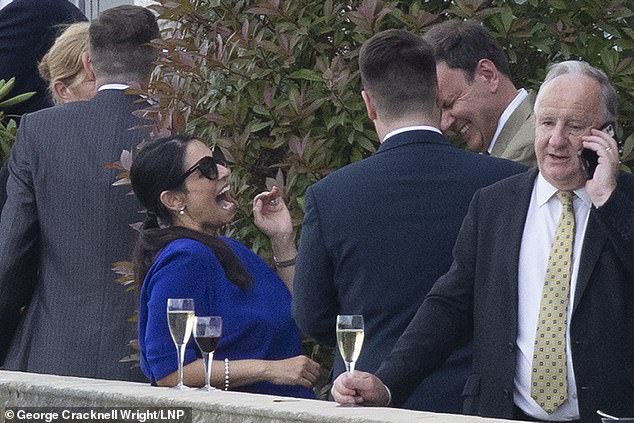 Paula Barker, Labour MP for Liverpool Wavertree, said: ‘Utterly appalling that the Home Secretary has declined to attend our session this morning. This Government is simply not functioning & hates being held to account. Totally unacceptable.’

Liberal Democrat home affairs spokesman Alistair Carmichael said: ‘If Priti Patel is so afraid to answer for her disastrous policies, maybe it’s time she dropped them.

‘Conservative ministers are clearly far too engrossed in political infighting to do their jobs. The British people deserve better.’

Ms Patel was due to attend alongside her permanent and second permanent secretaries, Matthew Rycroft and Tricia Hayes.

The committee said in a tweet: ‘This morning at 10.00am we were due to be questioning the Home Secretary, Priti Patel. She has declined to attend our session.’

In a letter to the committee, Ms Patel said scrutiny from its members is ‘always a priority for the department and me’, adding: ‘The committee will be aware of the recent changes in Government, and in particular to the ministerial team in my department. Regrettably, as a result of this and the wider unprecedented changes since I agreed to give evidence, I will no longer be able to meet with the committee tomorrow.

‘I apologise for the inconvenience caused to committee members and recognise the work your staff will have undertaken, but I would like to reassure you that I have asked my officials to establish a new date as soon after summer recess as is practical.’

Dame Diana Johnson said the news was ‘extremely disappointing’ when she wrote to respond today, adding that the committee expects Ms Patel to appear to give evidence next week as ‘the last available opportunity before the summer recess’. 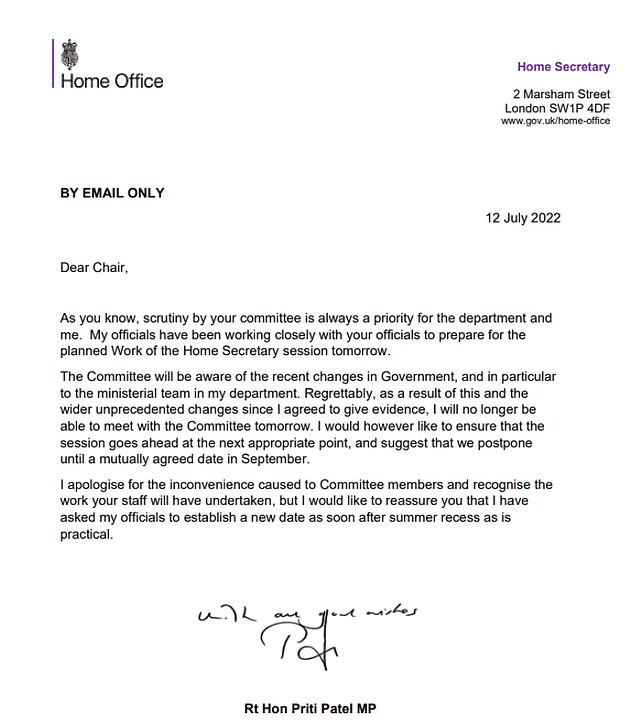 Ms Patel wrote to inform the committee of the decision shortly after ruling herself out of the race to replace Boris Johnson as Conservative Party leader, having spent days mulling over whether to stand

She said: ‘We have been given to understand that, despite the Prime Minister’s resignation last week, we still have a functioning Government in place, as signalled by the appointment of a number of ministers over the last few days, including in your own department. As such, it is essential that our committee is able to scrutinise the policy and actions of this Government, and, in these uncertain times, even more so.

‘You are still the Home Secretary and, in a statement you released last week, you implied that you did not resign from Government because you felt ‘the position of Home Secretary demands the holder of office to be entirely focused on the business of government and our national security’.

‘We agree that the work of the Home Office and the role of the Home Secretary are indeed vitally important. We would therefore ask why, a week on, you now feel it is acceptable to avoid a key element of the role – facing up to much-needed scrutiny of that essential work.

‘The ”business of government” absolutely requires scrutiny by Parliament.’

A Home Office spokesperson said: ‘The Home Secretary will appear at a later date, to be agreed with the committee.’

Yesterday officials revealed no further flights would leave for Rwanda until the Tory leadership contest is over.

Ms Patel was set to be asked about the programme in addition to failings at the Met, which is currently in special measures.

The Home Secretary has not said who she will be backing to become next PM, despite pleas from rivals on the Thatcherite right to unite behind one candidate.

But there are initial signs that MPs who had been in her group are shifting to Liz Truss. 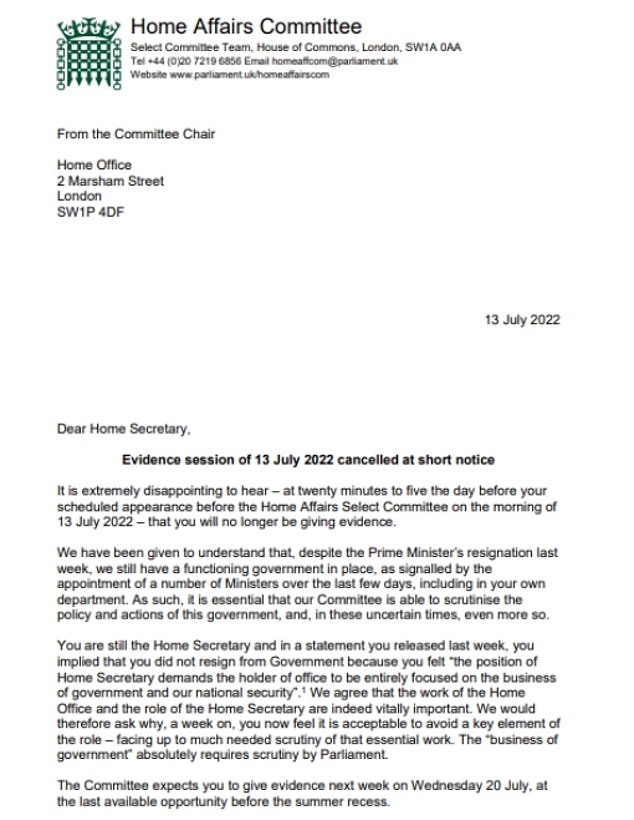 In a statement announcing she would not enter the race, she said: ‘I am grateful for the encouragement and support colleagues and Party members have offered me in recent days in suggesting that I enter the contest for the leadership of the Conservative Party. I will not be putting my name forward for the ballot of MPs.

‘As Home Secretary I have always put the security and safety of our country and the national interest first and my focus is to continue working to get more police on our streets, support our amazing security services to keep our country safe and control our borders.

‘As a lifelong and committed Conservative, I will always make the case for freedom, enterprise and opportunity and work with colleagues to deliver these values in Government.

‘Like all Conservative MPs and Party members, I will be listening to cases being put forward by the candidates standing for the leadership of the Party and trust the contest will be conducted in a good spirit that brings our Party together.’