The Royal Air Force’s fleet of Typhoon fighter jets have been grounded by a fault that may affect the working of the jets’ ejector seat, potentially leaving UK airspace unguarded.

The technical issue has also hit the Red Arrow aerobatics team, seeing all non-essential flying paused while ground crews try to understand the problem, the RAF announced on Twitter.

While the Red Arrows simply provide aerobatic display teams, the RAF Typhoons are tasked with protecting the airspace of the United Kingdom and the Falkland Islands, at a time of heightened tensions with Russia.

The alarming discovery comes on the same day that the Red Arrows lit up the skies across the UK on the final day of the Farnborough Airshow.

The team of daredevil pilots had a packed flight path, performing their trademark stunts and fly-passes across Farnborough, Leicestershire, Northamptonshire, Buckinghamshire, Oxfordshire and Hampshire.

The grounding now casts doubt over whether the Red Arrows will be able to perform at the Bray Air Display this weekend, just south of Dublin. 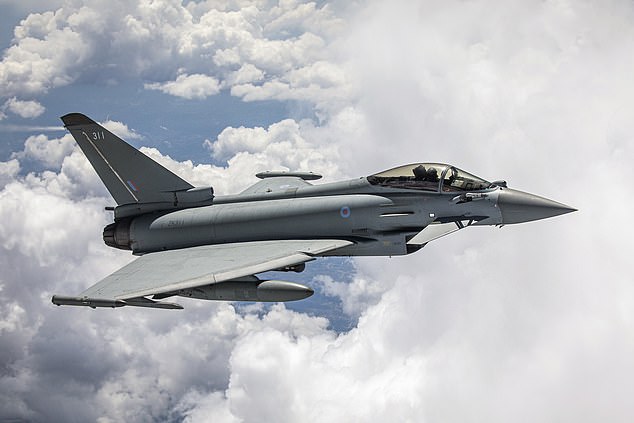 The Royal Air Force’s fleet of Typhoon fighter jets have been grounded by a fault that may affect the working of the jets’ ejector seat, 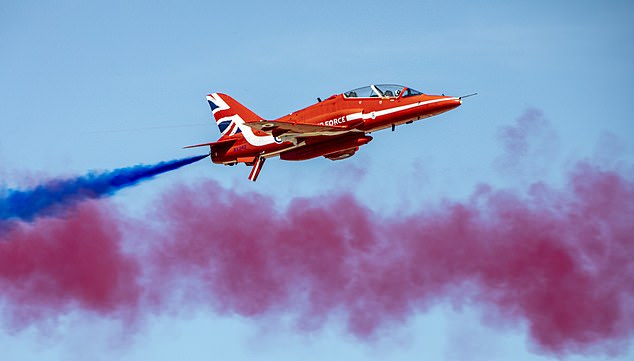 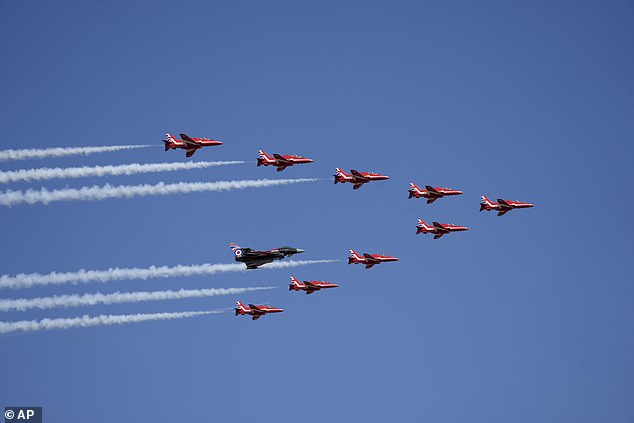 The Red Arrows flew from their home base at RAF Scampton in Lincolnshire today across the country. Pictured above: A view of the flyover by the Red Arrows, at the opening of Farnborough International Airshow four days ago

The pause is thought to be a temporary safety precaution but it will come as a worry to military chiefs, as the Typhoons are the backbone of UK air defence.

The aircraft came into service in 1994 and is a fourth generation multi-role combat aircraft that is regularly scrambled to see off approaching Russian aircraft probing UK response times.

The last time an RAF jet suffered a crash was on 20 March 2018, when a Red Arrows jet crashed shortly after takeoff at RAF Valley.

The pilot managed to eject successfully but the passenger, the leader of the Red Arrows’ dye team, was killed.

The Red Arrows fly in distinctive Hawk fast-jets and are meant to represent the speed, agility and precision of the RAF on a grand stage.