The world’s most powerful ute has finally arrived on Australia shores with three-times more grunt than the Toyota HiLux, and it’s prompted revheads to make their own classic advert – rallying against ‘nanny state’ commercials.

The Ram TRX, named after the Tyrannosaurus Rex, has made its debut Down Under, boasting a supercharged 6.2-litre Hemi V8, producing 523kW, 702 horsepower and 882Nm of torque.

Those figures see the TRX outperform every model in its class, even the new Ford Ranger Raptor – which Ram cheekily mock with an image of a T-Rex eating a Velociraptor in its interior.

The Ram TRX starts at an eyewatering $199,950 with additional on-road costs – more than double its rival Raptor.

The revheads at CarSales celebrated its introduction into the Australian market by creating a classic commercial for the TRX, an ode to the screeching tyres and roaring engines of car commercials from the past.

‘Car ads have become so sanitised in Australia. Gone are the days of high speeds, power slides and dust clouds performed to an equally epic soundtrack. The nanny state, naysayers and advertising watchdog have put a stop to that,’ the website’s spokesman Sam Charlwood said. 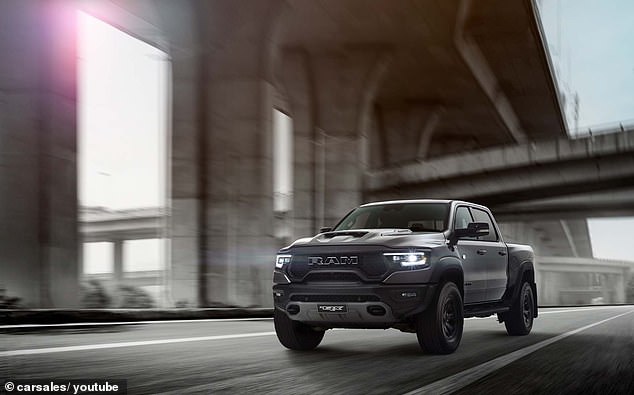 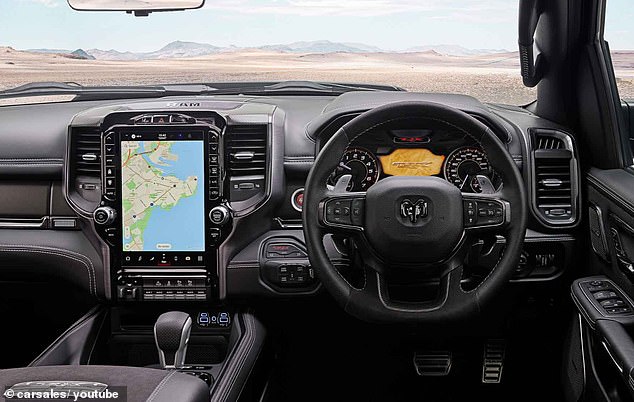 ‘So when an epic new car like the Ram 1500 TRX launches in Australia, you know it wasn’t going to get the promotion it deserves. So we’ve taken matters into our own hands.’

CarSales produced a clip they say ‘would make the makers of Holden’s VU SS Ute Thunderstruck TVC proud’, sliding and thrashing the brand new Ram through an empty straight and muddy forest.

The new model 1500 sees a wider chassis to fit its monstrous 325mm tyres, with a new bonnet scoop designed to increase airflow to the 6.2L supercharger. 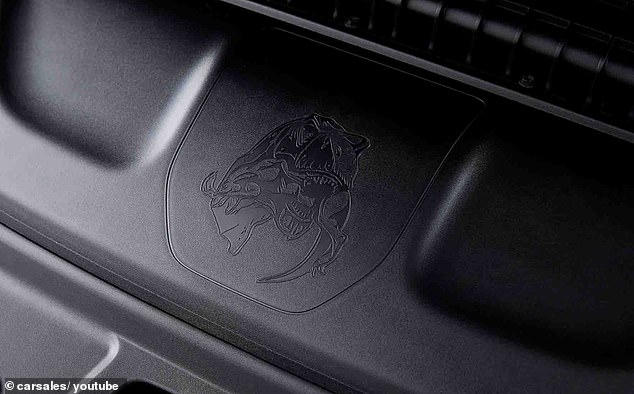 A 12-inch touch screen provides passengers with a number of features including the 19-speaker Harman Kardon stereo – which Ram describe as the ‘finest and most powerful audio system available in a pick-up truck’.

The TRX also features launch control and eight different drive modes, can reach 100mk/h in 4.5 seconds and has a top speed of 190km/h – despite weighing more than three tonnes.

The huge price is the result of Ram having to convert the ute from left-hand drive to right-hand drive for its Australian customers. 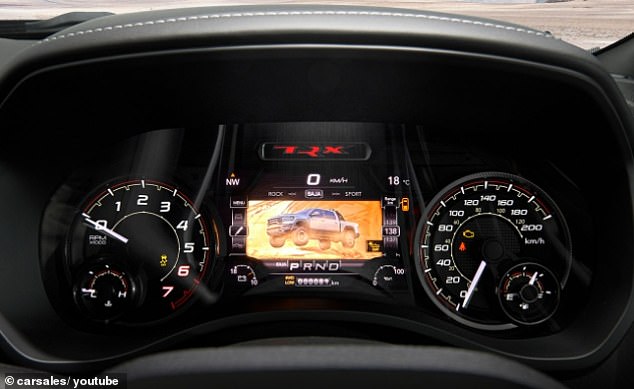 Rocking an imposing footprint and an enthralling growl, this is one truck that will be seen and heard, loud and clear. With a wider track, performance-tuned shocks, massive 35-inch tyres and a menacing stance, TRX asserts itself as the most muscular truck to ever leave the RAM factory,’ Ram say.

‘With its segment disrupting style, luxury, capability, technology, and performance the TRX defies convention and redefines what a pickup truck can be.’

The TRX is now available in all Ram showrooms in Australia.