International rap icon, Shawn Corey Carter popularly referred to as Jay-Z has released the tracklist of his forthcoming album, The Ascension”

On why he featured a good number of top African acts on the album, Jay-Z said he has always wanted to connect with his African roots. 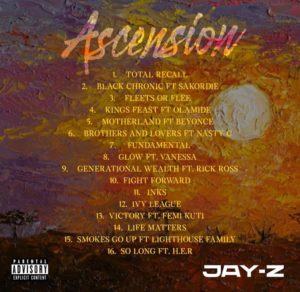 “I’ve always wanted to get in touch with my roots and connect to the motherland. You know, Africa is blessed with so much talent and I felt like it was time to tap into that resource. The Ascension is not just talking or focusing on Africa but it’s also about me giving back to the people, familiarizing with the culture and connecting more with the motherland.”

Jay-Z can be said to have followed the footprints of his wife’s (Beyoncé) last album “Lion King: The Gift” album, where she featured African stars like Burna boy, Wizkid, Tiwa Savage, Shatta Wale, and Tekno.

“The Ascension” album is set to be released in the coming weeks.