‘One of the most significant rulings in my lifetime’: Rev. Franklin Graham speaks out for pro-lifers on SCOTUS abortion ruling overturning Roe v. Wade; pro-choice actress Busy Philipps calls it a ‘sham’

Public figures have begun weighing in after the Supreme Court officially struck down Roe vs. Wade Friday morning.

More than half of all US states have some kind of abortion ban law that will likely now take effect following Friday’s news that Roe v Wade has been overturned by the United States Supreme Court.

Last month, a leaked Supreme Court draft opinion written by Samuel Alito and published by POLITICO revealed that the court voted to strike down the landmark 1973 ruling, which legalized abortion in the United States.

Alito wrote in part, ‘Roe was egregiously wrong from the start.’ The George W. Bush-appointed justice goes on to say that the issue of abortion should be returned to the ‘people’s elected representatives’ to decide.

The opinion was drafted in February 2022.

Public figures from both sides have been speaking out on the issue since the draft opinion went out and today was no exception.

The Reverend Franklin Graham tweeted: ‘The United States Supreme Court just announced one of the most significant rulings in my lifetime – officially voting to overturn the 1973 Roe v Wade decision because it was ‘egregiously wrong from the start,’ as stated by Justice Samuel Alito.

Busy Phillips, an actress and pro-choice activist who tweeted about having an abortion previously, wrote: It doesn’t end here. F**k this sham. F**k these people. If you’re a single issue voter and your issue is your taxes, f**k you too. This Supreme Court is on you.’

Sportswriter Clay Travis took a different tact:  ‘It’s a 6-3 decision, which is massively important for the safety of the justices in the majority. It means one conservative justice’s death won’t change the outcome. John Roberts made the right decision to sign on here.’

March for Our Lives co-founder David Hogg shared a poll showing record low confidence in the court and added: ‘The SCOTUS is destroying it’s legitimacy. The court in a major legitimacy crisis.’ 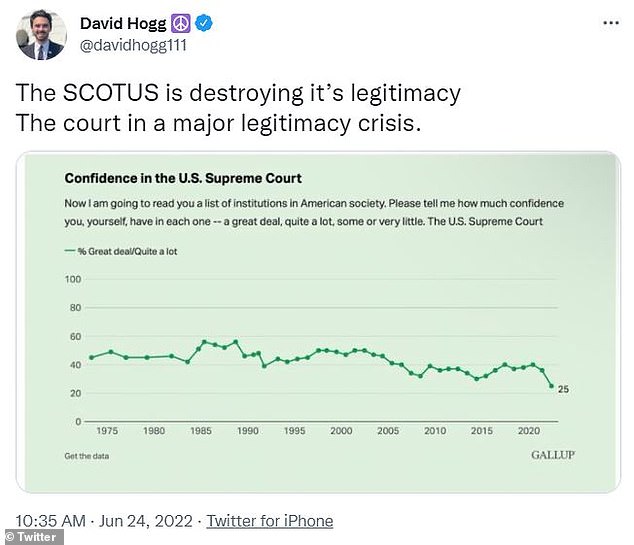 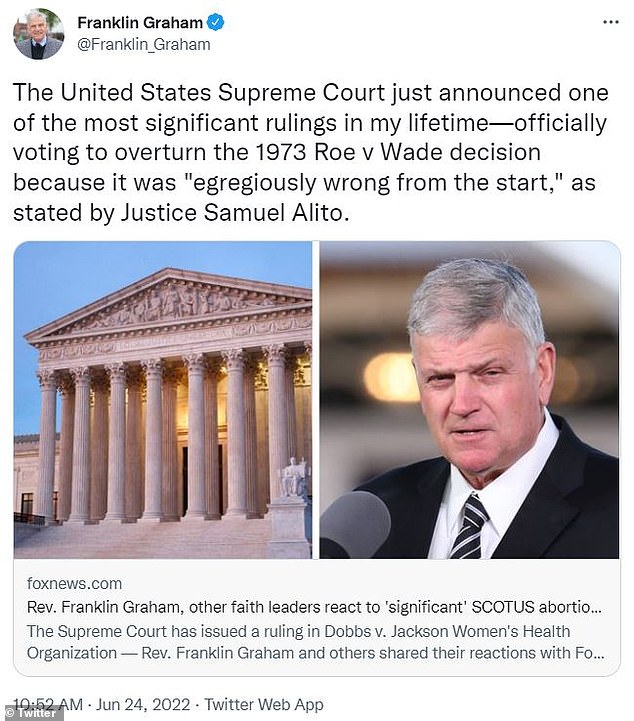