Ron Johnson’s new campaign ad takes a stab at Democratic opponent Mandela Barnes after his old tweets were dug up where he said Steve Scalise ‘took one for the team’ when he was shot at a congressional baseball game practice.

The digital ad also focused on crime, claiming that Barnes, who is currently the Lieutenant Governor of Wisconsin, wants to defund police and release violent criminals.

It also notes that the Democratic candidate trying to unseat Johnson ‘isn’t fit to be a senator.’

A deep dive into Barnes’ old tweets shows him tearing into Republican House Whip Scalise for not changing his thoughts on gun rights after being shot by a far-left extremist during a baseball practice in Virginia in 2017.

‘Taking one for the team,’ Barnes, who was not in office at the time, wrote on Twitter.

‘I question how people vote against self interest but this is next level. He literally almost died on this hill,’ he added of the Louisiana lawmaker. 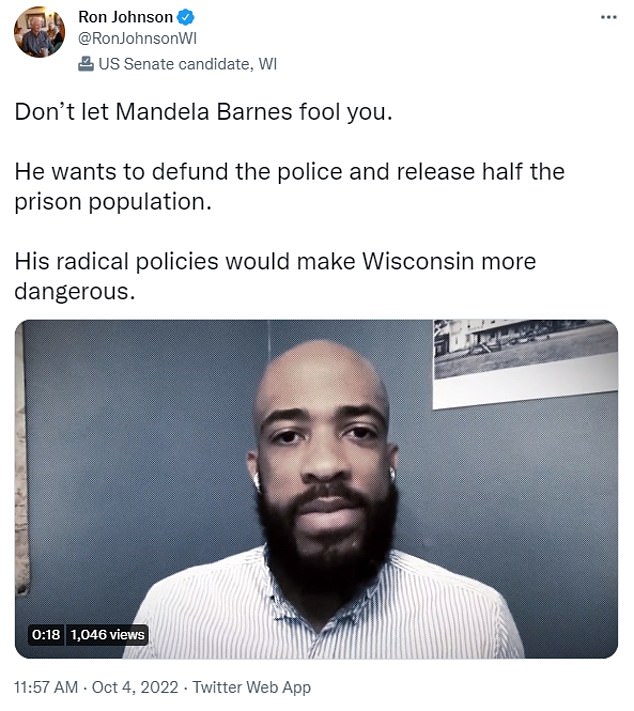 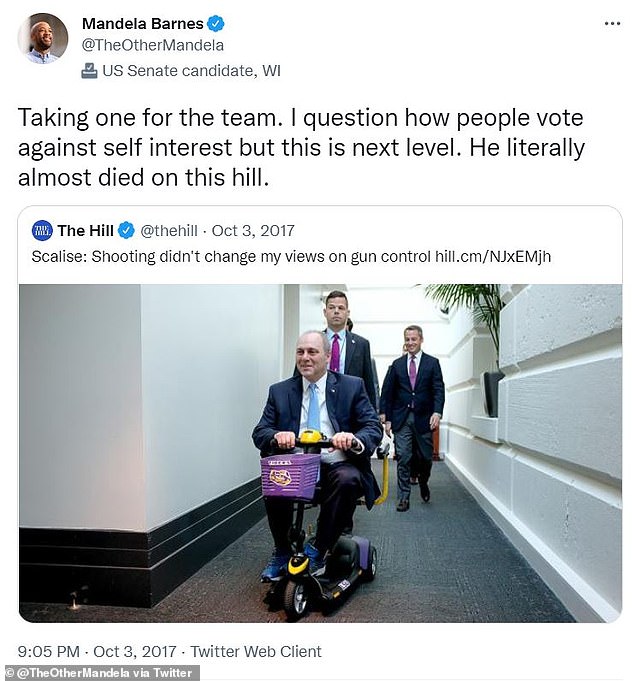 The ad attack came after a slew of Barnes’ old tweets were dug up, including one that claimed GOP Whip Steve Scalise was ‘taking one for the team’ after his views did not change on gun control legislation after he was shot and almost died during a congressional baseball practice in Virginia in 2017 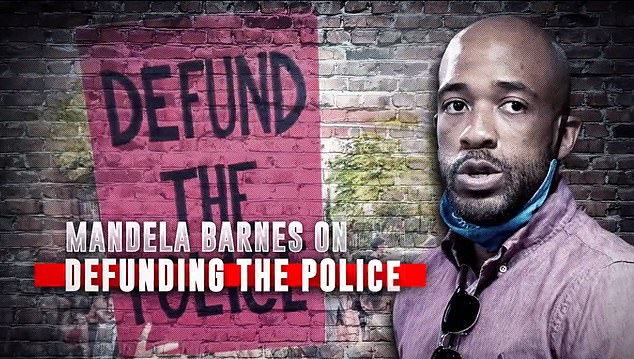 Scalise didn’t change his views on the Second Amendment after nearly dying from the gun-shot wound to his hip.

After being shown the tweet, Scalise told Punchbowl News: ‘That’s disgraceful. It says a lot more about his lack of character to be in essence condoning political violence. All of us should be standing up against political violence.’

‘To say something like that, [Barnes] really needs to look in the mirror and reevaluate his lack of character,’ he added.

Barnes said his reaction to Scalise’s pro-gun stance came from a ‘personal’ place of ‘frustration’ because he ‘experienced the pain of losing friends and loved one to gun violence.’

‘My comments came from a place of frustration with politicians like Ron Johnson who see gun violence happen everyday and turn their backs on solutions that would keep people safe,’ he said, bringing the issue back to Johnson rather than the GOP Whip.

Johnson has regained the lead in his campaign for reelection in Wisconsin in a consequential race that could decide which party controls the Senate for the second half of Biden’s term.

Registered voters in the state are 4 percent more likely to cast their ballot for Johnson rather than his Democratic challenger and the state’s Lieutenant Governor Mandela Barnes in a 48-44 percent split, according to a new Fox News poll. 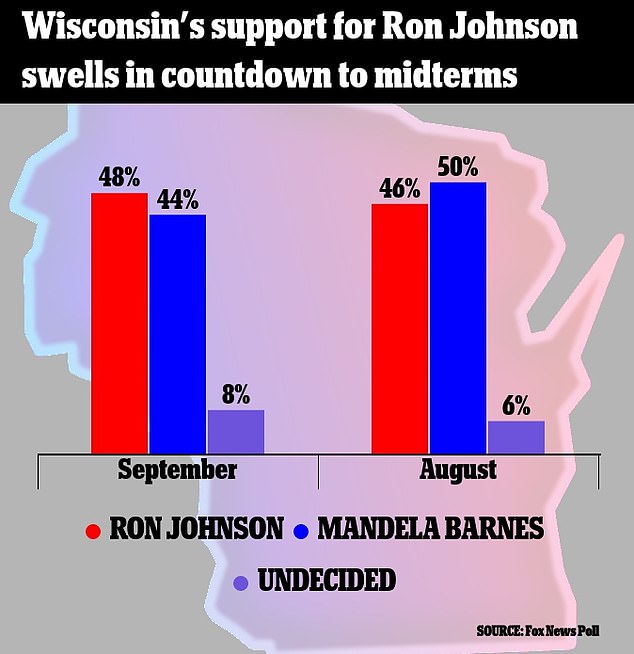 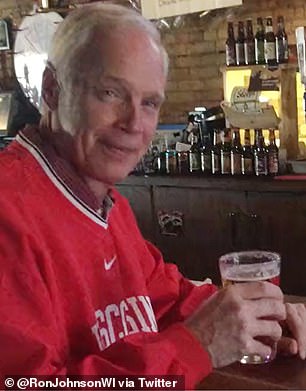 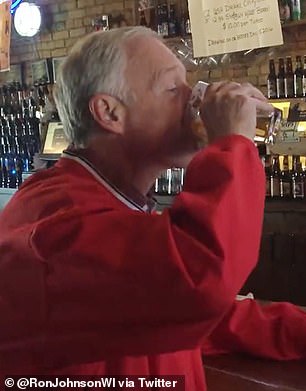 Incumbent Senator Johnson is leading Barnes by 4 percentage points, according to the new poll, after trailing him by 4 points in the same poll taken in August. Pictured: Johnson’s campaign Twitter posted a video of him  taking a swig of beer and saying, ‘Happy National Drink Beer Day!’

The September poll results come with just 39 days left until the 2022 midterms. Eight percent of respondents said they are undecided or are not voting for either candidate.

Mandela also shared some other questionable thoughts to his Twitter, like in February 2017, Barnes claimed that President ‘Donald Trump is a Russian spy. Believe me.’

He also said in July 2018 that progressive New York Representative Alexandria Ocasio-Cortez became ‘my president’ when she used common slang ‘chopping it up’ to describe her chatting with people during a morning in the city. 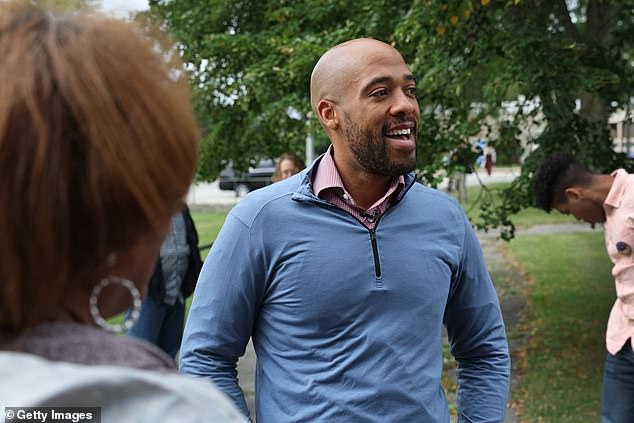 Wisconsin Lieutenant Governor Barnes (pictured speaking with supporters on September 24) has shared some other questionable thoughts to his Twitter, including that then-President ‘Donald Trump is a Russian spy’ and that AOC is ‘my president’

The gap between the two candidates is still quite slim, especially with the poll’s margin of error of plus or minus 3 percentage points.

It is a flip for Johnson, however, who was falling behind Barnes in the same poll conducted in August.

The 35-year-old Lieutenant Governor held 50 percent of the vote in the Fox News poll last month compared to Johnson’s 46 percent. Only 6 percent of voters were undecided in that polling.

‘Wisconsin continues to be one of the most closely divided states in the country,’ Democratic pollster Chris Anderson said. ‘Republicans appear to have some momentum in both the Senate and gubernatorial races, but they are both competitive as we head into the final month of campaigning.’

Wisconsin is a key battleground state that swung blue in the 2020 presidential election with a less than 1 percent margin between President Joe Biden and former President Donald Trump.